In this scouting report, Brad Gough breaks down Jurgen Locadia’s strengths and weaknesses and how he will fit in FC Cincinnati’s system.

Jürgen Locadia is a nearly 6-foot-2, 194-pound forward that plays mostly through the middle as a No. 9, though he can also play on the wing. In 527 minutes with Hoffenheim of the Bundesliga this season, he has tallied four goals. This has been considered a “down” season for the Dutchman, not because of his goal output but because of his lack of playing time. To put his goal-scoring record in perspective, if he keeps the same rate in MLS he would average around two goals every three full matches he plays.

When I watch Locadia play, I see a player that is relatively fast — though not a burner. He is very adept at using his body to shield the ball while turning and thus draws a lot of fouls. He is a good finisher, though favors his right foot heavily.

Locadia has feather-soft feet. He can receive the ball from a variety of angles and speeds and seems to always find a way to cushion it down to his feet or to a teammate. This being said, he does not position his body well on the half-turn while doing this, so most of the time he is facing away from goal and forced to play the ball backward rather than being able to turn and create a shot. Though he is not turning and creating key passes or shots himself, he very rarely gives the ball away when playing in between the lines.

Most of Locadia’s goals come from being played through so that he is running alongside defenders or from one-touch situations inside the box. When running with defenders, he can use his speed and strength to keep the ball and has good enough change of direction to cut the ball back, leaving the defender and creating space for a shot.

In my view, Locadia’s best characteristic is his movement. In the middle third, he is constantly changing angles and finding “windows” between defenders to offer a penetrating pass. He loves to stand offside (a la Sergio Aguero), baiting the defenders to drop with him or making it difficult for them to track him. In the box, he expertly drifts away from defenders before darting in front of them to create opportunities for his teammates to cross. Take this example from a recent match against Augsburg: 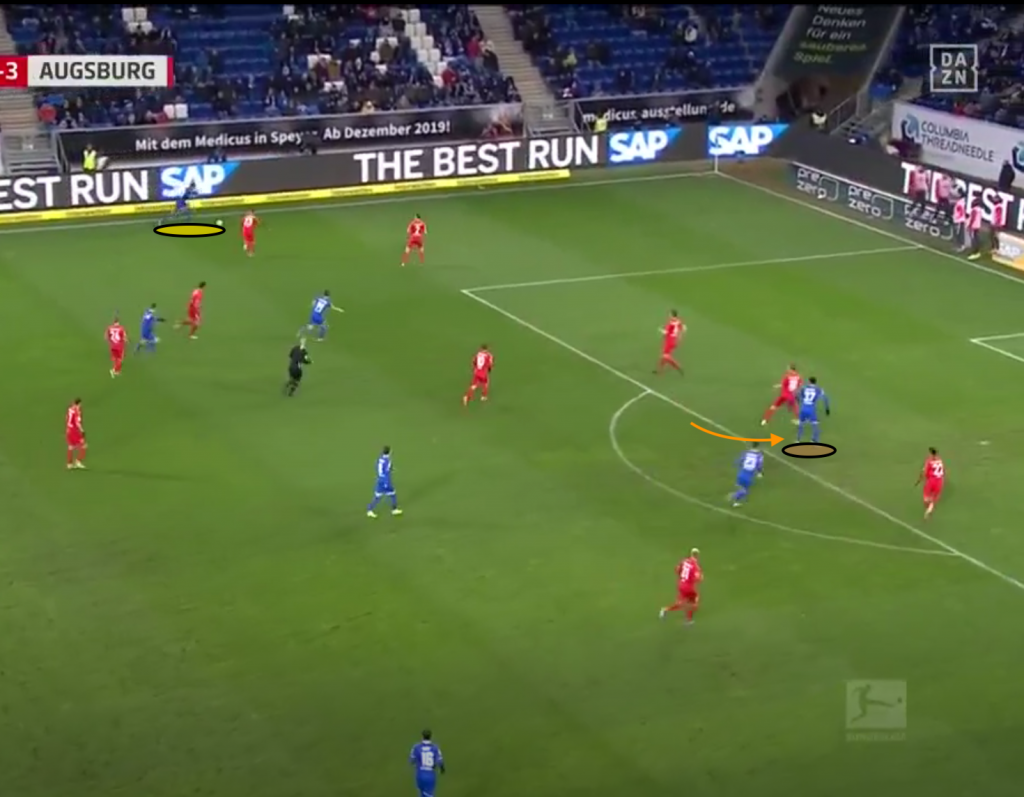 Locadia sets his defender up by drifting behind him. This causes confusion in the defender as he copes with trying to watch the ball and his mark. The defender attempts to drop deeper to be able to do this. 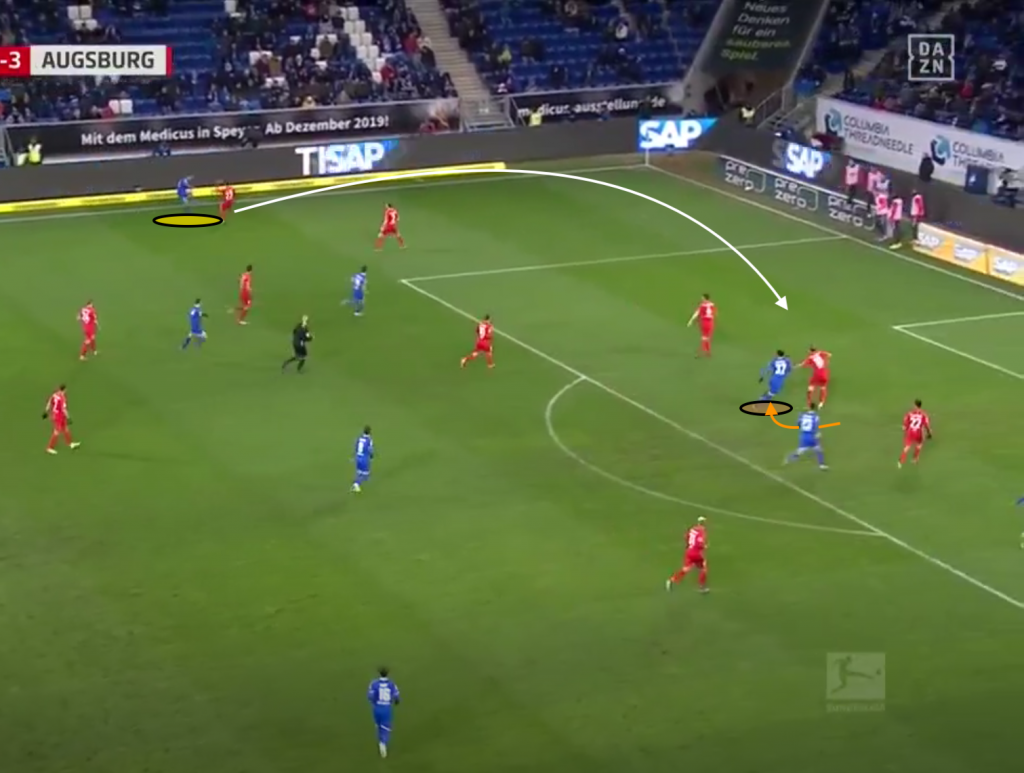 As his teammate shapes to cross, Locadia uses the extra depth of the defender to dart in front of him. He is now ball-side and thus an easy target for his teammate to pick out with the cross. 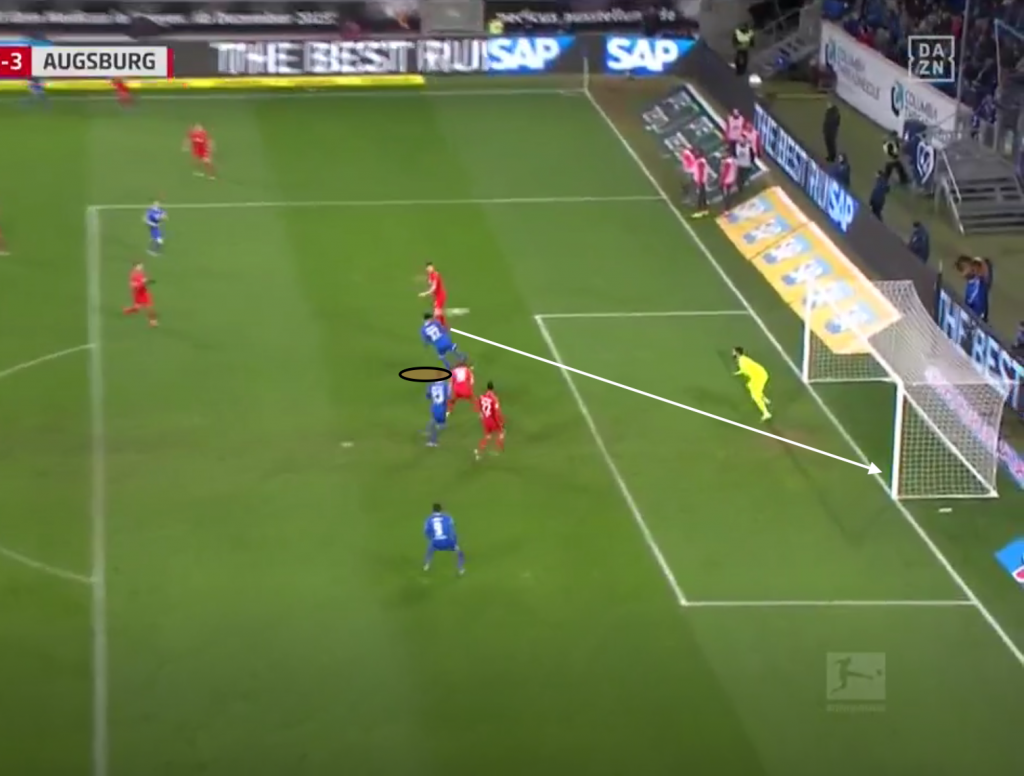 With a great delivery, Locadia is unchallenged for the header and is able to flick the ball far post for a spectacular goal.

Locadia is not entirely reliant on service to score, but he’s not going to run at defenders and create opportunities often. Therefore, Locadia is going to need some playmakers around him to get him in space or provide the service he needs in and around the box. Because of his excellent movement, impeccable timing between Locadia and his teammates will be important. I wouldn’t expect Locadia to score a ton of goals to start, but his scoring will pick up as he becomes more comfortable with his teammates.

His ability to maintain possession while checking back for the ball (between the lines) makes him an excellent option for a team that wants to use their No. 9 as a target player but then shift the ball wide. I would expect FC Cincinnati’s main route forward to be through the width rather than through the center when Locadia is on the field.

Don’t forget to download  the latest Cincinnati Soccer Talk podcasts. Subscribe on your favorite podcast network to be sure you never miss an episode!