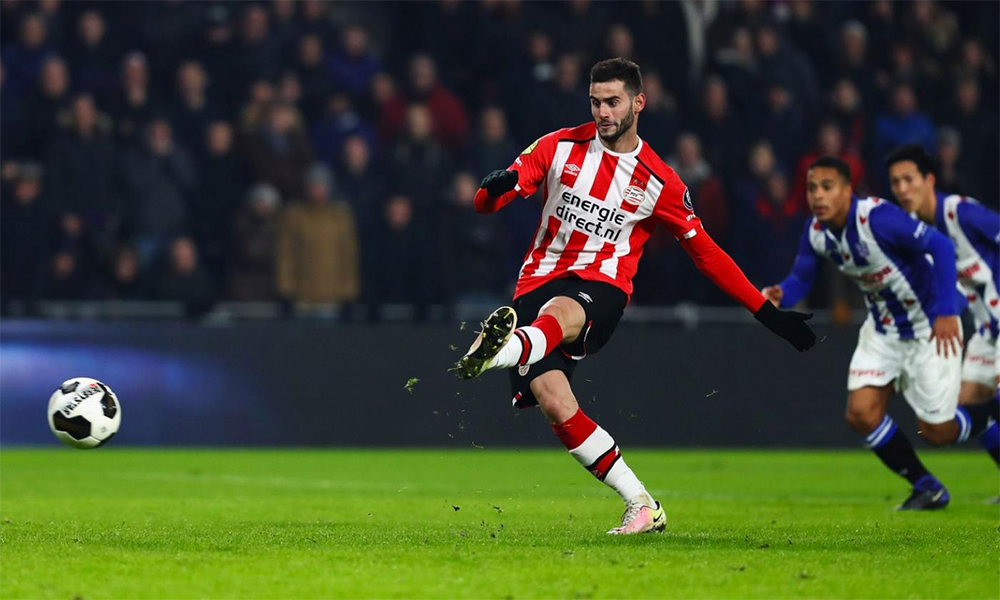 The offseason rumor mill continues to swirl as reports indicate FC Cincinnati have been linked with the signing of Gaston Pereiro of PSV Eindhoven.

SBISoccer.com Editor-in-Chief Ives Galarcep reported on Friday that FC Cincinnati is lining up a move for Uruguayan attacking midfielder Gastón Pereiro of PSV Eindhoven. Galarcep’s tweet came after a report from ESPN’s Taylor Twellman that the Orange & Blue has been heavily active in recruiting a #10 from South America.

Those wondering who @TaylorTwellman was hinting at when he said #FCCincy was looking at a South American number 10, I'm told Cincinnati is lining up a DP move for Uruguayan Gaston Pereiro from PSV. Skilled 24yo would be a good signing if Cincy can get it done #MLS

Cincinnati Soccer Talk has learned from sources that the club has shown heavy interest in the player and would like to make him a Designated Player should the club and player agree to terms.

SoccerNews.nl, a Dutch based soccer website, has confirmed that an offer from FC Cincinnati has been received by PSV and it is now up to Paco Casal, the agent of Pereiro, to agree to the transfer.

Details of a potential deal are not known, but it may take a large offer to PSV to land the Montevideo born playmaker during the Winter Transfer Window. The likelihood of a deal is unknown at this time as Pereiro is out of contract in June and reports from his agent indicate that they hope to look for a new club at that time.

ACF Fiorentina and Cagliari Calcio in Serie A have also been linked to the player while Spartak Moscow had issued a $15 million bid for Pereiro over the summer. PSV purchased the 24-year-old in 2015 for a reported sum of less than $8 million. It would be in the Dutch clubs’ interest to work out a deal this winter to realize any financial return on the player.

Additionally, a photo indicated that club president Jeff Berding, head coach Ron Jans and general manager Gerard Nijkamp were in Europe on a scouting trip in December. A photo from the trip shows Jans, Berding, and Nijkamp scouting a new signing, however, the site of the photo is unknown. It is unknown, but a source has suggested to CST that the group was recruiting the Uruguayan international.

The Athletic’s Laurel Pfahler has also reported on Twitter that the playmaker does not have a deal completed with FCC, but is a target of the MLS side.

Clarifying, this is not done. It’s just a target, from what I’m told. #fccincy https://t.co/O3u8PaT4mG

Pereiro’s value may be depressed at this point as he is coming off an injury. After returning from a broken collarbone in November, the Uruguayan has scored two goals in six matches across all competitions. Pereiro will not be featuring in the clubs friendly matches this week as PSV does not view him in their plans and hope for a transfer during this period.

The playmaker has an impressive track record in the Netherlands scoring 49 goals and logging 21 assists in 154 appearances for PSV. He has also been capped 10 times for Uruguay scoring on four occasions.

Pereiro is a major part of the Uruguayan National Team who will take part in the new version of Copa America this Summer. It is important that he plays to maintain his spot with La Celeste and staying at PSV does not look like a possible solution.

CST is still skeptical as Pereiro has been linked to the Italian clubs recently and England’s Watford over the Summer. If FC Cincinnati can complete this signing, it may go down as the biggest deal of the offseason and back up the ownership’s comments of putting a quality squad out this season.