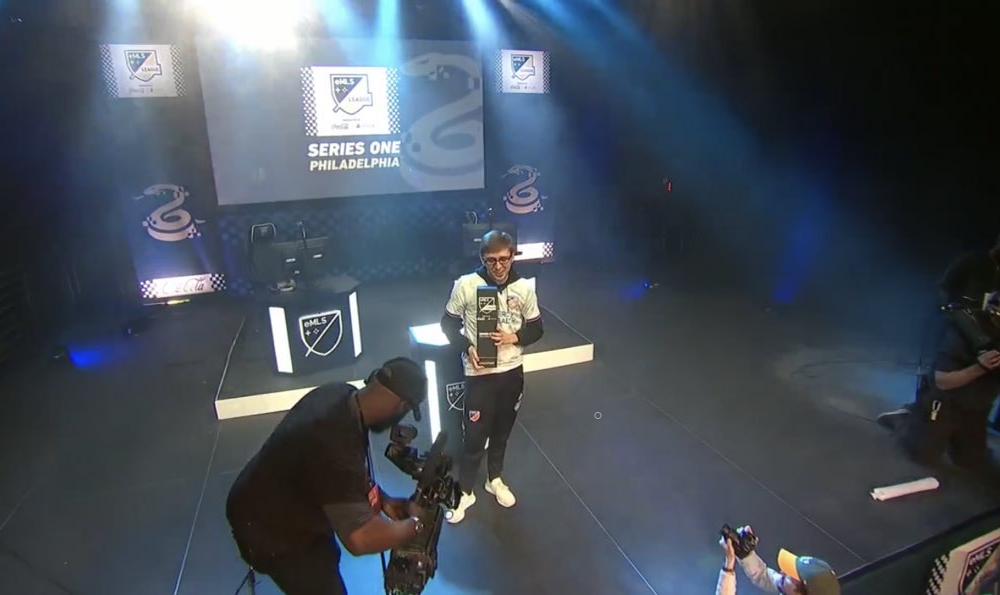 FC Cincinnati’s eMLS representative Fiddle (Gordon Thornsberry) came back from the brink of elimination twice to win the 2020 League Series One event on Friday.

FC Cincinnati’s eMLS representative Fiddle (Gordon Thornsberry) came back from the brink of elimination twice to win the 2020 League Series One event on Friday. The pro-gamer had a memorable night filled with suspense and excitement on his way to claim his first eMLS title.

“It means a lot to me,” said Fiddle after Friday’s event to CST. “Grew up in this city and to win a trophy under the city’s name means more than I could ever imagine”

Fiddle began the event well on Thursday going 9-2-1 in regular season play finishing in a tie for first in eMLS. Due to goal differential Thornsberry was seeded third and would be paired up against the 4th ranked FIFA player in the world, Paulo Neto representing Atlanta United FC.

The Cincy man began his quarterfinal match going up 1-0 on the Brazilian Neto. Using a possession-based strategy, Fiddle had the ATLUTD representative on his heels for the first half of the match. Neto struck back with a sublime goal passing around the future champ to lock the match at 1-1. The game would be put to Fiddle, but with a little luck and some clutch defending it ended in a draw after extra time. The eMLS players began PKs, missing each of their first two tries, with Fiddle converting on his third. Fiddle, needing his fifth attempt to win,  converted using Dutch legend Ruud Gullit to advance.

😱 WHAT. A. SHOOTOUT. 😱@FiddleGT ADVANCES to the SEMIFINALS after a back-and-forth thriller against Paulo Neto! pic.twitter.com/msJDqGyDMJ

In his semi-final match, Thornsberry would be paired against eMLS newcomer exraa. The Vancouver player had been playing some of his best FIFA going into the match and dominated going up 2 goals over Fiddle early into the second half. Fiddle, forced to change his strategy brought in Orlando City’s Nani and took it to exraa. Thornsberry converted a chance with fifteen minutes to go in the match to give him an opportunity which lead to a thrilling game-tying goal in the 87th minute.

The Vancouver eMLS’er put two goals past Fiddle early into extra time and all had seemed lost. In what was the most thrilling several minutes of the event, Fiddle again came back and scored two goals, one on the last play of extra time to force PKs. Fiddle was denied on his first attempt but gained the upper hand winning 4-3. After the match in a humble moment, Fiddle remarked that exraa “was the better player” in their match. A sign of respect to Fiddle’s friend and training partner.

In the Final, Fiddle was faced against another first-time finalist, George Adamou of the New York Red Bulls. Fiddle remarked that they have not played each other much and was excited for the opportunity. He converted in the second minute of their match and never looked back in what was his most dominant performance of any player on the night (sorry Jay Ajayi). Fiddle smoked Adamou 3-1 in a match that was much more dominated than the scoreline showed.

The #eMLS League Series One champion is @FiddleGT representing @fccincinnati winning $7,500 and a the🏆 pic.twitter.com/cJ8rJypWcF

By winning League Series One, Fiddle took home a $7,500 cash prize, a trophy. He will look to defend his crown in League Series Two, set to take place on Feb. 15 in Portland. Fiddle and the other 24 eMLS gamers will compete for the league’s ultimate prize, eMLS Cup, at SXSW in Austin on the weekend of March 20.