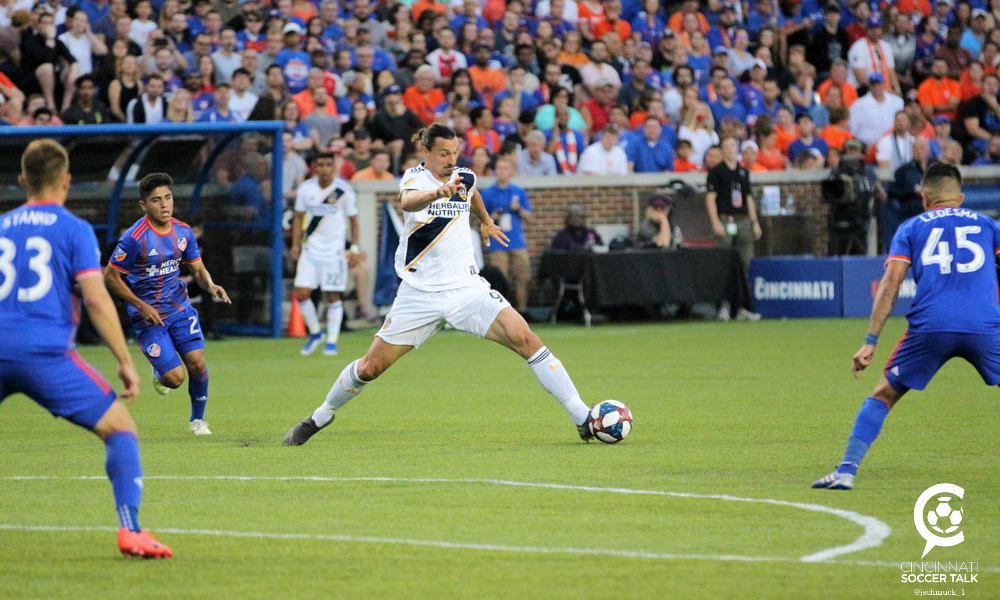 Zlatan Ibrahimovic and the LA Galaxy start the playoffs at Minnesota United on Sunday.

The regular season has come and gone, and now 14 teams are focused on the task at hand, capturing the MLS Cup. Last season, Atlanta United were the ones hoisting the cup and this year are looking to repeat as champions. The Five Stripes kick off their quest to repeat Saturday as they host the New England Revolution. These two teams faced off on Decision Day, which saw Atlanta United knock off the Revolution 3-1 at Mercedes-Benz Stadium. This is the first playoff matchup between these two teams. Overall, in three tries, the Revolution have yet to knock off the Five Stripes at Mercedes-Benz Stadium, being outscored 12-2. The winner of this match will face either the Philadelphia Union or New York Red Bulls in the Eastern Conference Semifinal.

The next matchup sees FC Dallas head to the Pacific Northwest to face the second-seeded Seattle Sounders. These two teams are familiar foes in the MLS Cup playoffs. Both teams enter this match on different paths. The Sounders were confirmed to be headed to the playoffs for what seemed like a while. On the other side, FC Dallas needed a victory on Decision Day to book its place in the playoffs. Now these two teams will battle for a spot in the Western Conference Semifinal. This season, these two played to a scoreless draw in Seattle, and in Frisco, Texas, FC Dallas came away with a 2-1 win. This will be the fifth playoff matchup between these two teams. At Century Link Field, the Sounders own the series against FC Dallas, going 9-1-1 and outscoring them 29-8.

Next up is a big matchup north of the border. D.C. United heads to Toronto to face Toronto FC at BMO Field. In the two games between these two teams, no team came away victorious. In Toronto, they battled to a 0-0 draw and the return leg was not much different as they tied 1-1. These two have never met in the playoffs, but D.C. United has the advantage in the overall series in Toronto, going 8-6-3, but lately, Toronto FC has been the team on the rise.

The Portland Timbers were in a battle all season long and locked up a playoff spot on Decision Day after knocking off the San Jose Quakes. The Timbers are certainly battle-tested and will need that experience in their first-round matchup against Real Salt Lake. This year Portland swept the season series against RSL, knocking it off 2-1 and 1-0 respectively. Real Salt Lake earned the third seed in the West and will look to continue its solid play in this matchup. In the playoffs, these teams have faced off twice, with RSL winning both. This will be a tough test for the Timbers, who are looking to knock off RSL for the third time this season.

The final match in the Eastern Conference sees the sixth-seeded New York Red Bulls heading on the road to face the third-seeded Philadelphia Union. The Union are looking to win their first MLS Cup Playoff victory. These two teams split the season series after the Union knocked off the Red Bulls 3-2 at home. The return leg at Red Bull Arena saw the Red Bulls come away with a 2-0 victory. The winner earns a date with either Atlanta United or the New England Revolution in the Eastern Conference Semifinals.

The final matchup on the opening weekend sees the LA Galaxy head east to face Minnesota United at a crazy Allianz Field. This will be the first playoff match in the short history of Minnesota United, and the atmosphere at Allianz Field will reflect that. Both teams are coming into this game with little momentum. Both suffered losses on Decision Day, which affected their playoff positioning. This season, after a 0-0 draw at Allianz Field, the LA Galaxy captured the season series with a 3-2 win at Dignity Health Sports Park. While a playoff victory is fantastic, the winner will face off against Los Angeles FC.

Stay tuned to Cincinnati Soccer Talk as we take a look at the offseason ahead for FC Cincinnati.