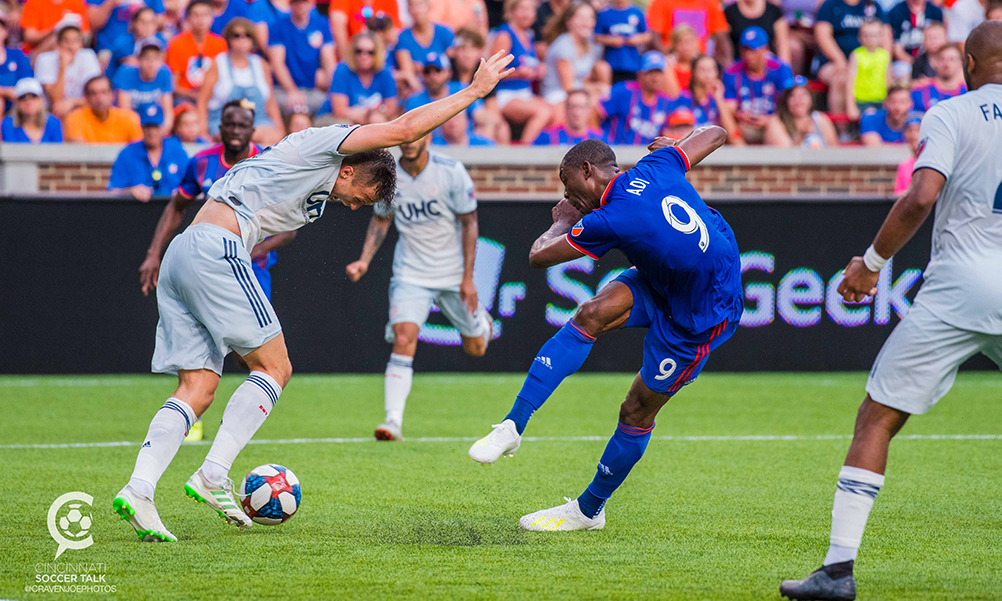 In a letter to the editor, Clay Winstead writes that Fanendo Adi’s current situation with FC Cincinnati is the final act of a tragedy.

Editor’s note: The following letter to the editor was submitted by Clay Winstead and published with minimal editing.

Before FC Cincinnati’s first season in Major League Soccer could end, we saw their relationship with Fanendo Adi come to its dramatic fever pitch. As reported by Laurel Pfahler of The Athletic, Adi, the club’s first MLS (designated player) signing, filed a complaint with the Major League Soccer Players Association claiming to be mistreated by the club. In short, Adi disputes the reports that he’s unfit to play and alleges club management has purposefully kept him out of games to prevent him from earning a contract bonus. This complaint explicitly signals the deterioration of the relationship between club and player. I’m sure many fans will view this evolution as a welcome relief; a hopeful end to a toxic situation and justification to move on from him this offseason. For me, this isn’t relief, it’s the last act of a tragedy.

I can recall the afternoon of July 30, 2018 when FCC officially announced the signing of Fanendo Adi, and what my childhood best friend, now an Oregon resident and Portland Timbers fan, texted me that day: “Congrats man. You’re getting a top class striker when he’s in form. He can be frustrating tho. But he’ll make an impact immediately.” I suddenly became very excited and I believe a lot of FCC fans had the same enthusiasm around the first big signing. We were getting a veteran striker to lead the attack; our own talisman. And to hear a trusted friend, who spent years watching Adi play in Portland, expressing his excitement for the signing affirmed my good mood. FC Cincinnati were in the beginning of an incredible 23-game unbeaten streak to end their final season in the United Soccer League, and were preparing to ascend into the major leagues. Unfortunately, FCC are far from ascendant these days. While there have been a few glimmers of hope for the club in recent weeks, this season has been filled with more than its fair share of bitter disappointments. Many fans would count Fanendo Adi’s year on and off the pitch to be the most bitter of all. His OVI citation aside, I have been a tireless Adi apologist and defender. I would like nothing more than to rant about FCC’s decision to invest in Adi but refuse to build a roster around his strengths, or cite advanced statistics to argue he’s performed better than many believe, or decry his status as a scapegoat for the team’s broader issues. But all of that hides what I’m truly feeling: disappointment and sadness over what could have been.

I’ll never forget the tifo we displayed over the Bailey for his first game: “Cincinn-Adi Here We Go.” And I still remember the first time he scored for the orange and blue. He came on late against the Pittsburgh Riverhounds, and with only minutes to spare put the winning goal into the bottom right corner. It was the perfect Fanendo Adi goal. He fights off one defender, cuts inside another, and drills a brilliant finish off his left foot. He celebrated by running directly to the bench, gave head coach Alan Koch a big bear hug, and lifted him off the ground.

But I never expected my relationship with Adi to hit its peak that night. No one could have foreseen his suspension, or his injury struggles, or the rift that has formed between him and club management. I’m not sure who to believe. This isn’t the first time a player has filed a complaint regarding fitness disagreements and contract issues against FCC; you only have to look to the Tommy Heinemann situation last year, in which there are more than a few similarities. But with the club refusing to litigate the issue through the press, there’s no way of knowing whether Adi has a legitimate grievance or committing a petty cash grab on his way out. However this complaint gets resolved, it doesn’t change the fact that Fanendo Adi’s time at FC Cincinnati has fallen short of expectations. What depresses me the most is I still believe a healthy Adi, surrounded by teammates who compliment his skill set, could still be an incredible player for this team. And it breaks my heart to know he’ll likely never wear the orange and blue again.