Brad Gough breaks down nine-man FC Cincinnati’s defensive performance in the second half Sunday at D.C. United that resulted in a 0-0 draw.

Defending with nine players is impossible. That is unless the opponent fails to adjust to the way you are defending. The key then is to prevent your opponent from playing the way that they want, then change the plan just as they figure it out.

Ron Jans and the FC Cincinnati nine that held playoff-bound D.C. United scoreless on Sunday did exactly that. They took a game plan to prevent penetration between the lines when playing 11v11, and successfully adapted it to playing 9v11.

It was evident from the kickoff that FC Cincinnati’s game plan was to prevent D.C. United from playing between the lines. Last week I wrote how the midfield rotation was successful in limiting Orlando City’s offense. Without Allan Cruz and Frankie Amaya this week, Jans showed tactical flexibility by changing from a 4-3-3 with a fluid midfield triangle to more of a 4-1-4-1 with a solid base of two holding midfielders.

What this looked like for most of the first half was Caleb Stanko pressuring the ball in the midfield and Fatai Alashe and Leonardo Bertone marshaling Lucas Rodríguez and Paul Arriola while D.C. United shifted the ball side to side as below. 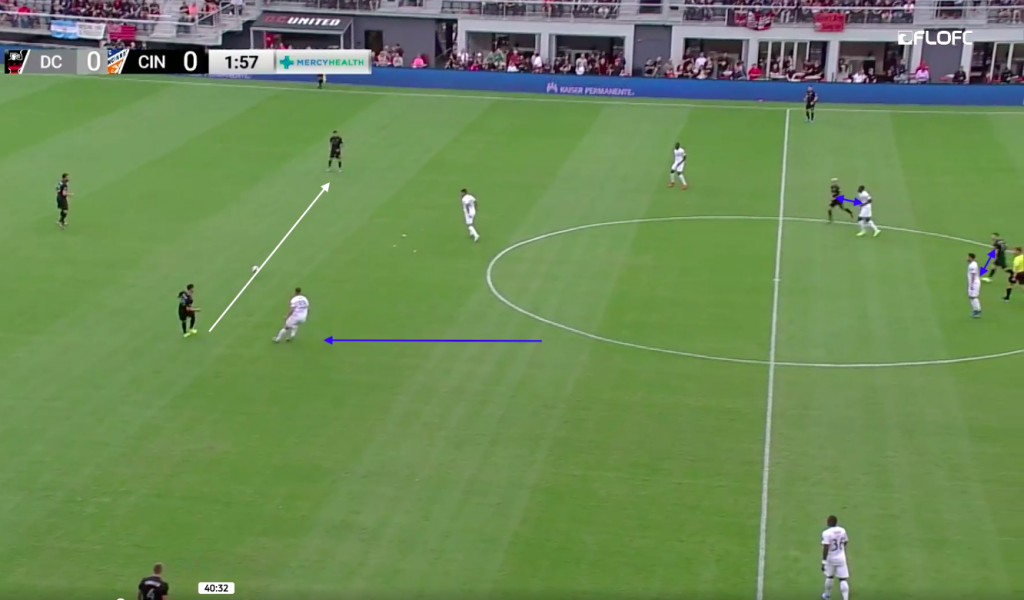 Here Rodriguez checked into the backline to try to get on the ball, but Alashe and Bertone continued to deny penetration and leave Emmanuel Ledesma and Stanko to sort out who would pressure the ball. 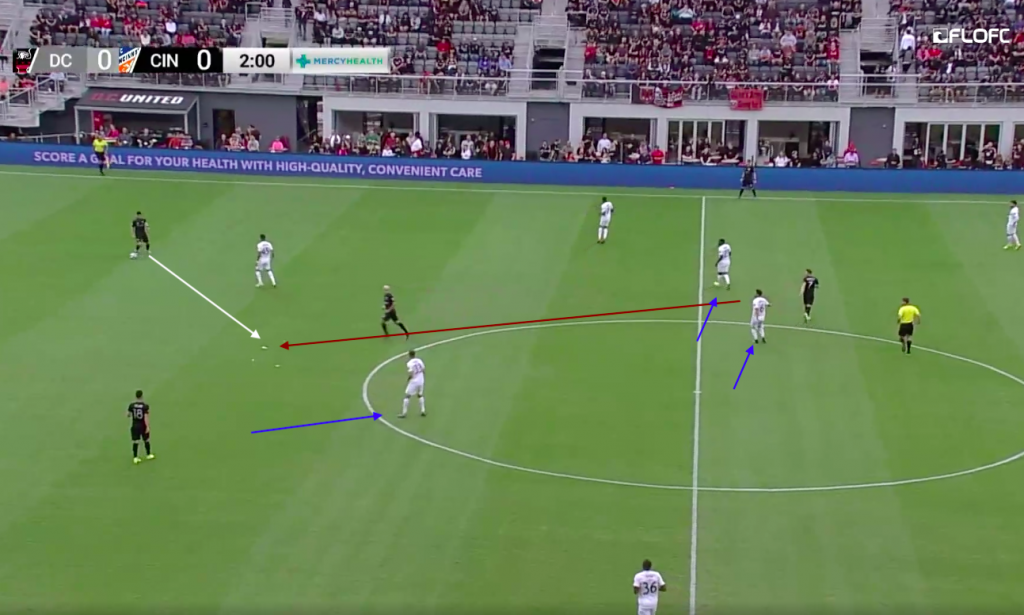 D.C. United continued to try to shift the ball back and forth while Bertone and Alashe stayed disciplined in limiting Arriola’s attempt to play between the lines. 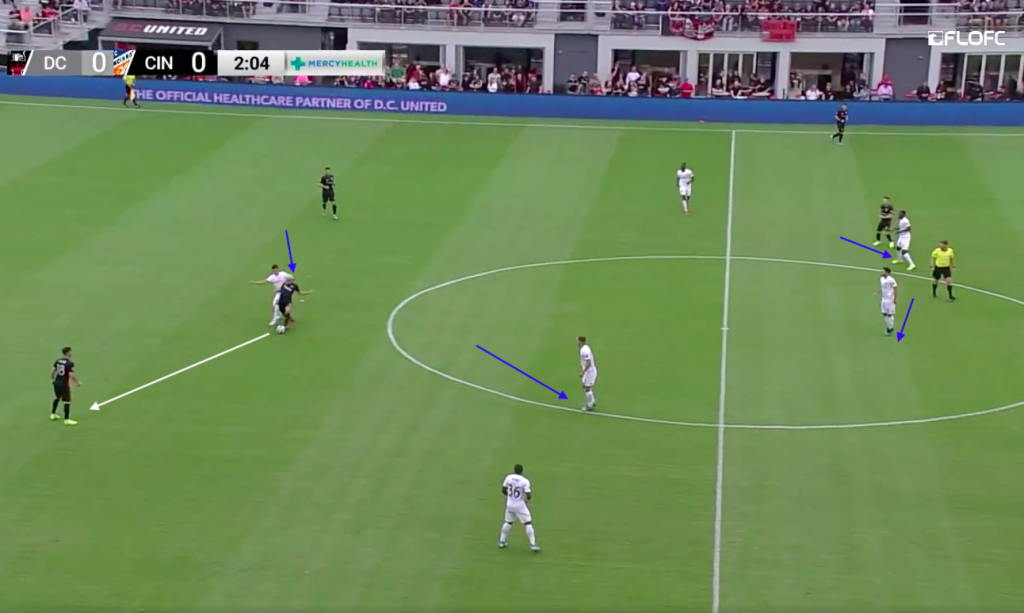 This forced United to play through its wingers, allowing FCC’s midfield to stay compact. The result was United settling for 11 crosses in the half, connecting on only three of them. 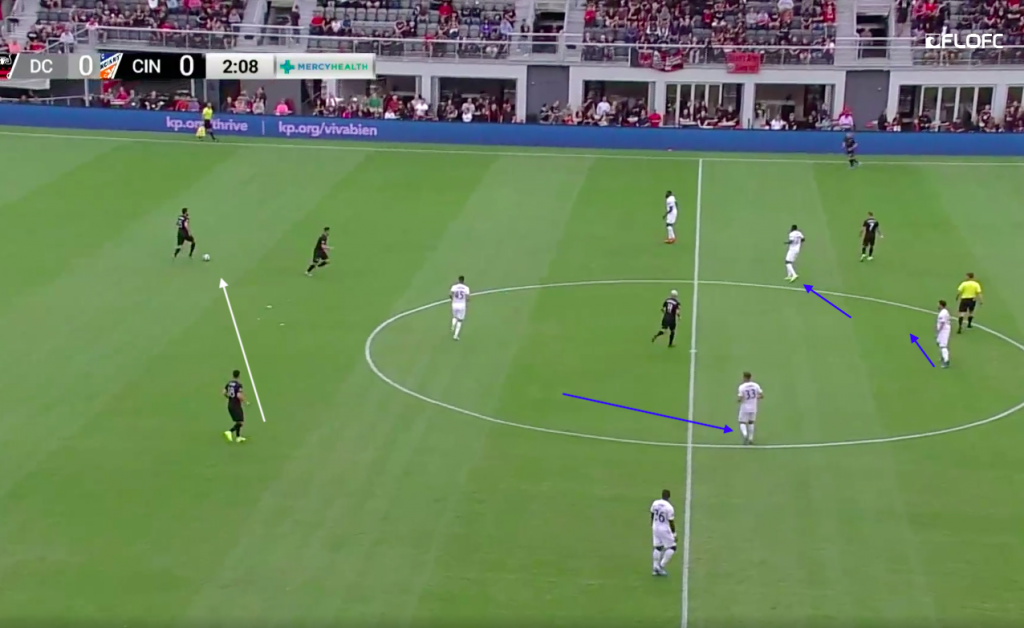 And Then There Were Nine

After Joseph-Claude Gyau and Roland Lamah were issued red cards late in the first half, the difficult task of limiting D.C. United’s ability to play through the middle of the park became nearly impossible. However, with the game plan already in place to force United to the flanks and congest the middle, Jans simply pulled Stanko back to create a flat midfield three and instructed the players to remain compact, only apply pressure when the player on the ball was dangerous and continue to not allow Arriola or Rodriguez to play between the lines.

Below, you can see that Alashe, Bertone and Stanko opened the half in a flat three, shifting toward the ball side as United played horizontally. As Rodriguez picked the ball up at the edge of the middle third, Alashe moved to pressure him while Bertone and Stanko shifted to cover the space in front of the back four. 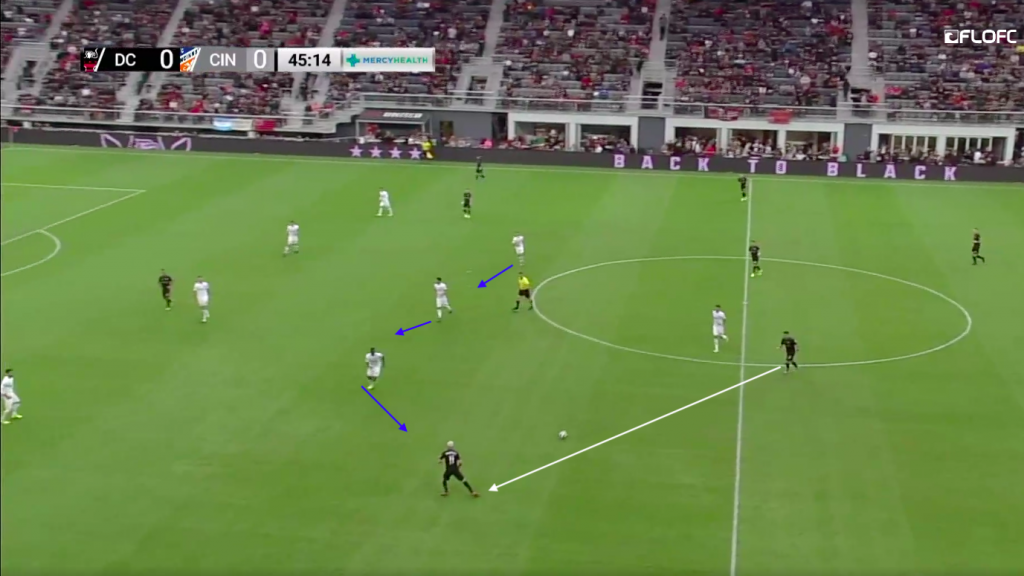 The pressure from Alashe forced Rodriguez to play the ball wide. Alashe continued to stick to Rodriguez and deny the Argentinian penetration. 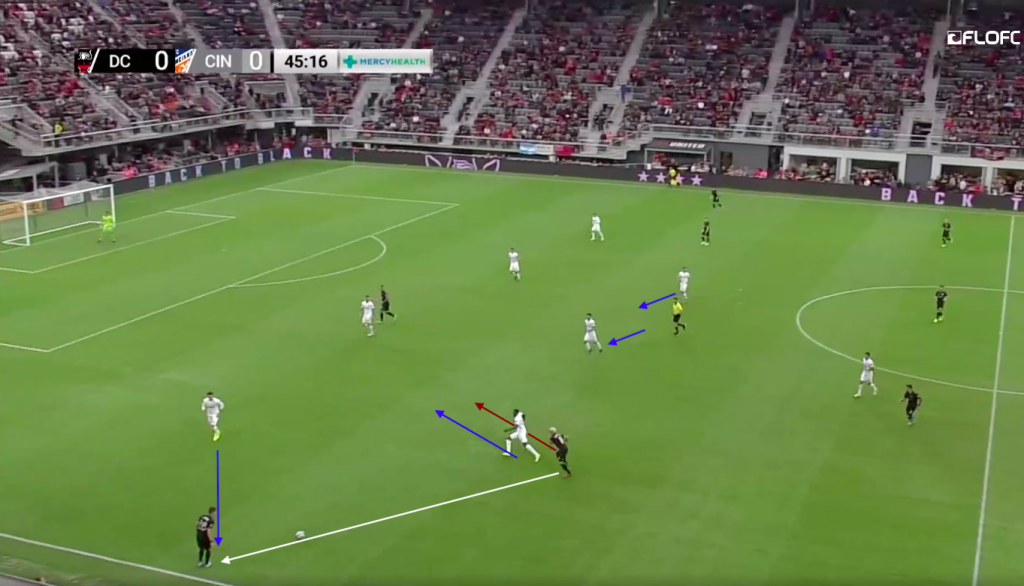 With no way forward, Rodriguez checked his run to get the ball back in front of the midfield. Alashe again applied pressure. This time Rodriguez attempted to dribble across the line to create. 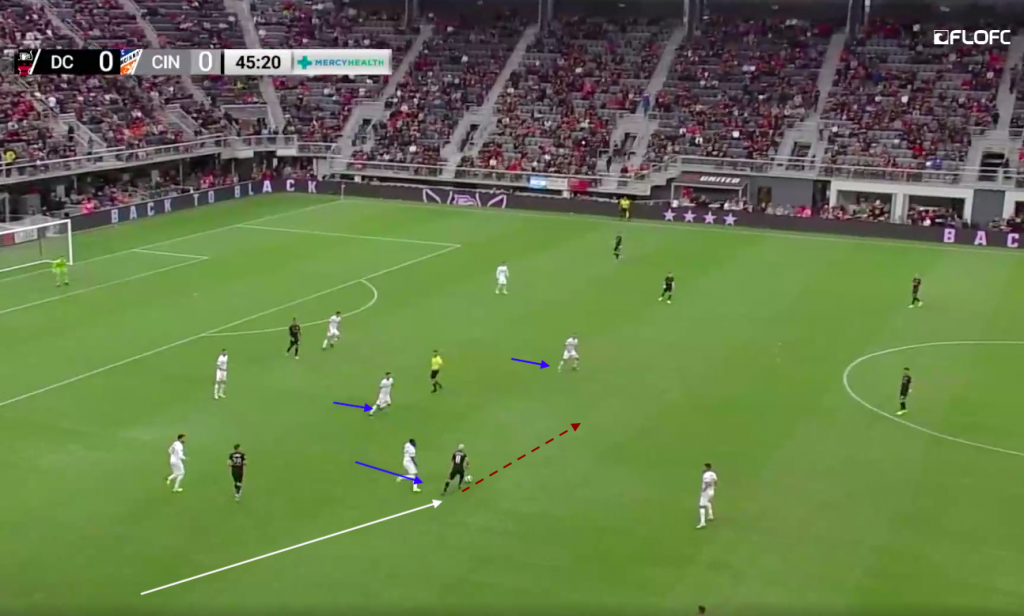 Instead of passing him along and potentially creating gaps, Alashe stuck on Rodriguez while Bertone and Stanko compressed space. This forced Rodriguez to move the ball to the opposite flank. 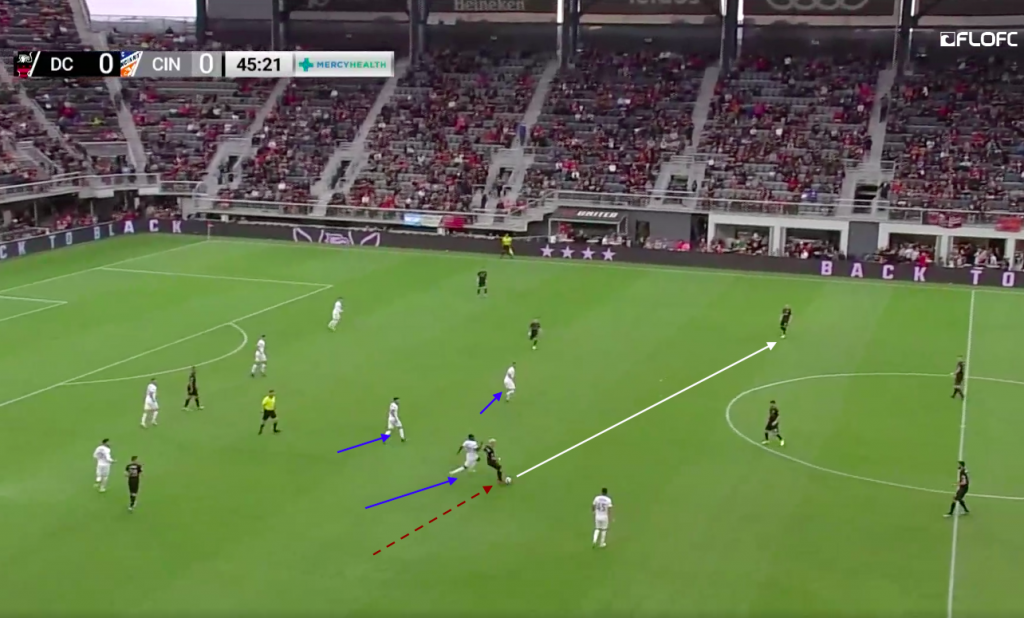 As soon as Rodriguez moved the ball, Alashe dropped back to cover the space in front of the backline. As the ball was moved wide and Greg Garza moved out to pressure, Stanko and Bertone shifted hard to prevent penetration into Arriola (burgundy circle). 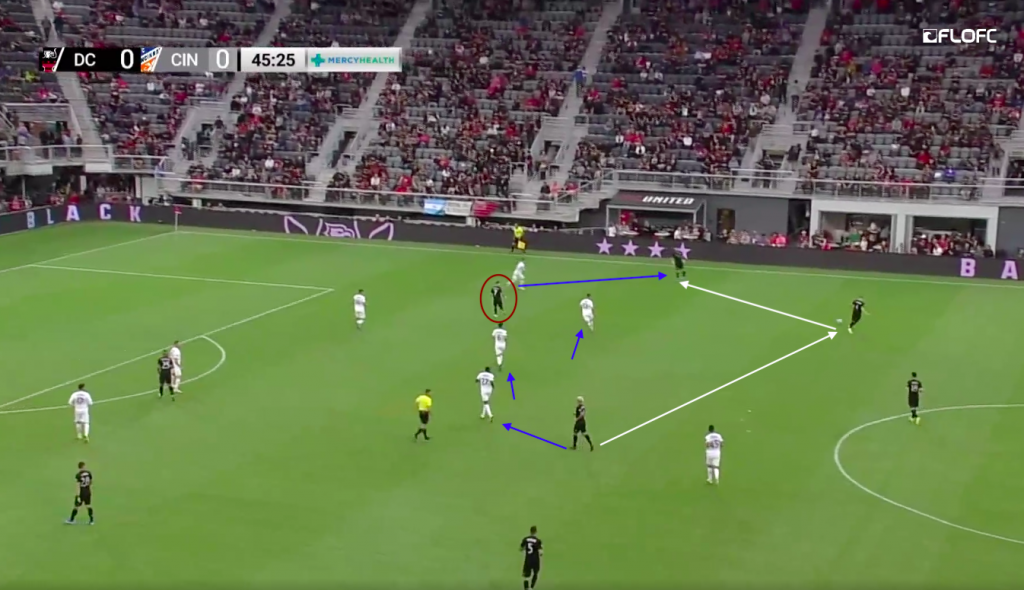 With no way forward, D.C. United again shifted the ball back toward the center, and FCC’s midfield again shifted with the ball, always remaining compact and aware of Rodriguez and Arriola. 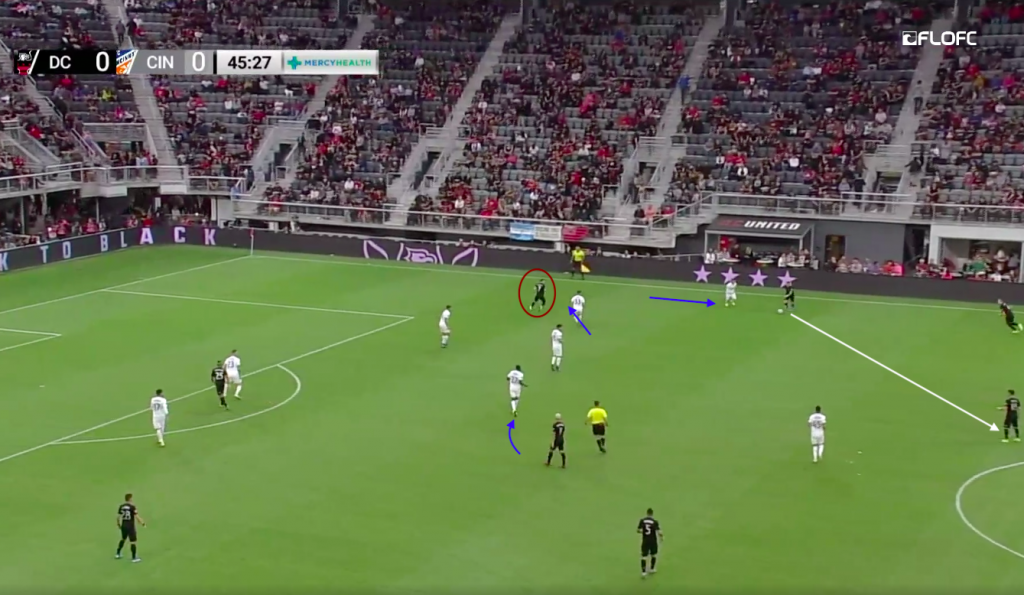 As the ball shifted back to FCC’s right flank, Alashe moved to tighten up on Rodriguez (burgundy circle) leaving Junior Moreno with space on the ball. 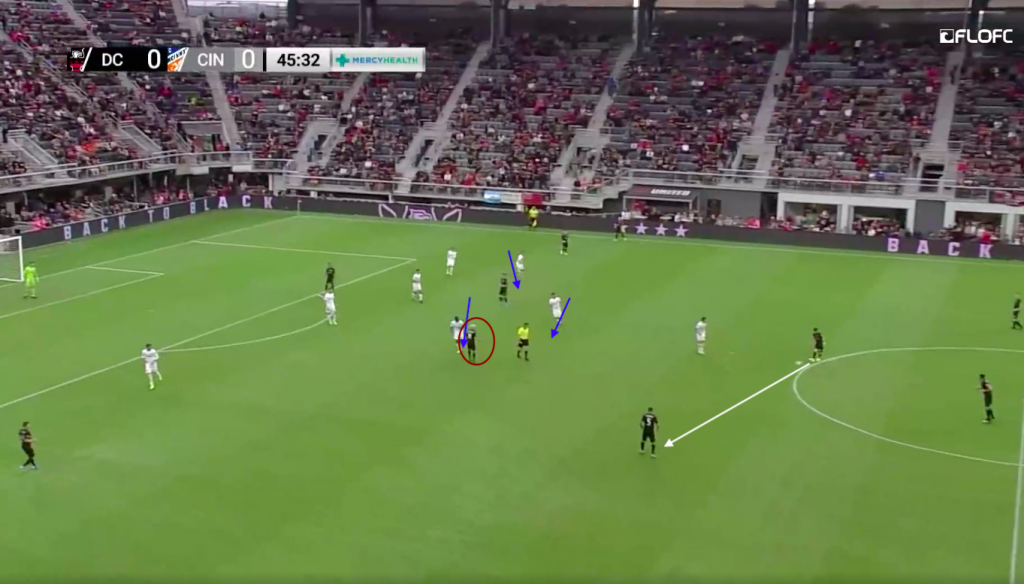 As Moreno moved forward, Bertone and Stanko shifted to cover Rodriguez and Arriola, and Alashe moved to provide light pressure, again encouraging D.C. United to play to the flank. 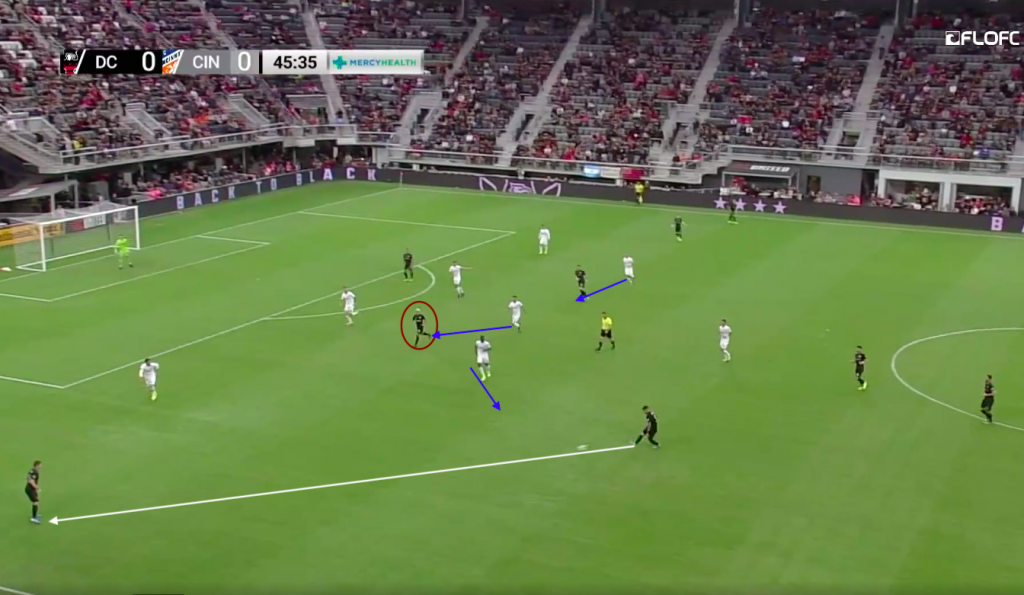 And the process repeated. United continued to play horizontally, and FCC continued to limit its opportunity to play vertically. The result? United ended the match settling f0r 34 crosses and attempting 32 shots, only three of which were on target.

As the half went on and remained scoreless, D.C. United began playing the ball more quickly in an attempt to catch the FCC team numbers down. This is when Jans introduced Kendall Waston into the match, keeping three in the midfield and eliminating the lone striker. This gave United a new problem to solve.

Below, Rodriguez hit a beautiful switching ball to the right flank. Arriola and Lucho Acosta were well poised to exploit the space created. 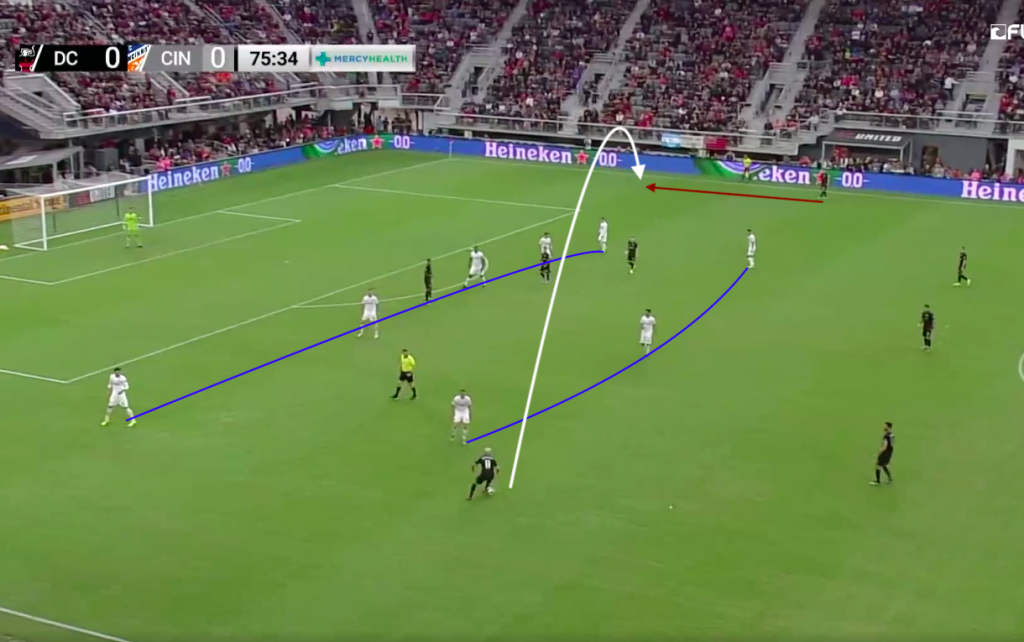 Garza sprinted to provide pressure, while Ledesma (now a midfielder), Stanko and Bertone attempted to shift and close up the gaps created by the long ball. 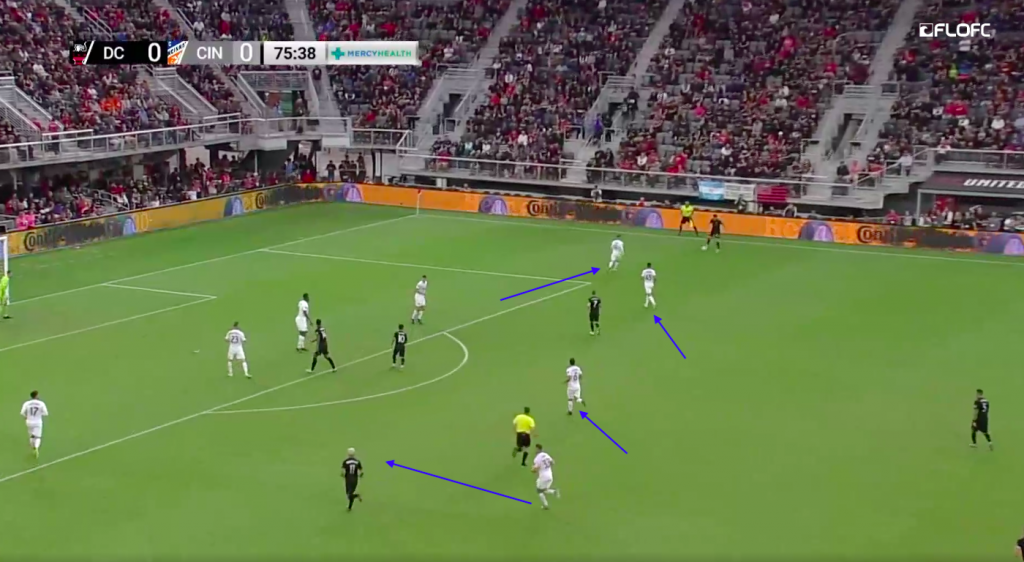 Arriola and Acosta moved to create an overload on the FCC left flank, and center back Frédéric Brillant stepped forward to receive the ball and create a numbers up situation. However, with Waston now clogging up the middle, Nick Hagglund stepped forward and turned what would have been a 4v3 United overload into a 4v4 . The ball was shifted to Brillant, and Ledesma applied quick pressure. Bertone stuck tight to Acosta, and Hagglund picked up the run of Arriola. 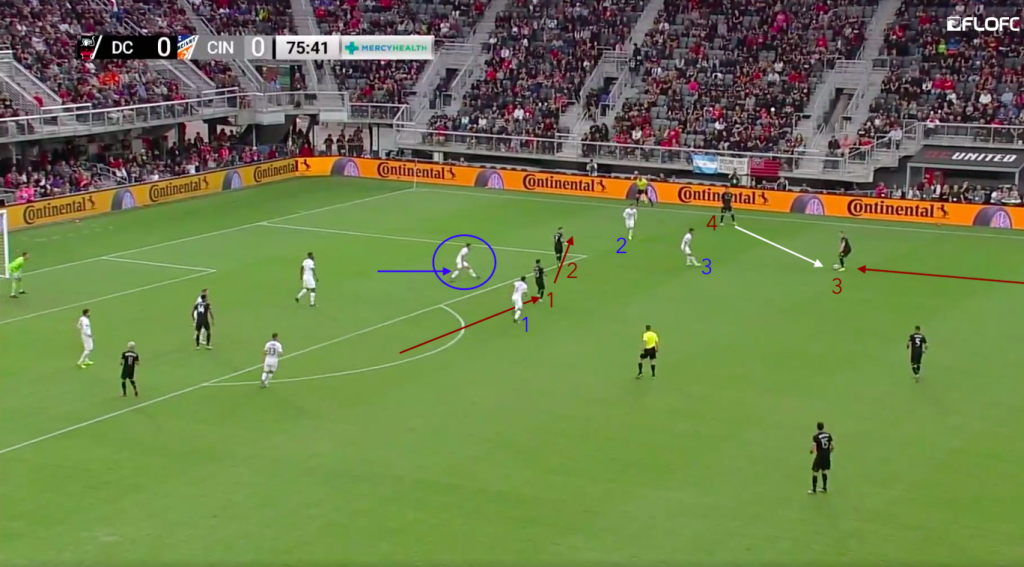 Once again United found themselves playing horizontally with no way forward. The midfield three continued to apply quick pressure to the possessing United players with the assuredness that one of Hagglund or Maikel van der Werff would step forward to cover up any gaps that they left in their wake. 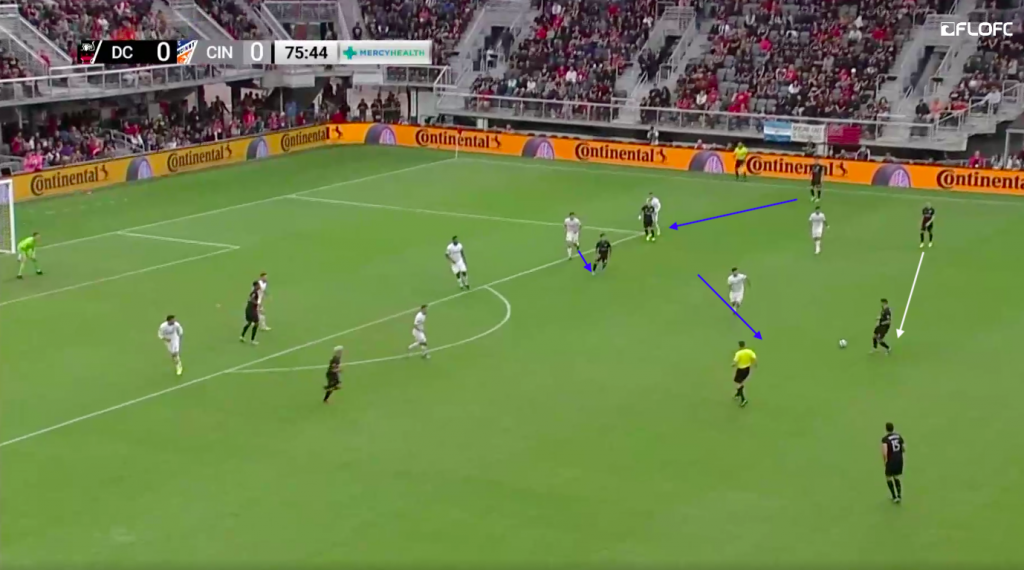 Whenever a team is numbers down, it must take risks to prevent easy chances. Taking these risks leaves open the opportunity for the opponent to create chances and D.C. United did have some chances. However, the disciplined midfield three with Ledesma in front back-checking for most of the half limited D.C. United mostly to crosses and shots from outside of the box. Once it began moving the ball quicker and attempting to use the space FCC was allowing it to have in wide areas, Waston was introduced to allow quicker pressure in these areas, and an extra center back that could step forward and limit any overloads.

It cannot be understated how impressive this FC Cincinnati defensive performance was. FCC fans can be excited to move into the offseason with Jans at the helm and should expect a tactically disciplined yet adaptive team next season. Hopefully the players that stick around from year one to year two will buy into this plan, and when doubts arise as to its viability they will #RememberThe9.