FC Cincinnati’s performance against Orlando City SC on Sunday has been widely regarded as very good — if not excellent. For my part, I am on board with this assessment. Yet FCC only came away with a draw. Let’s look at the tactics to see what it has to build off of going into DC, and what needs to improve.

In a 4-3-3, the midfielders defend in a fluid triangle. What this means is that the closest player to the ball is responsible for pressing, while the players behind adapt their shape based on the angle of approach. Here, Frankie Amaya is slightly pressed, with Allan Cruz and Leonardo Bertone adapting to his position and angle of pressure. 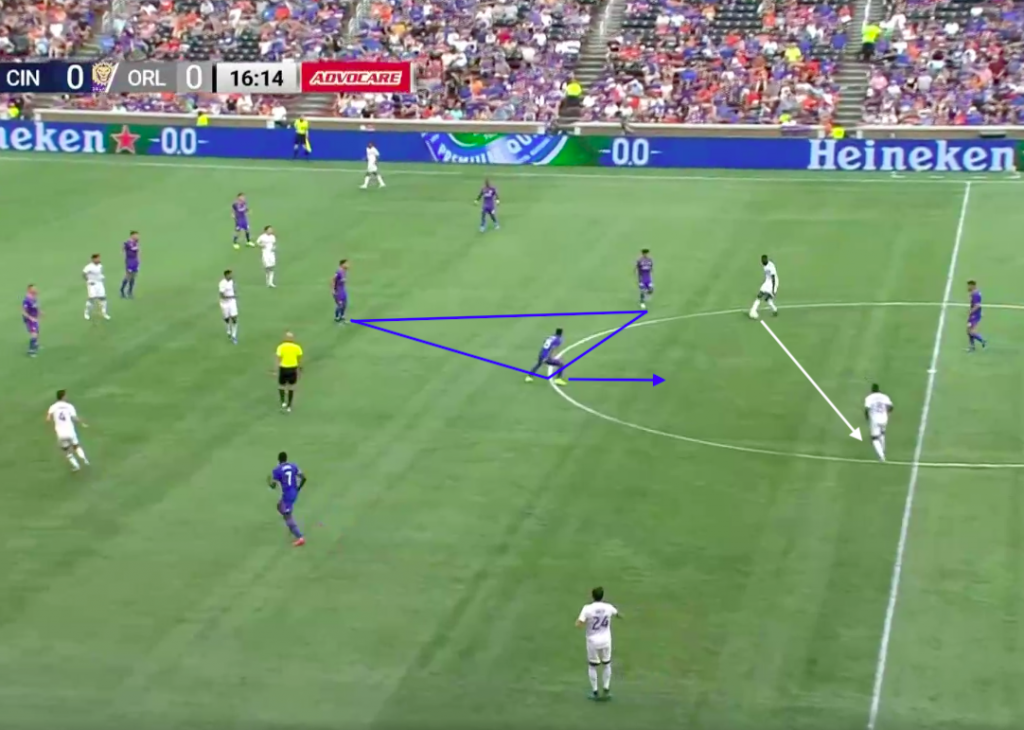 As the ball moves from right to left, Cruz moves to press, and Bertone works hard to play off of Cruz’s right shoulder, since he is forcing the ball toward the right side with his angle of pressure. Amaya drops toward Bertone’s initial position. 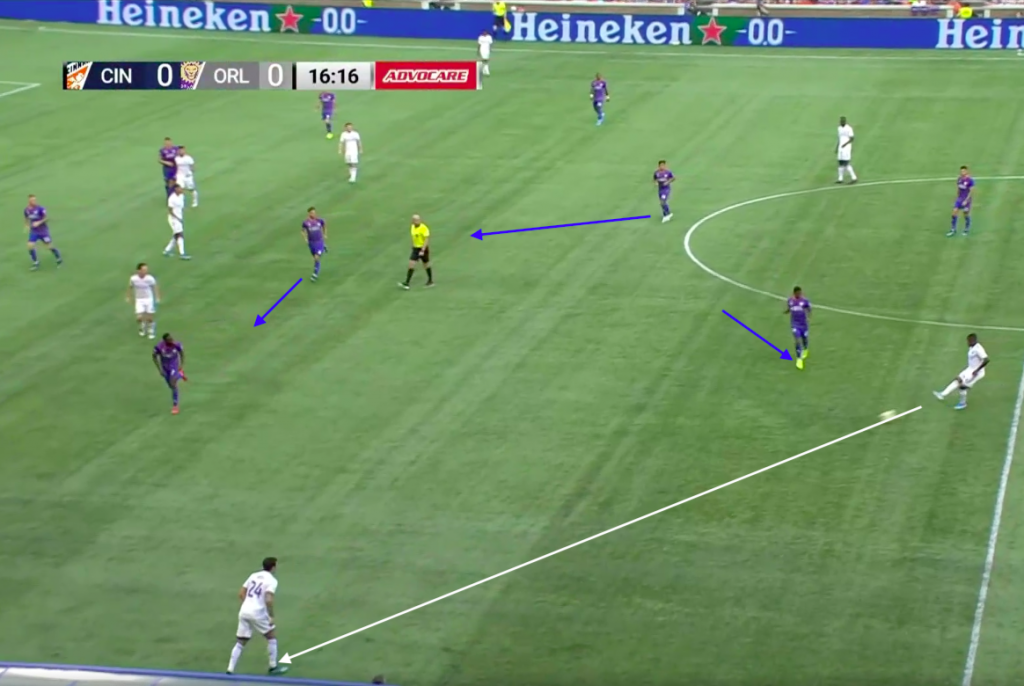 Finally, as Kyle Smith receives the ball, Bertone presses, and Amaya works hard to play off Bertone’s left shoulder and prevent any penetrating passes. This leads to an Orlando turnover. 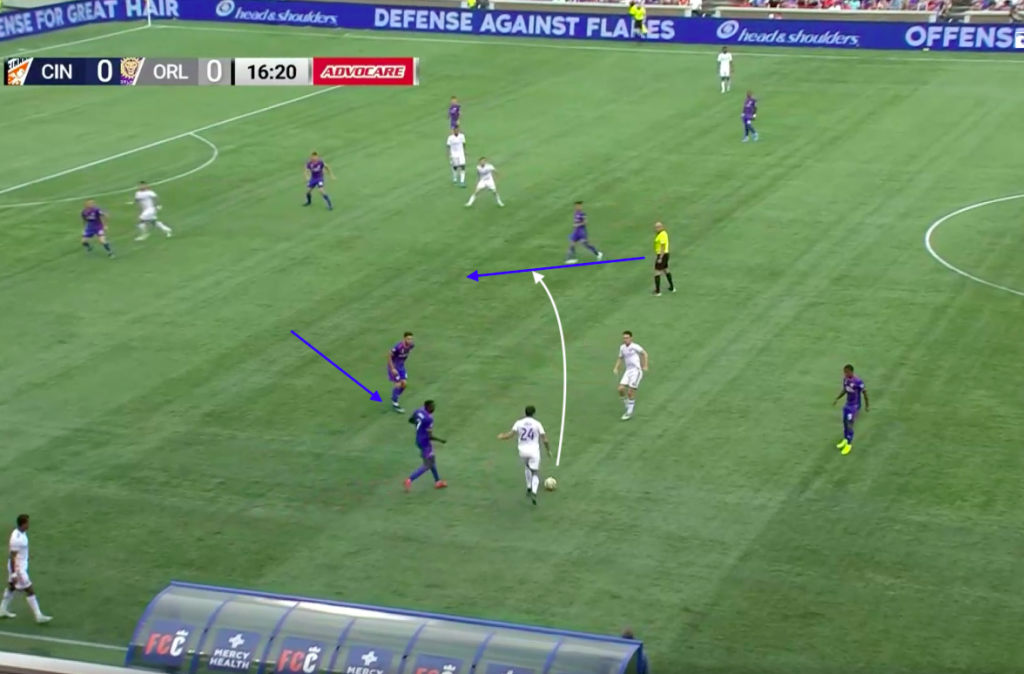 The midfield triangle of Cruz, Amaya, and Bertone did this expertly throughout the match, limiting the Lions’ chances and making the life of the FCC back line a bit easier.

McCabe Not Quite There

McCabe is a fine player and has acquitted himself well at the MLS level in his young career. However, in the five-plus minutes he played, it was clear that he was not quite on the same page as Alashe and Bertone. In the example below, Alashe is pressed, and Bertone is correctly playing off of his left shoulder. McCabe is stretched out of position, leaving Nani with an easy pass to Will Johnson. 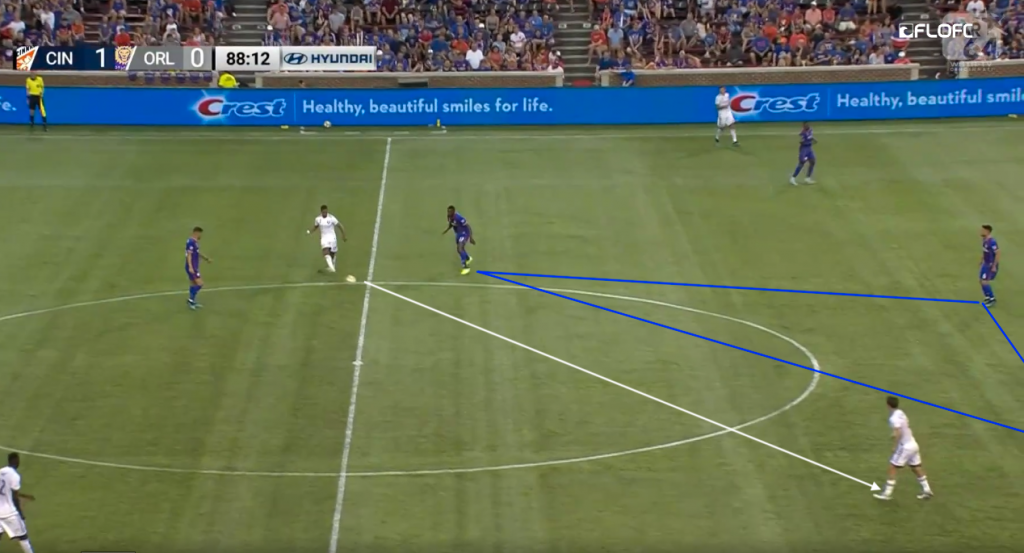 McCabe did eventually press correctly, and Alashe correctly worked hard to drop in and prevent any cross-field passes. 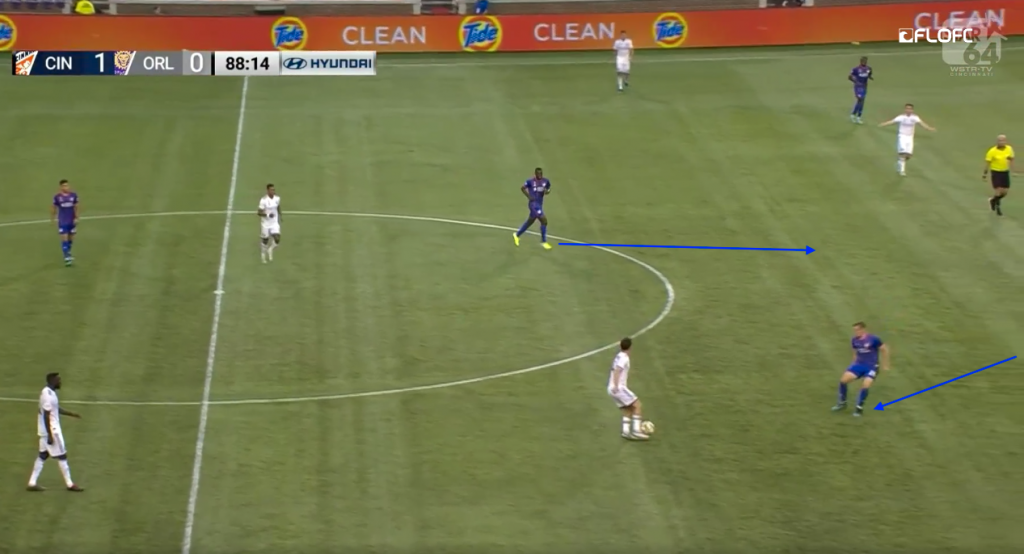 This forced Johnson to push a simple pass back to Nani, at which time McCabe failed to follow the ball and press (yellow). 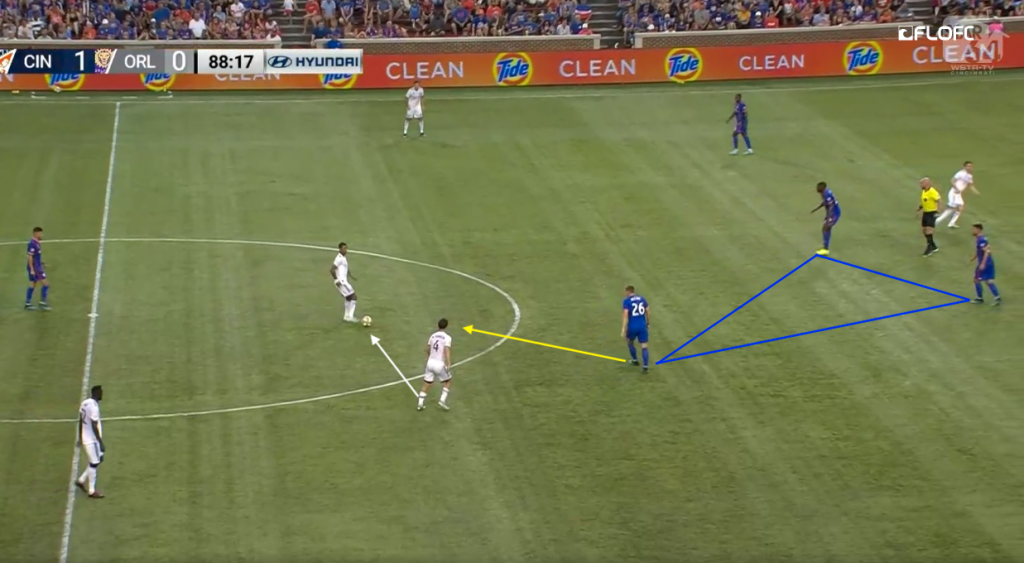 Nani had the time and space to lift a pass to the right flank, and because Bertone was correctly playing off of McCabe’s right shoulder, the midfield was shifted far to the right, giving Orlando a lot of space in which to create a chance. All of this from one player being slightly out of position. In fact, McCabe’s lack of understanding within the defensive triangle was one of the factors leading to the Lions’ game-tying goal.

Much was made about coach Ron Jans choosing to play with inverted wingers (i.e. a right footed player on the left, and a left footed player on the right). Joseph-Claude Gyau and Roland Lamah were tasked with creating from their less-favored sides of the field. Gyau had much more success than Lamah, as 49% of FCC’s attack came down his side, compared to only 29% down the right. Gyau also played a key role in Allan Cruz’s goal.

So what made Gyau so much more successful? Greg Garza overlapping from the left back position. Garza and Gyau combined often throughout the match, and even when Garza wasn’t used by Gyau as a passing option, his runs allowed Gyau to cut the ball onto his favored right foot. Below, Garza’s run forces Ruan to play off of Gyau without forcing him in any direction. 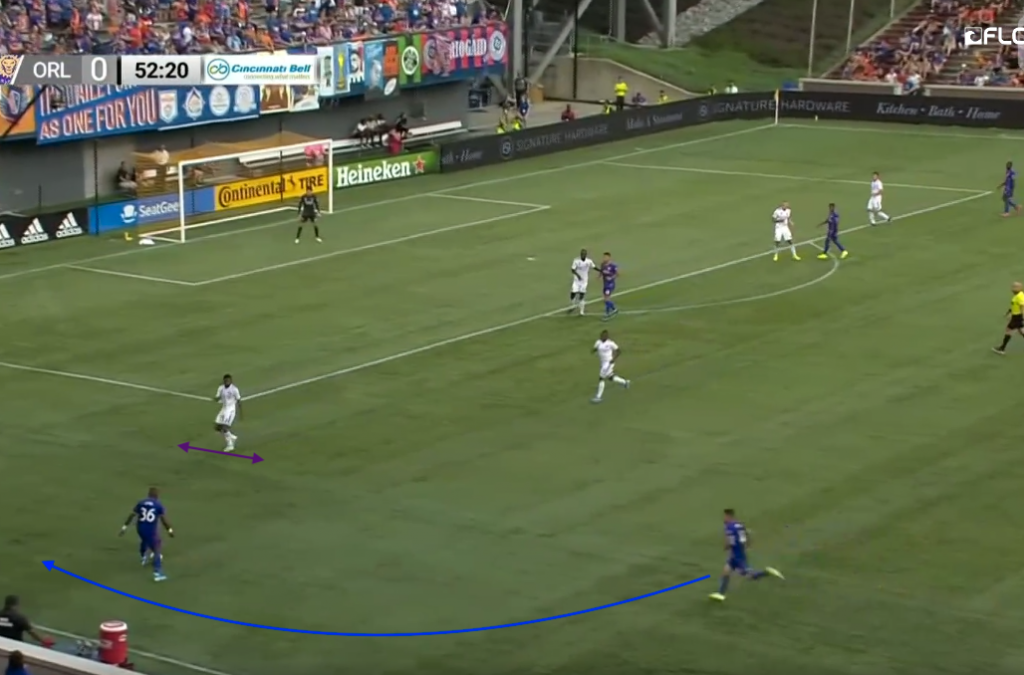 As the covering midfielder rushes in and tells Ruan to step to Garza’s run (yellow circle), Gyau is able to cut hard toward the inside and catch the defenders off guard. 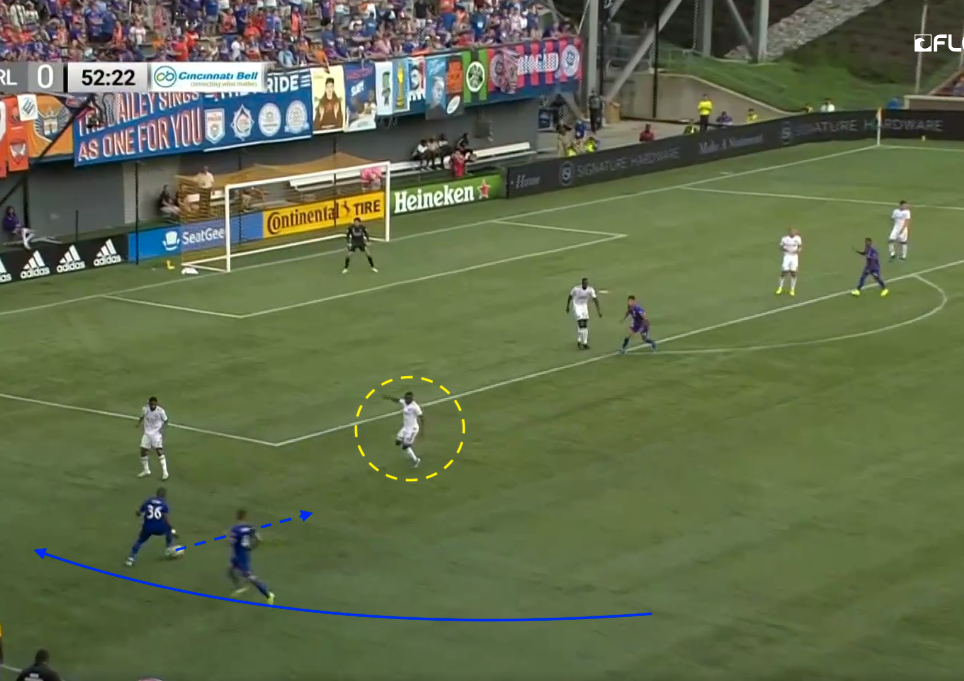 This run both allowed Gyau to get onto his right foot and get past the covering midfielder to find Emmanuel Ledesma in dangerous space at the top of the box. 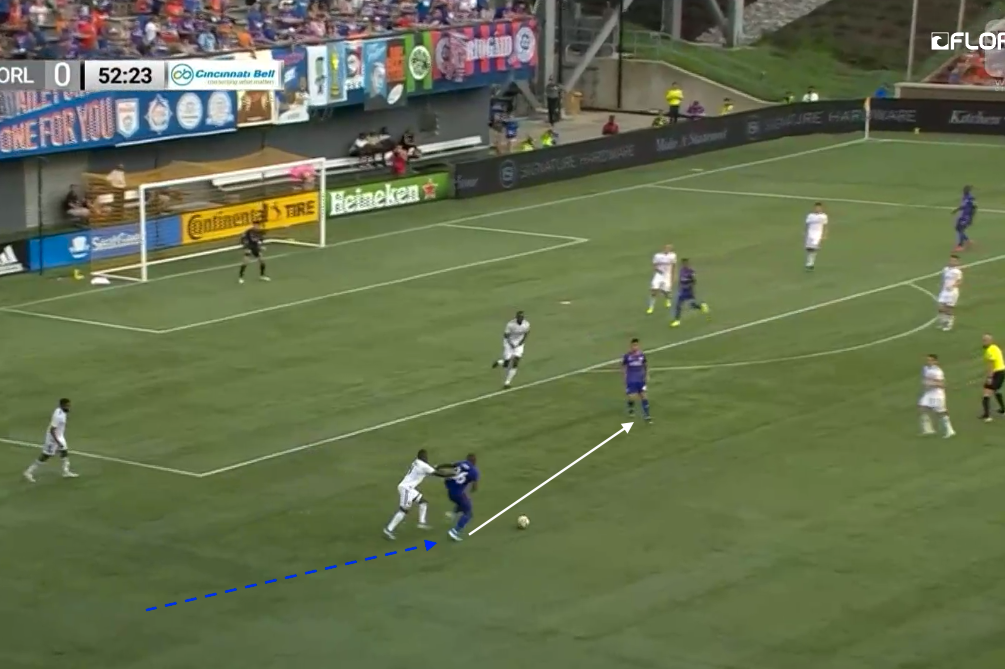 For all of Mathieu Deplagne’s qualities, he isn’t quite the force going forward that Garza is. Here, Lamah has control of the ball on the right flank, but with no overlap coming from Deplagne or a run to the corner from Cruz, Kyle Smith is able to play him tightly and force him to his right. 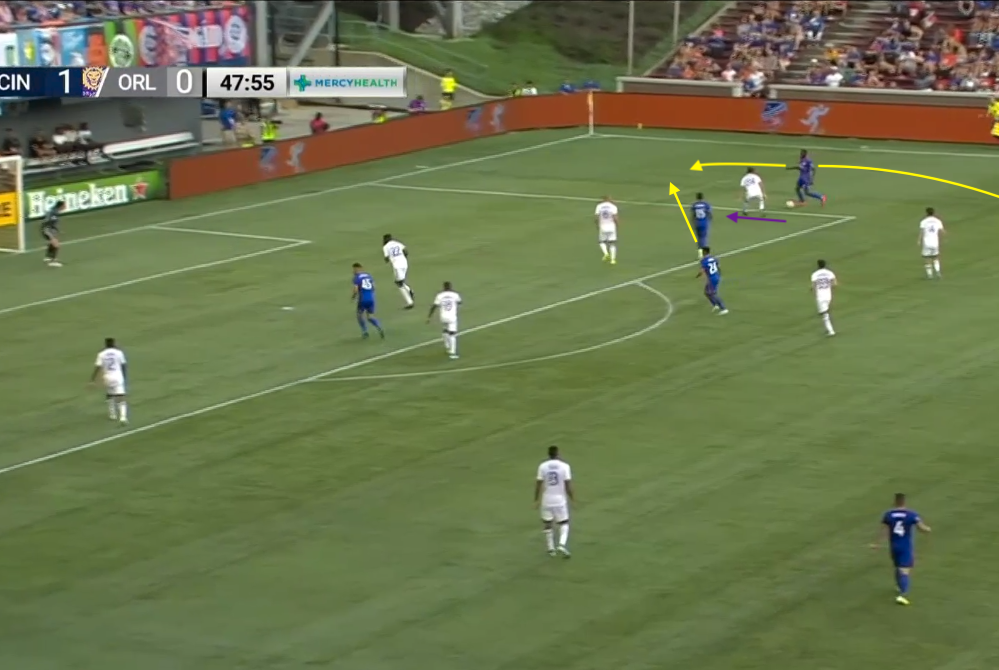 Even as Lamah stepped over the ball and tried feint after feint, Smith didn’t bite because he knew that Lamah posed little to no threat going to his right. 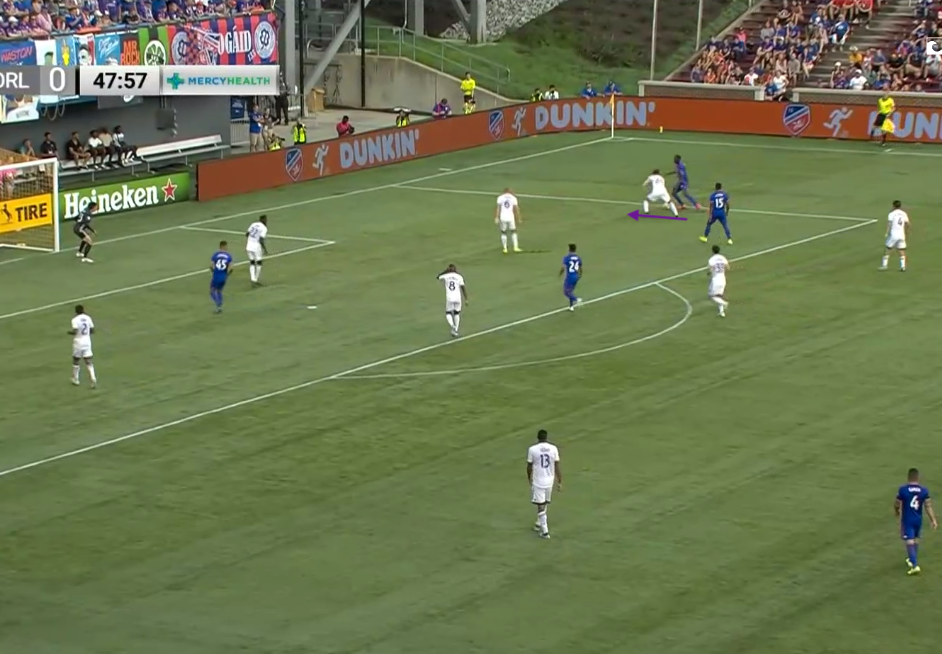 Finally, Lamah floated a meek cross toward the center that was easily picked out by the Orlando City defense. 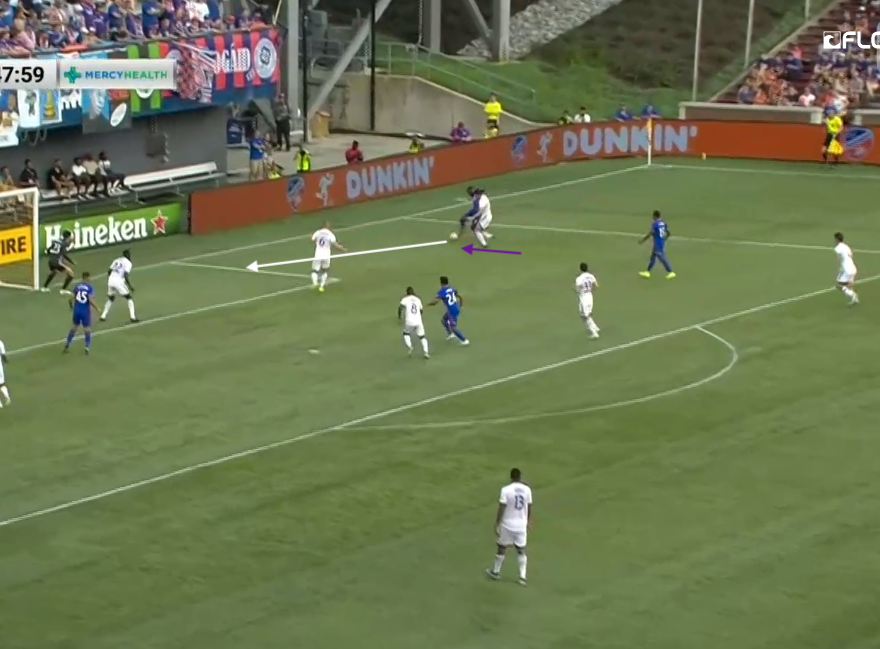 FC Cincinnati played quite well for the majority of the game and limited Orlando City to only three shots on target, all coming in the second half. Gyau had perhaps his best performance in an FCC shirt, the midfield triangle played better as a unit than it has all year, and Derrick Etienne Jr. and Alashe played really well in their substitute appearances.

Overall, as Jans molds FC Cincinnati into the team he wants it to be, there is a lot to be optimistic about in the Queen City.