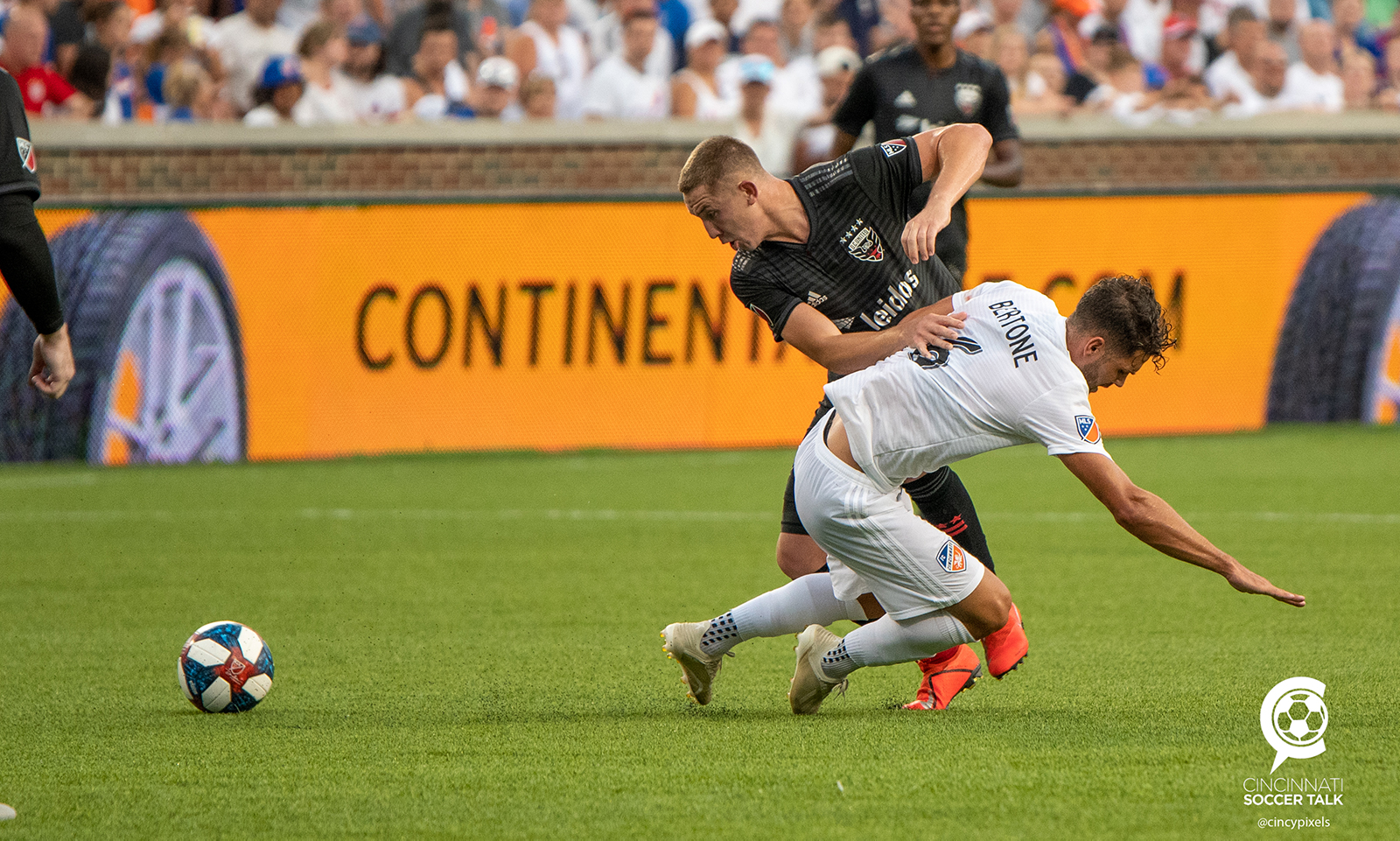 FC Cincinnati went down to nine men Sunday against D.C. United, but the club stood tall defensively in the second half to earn a gutsy 0-0 draw.

FC Cincinnati went into its final game of the 2019 MLS Season with nothing to gain but confidence and pride. D.C. United, on the other hand, had its destiny in its own hands. It was in fourth place which guaranteed it home-field advantage in its first playoff game. All it needed to do was beat the worst team in the league, and its first playoff game would be at home at Audi Field. Given huge opportunities, D.C. found this task beyond it.

United came out strong at the beginning of the game, but after withstanding the pressure from DC, Cincinnati was able to get some control over the game and create some chances.

Unfortunately, what looked to be a fairly exciting though chippy game came to an end in the 41st minute. Center referee Dave Gantar judged a reckless tackle from Joseph-Claude Gyau to be worthy of a red card and sent him off the pitch. In the ensuing chaos, Roland Lamah pushed Felipe to the ground and was also shown a red card.

Almost immediately after play resumed, D.C. put the ball into the net, but fortunately for the Orange and Blue, VAR came to the rescue and the goal was rescinded and an offside call was given. Cincinnati held strong to end the half scoreless 0-0.

In the second half, FCC bunkered into a 4-3-1 formation, leaving Emmanuel Ledesma up top as the loan striker. United pressed over and over but were unable to break down Cincinnati’s defense. Przemysław Tytoń was forced to make two big saves to keep the Orange and Blue in the game.

The first came in the 64th minute. Paul Arriola curled the ball towards the back post, but Tytoń was able to push it wide.

👐 Titi with the diving save to keep the score 0-0. #DCvCIN pic.twitter.com/gf5I5NZxfq

The second save came in the 70th minute. Ola Kamara headed the ball from just outside the 6-yard box forcing Tytoń to make a reaction save that looked inspired from watching volleyball.

As the game progressed, coach Ron Jans shifted the team more and more defensive, bringing in Kendall Waston, Tommy McCabe and Andrew Gutman, leaving the team set up in a 5-3 formation without any striker up top. When the final whistle blew, the team earned a point and Tytoń earned another clean sheet.

“The boys are heroes today, but I am so sorry for them,” said Jans, reflecting on the game. “I think the first red card, I don’t think it’s a red card. It was unintentional. Monsters are not born. They are created. So, in the second half, we tried to win time, to defend and defend. I think they did great. They played with a lot of heart and the longer the game lasted, we got more excited. So, great work.”

Said Greg Garza: “I think if you look at the last four games, the four teams that actually needed something, either making playoffs or even them not getting the home match for playoffs,” said Garza, feeling positive about the progress of the team. “We ruined it for Montreal, for Chicago, for Orlando and now (D.C. United) go home with not the best taste, and now they have to travel to Toronto, their first game away in a one-game playoff game. I think that’s something that kind of sticks out to me the most.”