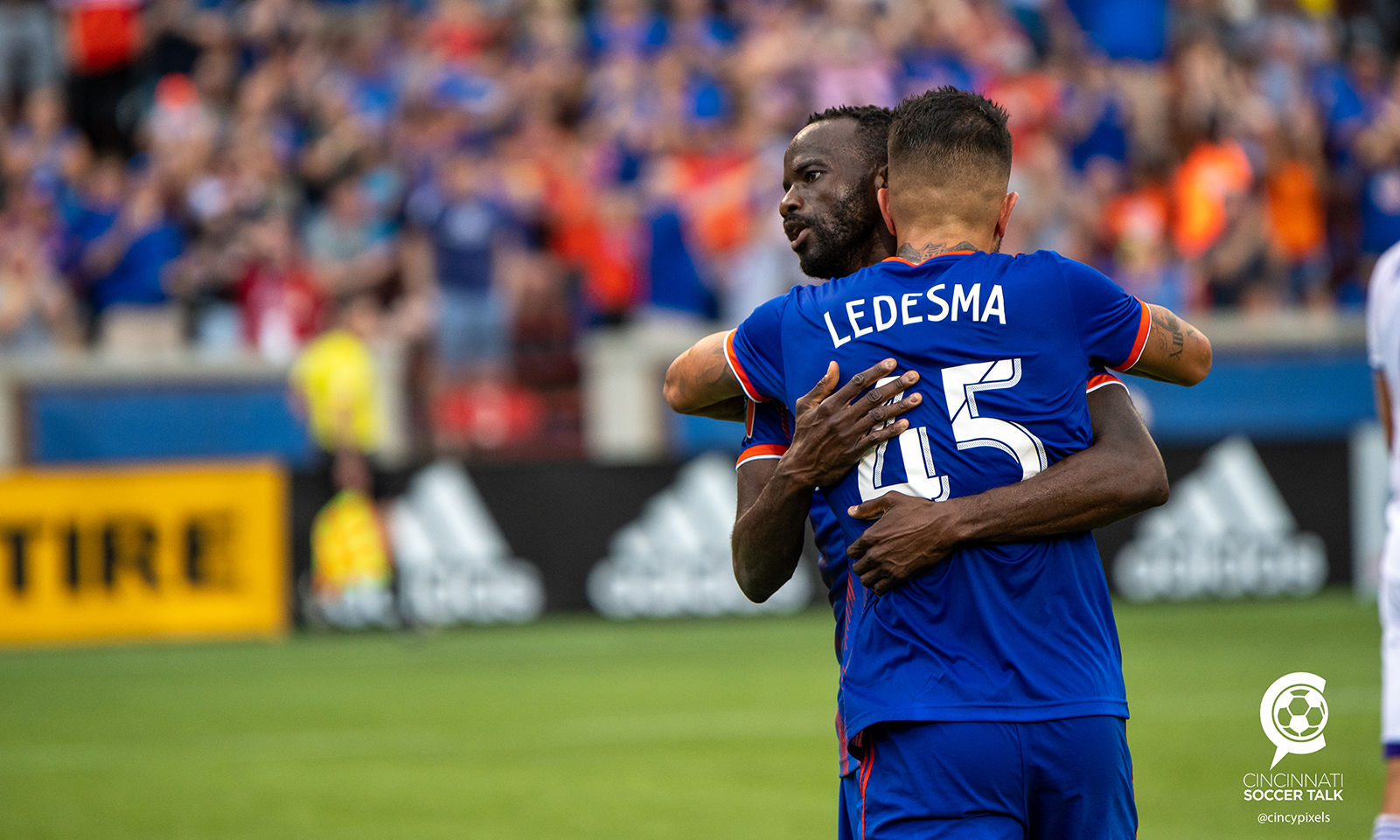 The Orange and Blue conceded in second-half stoppage time for a 1-1 draw Sunday against Orlando City SC to set an MLS single-season record for goals allowed.

In a season full of disappointments, FC Cincinnati fans got to see one more in person.

Moments away from ending the home season with a rare victory, the Orange and Blue conceded in second-half stoppage time to Orlando City SC’s Benji Michel. The goal canceled a first-half tally by Allan Cruz for a 1-1 draw between the two sides Sunday at Nippert Stadium.

“I felt like we could have come out with a win,” said forward Joseph-Claude Gyau. “We played well together. From the beginning whistle, we put pressure on them. We could have put away more of our chances in the first half, but I think our overall performance was very, very, very good. We wanted to send the fans off at the end of the season with a win, and it was a bit unfortunate that we came out with a tie.

“I think nobody can hang their heads today. I think we left it all on the field.”

A road match at D.C. United next Sunday is all that remains in FC Cincinnati’s inaugural MLS season. The club has just 23 points and a 6-22-5 record. At Nippert this season, the Orange and Blue lost 11 out of 17.

Michel’s goal, a clean-up of a cross from Nani intended for Dom Dwyer, was the 75th conceded by FC Cincinnati. It breaks the MLS single-season record for goals allowed, previously set just last year by, coincidentally enough, Orlando.

FC Cincinnati had one more shot after the equalizer, but Emmanuel Ledesma’s attempt on a cross from Roland Lamah was wide.

It was a promising first half for the home side, with nine shots, including five inside the box and four on target.

“We decided to play both wingers on their weak foot so they can come inside,” FC Cincinnati coach Ron Jans said. “I think maybe Roland had the most chances, but all the balls fell to his right foot to finish off. Maybe he took a little too much time or caught the ball instead of shooting. Maybe that’s a reason. When you look at the whole season, the efficiency of scoring goals, we have to do better. It’s so great, but we have so many bad stats and we can improve on so many things and what we want to do, and finishing is one of them”

Cruz did finish in the 40th minute. From the left wing, Gyau lobbed a through ball to Ledesma. Ledesma crossed to Cruz, who slotted it into the left side for a 1-0 lead.

It was Cruz’s seventh goal of the season and Ledesma’s fifth assist — both team highs. Cruz was just named team MVP last week.

“I’m happy, I’m honored,” said Cruz through an interpreter of his team award. “I think it reflects the hard work that I put in this season and hopefully next season I can show why I was named MVP of the team.”

There was a bit of controversy to close the first half.

Rowe brought down Lamah inside the box, and a possible handball in the same sequence was not called. Then moments later, Cruz received a yellow card for simulation after contact inside the box. Cruz will miss the season finale in Washington next week on yellow card accumulation.

“You have to be used to VAR now,” Jans said. “You never know. I didn’t see it on television and in slow motion. I’m not sure. I have my doubts with the goalkeeper. He was in kind of a sandwich. I’m not sure about that one. The other one I think wasn’t a penalty.”

Each side had their fair share of chances in the second half. Przemyslaw Tyton made one of his two saves from point-blank range on a header from Dom Dwyer in the 50th minute. Derrick Etienne Jr. and Cruz had shots on target for the Orange and Blue, who forced Rowe into six saves.

“I warned them, in the second half they (Orlando) would come out and be more aggressive,” Jans said. “It was about 50-50 maybe in the second half with the chances. You see, it’s so hot, and you get tired, and you have to run and to work both sides. And in extra time you concede a goal. It’s so disappointing, because it was our game.”