Brad Gough breaks down the goals scored in FC Cincinnati’s 3-1 loss at FC Dallas on Saturday in this edition of How They Happened.

An early goal undid FC Cincinnati once again as it fell 3-1 to FC Dallas on Saturday. Here is a look at what lead to each goal scored.

Dallas’ opening goal arose from a cascade of problems that began, as so many goals do, with a single player tuning out and making a simple mistake. This time it was Allan Cruz who failed to track Michael Barrios after the winger made a simple give and go pass to the inside. 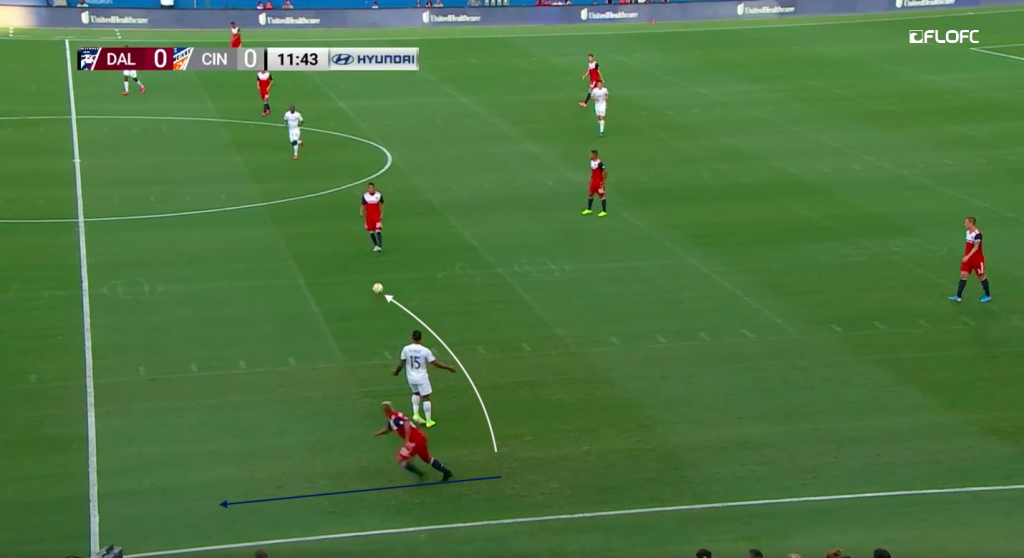 Cruz simply chose not to follow the runner. As Barrios received the return pass, Leonardo Bertone was forced to vacate the center of the field to pressure him. Jesús Ferreira  (dark blue circle) continued his run forward into the space vacated by Bertone. 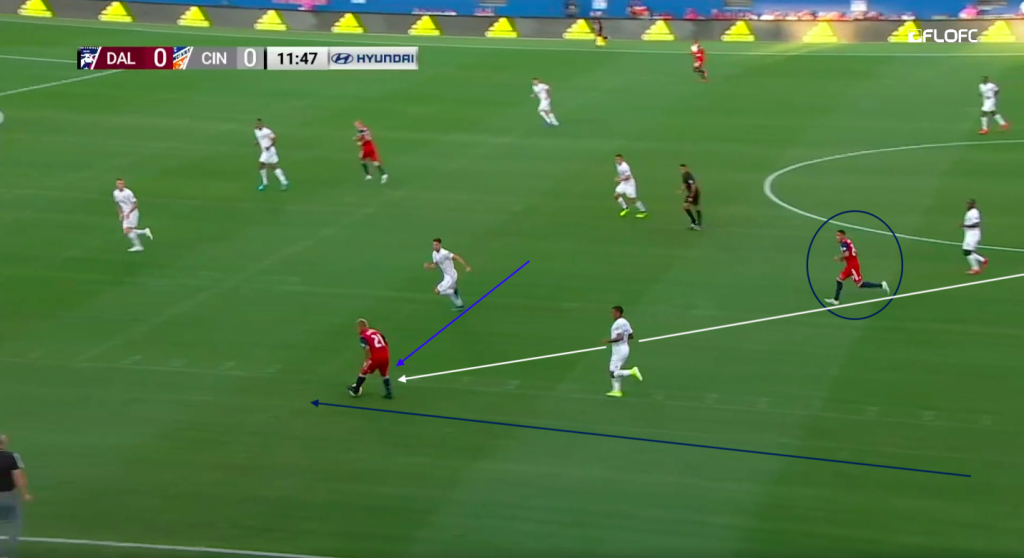 Cruz wasn’t the only member of the Orange and Blue to have a momentary lapse in judgment during the buildup. Barrios was able to release the ball just before Bertone could put the tackle in, and a wide-open Ryan Hollingshead was there to receive it. Justin Hoyte should have been much tighter to Hollingshead, as the outside back was his sole responsibility at the time. However, Hoyte elected to give Hollingshead close to 5 yards of space and a clear route to the center by sagging off of his mark. 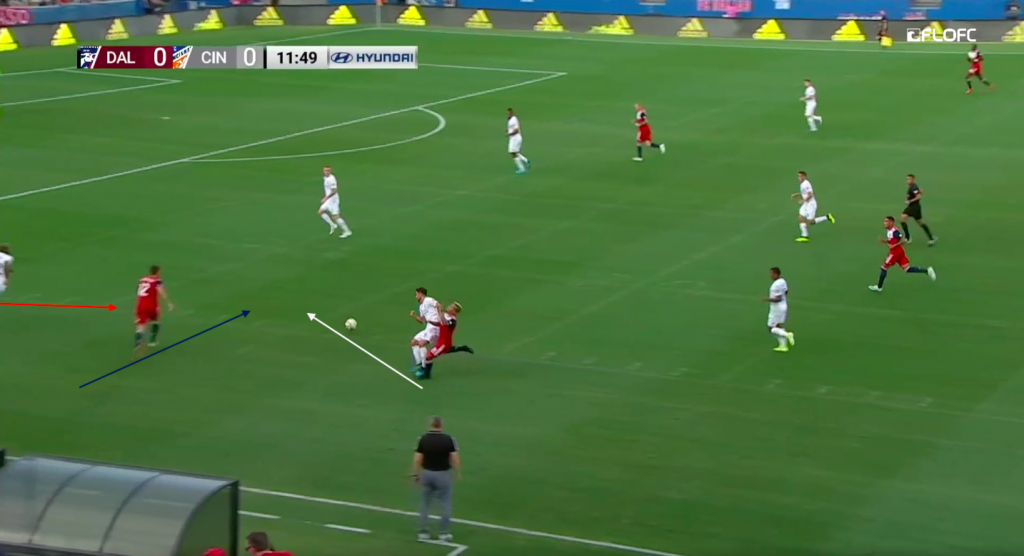 Once Hollingshead came inside with the ball, the defending became comical. First, Maikel van der Werff challenged for the ball and was able to poke it away to the aforementioned Ferreira. Victor Ulloa and van der Werff both moved to challenge Ferreira, who moved the ball easily to Zdenek Ondrasek, who stood unmarked at the top of the 18. Van der Werff and Ulloa continued their ball chase toward Ondrasek, this time pulling Kendall Waston in for the show. Ondrasek shifted the ball back to Hollingshead, who after the defensive run-around, had plenty of time to curl his effort into the bottom corner of the goal, making it 1-0 to Dallas.

Dallas’s second goal was a case of transitions gone awry. Ulloa attempted to dribble the ball through the middle third, but the ball was tackled away from him. It fell kindly to Ferreira. 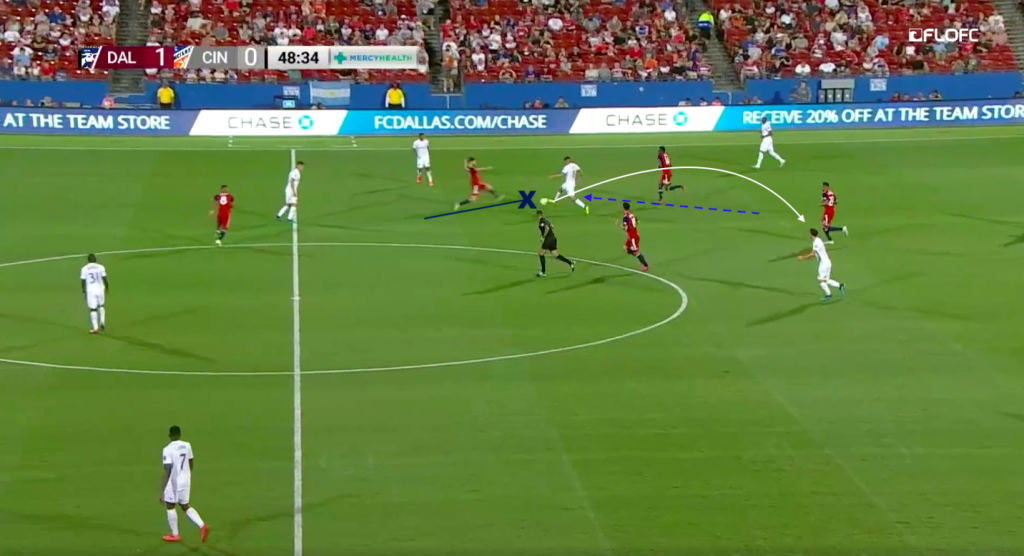 As Ferreira turned with the ball, he spotted Barrios, who was left wide open in the wake of Greg Garza bombing forward in transition. Van der Werff was not alert to the danger and did not pressure the midfielder. Ferreira picked out Barrios easily before Garza could reverse directions and get back into position. Barrios finished the transition off expertly, to make it 2-0 to Dallas. 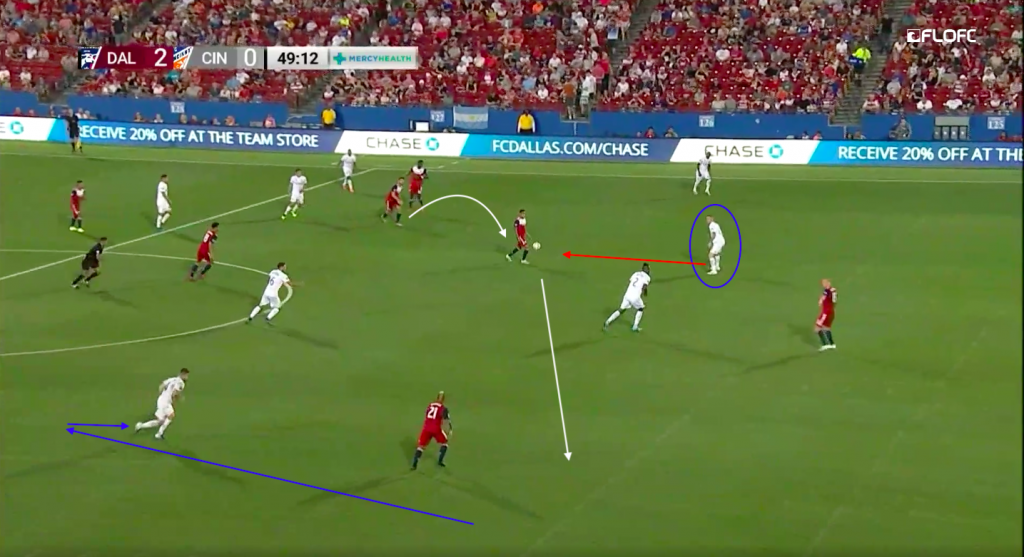 Less than two minutes later a discouraged FCC backline was put under pressure yet again, and once again it cracked. The move started with Kekuta Manneh and Cruz pressing the Dallas backline in the corner. Emmanuel Ledesma failed to pinch in appropriately from the right wing, and Dallas moved the ball easily past the press. 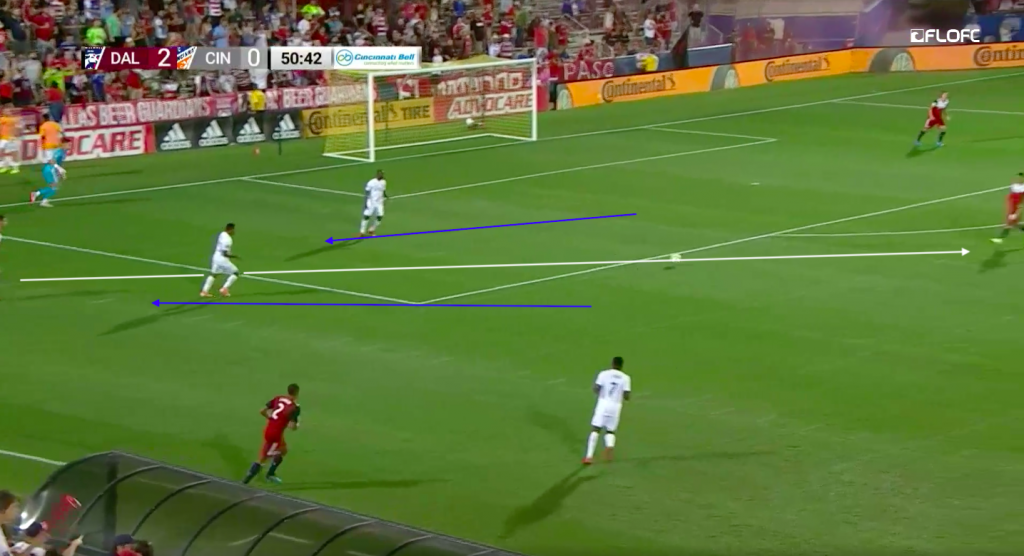 With the press easily beaten, the Dallas midfield was allowed to carry the ball forward into the pocket of space left gaping by a retreating FCC midfield. 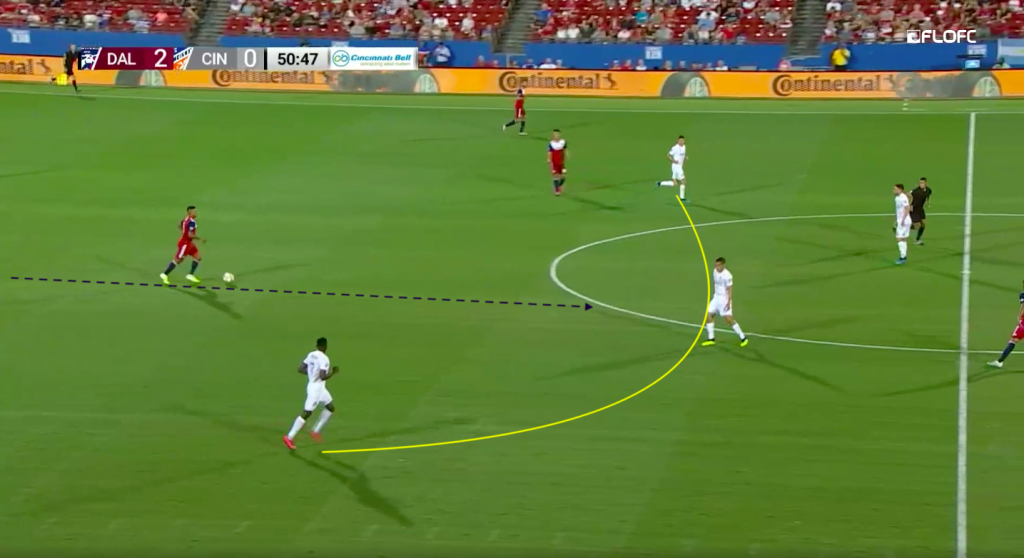 With so much time and space, an easy pass was placed beyond Roland Lamah to a wide-open Barrios. Garza moved to pick up Barrios but did not pressure the winger. Waston was pulled wide as Dominique Badji made a diagonal run. With the midfield so easily bypassed, van der Werff was forced to place himself between two onrushing Dallas midfielders, while Hoyte was left to defend Ondrasek, who had dropped off to the back post. 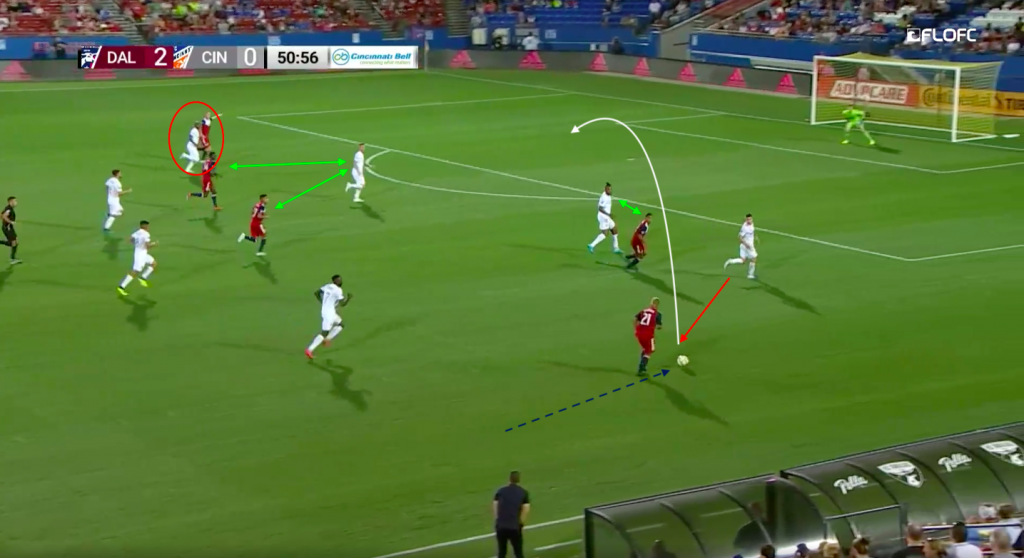 Barrios found Ondrasek on the back post as Hoyte looked on in disbelief. Ondrasek’s header was kept out by FCC Goalkeeper Przemyslaw Tyton, but once again Hoyte stood flat-footed with Ondrasek reacting first and depositing the rebound, to make it 3-0 to Dallas.

Ledesma’s 64th-minute penalty kick was set up by a keen pass from the Argentine himself. Ledesma showed great strength in shrugging off a challenge. Then, he found what many an FCC player has failed to as he played a line-splitting pass. 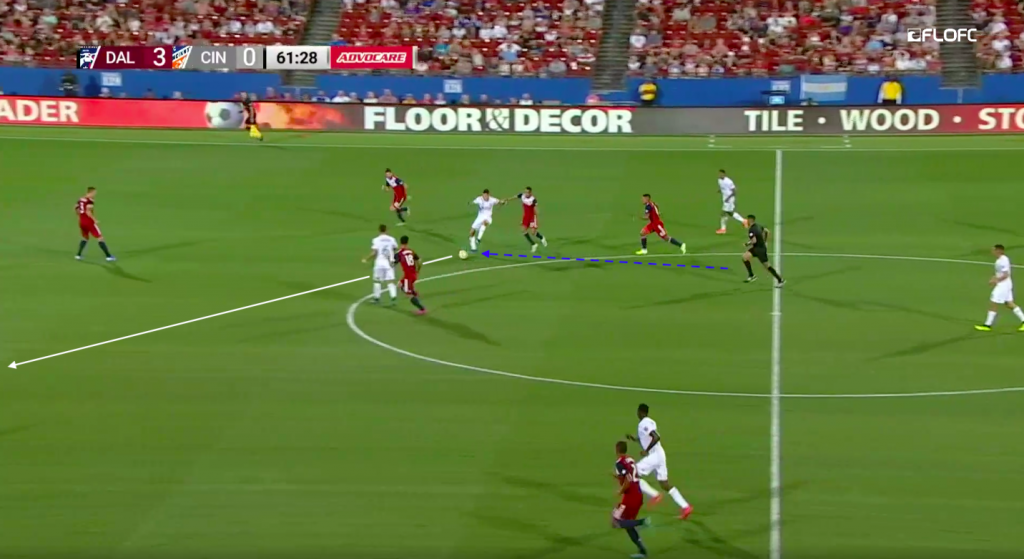 Manneh cleverly pulled away from his marker and created the space for Ledesma to pick him out. Lamah showed a burst of effort to power past Reggie Cannon, surging forward in support of Manneh. 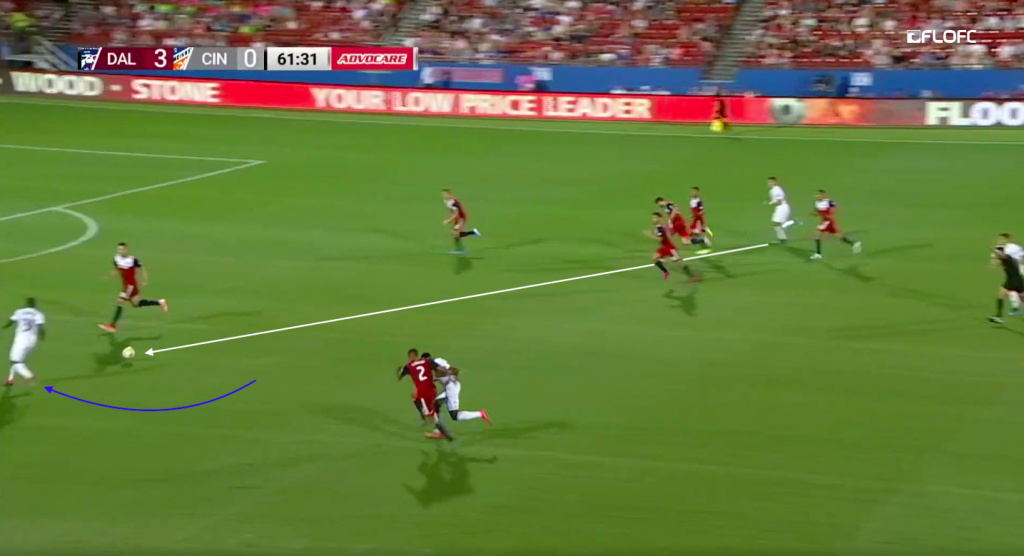 The finishing touch here was crucial, as FC Cincinnati has so often lacked the nous to create chances from these types of situations. Manneh took his first touch and pushed the ball toward the defender, driving him back and creating space for the cutback lane. The weight of Manneh’s pass was inch-perfect, and Cannon was forced into clumsily cutting across Lamah’s heels, creating the penalty, making it 3-1 to Dallas. 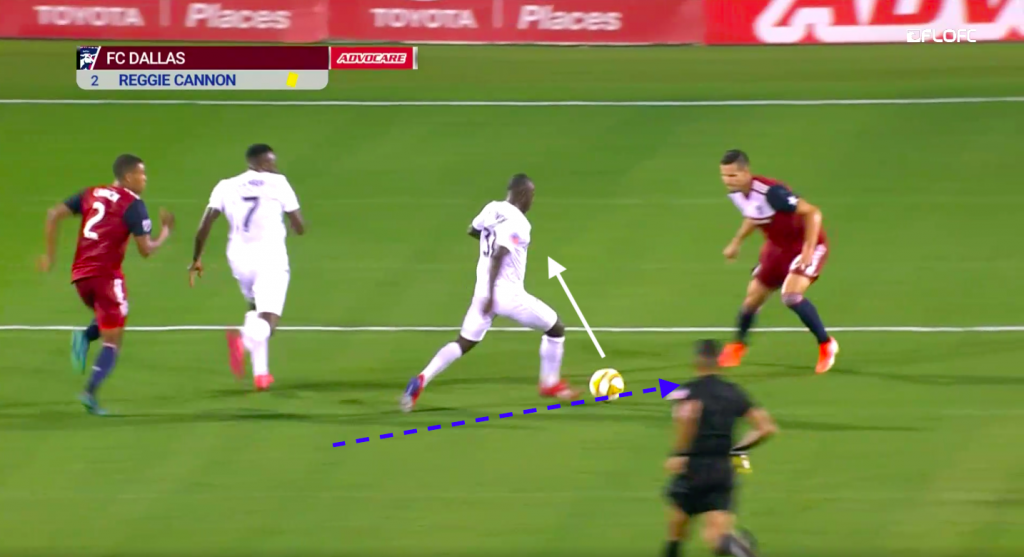 The disjointed nature by which FC Cincinnati was picked apart by FC Dallas is a bit concerning. However, any time a new coach comes in, players get out of their comfort zone as they are asked to consider different situations. Let’s all hope that the simple mistakes causing FCC fans so much angst are a product of players over-thinking their responsibilities, and as they get into the flow of being able to react to situations without thinking, the mistakes will start to happen less frequently.