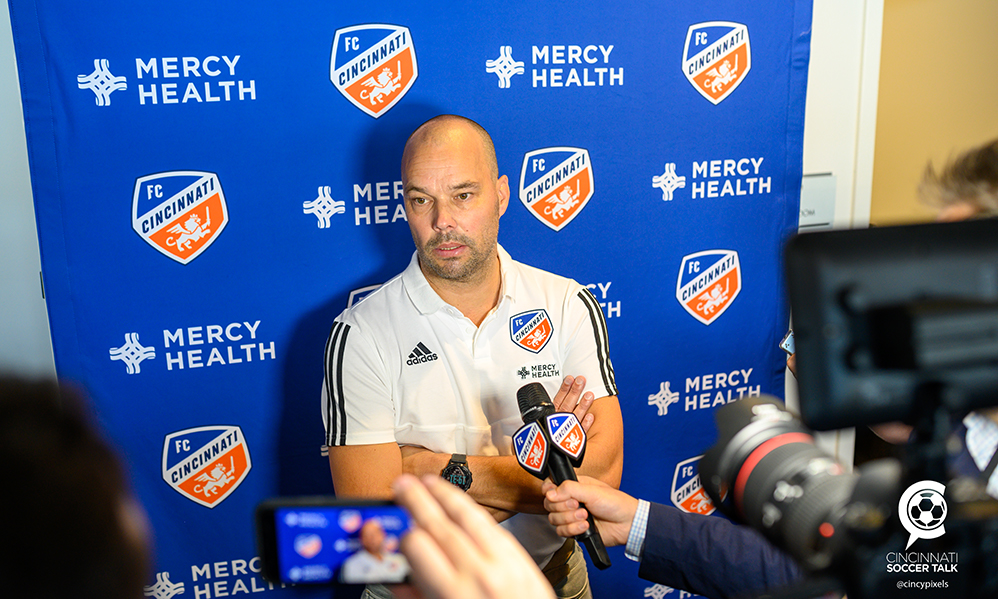 What moves should FC Cincinnati make in the offseason to be competitive in 2020? Ken Hoetker has a few ideas after crunching salaries and roster spots.

For FC Cincinnati, the 2019 season has not gone the way it imagined. For the club and its supporters, a new direction needs to be plotted out. This new direction can not happen soon enough, but unlike most vessels, the club can not quickly change course. There are factors (salaries, contract length and allocation money) that are already in motion that must be handled carefully by general manager Gerard Nijkamp, coach Ron Jans and technical director Luke Sassano, or the club could end up in worse shape.  This offseason also has the MLS players’ union negotiating a new collective bargaining agreement, and if there is any major change in salary cap increase, that could help FC Cincinnati alleviate its roster construction. However, without knowing the outcome of the CBA, I  have come up with a few thoughts that FC Cincinnati can implement in the offseason to help improve itself on the pitch for the 2020 season.

1) Drop the dead weight
I am going with the obvious here, but FC Cincinnati needs to remove players who were non-factors during the year and do not fit the style the team is headed, and the expensive ones need to go first. Fanendo Adi ($1.9 million) is the one that fits these criteria the most. From the outset, Adi has struggled to fit in, not with just with the style but with the fans as well. To Adi’s defense, FC Cincinnati did not provide players to match his style, and that compounded the issue. FC Cincinnati needs to move on from him and try to receive some transfer money in exchange. Other players that need to be moved are Alvas Powell ($250,000), Darren Mattocks ($520,000) and Roland Lamah ($800,000). These players have not produced anywhere close to their cost.

**Note: the team can’t just drop players who hold a guaranteed contract for 2020. They need to move this type of player, and Adi fits this role. Also, transfer fees could be built-in, and the team could lose allocation money if they are dropped before fulfilling the contract. Lastly, FCC is allowed to buy out one player contract, and if FCC can’t move Adi then they should buy him out and find that creative midfielder to open up the offense.

2) Caleb Stanko or Leonardo Bertone?
This is a question that FC Cincinnati has to answer. Both these players fill roles that seem to overlap, and the cost of both players is significant enough that the team is allowing money to go to waste on the bench. Stanko ($300,000) is more the defender, while Bertone ($500,000) is more the pivot/distributor. Victor Ulloa is good at both but not great, however having a lower price tag means Ulloa is a great option to provide 1,500-plus minutes in rotation/relief. Between Stanko and Bertone, my personal choice is Stanko, mainly due to cost and I think FCC can get a better return with Bertone in the transfer market.

3) Only fill 18 of the 20 senior roster spots
The only roster spots that count towards the salary cap are spots 1-20.  How does this help FC Cincinnati? By only filling 18 or 20 senior spots, this allows the front office to spend more on the 18 individual players. Regardless of what many may think, players that make more money generally outperform those who make less. Cincinnati has some financial constraints that will hamper its 2020 campaign, and I would rather the team have higher paid players on the pitch. Also, by not filling spots 19 and 20, the team will have these spots available during the summer window to fill with players that become available. Or maybe if the team is in a playoff battle it can add reinforcements.
**Note: During the summer window designated players only count for half their salary caprate, so it can be beneficial to wait for those spots.

4) Sign Derrick Etienne Jr. and draft a Generation Adidas player
If the team only fills 18 of the 20 senior roster spots, then the team needs to round out roster spots 21-30 with players who can contribute. Etienne, Andrew Gutman and Frankie Amaya all hold roster spots outside the top 20 and have shown their value. Etienne is currently on loan but FCC has the option to buy and this would be a smart move to add that roster versatility. If FC Cincinnati drafts another Generation Adidas player, that would give the team four players, all under the age of 24, with the potential to provide significant playing minutes and whose salaries do not go against the salary cap. That is the type of roster flexibility the team will need.

5) Navigate the expansion draft again
FC Cincinnati did not do so well the first time around, but with two new teams — Nashville SC and Inter Miami CF — entering the league, FCC can try to navigate this terrain as a member of MLS. FCC really needs to find an inexpensive gem that MLS teams will leave exposed. FC Cincinnati should try to get either Miami or Nashville to draft a player for them in exchange for some TAM or GAM (Please stay under $150,000 xAM). I would prefer a young, lower-priced player (under $200,000) that has some experience and fills a need. By grabbing a low-cost player with 500-plus minutes played, there is a lower risk if they do not pan out. My favorite example from last year was Florian Valot ($70,000) — yes I will beat that dead horse. An American keeper that is of starting quality would also be a good fit here.

6) Remove questionable internationals
International spots are coveted assets. The team is going to need to make some tough decisions this offseason, but ultimately I think they should move on from Justin Hoyte and Przemyslaw Tyton for the international spots alone. I am not clear of Logan Gdula’s development, but coming out of college he was a highly desired outside back, and he should be able to fill in during times of need. The team also needs to look hard for an American keeper. Again maybe the expansion draft is a spot to fill this. If FCC doesn’t fill all their international spots, it would be smart to acquire more assets (TAM/GAM) for the 2021 season by trading one away.

Below are a couple of aspects the team should consider. These are not necessarily my favorite options.

A) Yellow line players
I said FC Cincinnati needs to drop the dead weight for my first bullet point. However, there are a few players that tread on the side of expensive for what they bring to the table, and the team has to consider moving these players, I call these the Yellow Line players. The players that fit this profile are Kekuta Manneh ($390,000), Greg Garza ($270,000), Tyton ($330,000) and Emanuel Ledesma ($280,000). That last one I expect to take some heat for, and I understand the love for him, but his price tag and international spot hold too much value. If Ledesma gets a green card, that could factor into keeping him. Both Stanko and Bertone fit in here, but as stated above one needs to be kept.

B) Become a Seller
If you didn’t like my last point, then you will most likely hate this thought. I am the biggest Allan Cruz fan — he is my personal favorite — but FC Cincinnati must consider selling him if they can make a serious profit. This consideration is heightened if FC Cincinnati only holds his contract through 2020. I absolutely love this guy, but the best interest of the team may be selling him. Another player that fits this potential is Amaya.

Feel free to write back at feedback@cincinnatisoccertalk.com if you agree or disagree. Just remember it is easy to say release these five, six, 10 players and backfill them, but in a salary cap league, it is not always that simple.