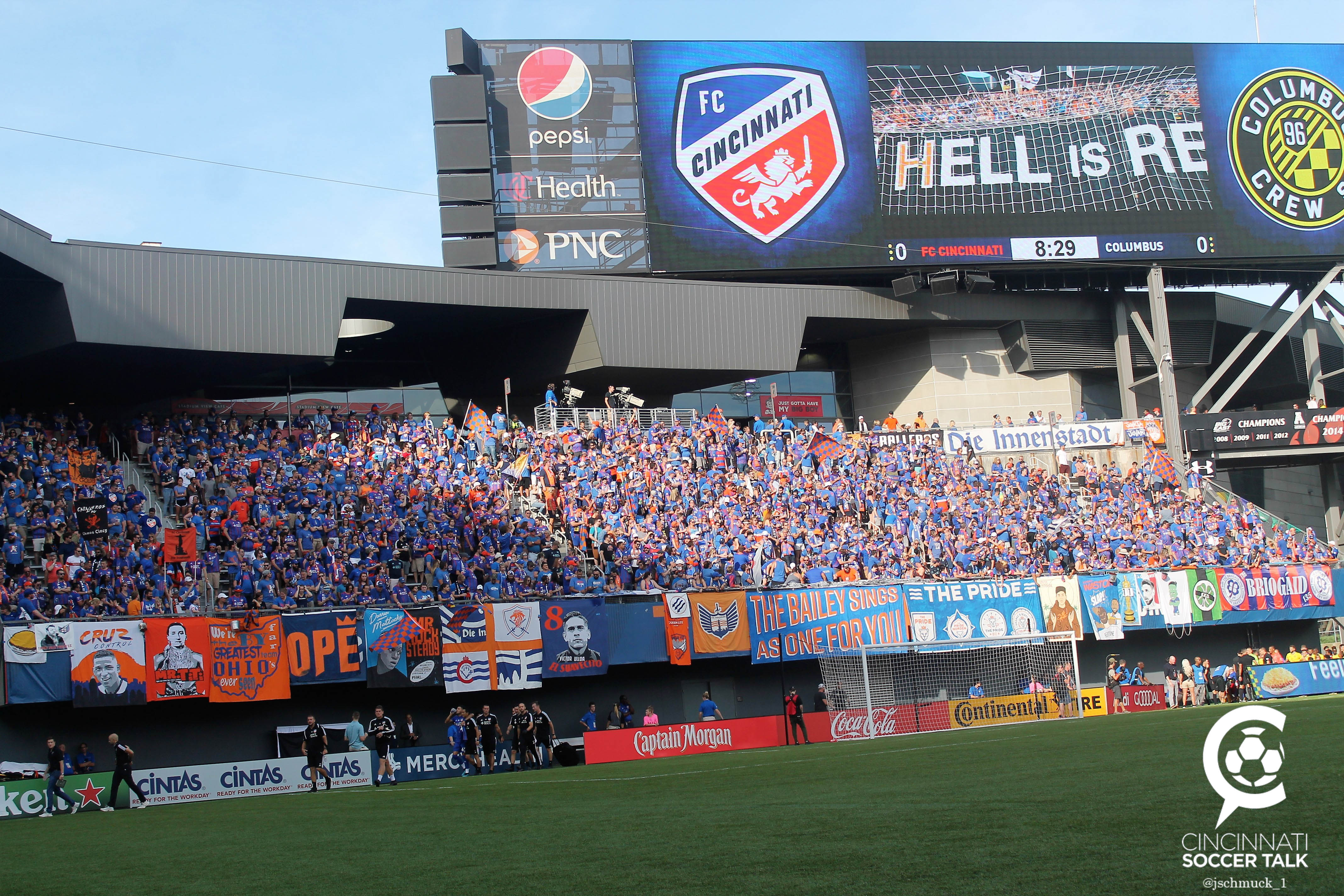 FC Cincinnati got smoked in the Hell is Real Derby 3-1 by the Columbus Crew. Here are our player ratings for the match.

Hello Cincinnati Soccer Talkers! I’m back after a couple of weeks abroad, and so are our Player Ratings. FC Cincinnati got smoked in the Hell is Real Derby 3-1 by the Columbus Crew. Gyasi Zardes netted twice, and Luis Diaz added a third in the first half. Kekuta Manneh landed a late consolation goal in the 89th minute in front of another 30,000-plus crowd at Nippert Stadium. Now on to the Player Ratings!

Tyton was failed by his defense on all three goals. The failure to close down passing lanes left the Polish keeper 1v1 on several scenarios, which is tough for any keeper. You’d like him to have made a better play of the ball for the third goal, but Diaz’s shot combined with Tyt0n having to deal with a possible Zardes run left enough of the goal open to put the match to bed in the first half.

It was a tough night for the young defender in a big match at home. In the first half, the Crew went straight at his flank, and with little cover from Roland Lamah, Gutman was taken advantage of. In the first goal, he whiffed on a tackle that would’ve broken up the play. For the third goal, Diaz was more physical and ran right by Gutman. On the offensive side of the ball, he was too indecisive at times. While he improved in the second half, too often he ran up the flank and missed his moment to cross the ball into the box. With all this said, you can still see his promise. FC Cincinnati fans need to keep in mind that this is his first year as a professional and just his third game in MLS. The ceiling is high for the young left-back, but with youth will come times where he’ll have the inevitable stinker.

We might have to rethink Waston’s ability to play in a pressing formation. This isn’t so much about Waston playing poorly but the fact that he’s being put in a tough spot when FC Cincinnati is unable to hold possession. The Costa Rican just isn’t fast enough to compete with fast strikers running towards his own goal. I love his effort, I love his heart but not sure the club is setting him up for success.

Kind of similar to Waston. Van der Werff can distribute the ball when he steps into the midfield, but against a fast striker running towards his own goal, he’s going to struggle. In the second half, I thought he did well but until FC Cincinnati can consistently hold the ball, he’s going to have a hard time.

With Gutman deployed as the wing-back to get forward, Deplagne had the responsibility to stay at home and defend. While I don’t place a lot of blame on him for the first two goals, he still could have tracked Zardes’s run better. The forward did a nice job to pick out the open spot between van der Werff and Deplagne, and neither could do much about the goals. Deplagne has been a consistent performer for FC Cincinnati this season, but it looks like he might be running out of gas.

Don’t need to worry about Stanko if you can just play over him. The Crew bypassed the midfield on the break, and there was no one to break up the play in front of the back four. With several players in the first half out of position on the break, Stanko was left with too many defensive responsibilities, and that left passing lanes open. When FCC switched to a 4-2-3-1 in the second half, he did better, but then you need him to open up play more with his passing. Not sure what coach Ron Jans does at CDM from here, but I think you give Leonardo Bertone a shot to see what he can do.

Too many giveaways will kill a club, and Ulloa fell victim to that Sunday night. Ulloa completed just 66% passes, including 5 of 14 in the attacking third. FC Cincinnati and Ulloa can’t keep giving the ball away easily if Jans wants to play a high pressing setup.

Cruz was involved in three serious chances for FC Cincinnati. He set up van der Werff early in the first half with a great ball over the defense that the center back put just wide. In the 56th minute, he laid a ball off to Derrick Etienne  Jr., and in the 66th minute forcing a tough save from Eloy Room that the Crew keeper tipped just over the bar. He is one of the few players right now able to control the ball in tight spaces and is one of the few players that I’m high on for 2020. It’s on general manager Gerard Nijkamp to surround him with better talent next season.

Tale of two halves for Lamah. He was 5 of 14 in passes in the first, while he was 13 of 17 in the second. It was like watching a different player. While he partnered well with Kekuta Manneh in the second half, I expect Jans is going to have an issue how he left his young right back out to dry all night. With the speed of Harrison Afful and Diaz, Lamah needs to be more aware of his positioning and help contribute on the defensive side of the ball.

The new arrival wasn’t able to get into the build of play for FC Cincinnati, especially in the first half. When FC Cincinnati started to play with pace in the second half, Etienne nearly picked up his first in Orange & Blue in the 56th minute.

When you are subbed out at halftime and then postmatch the coach talks about certain players not running his system, it’s easy to put two and two together. Mattocks completed two passes and had zero shots in the first half. It was a dramatic difference to Manneh, who came in at half and energized the defense. When Jans talked about players not pressing at the same time, you could look to Mattocks. He seemed more interested in picking the keeper’s pocket than systematically pressing and causing turnovers. All it takes is one player out of position for large passing lanes to open up, and the Crew got FC Cincinnati for three goals on transition.

Manneh came in for the struggling Mattocks and served as a lightning bolt for the attack. Because he isn’t a lone striker, Manneh had to drop a little deeper to get on the ball and then played several dangerous interchanges with Lamah. I don’t know if it was playing against his former club that gave him energy, but it was nice to see. Manneh has disappeared too many times this year, but hopefully, this can be the start of a turnaround under Jans.

He scored a -5 in the Audi index but I thought it was his substitution that had a big role in FC Cincinnati being able to hold possession. Bertone and Ulloa did a better job of connecting the midfield to disrupt passing lanes for Columbus.

The Argentine brought more life to the Cincinnati attack when he was substituted in the 75th minute for Etienne. It was Ledesma’s pass that found Manneh in front of goal for his 89th-minute strike. It’s dissecting passes this season that the FC Cincinnati attack has struggled to make, and Ledesma has been one of the few to have success.