In this edition of Talking Tactics, our Brad Gough says FC Cincinnati suffered from a lack of midfield creativity in Saturday’s loss to NYCFC

FC Cincinnati stumbled to a 4-1 loss at the hands of New York City FC on Saturday. Despite this scoreline, the performance has been roundly touted as an improvement over other recent losses. The team showed some good defensive aggression and ability to create a few more chances than of late but struggled to make any inroads down the middle of the park.

No Way but Wide

NYCFC came into Saturday’s game with the plan of forcing the FCC wings and outside backs to beat them. It packed the middle of the field and cut off passing lanes to Darren Mattocks, Allan Cruz and Victor Ulloa, who instead had to move into wide areas in order to get on the ball. A look at their touch maps shows this: 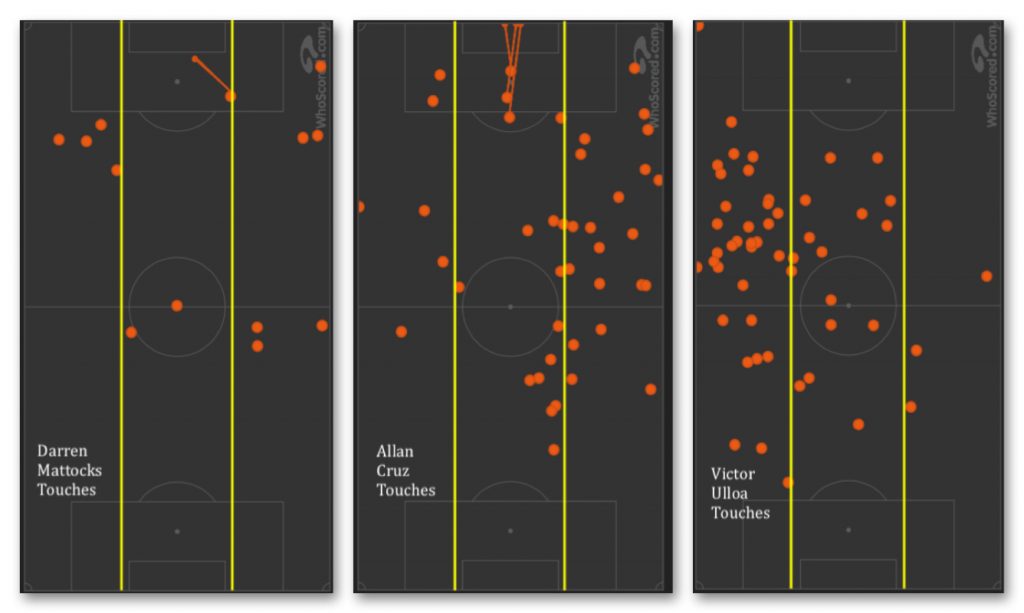 With FCC’s central attacking players constantly checking wide to influence play, the team was forced into playing in front of the NYCFC defense and achieved virtually no penetration.

FC Cincinnati fans have been saying since before the season started that the team was in need of a creative midfielder to round out its roster. The play of Frankie Amaya and Allan Cruz has quelled this concern ever so slightly, but the lack of a No. 10 to play in between the lines and help the team achieve central penetration was never more evident than against NYCFC.

Against NYCFC, Allan Cruz played in the No. 10 role. With the Cityzens remaining disciplined in their approach to limit FCC’s central touches, Cruz too often pushed forward instead of checking into space between the lines. This forced the Orange and Blue to play negative, as below, or play into pockets of tight space on the wings. 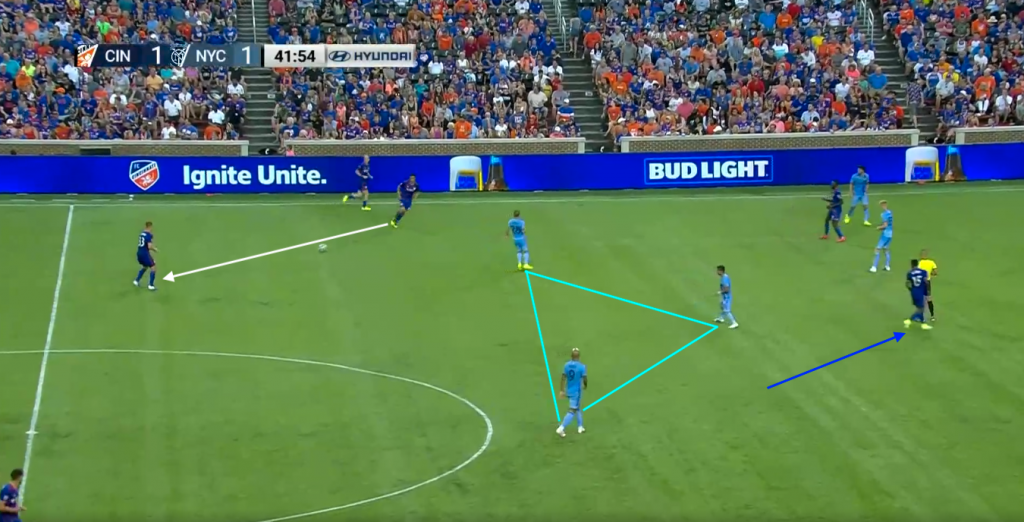 Even when NYCFC’s midfield shape left gaps to exploit, Cruz was often not willing to do so. In the sequence below, Ulloa looked for a chance to play Cruz between the lines, but the Costa Rican pressed forward, asking for the ball to be played wide instead. 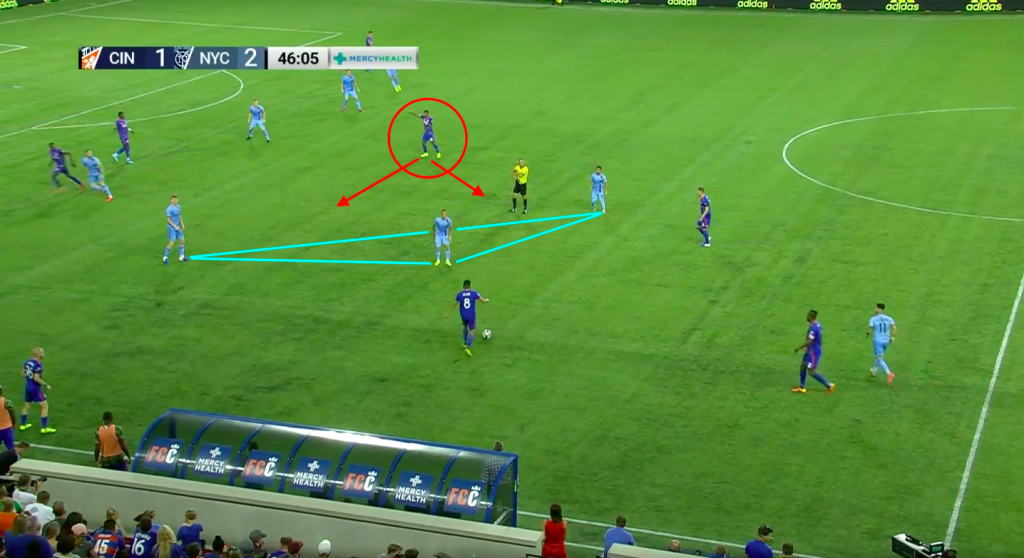 Ulloa obliged and gave the ball to Andrew Gutman. Again, there was an opportunity for Cruz to exploit the gaps left by a poorly positioned NYCFC midfield, but he stood waiting for a potential cross. 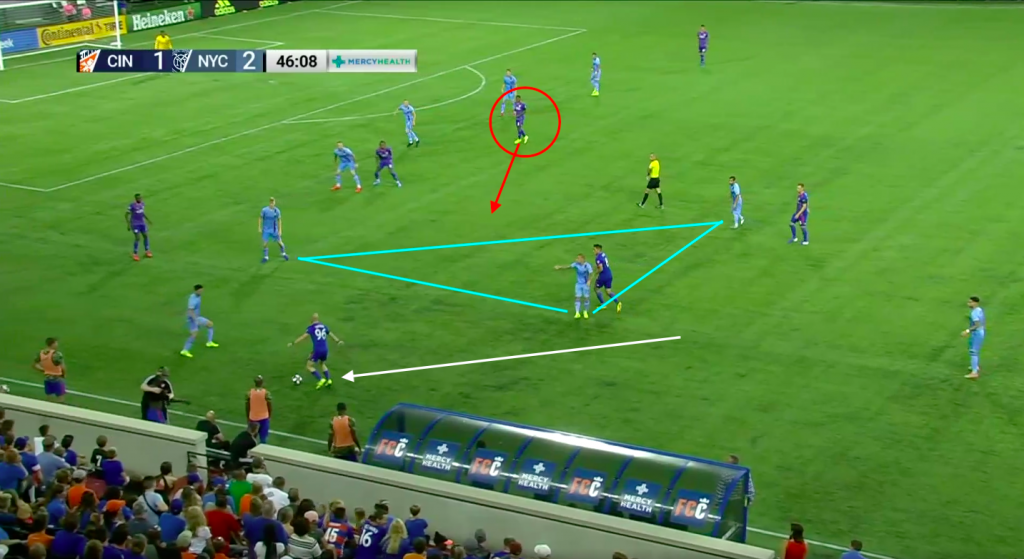 Instead, Ulloa made a quick run into the open space to give Gutman the option, but the turn was too tight, and his touch gave the ball away. 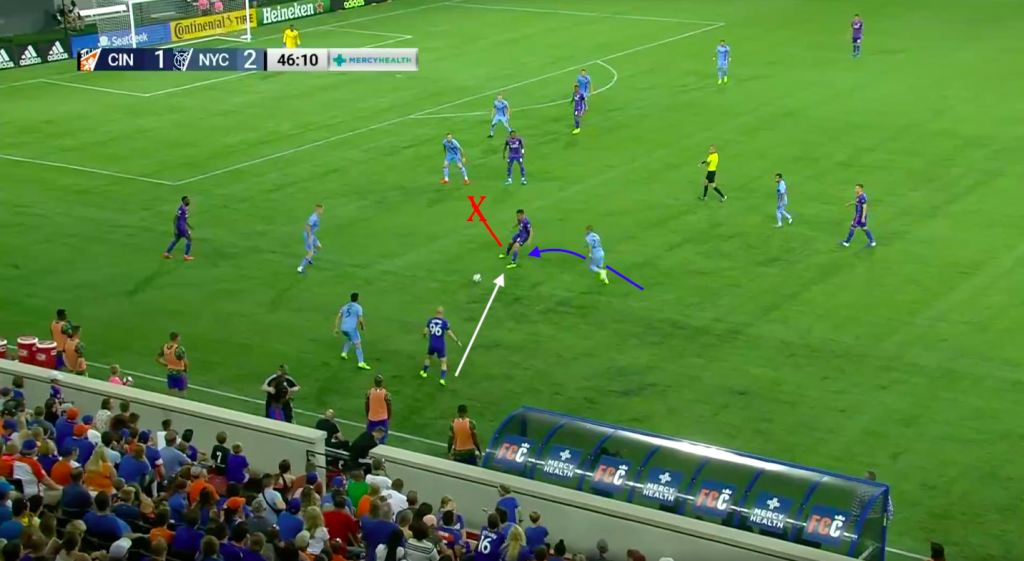 Getting Amaya back from injury could help with this problem, as we’ve seen the youngster be more than willing to move into spaces between the lines to get on the ball frequently. However, until an FCC midfielder starts to take the onus of demanding the ball centrally and attacking down the middle, defenses will continue to cut off central passing lanes without allowing outside players enough space to do any real damage.

NYCFC’s back line was disciplined and compact through much of the match as well. Even when FCC was able to make headway down the wings, the Cityzens back line sat back and easily won most crosses due to the fact that there was little threat of the FCC midfield effecting play in order to pull the back line out of shape. 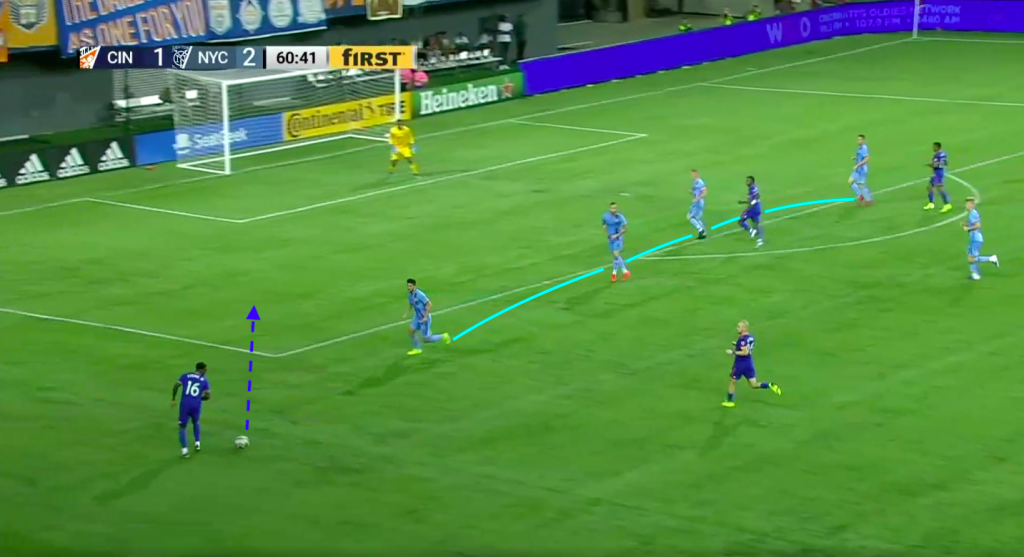 In this chance from the 60th minute, Derrick Etienne Jr. found himself 1v1 on the wing against Eric Miller. He dribbled at the outside back, waiting for Cruz or Mattocks to make a decisive run. Mattocks stayed planted centrally with no hopes of getting the ball. Etienne’s dribble created a wide-open cutback lane (yellow), but Cruz elected to stay at the top of the box. 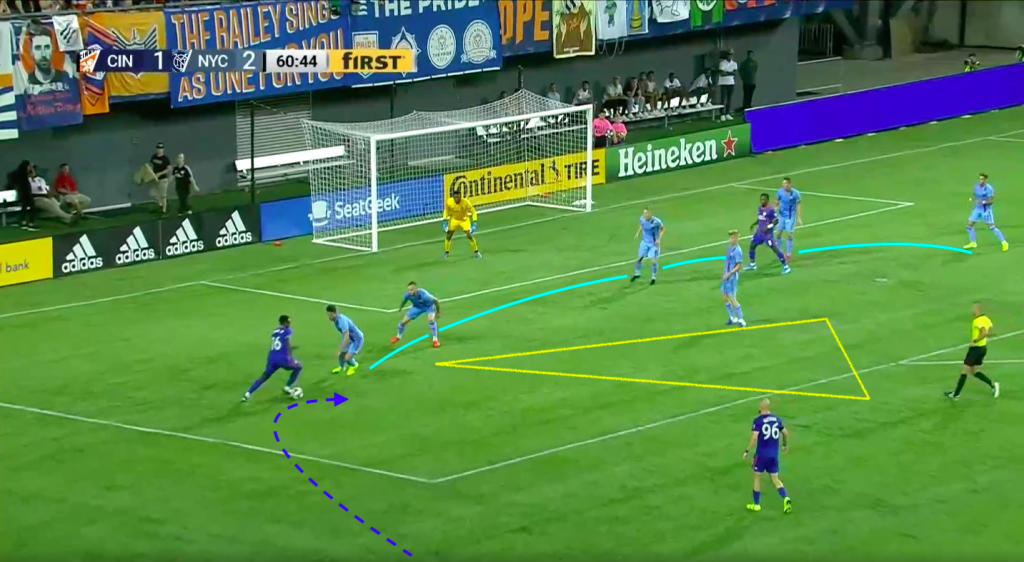 Cruz delayed his run a bit, and Etienne squeezed the ball into him, but the NYCFC back line was compact and kept the play in easily in front of them. Cruz had no room for error, and a poor first touch squandered the chance. 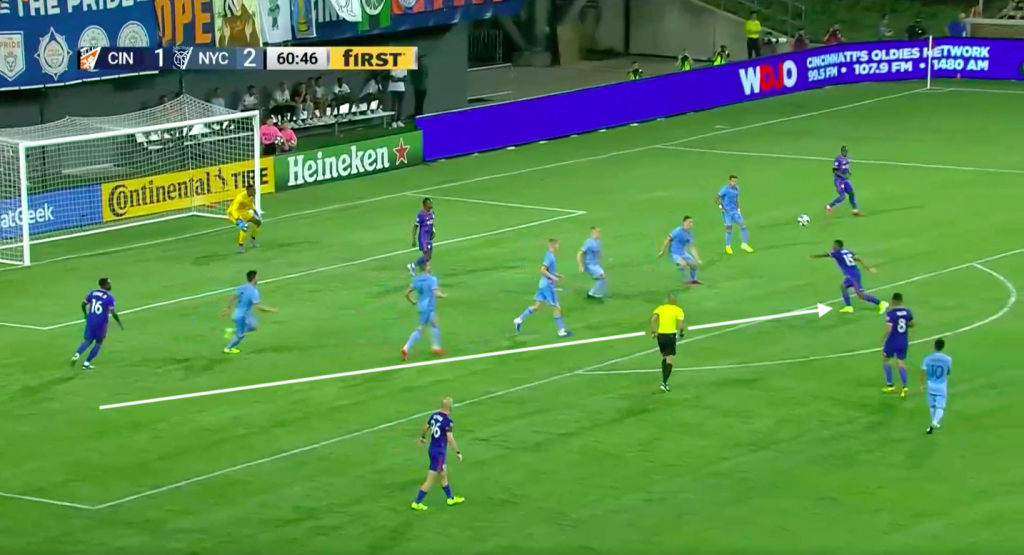 Even in the goal that Cruz did score, he didn’t do much to create the chance. Instead, as he delayed his run just in front of the NYCFC back line, it was Gutman’s superb ball that did the work of allowing Cruz to get off the one-touch shot. Had the ball in not been perfect, there was every chance that Cruz’s shot would have looked much more like the chance above.

No Midfield, No Problem?

Any time a team’s outside backs lead the team in touches, that team is going to have a hard time scoring goals. This was the case Saturday, as Gutman and Mathieu Deplagne were 1 and 2 in this category. Contrast this to NYCFC, who had midfielders Maxi Moralez (the No. 10) and Keaton Parks (the No. 8) leading the way.

FCC went toe-to-toe for much of the match with NYCFC, a team that many tout as the best team in the Eastern Conference. It created some chances and could have been up by two early in the match had Emmanuel Ledesma converted his penalty. However, the lack of midfield creativity made it far too easy for the Cityzens to keep FCC on the periphery of the field. Hopefully Amaya will return soon and help out with this, but if FCC is going to be competitive in matches like the one on Saturday, it is going to need more than just the young American.