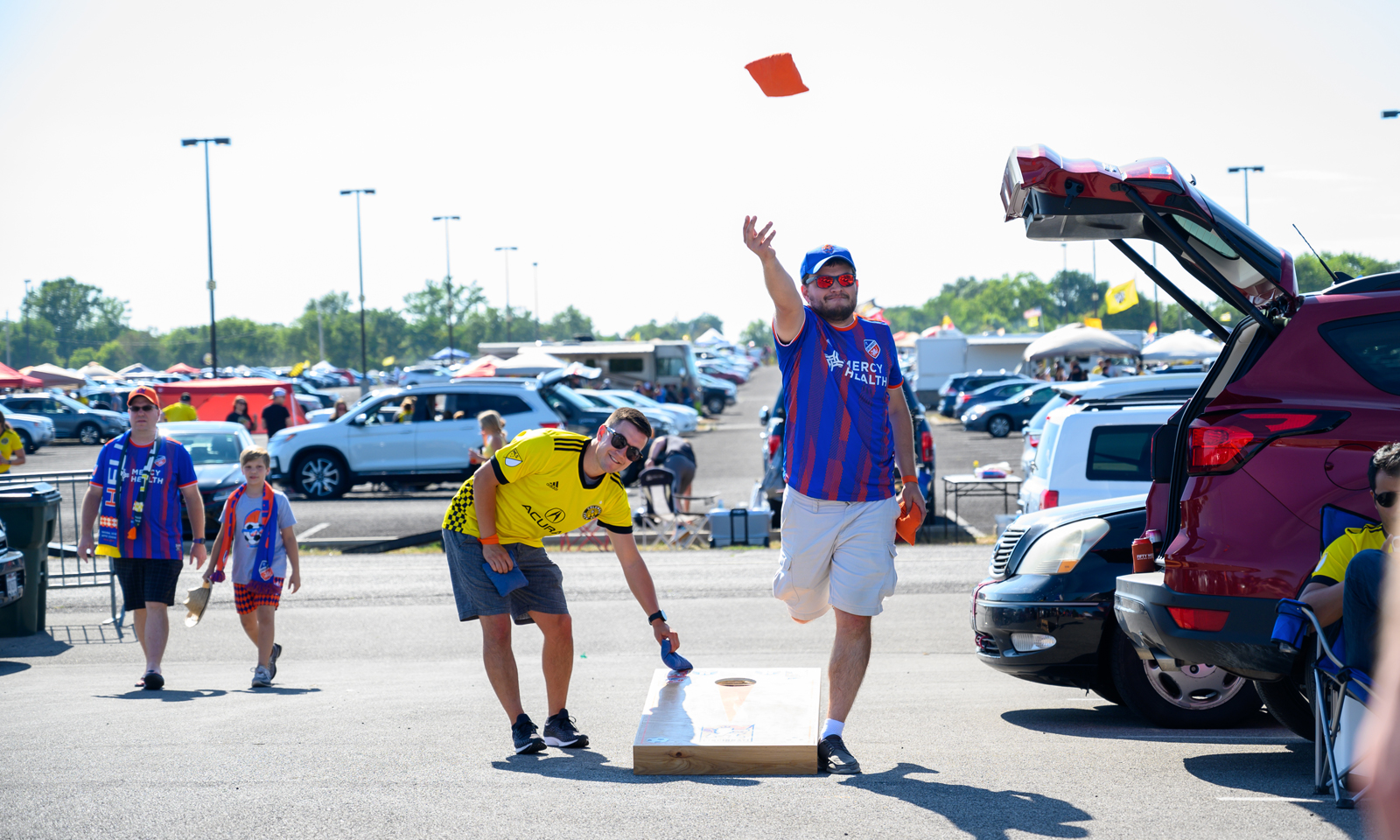 Seubs looks back on a fun day in Columbus as FC Cincinnati hangs on for dear life in Round 1 of Hell is Real against the Columbus Crew.

I found out on Sunday morning that it is entirely possible to wake up with a hangover despite not having one drop of alcohol on Saturday at the match. My first Hell is Real experience in person was something I will truly never forget. The roller coaster of emotions one experiences at these events are awesome and why we love sport in general. Saturday afternoon I was making the two-hour trip to Columbus just hoping FC Cincinnati wouldn’t get blown out. “Please don’t let them get embarrassed in this first one…. I’m ok with losing, just please be competitive.”

But as wave and wave of Orange and Blue fans started piling into Lot R where everyone was tailgating, I found my levels of optimism for the match increasing. With each CST fan that stopped over and said hello, I’d ask them how they were feeling about the match going in. Each answer was unique and offered up a reason for why they were going to walk out of MAPFRE Stadium with a win. And for a moment I allowed that positivity to creep in. I went from submitting my Growler Cup pick of losing 3-1 to then thinking out loud that the Club could win 2-1.

From the moment the match started, it just felt different. It seemed as though the Orange and Blue had a different spirit about them. Was it because this was a derby? Was it the new additions of three solid players? Was it the new coach bump? Probably was a little bit of all three if I’m honest. From our top row seats at MAPFRE, it was great to see everything unfold. The pressing from FC Cincinnati was intense and forced a lot of early Columbus errors.

After the 30th minute and with a 2-0 lead, it was like all that steam and energy seemed to vanish. Ron Jans hinted at this in his introductory press conference that if you don’t condition for the high press in the preseason, it’s really difficult to implement midway through a campaign. In the end, Columbus may have been gifted a penalty that wasn’t. The goal to level the match was brilliant. FC Cincinnati did just enough to walk out with a draw, and I mean barely just enough. Here’s to hoping Round 2 at Nippert in a few weeks is just as exhilarating.

Andrew Gutman is the Real Deal

I don’t mean any disrespect to Mathieu Deplagne or anyone else who has (or hasn’t) played left-back for FC Cincinnati this year, but wow what a difference it made to have a proper left-back playing in that role Saturday night. It is very clear how comfortable Gutman is going forward. His pace and overlapping ability made him a constant threat on that left flank. He was playing so far forward for most of the match that at times it almost looked as if FC Cincinnati were lined up in a 3-4-3. He did the work on both ends, getting back to thwart a few Columbus counterattacks as well. I walked away from MAPFRE with a great feeling about these last nine matches and the 2020 season with him on the pitch for FC Cincinnati.

A few weeks ago on the podcast, I asked for your emails about FC Cincinnati’s goalkeeper position. Many of you emailed in defending Spencer Richey, many of you also emailed in stating Przemyslaw Tyton should be getting a look. What a performance Saturday night by the Polish international. Titi singlehandedly kept the Orange and Blue level late in the match. The question I now ask you is, would Richey have made those saves? Has Titi locked down a starter’s role? If indeed Jans does make the switch, hard to argue after that MLS Team of the Week performance. We’ll see what happens once Richey’s back to full health.

I miss Tailgating for Games

I absolutely loved being able to tailgate for this match. That experience alone is something I will do every single year of this rivalry whether I have tickets or not. Of course, that will all go away too once Columbus opens up its stadium downtown, I assume. Don’t get me wrong, I enjoy the bar scene in Cincy and things will obviously change once the new stadium in the West End opens up. But I thoroughly enjoyed being able to tailgate for this one. It’s because it meant I got to see all of the friends I have amongst the different supporters’ groups all in one spot rather than multiple bars across Clifton.

Last week my wife asked me this question: “Why is it so important for you and the kids to go to this game?” My head couldn’t turn fast enough for me to say “Are you kidding?” There is no way I’m missing the opportunity to say I was at the first MLS version of Hell is Real. I had already missed the first U.S. Open Cup version, but no chance was I missing this. I wanted my kids to also be able to say they were at the first MLS version and experience their first tailgate too. Even if it meant them sitting in my car draining the battery so they could charge their devices. Huge thanks to Caleb for jumping my car after the match and allowing me to get home. You’re a legend in my book.

Liverpool dispatched Norwich pretty quickly, and West Ham offered zero against Man City. Hard to think that these two teams aren’t fighting neck and neck for the title come May.

I will say that I was pretty shocked United blistered Chelsea for four. Much better start than I expected. My only concern though is that if they experience an injury in midfield or defense, they’ll have massive problems on their hands.

Also, NBC, we get it, Christian Pulisic is an American soccer player playing in England. We don’t need a Pulisic update every five minutes. Even the line of questioning after the match to Chelsea manager Frank Lampard was tailored to Pulisic. We don’t watch the Premier League for Christian Pulisic, so quit forcing the issue with him. He’ll play when he plays.

I honestly don’t know why anyone cares what Jose Mourinho thinks. He’s single-handedly made his last four clubs worse off when he left (Inter, Real Madrid, Chelsea, United). Apparently, he’s impressed with what Arsenal did this offseason.

He then goes on to say that Manchester City’s B team would win the Premier League before Arsenal and Manchester United. Why aren’t you coaching again, Jose?

I know it would probably never ever happen, but man I’d love to see Gignac in MLS someday. He’s just a goal-scoring machine in Liga MX.

VAR headlines ruled the opening weekend of the Premier League. Lots and lots of whining about this system. Did they get the calls right? That’s all that matters in the end to me. Moving on.

Orange County SC has signed a 13-year old to a professional contract. What were you doing when you were 13? I was watching World Cup 1994. I just hope this kid does not become the next Freddy Adu.

Mike Petke has had his contract terminated by Real Salt Lake. His postmatch tirades were usually entertaining. He should know better, and I’m glad to see Salt Lake terminate his employment. His language was completely unacceptable and embarrassing to the league.

That’s all I’ve got for this week. Remember to watch your tackles, folks.

Nick Seuberling is the host of the Cincinnati Soccer Talk podcast, available wherever podcasts can be found. You can follow him on Twitter at @nickseuberling.