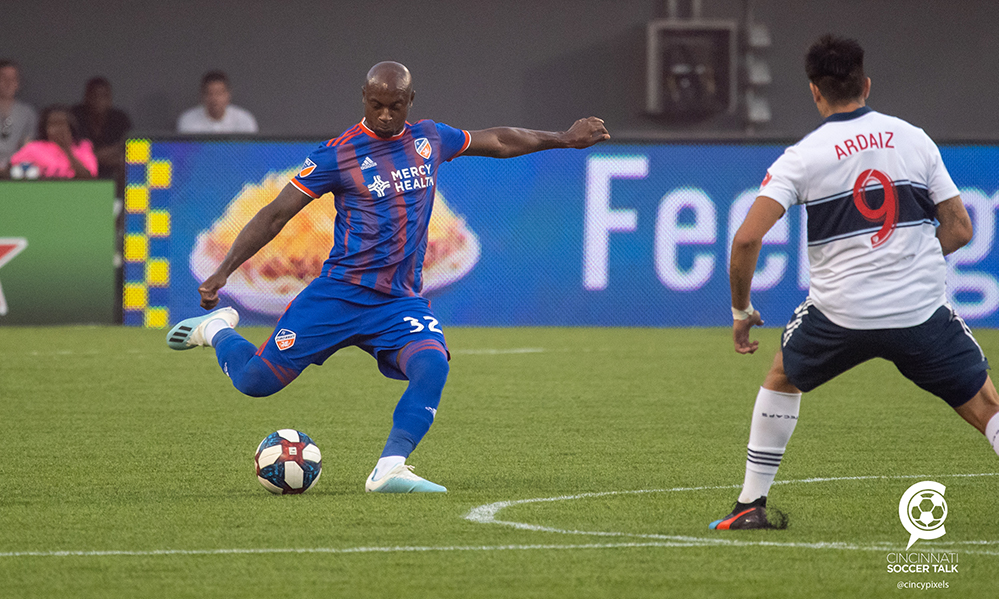 The Hell is Real Derby scene between FC Cincinnati and the Columbus Crew shifts to MAPFRE Stadium for the first time on Saturday. It will be the first match for new coach Ron Jans.

After over two years of waiting, Hell is finally Real once again. As FC Cincinnati goes into Week 23 of its inaugural MLS season, they travel about 100 miles north to take on the Columbus Crew at MAPFRE Stadium for the first time ever at 7:30 p.m Saturday. The last time Cincinnati and Columbus squared off in a meaningful soccer match was in the fourth round of the 2017 U.S. Open Cup at Nippert Stadium. FC Cincinnati beat the Crew 1-0 thanks to a second-half goal by former Orange and Blue striker Djiby Fall.

Despite the two sides claiming the two bottom spots in the MLS Eastern Conference Standings, this match should still live up to the hype and expectations that are surrounding it. While FC Cincinnati has experienced a dismal 2019 MLS campaign, a competitive match should still be expected. With emotions and adrenaline running high in rivalry matches such as this one, underdogs tend to play better than as advertised, often causing the match to be decided in the final moments.

The most notable storyline is that Ron Jans will make his head coaching debut for FC Cincinnati on Saturday. The 60-year-old coach will reunite with FC Cincinnati general manager Gerard Nijkamp, who worked together at PEC Zwolle from 2012-2017. While Jans said that he wants to play aggressively with constant pressure all over the field, it is hard to predict what starting XI he will choose for Saturday’s match. One could make arguments for several different players to receive playing time against the Crew, so several new players could find themselves in the starting XI on Saturday.

As if this match needed another story-line, Andrew Gutman could also make his debut for FC Cincinnati. The 2018 Hermann trophy winner for the best collegiate soccer player in the nation scored 11 goals and tallied nine assists while playing left-back for Indiana during his senior season. While signing a contract with Scottish powerhouse Celtic FC through the 2022 season, he will remain on loan with FC Cincinnati until the end of the 2020 MLS Season. With the level of talent that he possesses, there is a strong possibility Gutman could make his debut for the Orange and Blue if his fitness is match ready.

Even though Columbus sits 11th in the Eastern Conference standings, it has seen positive results as of late. The Crew have picked up points in each of their last four matches, including two wins and two draws. The primary reason for their recent success is that they have seen a significant increase in offensive production. The Crew have scored eight goals from six different players over the course of the four-game unbeaten streak. To put this statistic into prospective, Columbus only scored eight goals in the first 10 games of the MLS season.

Goals for the Columbus Crew this season have primarily come from two players. First is United States men’s national team forward Gyasi Zardes, who has scored a team-leading eight goals for the Crew this season. Right behind Zardes is Portuguese midfielder Pedro Santos with seven goals on the campaign. Midfielders Federico Higuain and Hector Jimenez lead the crew in assists this season, with Higuain tallying five assists and Jimenez tallying four assists. The Crew have produced four clean sheets this season, but those all came with Zack Steffen between the pipes. Steffen now is playing over in Europe with Fortuna Düsseldorf on loan from Manchester City. Look for Jans to pressure the Crew early in hopes of getting an early goal to quickly put the Orange and Blue ahead.

This derby match against the Columbus Crew might be exactly what FC Cincinnati needs to get back on track. Rivalry match-ups tend to produce exciting outcomes, and this game should be no different. With the new players and a new coach energized for this rivalry match, it would not be surprising if FC Cincinnati breaks its four-game winless streak on Saturday up in Columbus.