FC Cincinnati worked hard to apply pressure on Toronto’s Michael Bradley but still had some mental lapses in Saturday’s 2-1 loss.

Losing 2-1 on the road, to what many believe is an MLS Cup contender in Toronto FC, is not a terrible result. What’s more, FC Cincinnati showed real signs of improvement in its defensive shape and discipline. However, a loss is a loss no matter the margin, and FCC will need to continue this improvement if it is going to get back to its winning ways.

Coming into the match on Saturday, Toronto FC’s Michael Bradley boasted a better than 90% passing percentage – the best in MLS. After seeing how FCC struggled to defend between the lines against the Revolution last week, I worried that Bradley would have his way in the middle of the park. Watching the match, it appeared FCC made a concerted effort from the start to pressure Bradley, not allowing him to dictate play.

Take this early sequence from the fifth minute of the match: 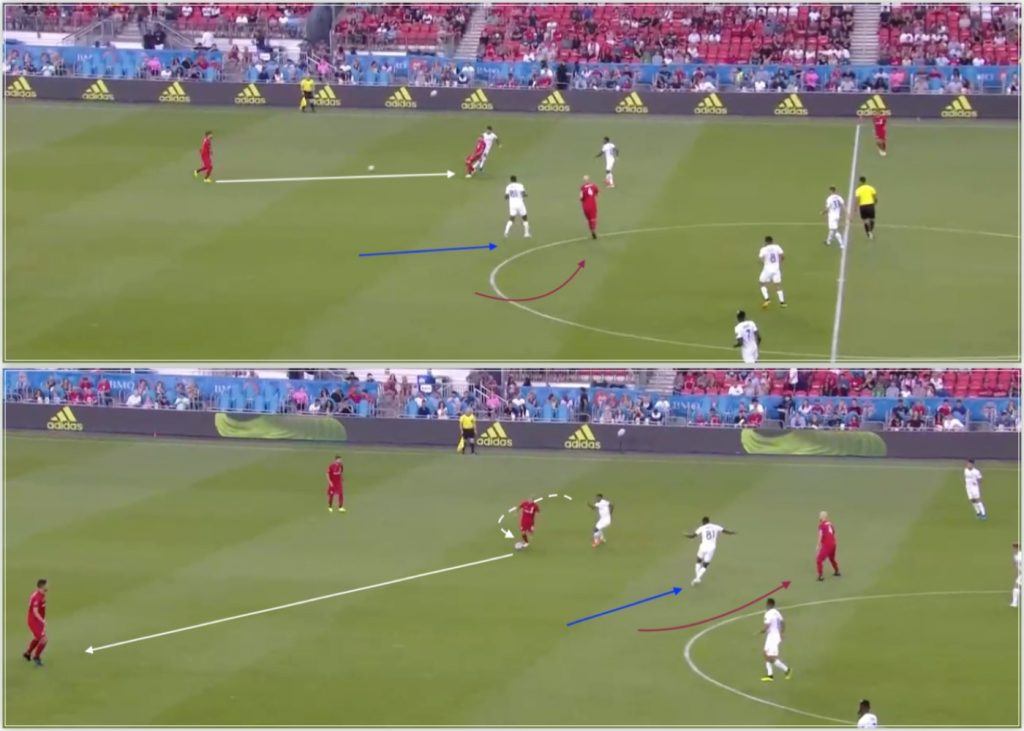 As the TFC back line shifted the ball to the left, Allan Cruz stepped to pressure Justin Morrow, while Rashawn Dally worked hard to drop back and screen Bradley from getting the ball. This forced Morrow to play the ball back to Omar González. 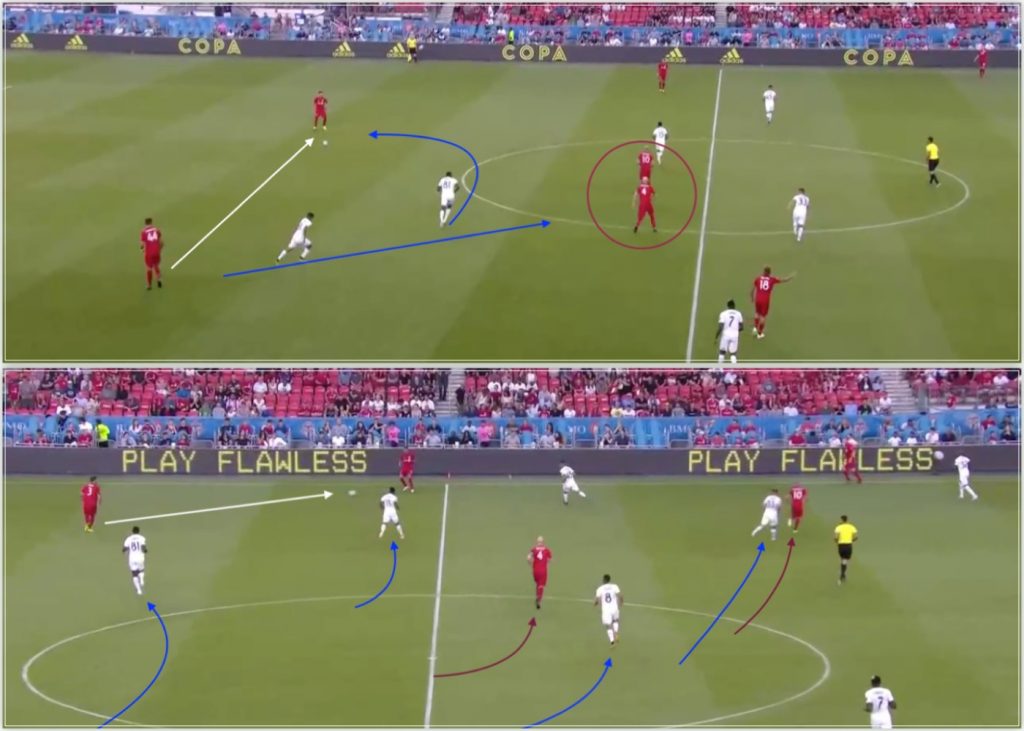 Victor Ulloa moved out to close down González as Dally continued to move laterally. Then González reversed the ball back to Drew Moor, and Ulloa turned to sprint back to Bradley’s position as Dally moved back out to pressure. Ulloa continued to follow Bradley as he moved between the lines looking for an opening. 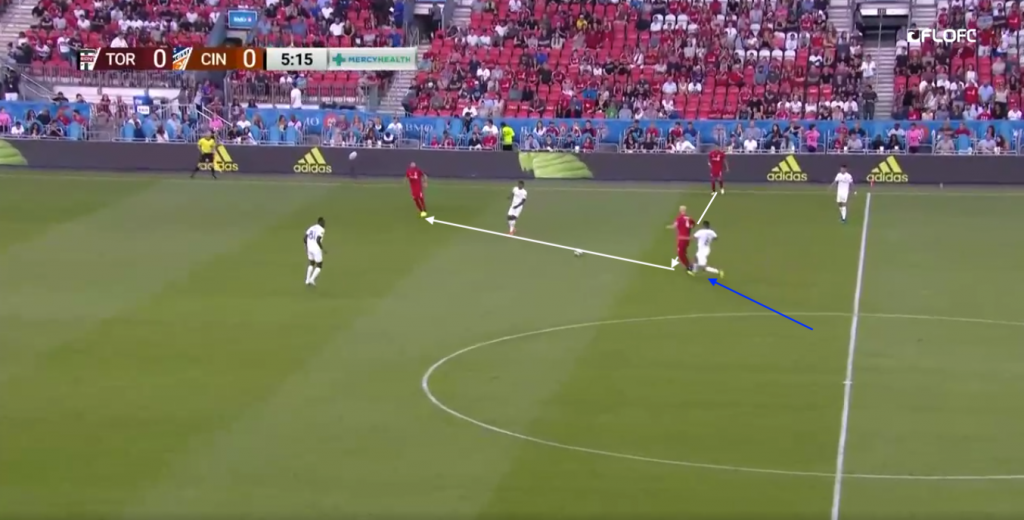 Morrow eventually found Bradley, but Ulloa was so tight on his heels that the midfielder was forced to play a simple ball back to Moor. The discipline of Cruz, Dally and Ulloa to mark Bradley out of this and many other passing sequences showed a real improvement over recent weeks.

Too Many Mental Lapses

Though this pressure was a big reason why FCC held the Eastern Conference’s fourth most potent offense to two goals, there were still many moments where TFC carved through the Orange and Blue’s midfield too easily. In fact, the sequence above, that looked so good through six passes, ended like this: 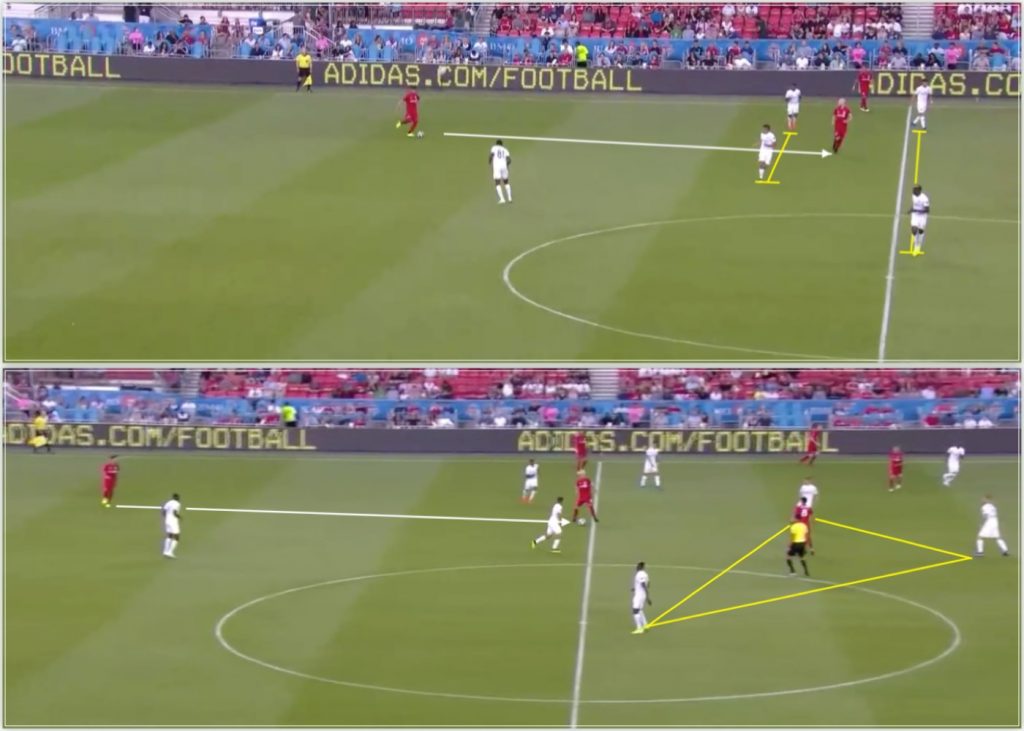 After pressuring Bradley to play the ball back to Moor, Ulloa continued to move centrally, perhaps expecting Cruz to drop and pick up Bradley. This created exactly the pocket of space that Moor needed to feed Bradley, who turned and exploited Caleb Stanko’s soft pressure on Marco Delgado. 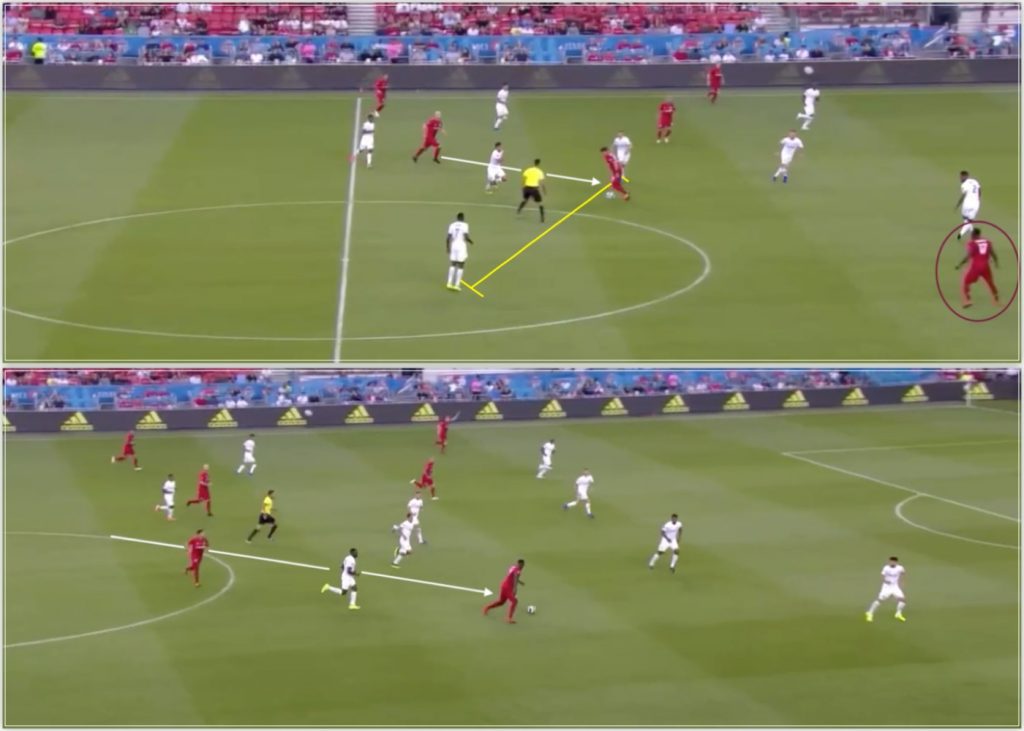 Delgado turned and found Jozy Altidore, who had pulled away from Kendall Waston, and Toronto was off to the races. The misunderstanding between Ulloa and Cruz as to who was in charge of picking up Bradley, coupled with the soft cover behind this initial line, led to an easy break for TFC.

Another issue with this club has been the defense — or lack thereof — from whoever is playing wing. Interim coach Yoann Damet has resorted to using Cruz in this position too often because the issue has been so apparent. In this match, Roland Lamah and Emmanuel Ledesma were the wingers of choice. The results were much the same, as the TFC outside backs combined for 65 completed passes, 17 of which were in the attacking third of the field, and three successful take-ons. The outside backs spent much of their time running by the FCC wingers, as illustrated by this play which led to the corner kick that was the catalyst for TFC’s first goal: 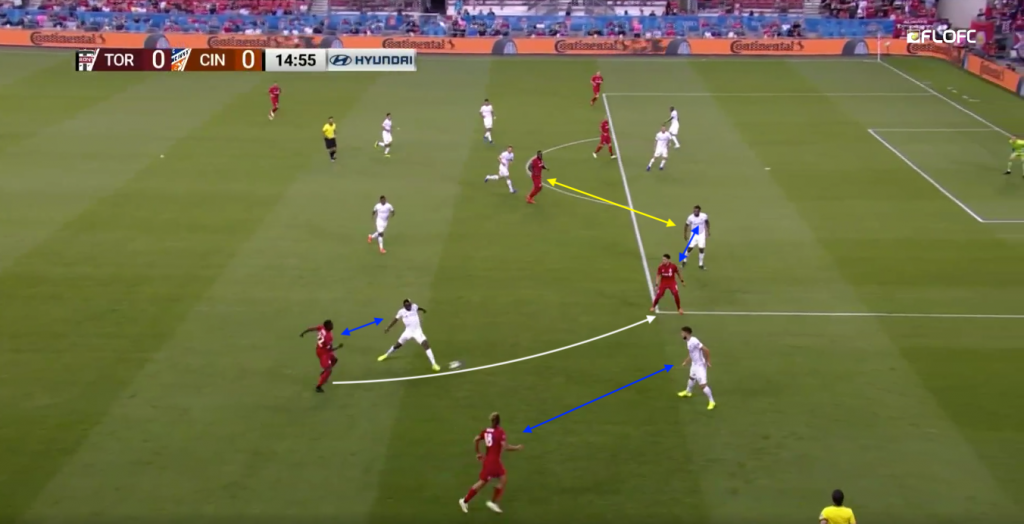 FCC started the sequence in decent defensive position, though Waston was unable to pressure Delgado tightly because Altidore had slipped in behind Stanko, keeping the Cincinnati captain’s attention. This allowed Richie Laryea to slip the ball into Delgado, who had time and space to turn. 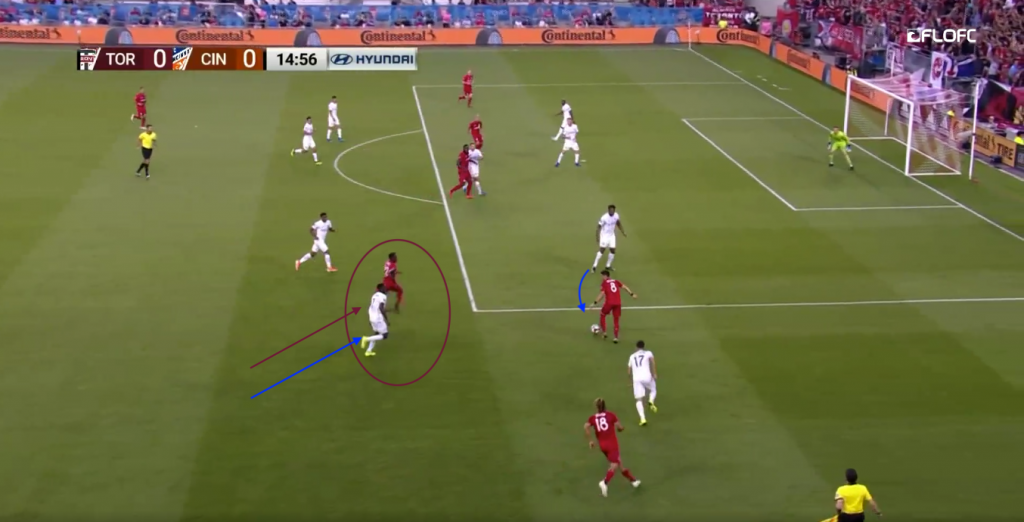 Stanko recovered goal side of Altidore, and Waston was well-positioned to marshal Delgado. However, Lamah turned off long enough to let Laryea make a run inside of him, causing Waston to have to shift to pressure Delgado toward the goal line. 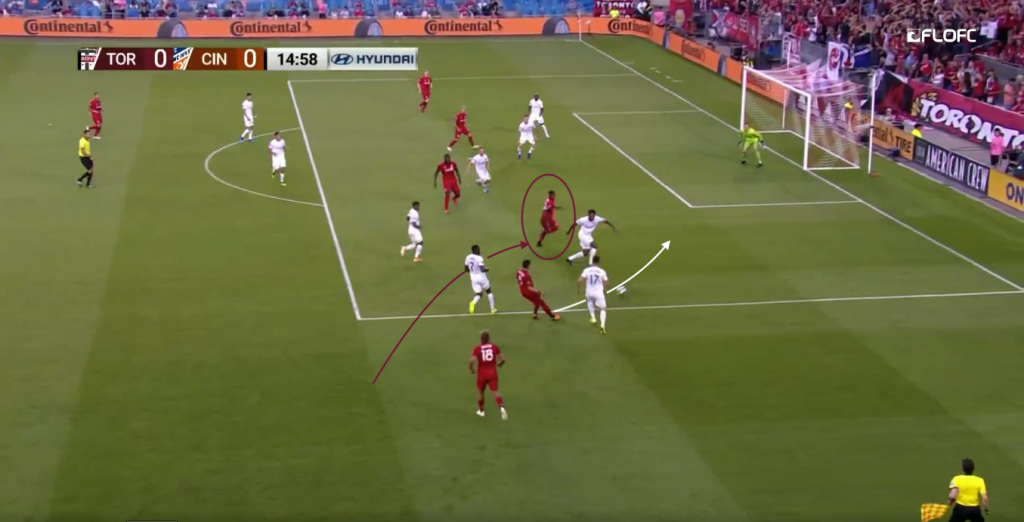 Lamah gave up even trying to stay with Laryea, and Delgado found the speedy fullback heading toward the byline. Laryea’s cutback was blocked by Maikel van der Werff, but the ball bounced out for a corner, allowing TFC to earn the set piece that led to the opening goal of the match.

This season has been a series of baby steps forward followed by toddler somersaults back. The midfield pressure displayed, specifically in limiting Bradley’s influence on the match, was a baby step forward. The bourgeoning partnership between Waston and van der Werff was another. Hopefully we won’t see any backslides this Saturday at home against the Vancouver Whitecaps.