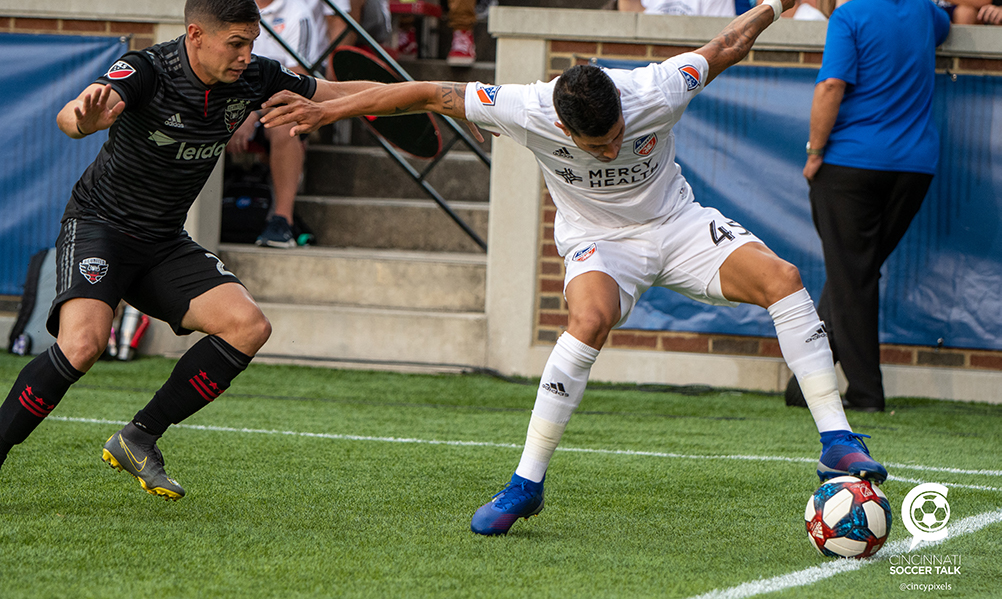 With a bevy of lineup changes because of injury, FC Cincinnati fell 2-1 at Toronto FC on Saturday. Maikel van der Werff made his first start at center back.

FC Cincinnati traveled to Canada this weekend to face Toronto FC for the first time this season. High hopes were not enough to bring home a win for the Orange and Blue. FCC fell 2-1 to Toronto FC at BMO Field.

FCC had a rough week of practice leading up to this match. Interim coach Yoann Damet was back in the same position he was in last month with injuries. Five injuries occurred over the last six days during training, according to the FC Cincinnati broadcast. Damet was, once again, forced to make last-minute changes to the lineup.

Spencer Richey suffered a back injury in training this week. Przemysław Tytoń started the match in Toronto; this was his first start since the U.S. Open Cup match at St. Louis on June 19. Another big change included Maikel van der Werff, the newly acquired center back from the Netherlands, who made his first MLS start.

Other injuries included Fanendo Adi with a calf injury and Alvas Powell with a hamstring injury. Leonardo Bertone also suffered an injury this week, and he was the only one of those injured to travel with the team. Bertone failed the matchday physical, according to the FC Cincinnati broadcast, but still made the matchday roster as an available sub against Toronto.

All of these backline changes created old challenges for the Orange and Blue.

FCC started the match in a panic, allowing Toronto to decide the momentum. The Orange and Blue had a chance in the fifth minute with Rashawn Dally making a run for it. Toronto caught up with Dally and kept the ball at its feet. Toronto had a shot on goal by Michael Bradley in the 12th minute, but it was over the bar; Tytoń did not have to try hard on that one.

Nick DeLeon was the first player to get points on the board, scoring for Toronto off of an assist by Omar Gonzalez. The score came after a deflection from its first corner kick.

FC Cincinnati needed to establish possession and quickly. Its record when conceding the first goal is now 0-14-1. Establishing possession and momentum would be key in playing to win versus playing not to lose.

Trailing by one seemed to be enough of a kick to get FCC back in the game. While the first half lacked anything exciting, it was obvious FCC needed to push forward. Creating chances means nothing if the club is unable to finish and capitalize. FCC gained momentum in the attacking third, but it still fell short. Adjustments made at halftime would need to focus on the counter-attack in hopes of getting FCC back on the board.

The second half started off with a bit more excitement than the entire first half.

Minutes in, Caleb Stanko ripped a shot outside of the box for FC Cincinnati. Toronto goalkeeper Quentin Westberg barely got his fingertips on it to send it over the top of the net. FCC received a corner kick that was initially deflected, the ball flying out to Allan Cruz. Cruz got a foot on it and took a shot, but it was blocked.

Toronto got the ball at its feet, it was off. Jozy Altidore had the space outside of the box and went for it, putting Toronto up 2-0. This is the third time Altidore has scored the game-winning goal this season for Toronto.

FCC finally got on the board eight minutes later, courtesy of Emmanuel Ledesma. Cruz made his way towards the net and was taken down in the box. Ledesma got his right foot on the deflected ball and scored, ensuring this match wouldn’t be another shutout.

This was FC Cincinnati’s first goal from the run of play since the Chicago Fire match on July 13. Adi scored in the 83rd minute that night.

The match got chippy from that point on with both FCC and Toronto picking scuffles over fouls. Kendall Waston tackled Bradley and received a yellow card, but Bradley wasn’t happy. Both sides got involved, shoving and yelling, but the official broke it up, and play resumed.

Mathieu Deplagne had a chance to level the score in the 86th minute with a beautiful strike. But the shot was just wide of the net, and the score remained at 2-1. Ledesma received a free kick in extra time, headed towards Deplagne, but Westberg came up with a big save at the endline.