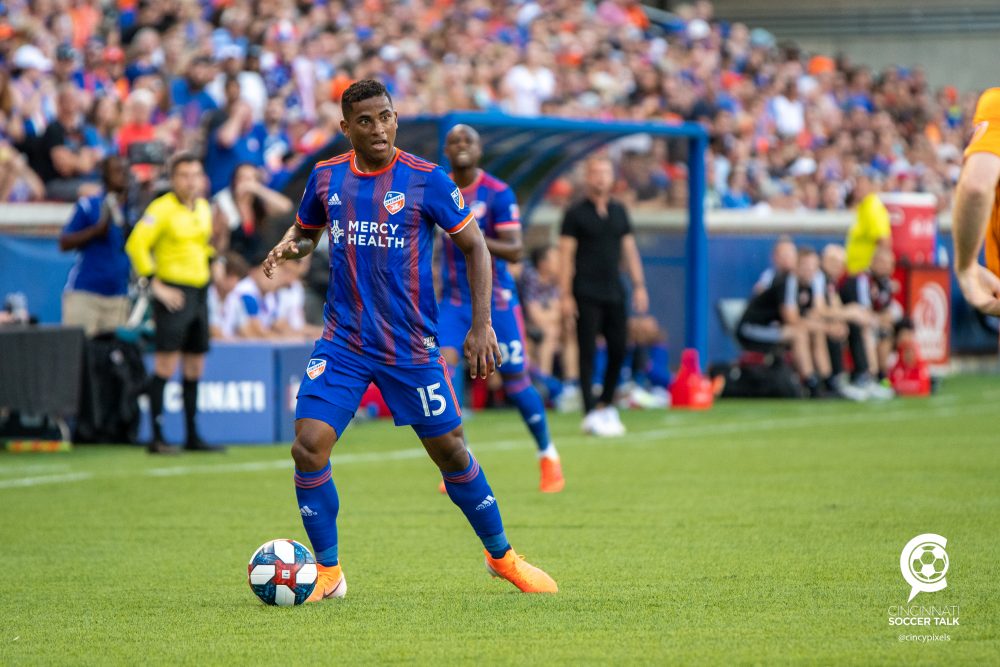 FC Cincinnati showed signs of improvement, but it wasn’t enough to match the talent of Toronto FC on Saturday. Here are our player ratings for the match.

FC Cincinnati showed signs of improvement, but it wasn’t enough to match the talent of Toronto FC as the Canadian champions prevailed 2-1 at home. Nick Deleon put the home side up with a  16th minute goal off a corner kick. Josy Altidore landed the winning strike with a long curler into the top right corner of the goal in the 50th minute. Emmanuel Ledesma got FC Cincinnati back into the match with a strike at the top of the box in the 58th minute, but it wasn’t enough to get a result on the road.

Tyton made his fourth start of the season and performed well. While he conceded two goals on three shots on target, the goals were tremendous. Not sure there was a keeper who could’ve saved Altidore’s goal, and the Deleon goal was a quick flick after a corner. I liked how Tyton came out of his box on several crosses. A player who hasn’t played much since May showed few signs of rust.

Deplagne rebounded well after leaving last week’s match early. He was solid on the back line and got forward into the attack. He nearly pulled off the equalizer in the 89th minute, but the shot went just wide of the post.

While he lacked specific moments of brilliance, the center-back brings that intensity and nastiness needed to the squad. I’m looking forward to seeing the relationship between him and Maikel van der Werff develop.

The newest addition to FC Cincinnati proved himself well. It’s still early, but you could start to see why the club brought him in with his cool, calm demeanor. He worked well with Waston and Justin Hoyte on the backline, and I’m looking forward to seeing if his presence could free up Alvas Powell to get forward with the right-back returns.

Hoyte got the start at right back with the injury this week at practice to Powell. He overran Altidore slightly on the goal, but Altidore’s strike was a thing of magic for the second goal. Hoyte was again serviceable for the match but lacks that top end speed to get into the attack.

Flat night for Ulloa. In the first half he was pushed forward to little effect. When interim coach Yoann Damet switched Allan Cruz forward and dropped Ulloa deeper in the second half, FCC seemed to pick up some traction. Ulloa isn’t a 10, so it’s hard to grade as much, but it’s fair to say that while he is a flexible midfielder, he’s better suited to the 6/8 role.

Stanko was steady and efficient in front of the back line. He made things difficult for Alejandro Pozuelo as the star midfielder was limited to 73% passing and was kept off the scoresheet.

Shifted forward in the second half and was really effective. Outside of Ledesma, he seemed to be the only other player with ideas going forward. As mentioned above, I liked his move forward as almost a second striker early in the second half. His possession of the ball led to the Ledesma goal as Cruz brought the ball down and was able to move the ball to the winger at the top of the box for the goal. I still think he’s better suited as a box to box midfielder, but with Frankie Amaya hurt, Cruz did well in his pinch-hit role.

It was nice to see Lamah back into the starting lineup but for me, he left much to be desired. I didn’t like his work rate as he was slow getting back in transition. Once again he only needs one chance to help the squad, as he set up Cruz leading to Ledesma’s goal, but he disappears too often. He completed only 15 passes on the night, which is too few for a player of his caliber and roster budget charge. He needs to assert himself more and not wait for others around him.

Ledesma was my man of the match for FC Cincinnati. He is the one player right now who seems to be playing with confidence going forward. The winger delivered some dangerous set pieces and landed FC Cincinnati’s lone goal with a great strike with his seldom-used right foot. Though I might not agree with him that FCC “deserved more”, he was a big part of the improvement shown Saturday.

Difficult night for the young forward as he was starved for service and didn’t get many chances. You have to credit him that he dropped deeper to try and get involved in the build-up play, but his 5 is more an attribute for the ability for others to get the ball to him rather than for a specific drop in his performance.

Like Dally, Mattocks didn’t get much in the way of service, but he nearly equalized on a hustle play at the end of the match. Mattocks closed down on the Toronto keeper deflecting a pass nearly back into the goal. You have to admire Mattocks’ hustle and effort. This hasn’t been the season he’s wanted, but he brings it every match.

On my first watch of the match, I was slightly low on Manneh, but he did create two chances for the Orange & Blue. Like Lamah, he wasn’t involved enough (6 of 8 passes), but he is electric when he gets the ball.

McCabe Lamah came into the match as a late sub for Stanko.