Brad Gough breaks down the goals scored in FC Cincinnati’s 2-1 loss at Toronto FC on Saturday in the latest edition of How They Happened.

FC Cincinnati stumbled to a narrow 2-1 defeat in its road match at Toronto FC on Saturday. It was a brave but inconsistent performance. Here’s a detailed look at all three goals.

FCC gave up an early goal once again, this time from a corner kick. The play began with Mathieu Deplagne getting intentionally blocked off by a Toronto player, allowing Omar González to get a free run into the box. 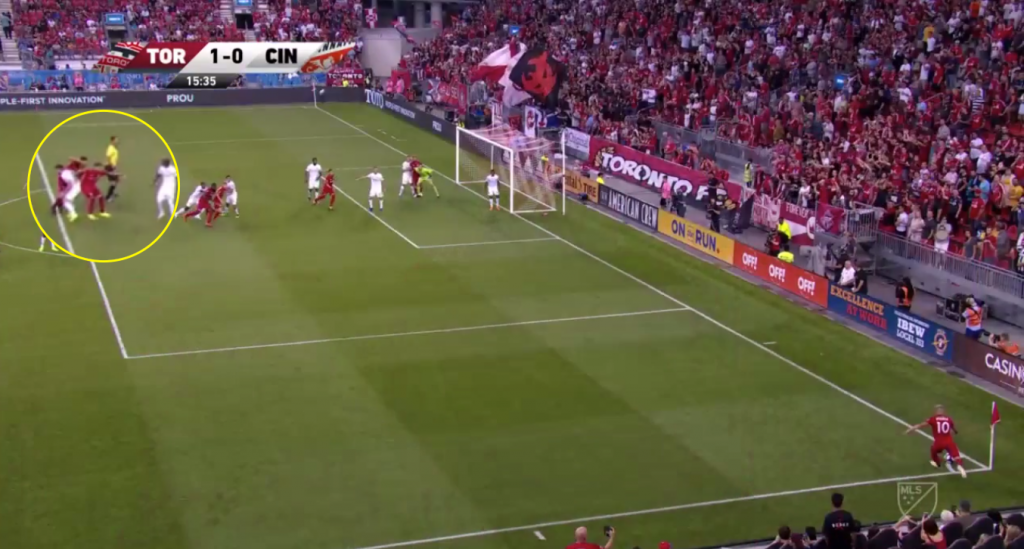 It’s tough to fault Deplagne too much, as this is an illegal play and should have been spotted by the official. However, there was no need to be marking González so tightly that far away from goal, and giving the big center back a yard or two of space would have allowed Deplagne more time to recover.

After the pick, González was goal side of Deplagne, and the Frenchman struggled to get back into position. Caleb Stanko, meanwhile, was tightly marked on eventual goal scorer Nick DeLeon (orange). Marking an opponent that is screening the goalkeeper is always tenuous. Here, Stanko allowed DeLeon to stand on his goal side. This is likely a choice dictated by goalkeeper Przemyslaw Tyton’s preference. 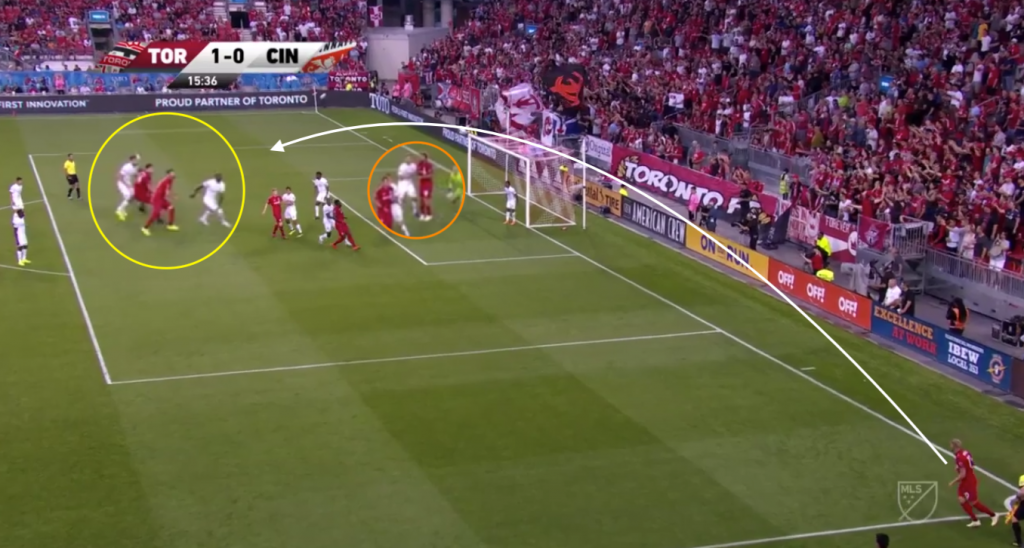 As González cut back from his run to leap and meet the cross, Deplagne was unbalanced, still trying to get goal side of his mark. Stanko allowed DeLeon to slide ball-side of him, likely creating some confusion between him and Tyton. González’s header found a slight flick by DeLeon, and the ball was beyond Tyton before he could react. 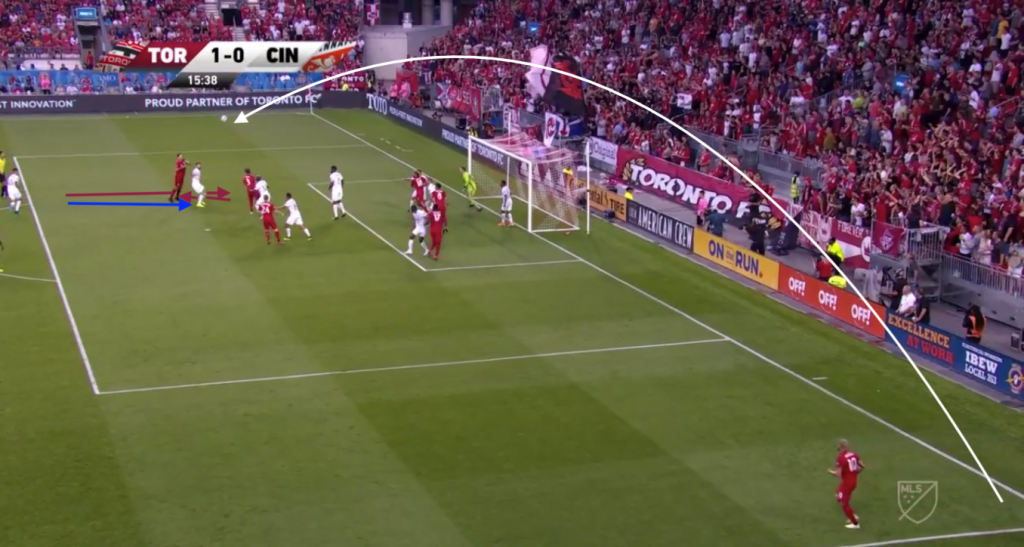 Jozy Altidore’s 50th-minute wonder strike began with a poor turnover in FCC’s offensive third of the field. Stanko attempted to fit the ball in between two defenders to Roland Lamah. Lamah waited on the pass instead of stepping to the ball, allowing TFC’s Richie Laryea to step in and easily cut out the pass. 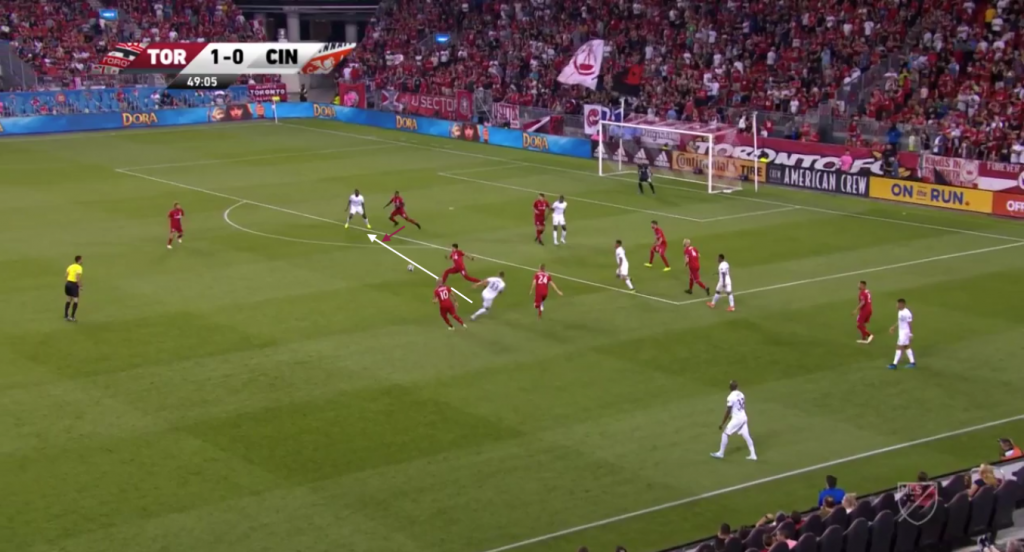 Laryea’s touch was heavy, and Deplagne was there to maintain possession for FCC. It is important to note that as Deplagne stepped to the ball, FCC had eight players in the attacking third. Deplagne should have known this and taken extra care not to misplay his touch. Instead, he elected to try to pivot away from Laryea, losing the ball and leaving TFC with a 3-v-2 break. 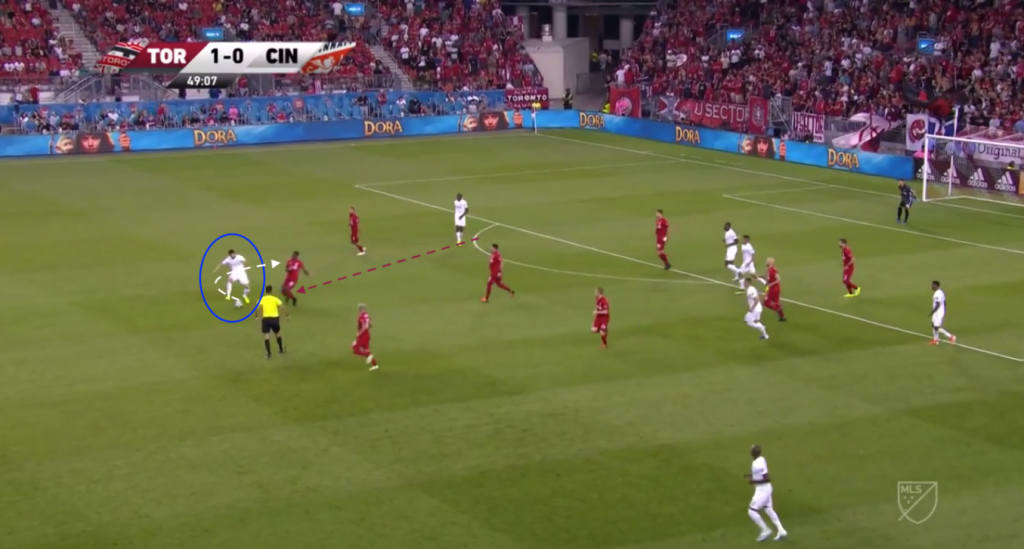 Maikel van der Werff and Kendall Waston were alone against the breaking Toronto line, with Justin Hoyte sprinting to recover. The center-back duo did well enough here, though van der Werff was a little tight to Waston (blue), and could have had better spacing (yellow) allowing him to remain a little closer to eventual goal scorer Altidore. 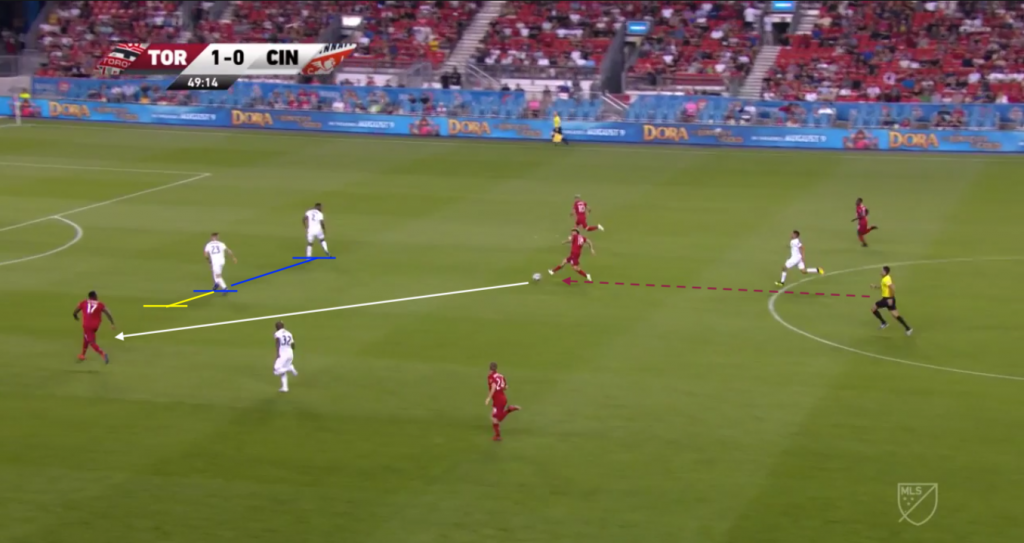 Altidore received the ball with a cutback on his first touch, leaving Hoyte in his wake. Altidore took a second touch to square himself to goal and shot with his third. Hoyte really needed to do better in not allowing Altidore to so easily cut away from him, and van der Werff — though he did well enough to stop his recovery run and pressure Altidore (blue) — should have continued to close down the striker to attempt to block the shot (yellow). 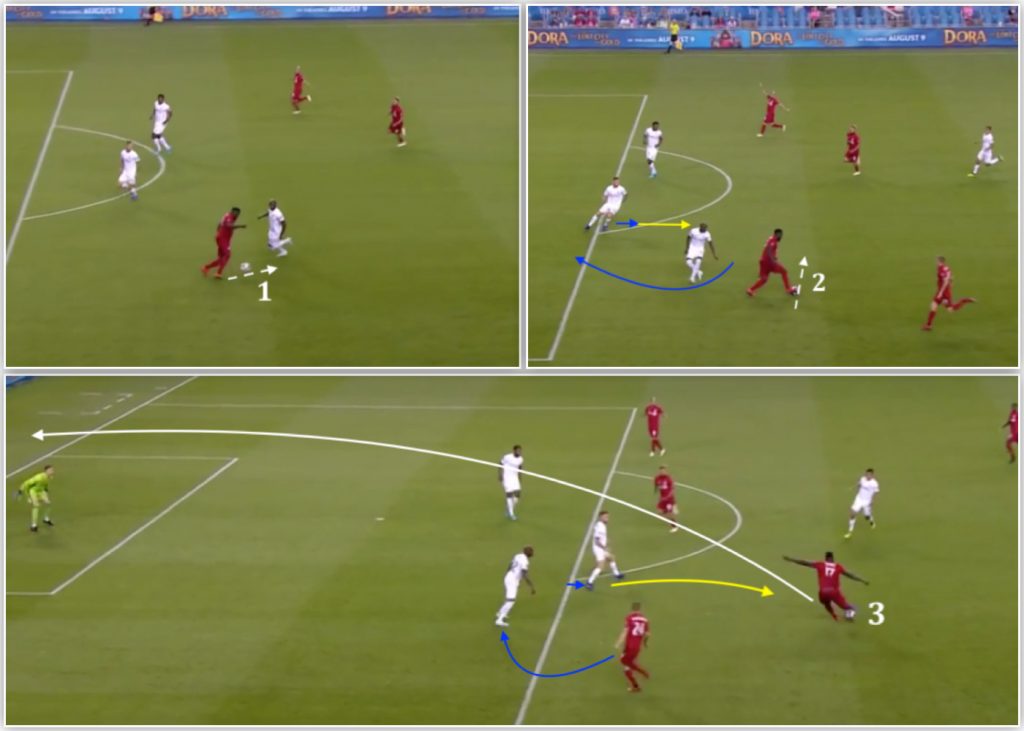 The Orange and Blue pulled a goal back in time to spend the last third of the match pressuring for the equalizer. The goal began with Allan Cruz playing between the lines, pushing beyond TFC’s holding midfielder Michael Bradley. 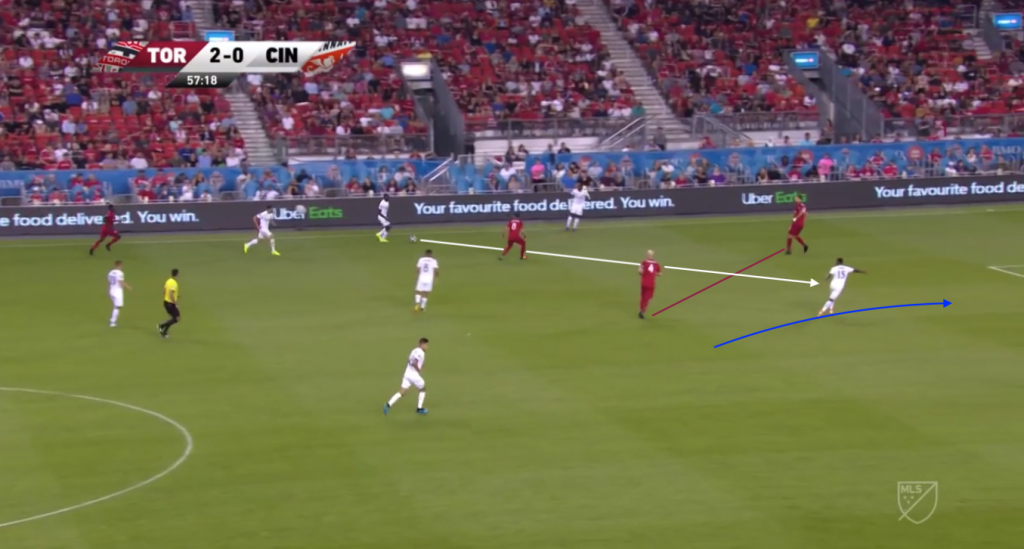 Roland Lamah found Cruz with a slotted pass, and because of Cruz’s good positioning, the TFC defense was forced to defend running toward its own goal. Cruz expertly took the pass with two quick touches to cut inside of defender Drew Moor. Emmanuel Ledesma continued his run forward to provide support. 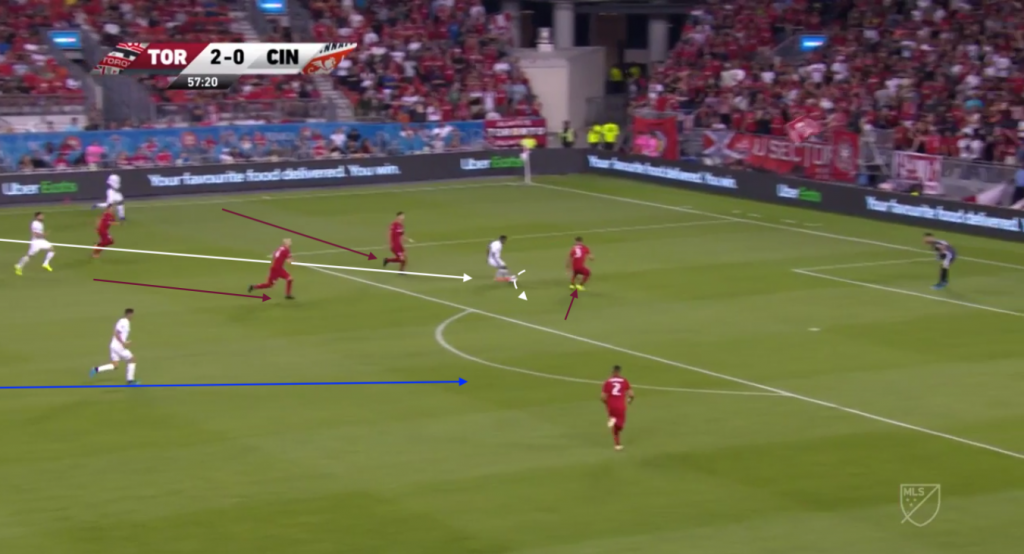 Cruz showed excellent agility to get inside of Moor, and the TFC center back almost certainly fouled the Costa Rican. The foul wasn’t needed, however, because Cruz touched the ball into Ledesma’s path just before getting clattered. 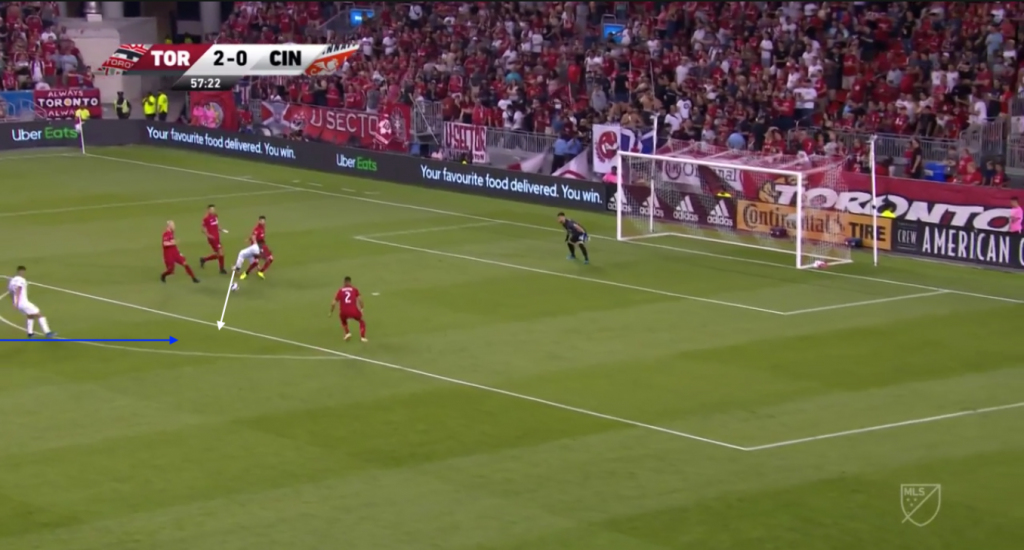 Alert to the situation, Ledesma took his strike first time with his non-preferred right foot. The quick strike found the gap between the recovering TFC defense and found the back of the net for Ledesma’s third tally of the year. 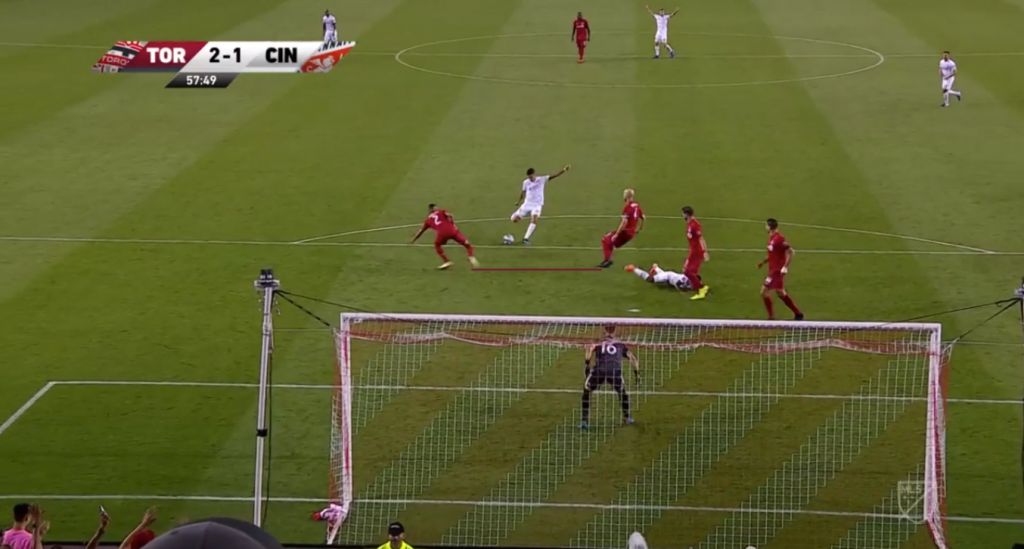 The match finished with FC Cincinnati on the losing end of a 2-1 scoreline. FCC pushed for an equalizer, creating four chances down the stretch and winning the possession battle over the final 10 minutes. However, the inconsistent performance and early goal were too much for FCC to overcome.

Look for my regular edition of Talking Tactics to come soon, where I’ll break down the positives and negatives from this match.