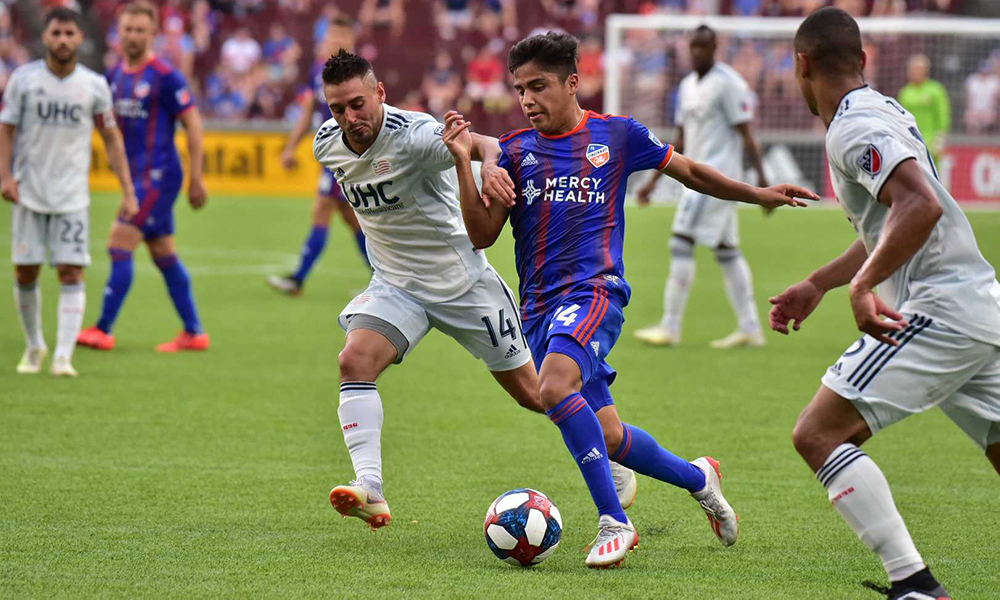 FC Cincinnati dropped its second match in four days by a score of 2-0 against the New England Revolution on Sunday. Here are our player ratings for the match.

FC Cincinnati dropped its second match in four days by a score of 2-0 against the New England Revolution. Carlos Gil put the away side up early with a ninth-minute goal. Antonio Delamea iced the match with the second goal in the 55th minute.

Tough to pick out much wrong with Richey on the night. He was once again under attack all night and made several big saves to keep the match close. There wasn’t much he could do on both goals. On both goals, he has to expect the defense to do better in front of him.

Deplagne made it 33 minutes before he had to come off with a knock to his hip.

I can’t take much issue with Waston’s performance. He had five clearances and three interceptions to lock down much of the left side of the box. He still had some issues with the chemistry between him and Nick Hagglund. At times he dropped too deep to try to cover his teammates, leaving space at the top of the box.

Hagglund had a tough job dealing with Gustavo Bou for much of the evening. Like Waston, the biggest issue is that he was dropping too deep to give space to the Revolution attack. In the lead up to the first goal, he didn’t step up to Gil to stop the attack. Leonardo Bertone passed the responsibility on to Hagglund, but the centerback dropped off instead of pressing the attacker.

The right-back for FC Cincinnati continues to make me want to pull my hair out. Two defensive breakdowns by Powell led to both goals for the Revolution. For the first goal, he let Cristian Penilla run right past him on the outside on a give and go with Gil. On the second, he stopped midway during the corner kick, leaving Delamea a wide-open header on goal. It’s so frustrating because he created two goal-scoring opportunities and was dangerous going forward. He just leaves too much to be desired on the defensive side of the ball to be trusted.

Another quiet night for Bertone in the midfield. He was also culpable in both goals. As mentioned above, he was too careless in the first goal and didn’t pursue Gil. On the second goal, he could have bodied Delamea, but he found himself on the wrong side of the center back. I do like how he can change the angle of attack with his long diagonal passes, but he can’t keep falling asleep allowing defenders to run behind him.

Stanko had three tackles and one interception on a quiet night. He completed 37 of 44 passes, but he just didn’t disrupt enough in front of the back line. I think he’s too slow to recover when he’s left as the lone CDM.

Amaya forced the toughest save of the evening for FC Cincinnati. A Powell cross found the young midfielder, but Matt Turner made a great stop. Amaya created three chances and added two shots on the evening. He has been one of Cincinnati’s bright spots but he needs his supporting cast to help.

Outside of Amaya and Richey, Cruz is the only other player I have reason to be positive about. He took five shots and at times is the only player aggressive enough to make positive plays with the ball. When he’s on the wing and FC Cincinnati can’t hold possession, his talent is wasted a bit, but it’s hard to argue about three shots on target.

Manneh was invisible for most of the evening, recording 10 passes and one shot. He completed two of seven take ons and just couldn’t get things going Sunday night.

For the love of god stay onside! He was called off four times, one of which almost voided a late goal. Adi has to know better. His movement and chemistry with teammates isn’t good enough. It’s like he has one move and doesn’t create enough space for his teammates to find him.

Hoyte came in midway through the first half after an injury to Deplagne and was just fine. He completed 25 of 27 passes and helped shuttle the ball up the left. Hoyte is what he is at this point in his career. He lacks the speed to help the attack, but he’s going to give you his all while he’s out there.

Darren Mattocks appeared as a 60th-minute sub for Bertone. It was his first appearance for the Orange & Blue since a six-minute appearance on June 1st. He wasn’t involved much, completing 3 of 4 passes. He did create an opportunity in the 80th minute, but FC Cincinnati couldn’t put it in. While a frustrating night for all, it was good to get minutes for Mattocks post-Gold Cup.

Lamah came into the match as a late sub for Manneh.