Brad Gough breaks down FC Cincinnati’s defensive lapses on Sunday that led to New England’s two goals in the latest installment of How They Happened.

Defensive woes once again plagued FC Cincinnati as it struggled to a 2-0 loss to the New England Revolution on Sunday. Here’s a detailed look at how both goals happened.

The Orange and Blue succumbed to an early goal on Sunday that put a result in doubt from the outset. Most of the back line and midfield could be held culpable for the defensive let down. 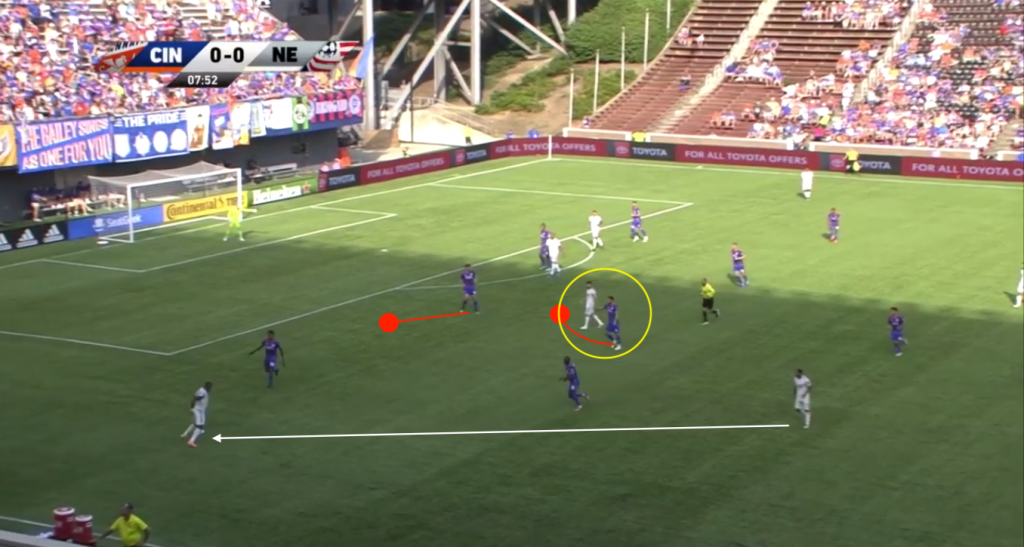 The image above shows how, as the ball was received by Revolution winger Cristian Penilla, Nick Hagglund and Leonardo Bertone were already out of position. Bertone motioned to Hagglund to pick up Gil (yellow circle). However, Bertone had no other defensive responsibilities and should have done so himself. Meanwhile, Hagglund should have been moving to provide defensive cover for Alvas Powell. 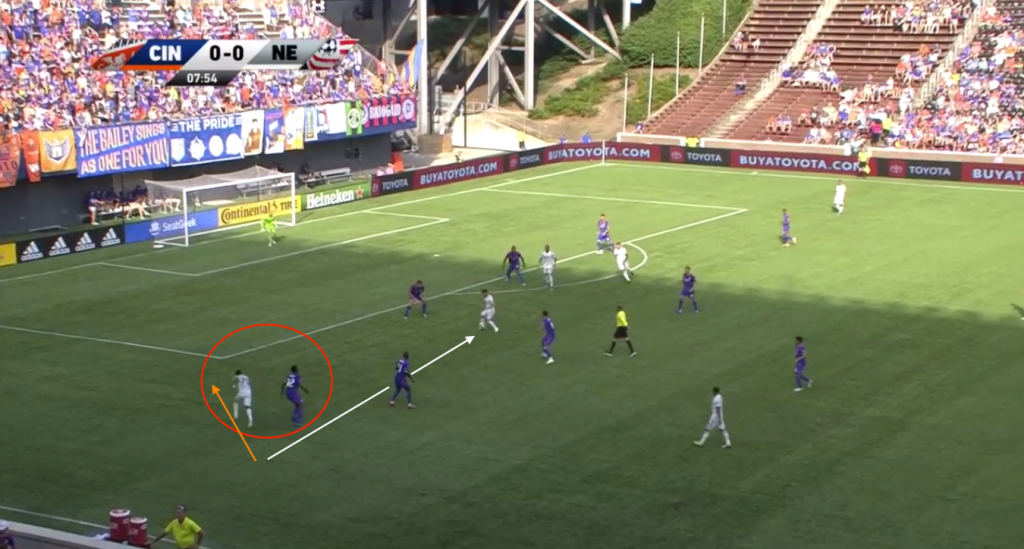 Neither Hagglund nor Bertone picked up Gil, and Penilla found the creative midfielder easily. Then, as Penilla cut in behind Powell, the FCC right back failed to track his runner allowing for the simple return pass. 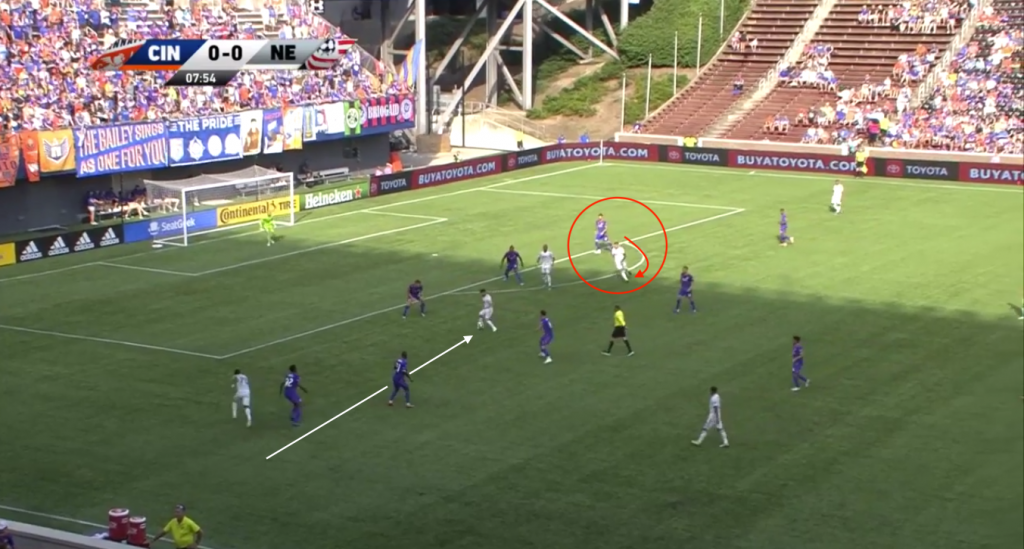 As this was happening, the backside of FCC’s defense was also setting up for failure as Gustavo Bou was beginning to make his run centrally. Here, with Kendall Waston already tied up marking Teal Bunbury, Mathieu Deplagne either needed to follow Bou’s run or make sure that Caleb Stanko picked up the Argentinian. 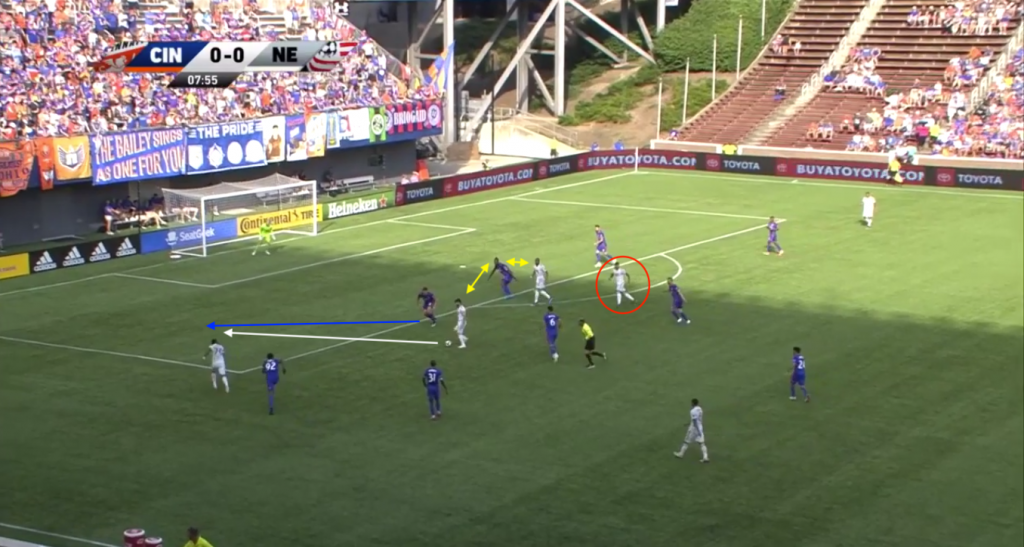 With the back line easily dissected by Penilla’s run, Hagglund moved in desperation to block the cross. This left Waston with both Gil and Bunbury to mark, and Bou (red circle) completely unaccounted for. Deplagne and Stanko both took up zones with no New England attackers in them to defend. 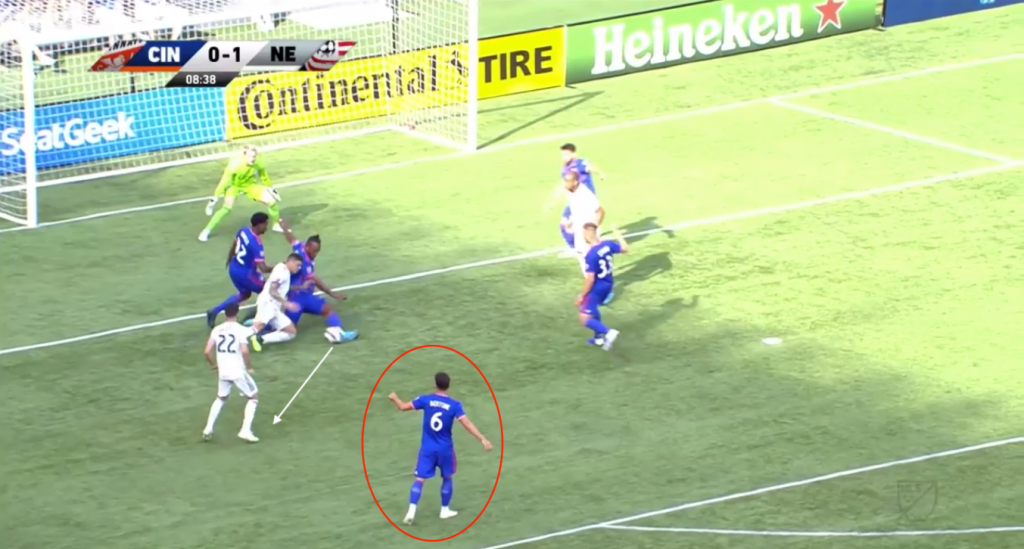 As Penilla’s cut-back found the wide-open Bou, Waston made a great tackle to dispossess him. However, as the ball fell kindly to Gil, Bertone looked on, failing to stay alert to the danger, and Gil had time to easily find the back of the net. 1-0 Revolution.

New England’s second goal came from a corner that they initially played short and was both a case of terrible marking by Powell and a lack of aggression by Bertone. 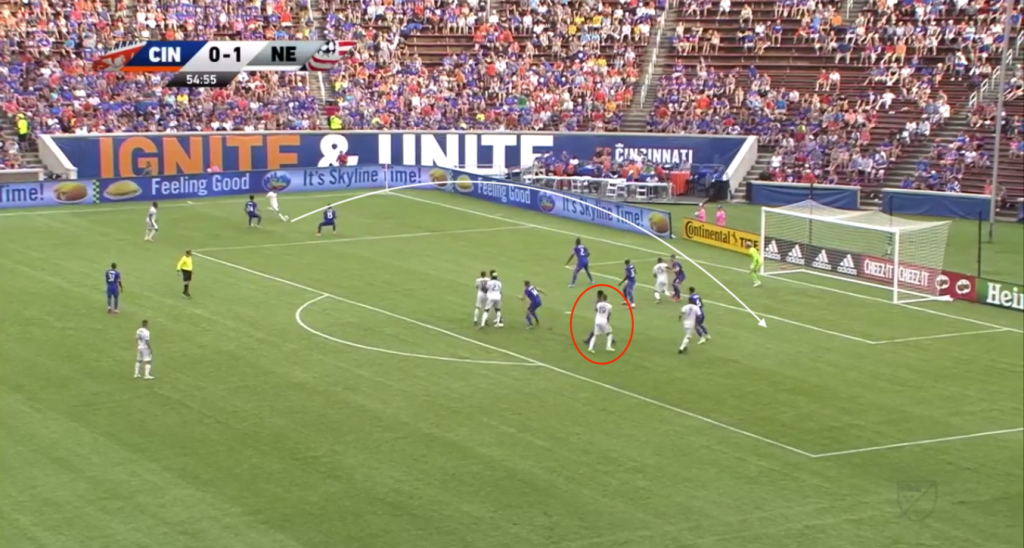 As the Revolution played the short corner, Allan Cruz correctly vacated his position on the near post to provide defensive cover and closed down Gil as he prepared to cross. Powell was locked up marking Antonio Milinar Delamea tightly (red circle). 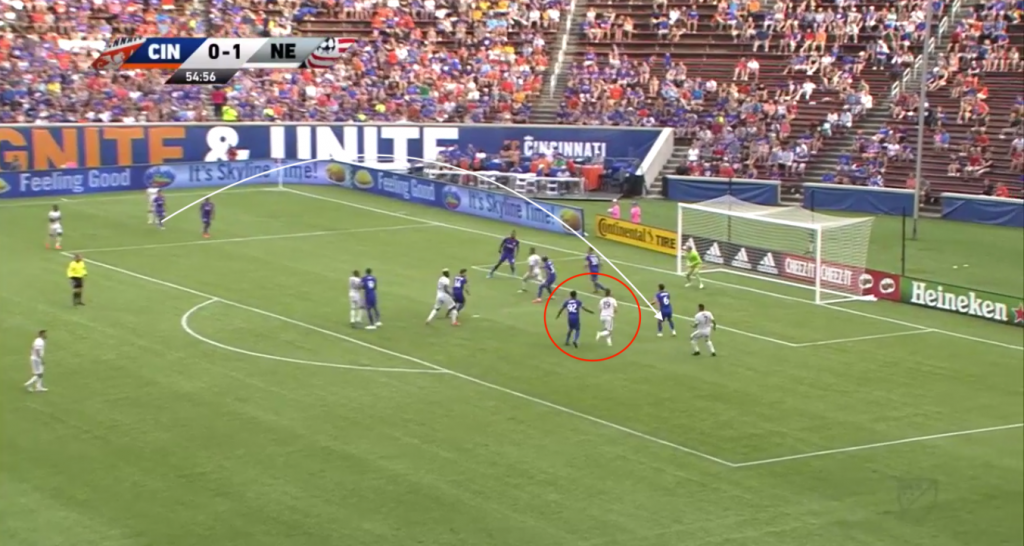 As the cross came in, Powell turned off and allowed Delamea to get goal side of him. Bertone, however, was well-positioned as the ball was struck directly at him. 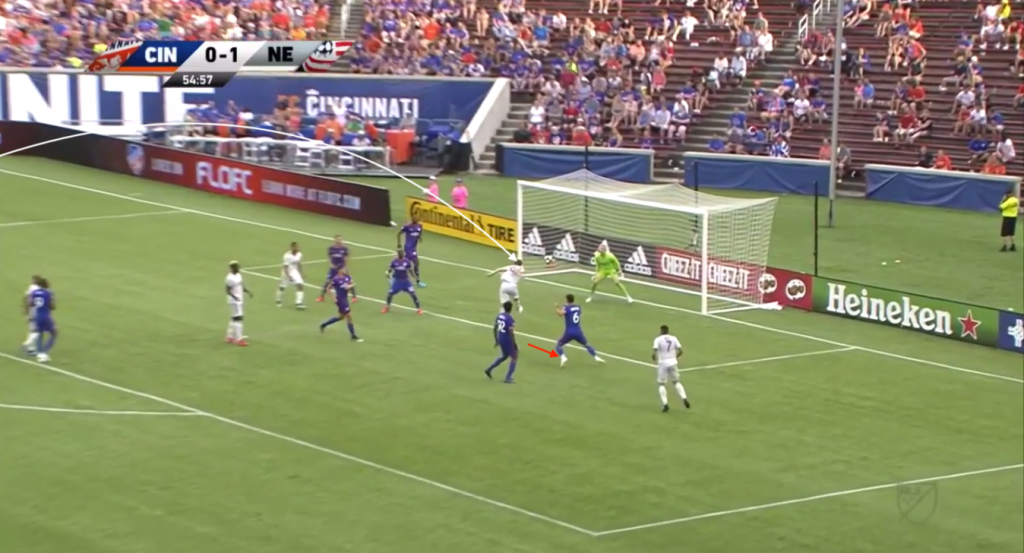 In an almost comical fashion, Bertone backed up looking to win the easy header without even having to jump as Delamea, with Powell in his dust, ran in to meet the ball completely unopposed for what will probably be the simplest goal of his career. 2-0 Revolution.

The match finished 2-0 to the Revs. FCC had a few chances down the stretch, including a great buildup that lead to a Frankie Amaya volley that Revolution Goalkeeper Matt Turner sharply parried away and an offside Adi header that forced Turner into an acrobatic tip over the bar. However, the Orange and Blue were outplayed for most of the match and ended up giving New England four golden opportunities to score, while creating no real clear-cut chances themselves.

Look for my regular edition of Talking Tactics to come soon, where I’ll break down the FC Cincinnati defensive frailties in more detail.