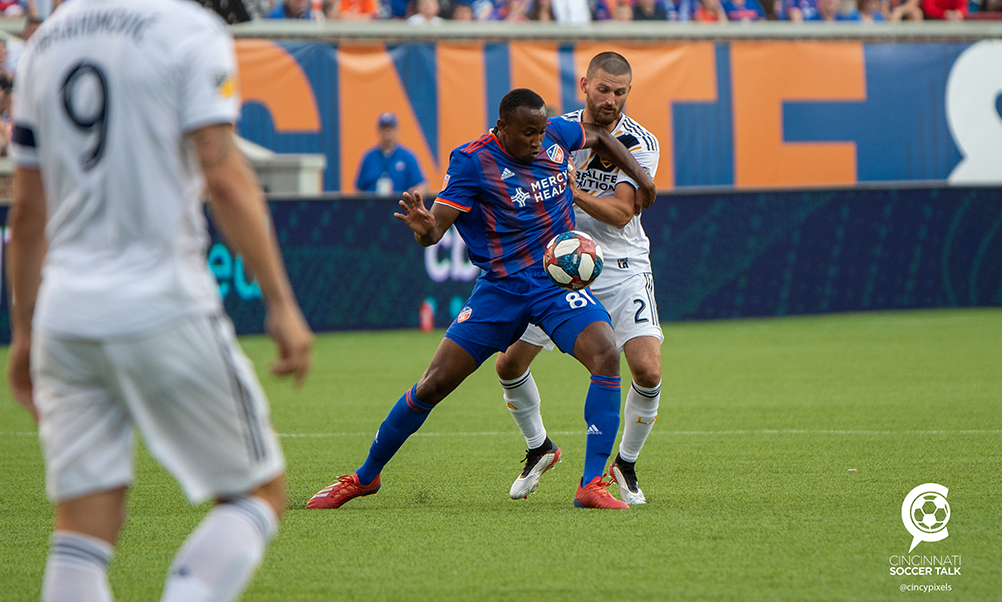 FC Cincinnati gets Allan Cruz and Kendall Waston back from the Costa Rican national team for Saturday’s home match with the Houston Dynamo.

Relief is on its way for the Orange and Blue. Like many other clubs around the league, FC Cincinnati has been decimated with player absences. Between injuries and the international break, the club has seen only 15 players dress. With the Gold Cup winding down, FC Cincinnati will receive much-needed reinforcements for its matchup against the Houston Dynamo at 7:30 p.m. on Saturday at Nippert Stadium. Costa Rican internationals Allan Cruz and Kendall Waston are now back with the team after their loss to Mexico in the Gold Cup quarterfinal.

For the first time, FC Cincinnati and the Houston Dynamo will face off. Both Houston and FCC have struggled recently. While FCC has been abysmal in its inaugural season, the Dynamo were winless in their last five MLS matches. That streak changed Wednesday when they drubbed the New York Red Bulls, 4-0.

FC Cincinnati has lost its last six league matches and will look to change that when the Dynamo come to Nippert. Humiliation was the name of the game last weekend, when FCC was throttled 7-1 at the hands of Minnesota United. The club can throw that game tape away and simply focus on Houston. Over the last few matches, Frankie Amaya has shown up as one of the few bright spots. Coming into this match, the Dynamo have the edge in every major statistical category over FCC.

Throughout this season, FCC has seemed to flash spots of brilliance and solid play but consistently producing that play has been something it has failed to do. There is a laundry list of reasons why FC Cincinnati has struggled this season, but a lot will need to happen for them to climb out the basement and garner some positive results.

Houston has been a team of multiple identities this season. At home, the Dynamo are unbeaten at BBVA Compass Stadium. On the road, the Dynamo have been able to scrounge up just one win. Breaking their five-match unbeaten streak will provide the Dynamo a chance to leapfrog some teams and keep moving up the standings.

The Houston Dynamo come into this match sitting in fifth in the Western Conference. The Dynamo roster is filled with names that MLS fans will know. Former U.S. international DaMarcus Beasley is certainly the most well-known player on the roster. The 37 year-old is slated to retire at the end of this season. AJ DeLaGarza, Alberth Ellis, Boniek Garcia, Mauro Manotas, Tomas Martinez, Tommy McNamara and Memo Rodriguez all feature in the Dynamo. Ellis and Manotas lead the Dynamo attack, each with seven goals. Couple them with Martinez and Rodriguez, and you have 22 goals between those four players. They have scored 22 of their 26 goals scored this season.

The Dynamo can certainly put the ball into the back of the net, but defensively Joe Willis has been the stable piece in between the posts. He has started all 17 matches so far this season and brings two clean sheets to the table. The Dynamo have conceded 22 goals this season for an average of 1.29 goals against. The Dynamo defense can certainly be scored on. As previously mentioned, the Dynamo have won only once this season on road, conceding 13 goals in those seven away matches.

The season is obviously over for FC Cincinnati, as it has no realistic shot at making the playoffs. However, building for the future is the mode it needs to be in. We have seen a few players make their debuts. Now is the time for FC Cincinnati to start playing the spoiler and building a foundation for the next season.

Four Keys to the Match