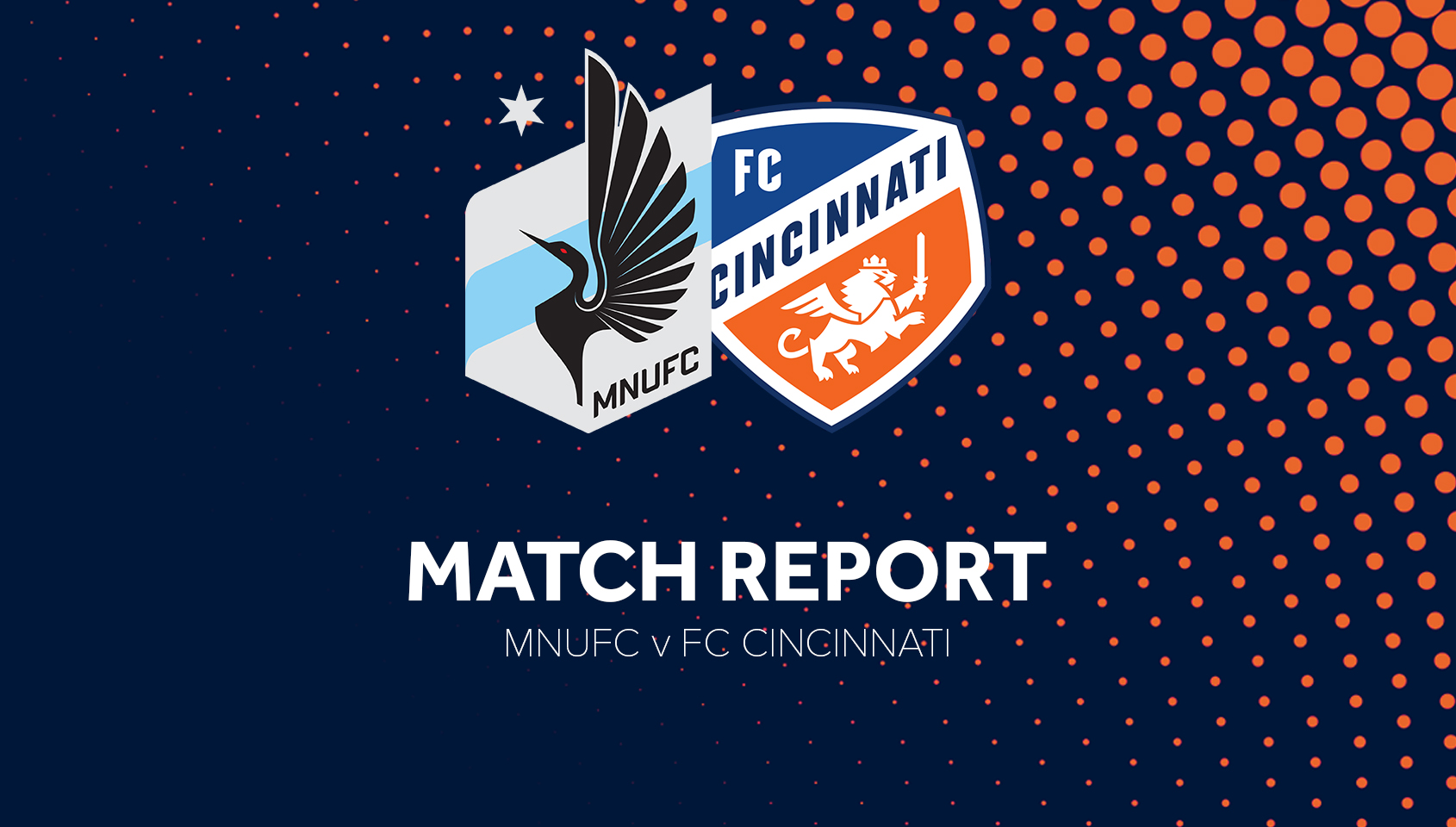 FC Cincinnati fall 7-1 to Minnesota United in their biggest loss of the season.

FC Cincinnati will take the pitch against Minnesota United in St. Paul with a depleted roster and a lot on the line.

FCC has lost 10 of their last 11 matches. The Orange and Blue are looking forward to getting at least one point against Minnesota. Even during an excessive heat warning and temperatures in the 90s, the boys in orange and blue were ready.

The match started with a strong Minnesota lead. Minnesota held possession and started out with a quick pace for about the first five minutes. In the sixth minute, a foul was called on Minnesota, giving FCC a free kick. While the free kick did not result in a goal, it gave FCC the chance to build up their momentum.

The next ten minutes flew by in a flurry of passes and chances for the Orange and Blue. They came out on the attack, which is a refreshing change from some of the play that supporters have seen lately. FCC held possession, and Frankie Amaya took a shot from outside the box, but it went over the post.

In another run of possession, Kekuta Manneh got the ball to Rashawn Dally’s feet. Dally took a beautiful shot that was just barely deflected by Minnesota’s keeper, Vito Mannone.

But a lot changed in just five minutes. Minnesota received a free kick that resulted in a goal from Ike Opara. It was a bad defense from Justin Hoyte, who wasn’t where he needed to be. Bad defense has been a point of contention for FCC as of late. And in the 23’, Minnesota scored again, courtesy of Hassani Dotson.

The Orange and Blue started to struggle even more after that second goal in five minutes. The possession run that FCC had earlier in the match did not seem to be something that could be repeated. Minnesota was able to take advantage of Emmanuel Ledesma and Manneh on the wings. The pair are formidable attackers, but they lack defensive skills, and that has made it easy for Minnesota to run past them to create scoring opportunities.

Minnesota clearly grew confident after three goals in less than 15 minutes. They continued with their attack and keeping FCC’s defense on their toes. Minnesota kept possession and kept the run of play going. They were able to seal their fate with a fourth goal in the 43’, ending the first half with a 4-0 lead.

FCC started off the second half with one substitution. Tommy McCabe would get his first MLS appearance, replacing Eric Alexander. Manneh had a shot on goal, blocked by Minnesota’s keeper, resulting in a corner kick for FCC. Amaya took the kick, sending it just a little far, resulting in nothing – which seems to be a common theme for the Orange and Blue.

Minnesota took advantage to reset during the half, coming out strong and looking for more chances. The fact that they had a four-point lead coming in did not stall their momentum or desire to keep scoring. Minnesota was comfortable keeping possession and attacking, but mostly they were keeping the ball away from FC Cincinnati.

That didn’t last long. In the 56’, Ledesma got his foot on the ball, taking a shot. It was sloppy, which is uncharacteristic for anything coming from Ledesma, but the ball hit the back of the net. This was Ledesma’s first MLS goal, and it lit a spark for the Orange and Blue.

Interim head coach Yoann Damet made his second substitution of the night. Forrest Lasso entered the match, replacing Mathieu Deplagne. Deplagne has played every minute of every match this season, including FCC’s run in the USOC, meaning this is the first time Deplagne has been subbed out. Lasso took his place at center back; Hoyte moved to left back after the substitution was made.

Minnesota subbed in Kevin Molino and Mason Toye for Angelo Rodriguez and Darwin Quintero in the 61’. FCC has been able to create more chances in the second half, looking more confident on the pitch as the match goes on.

Minnesota had a great run of play, hoping for a goal, but Nick Hagglund kicked it away right in front of the goal. A corner kick was given to Minnesota, but Amaya stopped the ball before there was any result. But Minnesota stayed on the attack, and Osvaldo Alonso took a shot. Forrest Lasso was there to block it, keeping the score line at 4-1.

Alonso was subbed right after, with Lawrence Olum coming in for him. Within seconds of this substitution, Opara increased the goal difference again with a brace. This is the second time this season that FC Cincinnati has trailed by four goals in one match. The other time was earlier in June against NYCFC. Hoyte got booked with a yellow card minutes later for a tackle from behind, and it was clear that frustration was mounting for the Orange and Blue.

Fifteen minutes after being subbed in, Mason Toye scored the first goal of his MLS career. Lasso was there with an attempt to block, but the ball flew right by him and Spencer Richey. This resulted in the biggest score deficit that FC Cincinnati had suffered from all season at 6-1.

A hydration break at the 76’ gave the Orange and Blue a chance to recoup and get a game plan together for the last 15 minutes of the match. Ethan Finlay was booked with a yellow for a tackle from behind on Amaya, reminiscent of the yellow Hoyte got moments earlier.

Jan Gregus fouled Ledesma outside of the box, resulting in a free kick in the 86’. Ledesma took it but was unable to create a result. The ball was headed away by a Minnesota defender. Minnesota got the ball back, running down the pitch, and Kevin Molino increased the score line again. Molino’s goal gave Minnesota a 7-1 lead with less than five minutes left in the match.

Prior to this match, Minnesota had only scored six goals at home in the last six matches.

With only two minutes of extra time, Minnesota was not slowing down, and FCC was not ready to give up. FCC defenders Lasso and Hagglund stepped up, deflecting two shots that could have expanded the goal deficit even more.

When the final whistle blew, the score was 7-1. This was the largest amount of goals scored in Minnesota history. Subsequently, it was also the most goals allowed by FC Cincinnati in team history.

There are a lot of moving pieces behind the scenes – everyone knows that.

While FCC does not have a terrible defense, there is a cohesion that is lacking. Whether that is contributed to player chemistry or coaching changes, it is one of their biggest faults this season. Another struggle has been being able to score. The talent is there, but the confidence is not. And having confidence on the pitch can make all of the difference.

It’s easy to look at the score and blame the keeper. But Spencer Richey has proven time and time again that he is a valuable piece of the puzzle. There is only so much the keeper can do when the defense in front of him is lacking.

Arguably, FCC’s biggest challenge right now is not defense or offense – it is the lack of player availability. It is difficult to say definitively that this team would be in a different spot in the league if players had remained healthy and available. But it is a possibility.

Overcoming this adversity is going to be FC Cincinnati’s biggest challenge throughout the remainder of the season.

It’s clear that we have the potential to be better – but how long are supporters going to hold onto that potential without seeing results?

Catch the Orange and Blue in action back at Nippert Stadium next week. FCC take on the Houston Dynamo on July 6th at 7:30.