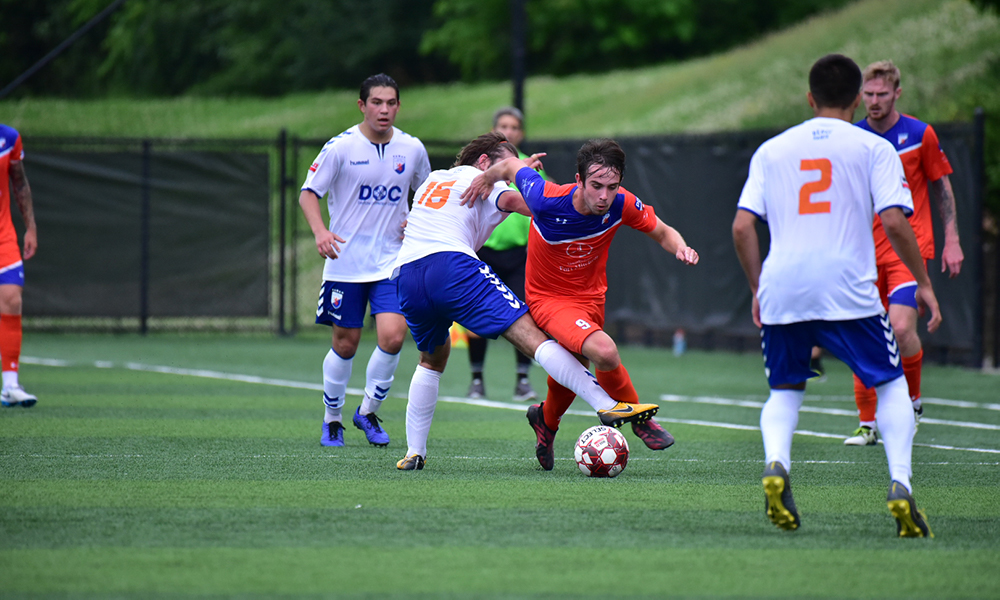 Despite a 2-0 road loss to Dayton on Friday, the Cincinnati Dutch Lions are still in the playoff hunt and take on the Flint City Bucks on Sunday at the NKU Soccer Complex.

The easiest way to sum up the 90 minutes plus of soccer played at DOC Stadium in West Carrollton on Friday is Dayton just wanted that game more. It was an uninspiring performance on the pitch by the Cincinnati Dutch Lions FC squad in a 2-0 loss to Dayton.

What looked to be a midfield that was overloaded turned out to be a team of nine men chasing the ball for the majority of the match. Dayton dominated every aspect of the first half, and Cincinnati was lucky to head into halftime 0-0. The one bright spot in the first half was Cincinnati goalkeeper Kegan McGlaghlin’s fingertip save over the bar on a Dayton corner kick. (Video can be seen here:  https://twitter.com/touchedartist/status/1144747439431278597?s=21.)

Second Half Dominance by Dayton

Dayton scored in the first minute of the second half, as Cincinnati came out of the locker room flat and appeared unready to start the second half despite having the ball to kick off.

Dayton’s Adjei raced down the left side of the pitch and slotted a brace home in the bottom right corner just out of the reach of a diving McGlaghlin. The Cincinnati keeper just couldn’t get there, and Dayton found themselves with a chance to play spoiler tonight.

Dayton appeared to be more interested than Cincinnati in getting to the 50/50 balls as well as the second ball out of the air. Dayton continued to dominate possession and Cincinnati coach Paul Nicholson made a number of substitutions trying to change the pace of the game. The Cincinnati faithful in attendance were excited to see Jorge Guinovart enter the match, but he was called for a dangerous play inside the 18 yard-box within seconds of entering, and Dayton was awarded a penalty.

Dayton sent Bulgar to the spot to take the penalty kick on McGlaghlin. He calmly put the ball in the left corner to give Dayton a 2-0 lead, and they never looked back.

Dayton goalkeeper Moussa Sy caught one ball the entire match, and that was at the closing moments of the match. Cincinnati had a number of missed opportunities by simply not following its shots and watching the ball get to the keeper. Their inability to “crash the net” and try to clean up the rebounds could have very well cost Cincinnati the match.

The good news for Cincinnati is that it doesn’t have long to wait to move beyond the match in Dayton. The Flint City Bucks come into NKU Soccer Complex for a match Sunday night. After losing on Friday, the Bucks match is a must win for CDLFC. A win against the Bucks would put CDLFC even with them in the season series. The other good news is that Cincinnati is still very much alive in the playoff hunt.