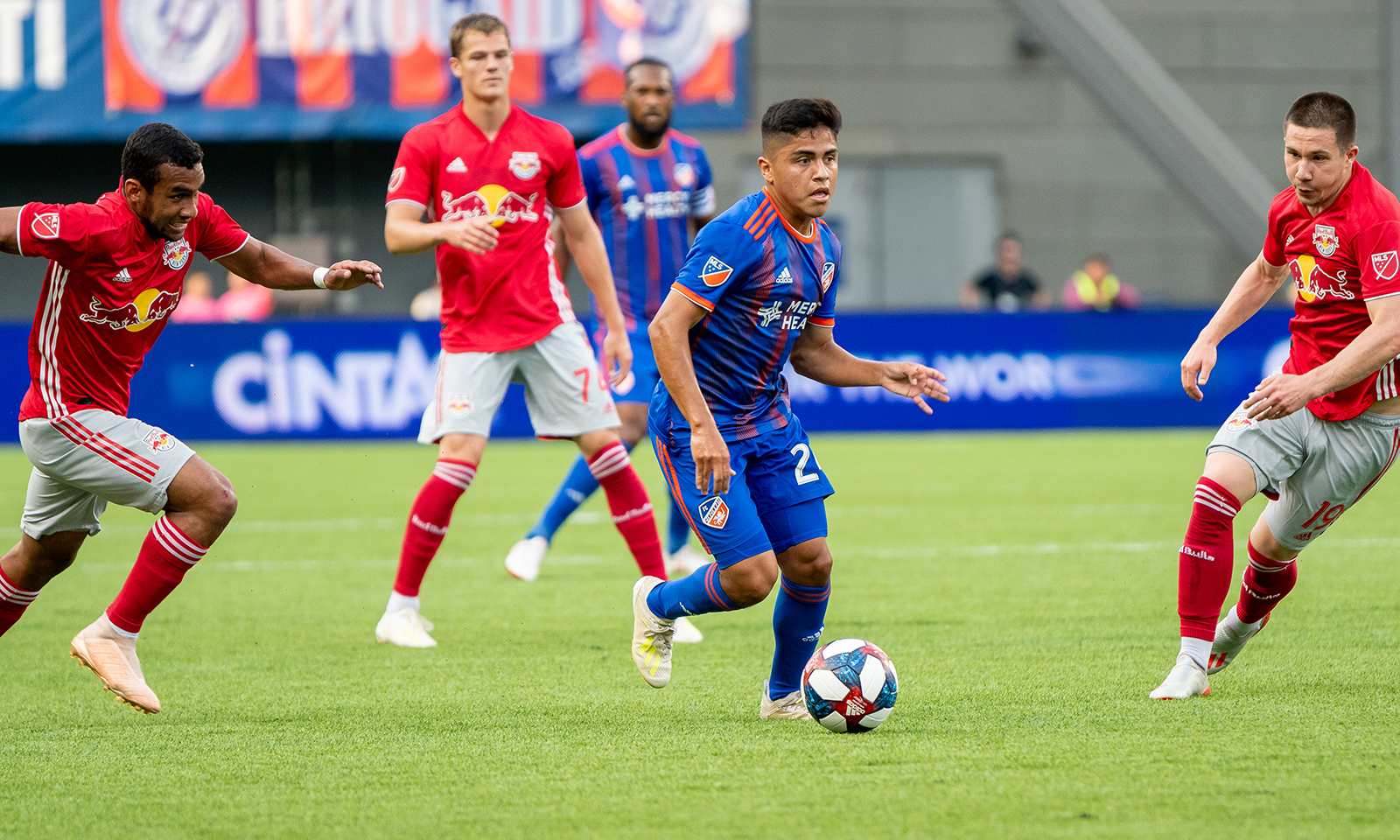 Talking Tactics: Why Amaya is the answer for FC Cincinnati

With his movement to stretch the field, Frankie Amaya can unlocking the striker position for FC Cincinnati, says our tactics guru Brad Gough.

Let me get this out right away: I think Frankie Amaya is the answer to FC Cincinnati’s striker woes.

Does this mean that the young rookie should start up top for the orange and blue? Absolutely not. In fact, I don’t think he should play striker at all. So, how can he fix FCC’s striker problems without playing the position? Well, I’m glad you asked.

One thing that nobody has been able to fault since his first appearance is Amaya’s effort. His motor goes non-stop. Defensively, this manifests itself in constant pressure throughout the midfield, deflected passes, and picked pockets. But his effort translates to the offense as well. Watch any clip of FCC in possession and you will see the midfielder constantly in motion, checking in and out of space. He plays centrally but recently has been popping up in wide positions when it’s needed as well. Just look at how spread out his passing chart was against the LA Galaxy on Saturday. 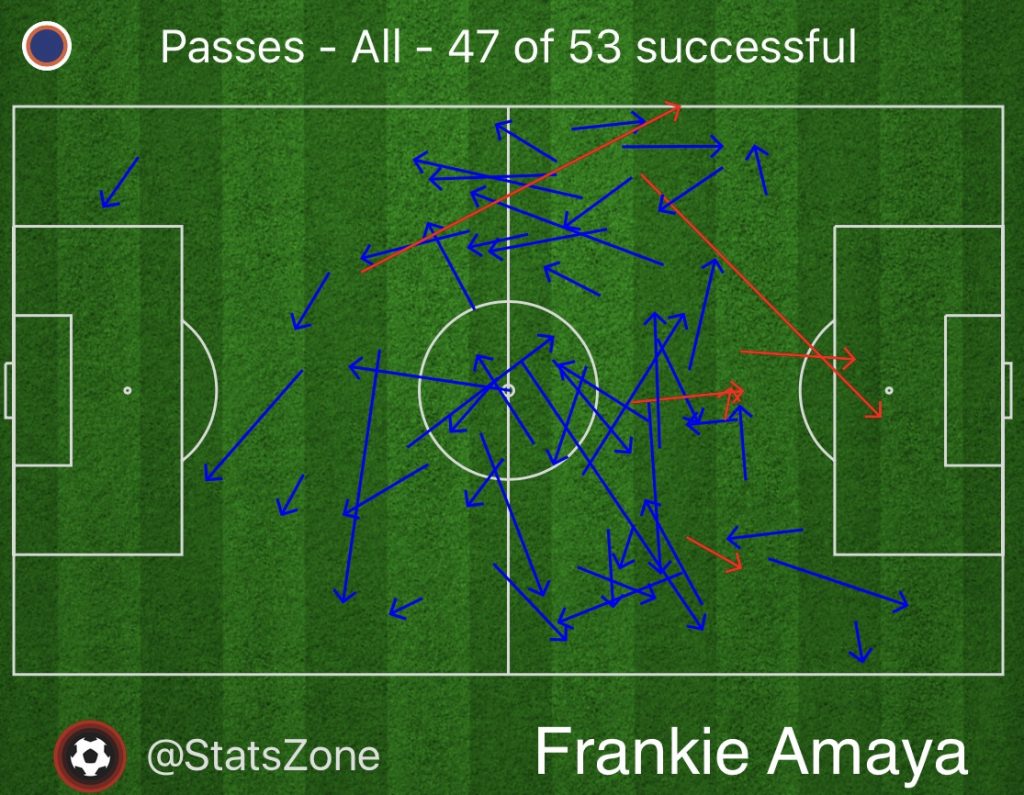 Not only did he complete an impressive 88.7% of his passes, he did so in all areas of the field. Amaya’s work rate makes the field bigger for FC Cincinnati.

The inherent weakness of playing a formation with a single striker (as FCC has every match this year) is that the lone forward is constantly double teamed by two center backs. Furthermore, the opposing defensive midfielder can often screen your striker by positioning himself in the passing lane. Teams playing with a lone striker have two options: Use a highly mobile striker that can run off the shoulders of the center backs, attempting to confuse them as they pass responsibility for marking him back and forth. Or have a creative and mobile attacking midfielder that can push into the opponent’s back line and force the center backs to deal with him as well.

This is where Amaya comes in. When he plays, his high motor and creative movement forces opponents to account for him. We saw this over and over in the LA Galaxy match. Amaya would get forward and either pull Perry Kitchen (the Galaxy holding midfielder) out of position or force Diego Polenta and Daniel Steres (the Galaxy center backs) to mark him. Or as in Rashawn Dally’s 71st minute chance, sometimes both. 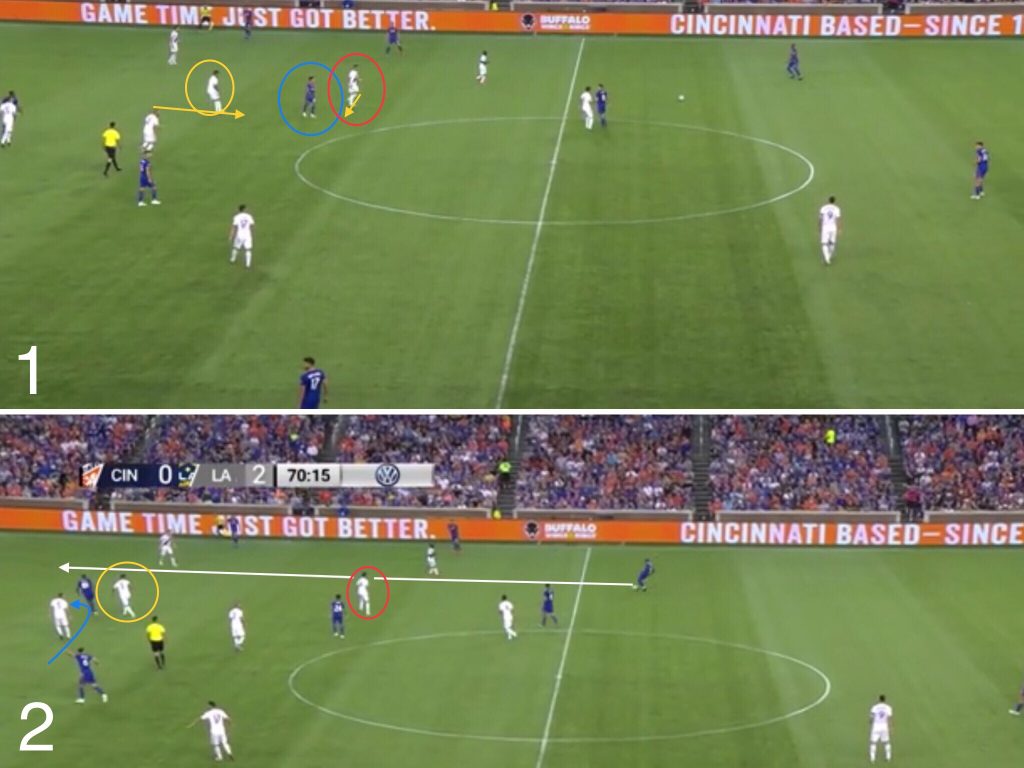 Just before the chance pictured above, Amaya pushed into the area occupied by Polenta (yellow). Then, when he saw Leonardo Bertone move the ball back to Justin Hoyte, he checked back into the gap between the Galaxy back line and midfield. As he did this, Polenta stepped into the midfield to maintain pressure on him, while Kitchen (red) shifted in an attempt to limit any passing lane that he might occupy. Hoyte and Dally recognized the new window created by Amaya’s movement and executed a great curling run and through ball that created an opportunity and one of FCC’s few shots on goal.

Another example of Amaya creating these kinds of opportunities without ever touching the ball occurred in the 82nd minute. 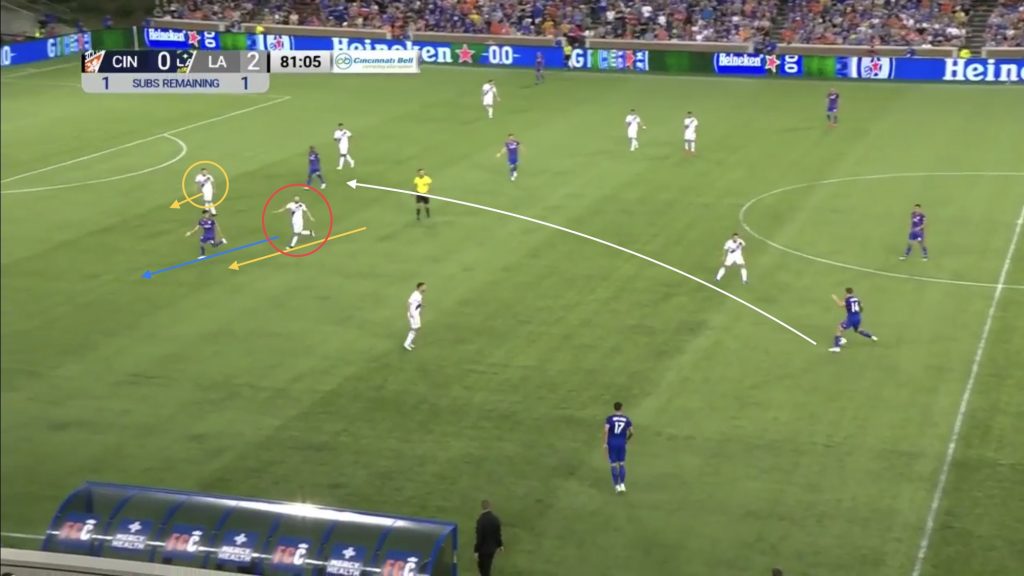 This time, Amaya worked off of Kitchen (red) by running in behind him. Kitchen obliged by moving out of the passing lane between Nick Hagglund and Kekuta Manneh. The directness of his run also caused Steres (yellow) to step in anticipation of Hagglund playing Amaya into the corner. With the passing lane wide open, Hagglund played the ball to Manneh, who squandered his gilt-edged chance.

So Why Not Just Let Amaya Run?

With a free midfielder like Amaya running all around the pitch creating nightmares for the opposition, the temptation exists for the defense to remain tight in their zones and not follow him around the field. However, because Amaya is so direct and decisive with his movements, he creates numbers up situations in quick succession all over the field.

*I wrote about dividing the field into numbers up situations in my last article HERE. This makes more sense once you understand that concept. 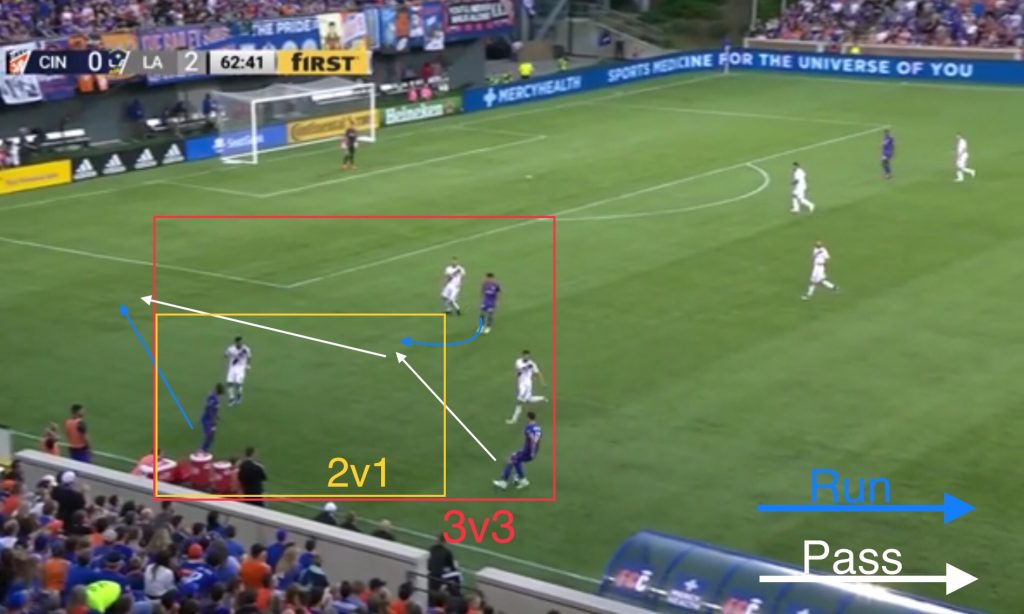 In the image above, Mathieu Deplagne carried the ball forward into a 2v2 situation. As Amaya checked to the ball, Kitchen stayed in his zone and left Steres in charge of the rookie, creating a 3v3. However, a quick darting run in front of Steres presented Deplagne with the opportunity to play the ball to Amaya and attack the wide channel with Manneh, 2v1 against the Galaxy right back. Manneh got goal side and was able to drive into the box.

Just watching him play shows us that Amaya is making a big impact on the team. The match against the LA Galaxy was his most influential to date with three shots and 47 passes completed. Compare this to his starts against Colorado (two shots and 20 passes), and New York Red Bulls (one shot and 21 passes), and the stats bare that out.

But Amaya’s impact on those around him has been just as profound. Fanendo Adi received 30 passes and had six chances on goal playing with Amaya against the Red Bulls and received 27 passes and had one chance against Colorado. In the start in between, a 5-2 loss at New York City FC in which Amaya didn’t start, Adi received only 18 passes. Dally received the ball 24 times in only 70-odd minutes played against the Galaxy.

FC Cincinnati’s lack of scoring opportunities has been well documented. So what’s changed that will allow Amaya’s movement to create more scoring chances? I think the Galaxy match showed a real shift in tactics for FCC – allowing Amaya to play a free role in which he has a license to check anywhere on the field when the team has possession. In a one-game sample size, Amaya did this extremely well. And with very little to get excited about for FCC fans lately, I’m holding out hope that Amaya blossoming before our eyes can be a much needed bright spot.

Talking Tactics: Why Amaya is the answer for FC Cincinnati