Coach Gough calls for better passing in the final third after 18 failed crosses despite winning the possession battle.

It was less a tale of two minutes for FC Cincinnati as they conspired to give up 2 goals in quick succession in losing to the LA Galaxy 2-0 on Saturday. The story was all too familiar. The first goal came when a Galaxy forward dribbled into the box and Justin Hoyte couldn’t quite get close enough to prevent a shot. The second came moments later as Nick Hagglund and Mathieu Deplagne collided both attempting to win a defensive header.

Breaking down these goals would be mundane and of little use. Therefore, I’m going to explore a few key moments and pieces of data that get at part of the systemic problem with FCC’s attack.

FCC struggles mightily in the final third. In this match, FC Cincy was able to complete 478 passes and control the ball for 64.5% of the time. However, they created only 3 shots on goal. A quick glance at the shot chart shows that of the 12 shots that the orange and blue mustered, 8 were from outside of the box. Contrast this with the LA Galaxy shot chart, where only 2 of their 13 shots came from this range. While shooting from distance isn’t inherently a negative thing, the high percentage (67%) shows that FCC is playing with little patience in their attacking third. 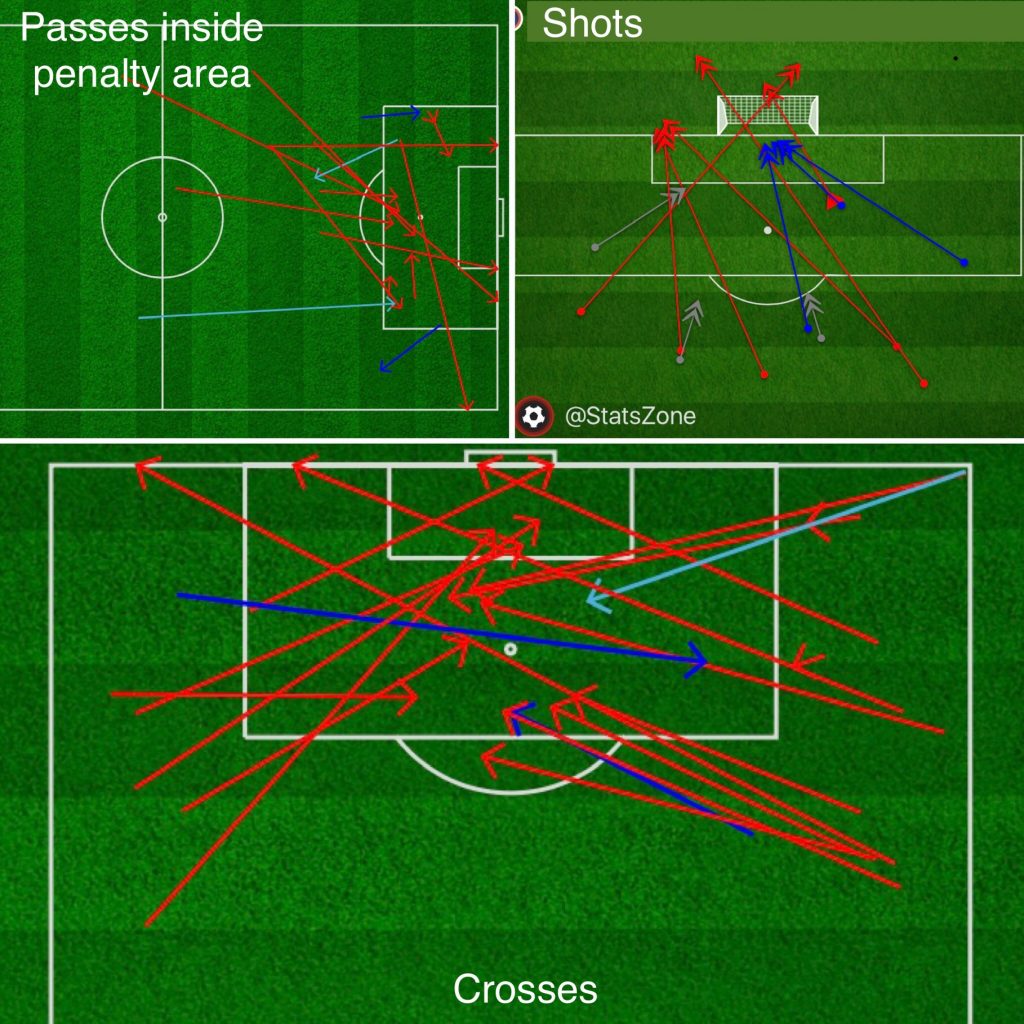 When a long-range shot isn’t the chosen option, FCC struggles to complete meaningful passes. Against the Galaxy they only attempted 17 passes into the penalty box, completing only 4. Instead, the FCC attacking players settled for crossing the ball 21 times, with only 3 of these finding their target. Again, contrasting this with the Galaxy numbers (10 of 25 passes into the box, 3 of 11 crosses) paints the picture of a team deserting their possession-based approach to the game any time they are near the opponent’s goal. 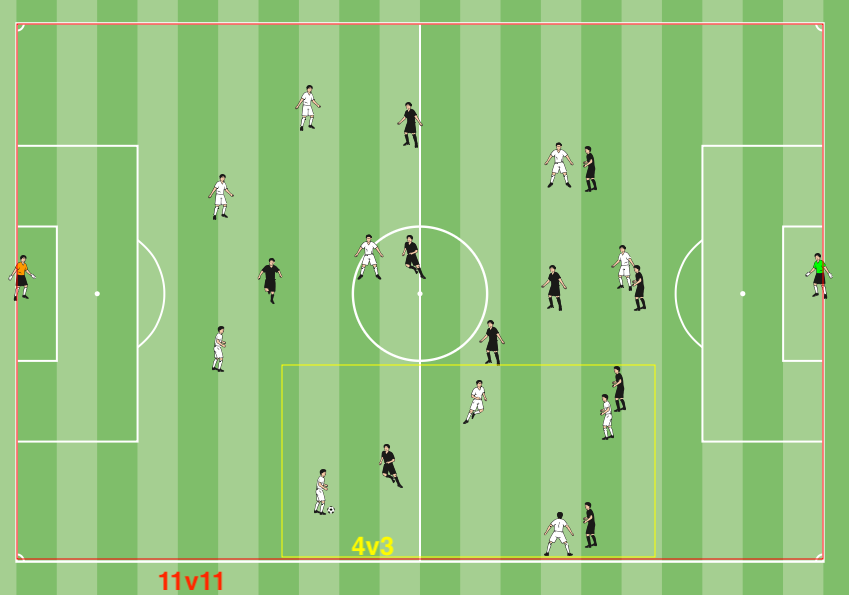 Though it’s not foolproof that the option is always to play in these smaller zones, often times doing so instead of trying to force the ball into more difficult areas pays off in both possession and penetration. Take, for example, Leonardo Bertone’s attempted switch of play in the 44thminute. 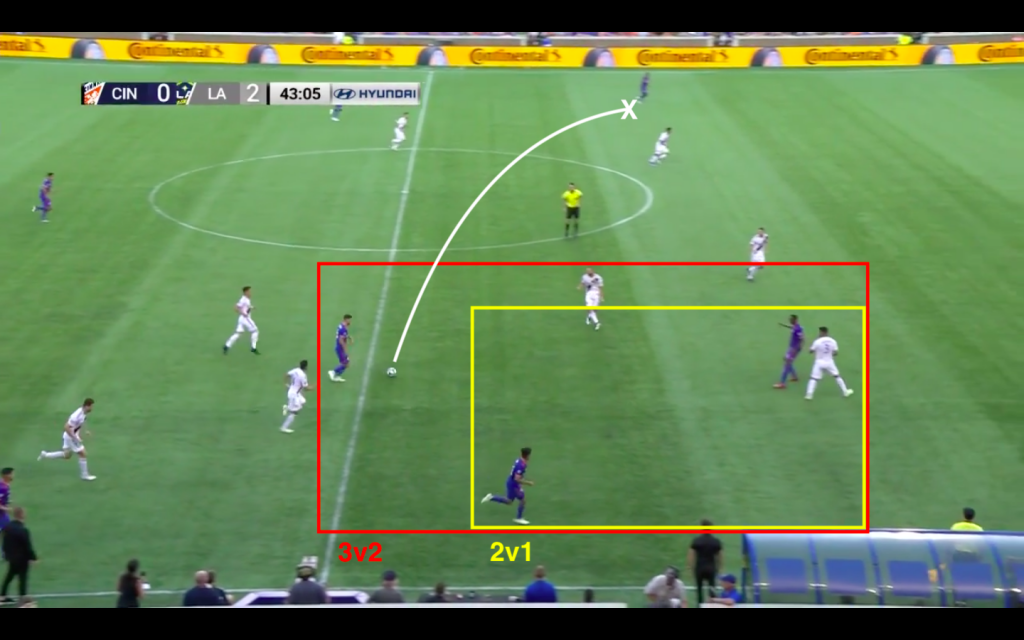 Had this pass been completed it certainly could have led to a chance for Kekutah Manneh. However, had Bertone elected to attack the space around him he had the chance to play 3v2 with Frankie Amaya and Rashawn Dally. Furthermore, had he quickly played the ball to Amaya on the flank, Frankie would have had the opportunity to play 2v1 and perhaps penetrate the Galaxy back line with a simple give and go.

Using the Space You Have

In the 57th minute, Frankie Amaya used creative movement and simplified play to create numbers up situations in quick succession. 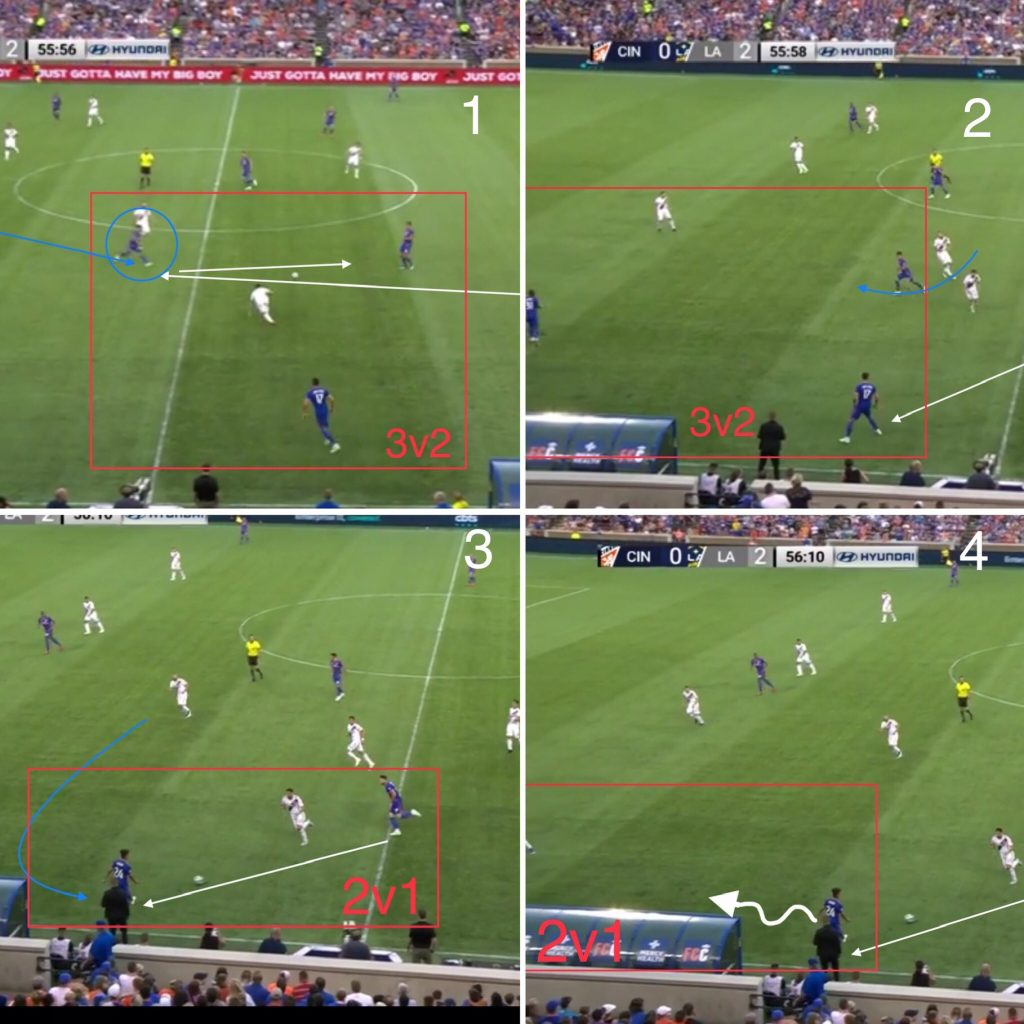 First, Amaya checked back to the ball inside of his marking defender to create a 3v2 with Bertone and Deplagne (1). After laying the ball off to Bertone, he cut beyond his defender as Deplagne received a pass creating a new 3v2, this time bringing Manneh into the mix (2). Deplagne chose to ignore the numbers and carry the ball back into the center, but Amaya continued his run taking a position on the flank and giving Deplagne a 2v1 opportunity (3). Deplagne recognized this and gave Amaya the ball, and Frankie immediately attacked the space in front of him creating a 2v1 opportunity with Manneh. Manneh drew a cynical foul and FCC nearly scored through the dangerous set piece that followed.

This was not a poor showing from FC Cincinnati. They played a talented Galaxy team, completely stifled Zlatan Ibrahimovic, and had a ton of the ball. For the first 15 minutes, the game was largely even. However, FCC is impatient in the final third and constantly settling for long shots or hopeful crosses resulting in turnovers.

Yoann Damet is building a possession-oriented approach in the defensive and middle thirds. If he can get the team playing simpler and taking advantage of their immediate numbers up situations they will create more opportunities. Then, who knows, FCC might even find themselves celebrating a goal or even a victory.