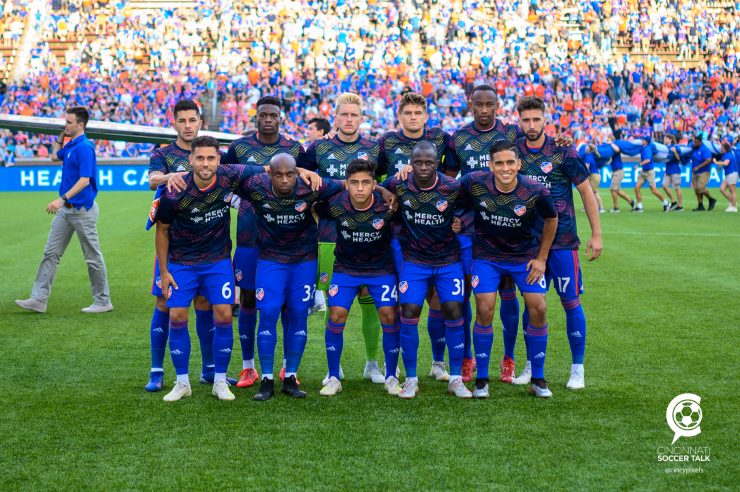 The LA Zlatans visited Nippert Stadium Saturday night, but it was his surrounding cast that played starring roles in the 2-0 victory over FC Cincinnati. Here are our weekly player ratings for the match.

The LA Zlatan’s visited Nippert Stadium Saturday night, but it was his surrounding cast that played starring roles in the 2-0 victory over FC Cincinnati. Emmanuel Boateng scored on a cracker in the 12th minute, and Fabio Alvarez added the second in the 15th minute. With the loss, FC Cincinnati slumps to their fifth consecutive defeat and has lost 10 of 11.

Spencer saved five of the seven shots on goal but couldn’t keep Boateng’s cracker early in the match. It would’ve been a tough ask to make that save, and he has to expect better from Fatai Alashe and Justin Hoyte. The second goal came as a surprise because he couldn’t expect a poor deflection from Mathieu Deplagne/Nick Hagglund that went to Alvarez. The shot wasn’t the strongest, but the awkward bounce of the ball avoided the keeper. I think he’d want that opportunity back, but overall tough to criticize much from Richey’s effort.

Deplagne’s Audi score stems from the miscommunication with Hagglund for second goal. Hagglund and Deplagne came together, causing the ball to drop to Alvarez who hit a decent shot in the goal. He netted -310 points from that play alone, which is harsh because he isn’t the only player culpable. Overall he did a pretty nice job though for much of the night against Sebastian Lleget. He completed 53 of 65 passes, including 16 in the offensive buildup with Kekuta Manneh.

Quiet night from Hoyte. He was a calm presence on the backline, settling them down after the two early goals and provided some crucial last-minute tackles. I would’ve liked to have seen him step up to Boateng on the first goal, but that shot was a thing of beauty.

Hagglund had a -310 ding in his Audi Index too for his role in the second goal, but he was a big reason for Zlatan Ibrahimović’s frustration. The Cincinnati native didn’t give LA’s DP striker space or time on the ball needed to strike the wonder goals we often see on Sportscenter. Hagglund was also a beast in the air winning 7 aerial duels.

Alashe was put in a tough role having to switch positions and handle the speedy Boateng. He was slightly out of position in the first goal, and Boateng made Alashe pay. Outside of that play, Alashe did a decent job pinch-hitting as a right back. He did a nice job up the right side to get into the attack and didn’t look lost within the makeshift back line.

It was good to see Bertone back in the starting lineup for the first time since May 11. He did a nice job holding possession with Victor Ulloa and completed 62 of 72 passes (86%). Now we need him to use his creative ability to hit some probing passes to open up opponents. While 64% possession is a stat that will catch the eye of some, they still need to create more opportunities and Bertone could help going forward.

Ulloa had a quiet but quality night, shuttling play in the midfield for FC Cincinnati. He’s about as solid as it gets, completing 77 of 86 passes (90%). I would like to see a little more of a killer instinct in his offensive game. I think that Ulloa likes to set up his teammates so much that he missed a clear opportunity in the first half when he passed on a clear shot at the top of the box and ended up hitting an errant pass in a tight window to Manneh.

The first overall SuperDraft pick was my man of the match. He was a menace in midfield and was able to get into space and pick out passes for the offense. I’d like to focus on his off the ball movement as my reason for his success. Amaya intelligently picks out small pockets of space behind the attacking midfielders and to either side of the defensive midfielder, causing confusion in front of the back line. At times he had Perry Kitchen guessing if he was going one way or another and allowed him to advance the play with Manneh and Rashawn Dally.

Another bright spot for FC Cincinnati on the night. He had a lot of success taking on players 1v1 up the left. In the 52nd minute, he did a great job on an FC Cincinnati counter, but his cross just missed the diving Dally. His speed caused confusion, as defenders had to respect his take-on ability so they couldn’t cheat one way or another.

It was a mixed bag again for me with Ledesma. FC Cincinnati can’t continue to throw away scoring opportunities, and he needs to get his header from six yards out on frame. There were moments where he wasn’t clearly communicating with Amaya, and plays went for naught. I still have to respect that he is trying to create a scoring opportunity as much as he can. When others try to be conservative with a back pass, Ledesma tries to take players on to get on the scoreboard. I’d really like to see what Ledesma could do with a legit No. 10 alongside him in midfield.

Dally had some moments up front but struggles at times with his touch and getting the ball on goal. If I could point out some positives — he did find some room between the center backs and after watching the tape will have moments learn from and improve upon. Starting in front of a sellout crowd against the LA Galaxy is a tall task for any rookie making his first career appearance, but there were nice moments that will give FC Cincinnati fans hope they might have found a solid contributor late in the draft.

The midfielder had to come in as an injury substitute for Alashe. This is the second time we’ve seen Stanko play as a right back, as he was a late substitute in the season opener. Stanko isn’t the ideal replacemen,t but with a thin roster, interim coach Yoann Damet didn’t have another option. To be fair to Stanko, we couldn’t expect him to get too much into the attack, but he was smart with the ball and performed admirably against a talented Galaxy attack.

Bone came in as a late sub for Dally. Without another forward, Damet had to use Bone as a makeshift striker, but he more played off Manneh late trying to set up play.