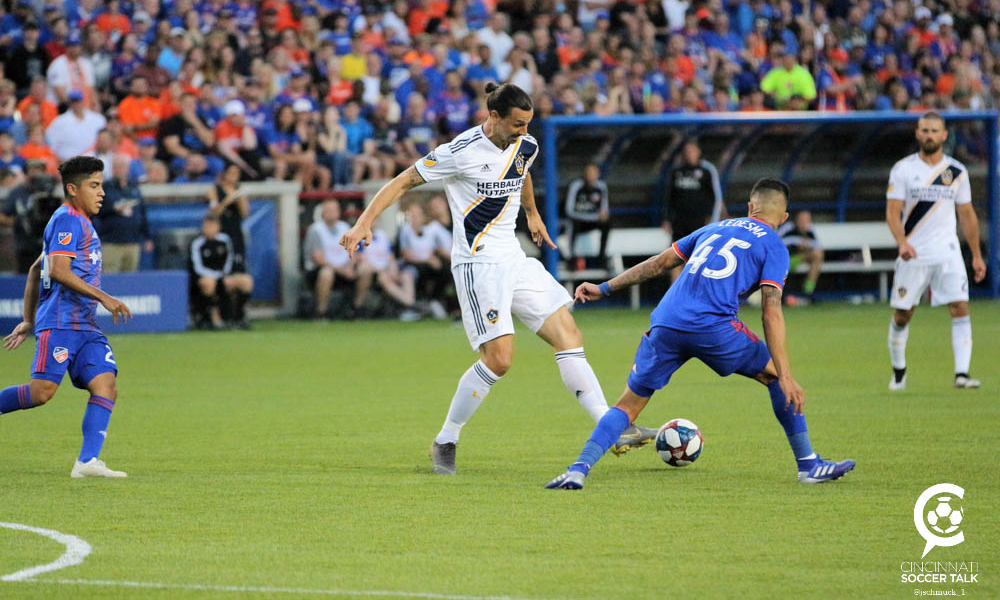 The Orange and Blue improved Saturday at Nippert Stadium after a two-week MLS break but fell 2-0 to the LA Galaxy. Galaxy superstar Zlatan Ibrahimovic was a non-factor.

The Orange and Blue returned to MLS league play after more than a two-week break. Considering its current form, FC Cincinnati was not favored to win the match. That said, it held its own and created some chances for over 85 minutes of the match. Unfortunately, for a four-minute stretch early in the first half, the defense broke down and conceded two quick goals in a 2-0 loss Saturday at Nippert Stadium to the LA Galaxy.

In the 12th minute, from a goal kick, Favio Alvarez chipped the ball to Emmanuel Boateng. Justin Hoyte and Fatai Alashe both marked Boateng, but he played the ball between them to the far post, outside the reach of Spencer Richey.

Just three minutes later, off a throw-in, Sebastian Lletget worked his way down the right side and played a ball to the middle. Alashe attempted to clear but didn’t get a clean touch, and the ball popped up inside the box. Ultimately, Alvarez volleyed it into the far corner for a second goal.

Cincinnati managed to reestablish its rhythm and assert itself but didn’t really have many opportunities. Their best chance came in the 21st minute. Kekuta Manneh’s shot was blocked, and Emmanuel Ledesma tried to head the ball into an open net, but the ball sailed over the crossbar.

The crowd was excited and active throughout the match.

“The support of the fans is huge for us,” interim coach Yoann Damet said. “It’s a tough period but everybody feels that they are behind us. They also see the improvement that we are speaking about. It’s also a part of the process to see that the club is moving in the right direction. I feel that everybody is believing in the vision of the club, and that is very good. That is exactly what we need right now.”

Though Cincinnati had more possession and was more accurate passing the ball, it did not create more chances. More troubling though, FCC had a similar number of chances created but seemed to lack ideas around goal. FCC made more than twice the number of crosses as LA, but the crosses lacked accuracy, with less than 15% finding their mark. This resulted in LA having more than twice the number of shots on goal.