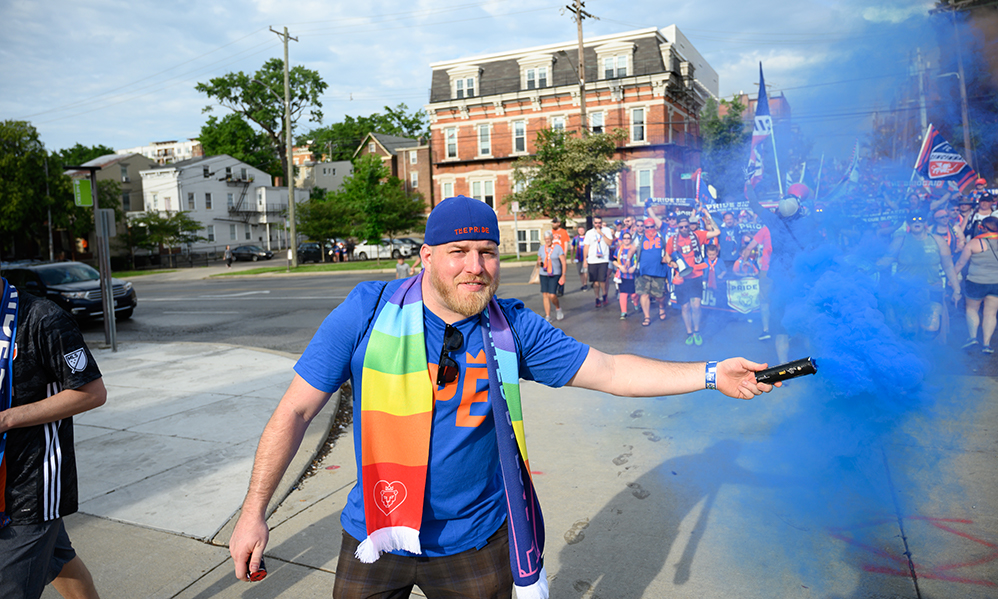 FC Cincinnati and the Cincinnati community show support for the inclusion and representation of the LGBTQ community during Pride Month.

June is Pride Month, and it’s an important time to remember and honor, especially in the world of soccer.

MLS introduced the Soccer For All campaign in March 2018. MLS and its clubs celebrate this initiative during the month of June. Soccer For All embraces everyone regardless of race, gender identity, sexual orientation or socioeconomic status, and it includes our disabled community.

The most important thing Soccer For All promotes is the belief that soccer is for everyone. Soccer For All’s message and purpose is to end discrimination and promote inclusivity.

Playing for Pride is another important initiative to encourage LGBTQ representation and inclusivity in the world of soccer. Spearheaded by Austin da Luz of North Carolina FC, all proceeds are donated to Athlete Ally in the hopes of ending LGBTQ discrimination.

#PrideMonth is less than a day away, but the players are still rolling in to join the #PlayingforPride roster in support of @AthleteAlly and the LGBTQ+ community! 🙌

As of now, there are over 100 players across the American soccer landscape that are participating in Playing for Pride. From MLS to the USL, the NWSL to international clubs, Playing for Pride is including players from all over the world, joining together to support one common goal.

Three players from FC Cincinnati have stepped up and added their name to the list – Spencer Richey, Jimmy McLaughlin, and Tommy McCabe.

pumped to be apart of @playingforpride again this year. in june, ill be donating:

you guys can match my donations or contribute your own at:https://t.co/rA3Fvpbejj 🏳️‍🌈🏳️‍🌈🏳️‍🌈

Richey participated in Playing for Pride in 2018 as well, along with former FC Cincinnati players Matt Bahner and Dekel Keinan. He has always been a vocal advocate for the LGBTQ community. Richey spoke at length about his views at Cincinnati Soccer Talk’s live show in May at Buffalo Wings and Rings.

Really excited to be apart of @playingforpride again this year! I will be donating $25 for every @fccincinnati game this month and another $25 for every FCC win! So happy to support such a great cause

Jimmy McLaughlin, while injured, has also agreed to donate to the cause. Even while recovering from a knee injury, the fan favorite is still donating to Playing for Pride.

As June starts up today, I will be @playingforpride this month. I will be donating $10 for each team win, $10 for each game I play, $10 for any goal/assist. Match my donations for the month at https://t.co/heEsBhWGLA

Tommy McCabe, one of FC Cincinnati’s SuperDraft picks, has also joined the ranks of his veteran teammates.

The Cincinnati community has made it clear that Playing for Pride is not just a talking point. It is something that the supporters of FC Cincinnati really believe in. The Pride and Die Innenstadt, two of FC Cincinnati’s supporter groups, have created and are promoting campaigns for equality throughout the month of June.

The Pride creates a new scarf every year for Pride Month and FC Cincinnati’s Equality Night. All proceeds are donated to Lighthouse Youth and Family Services “Safe and Supported” LGBTQ+ youth program.

Additionally, The Pride also announced a Pride Raiser campaign for June. This allows any supporter to pledge a monetary donation for each goal FC Cincinnati scores in June. Those who are not a member of an SG are also encouraged to pledge donations. As of now, The Pride has received donations totaling almost $150 per goal. These donations are also in support of Lighthouse Youth and Family Services.

In a final show of solidarity with the LGBTQ community, The Pride will also be walking in Cincinnati’s Pride Parade on Saturday.

“Pride Month has come to mean a lot to many members of The Pride. Many of our members identify or fall somewhere on the LGBTQA+ spectrum, as do members of other SG’s… That’s why we ended up designing what we affectionately call the Pride Pride Scarf…all proceeds have gone to a local group called Lighthouse… Their Safe and Supported Program…makes sure that LGBTQA+ teens do not have to worry about becoming homeless… This year, it was a no-brainer to register to march in the Cincinnati Pride Parade, especially with it being the 50th anniversary of Stonewall.” – Jessi Saunders, The Pride

Die Innenstadt works with local organizations year round as community partners, and Pride Month is no different. For the month of June, Mecklenburg Gardens, Die Innenstadt’s pub partner, will be donating proceeds to the Greater Cincinnati chapter of GLSEN.

GLSEN is a nonprofit that started in Massachusetts by a group of teachers. These teachers fight to improve the educational system for LGBTQ students. GLSEN helps fight bullying and discrimination, providing a platform for LGBTQ students where they can prosper and grow.

Along with this contribution, Die Innenstadt’s Christina Koplyay and Bob Brumberg worked together to design their Love is Love shirt fundraiser. DI is also accepting pledges for each goal scored by FC Cincinnati in the month of June. Currently, DI has received donations totaling over $140 per goal. These donations will also be received by GLSEN.

Pride Month, FC Cincinnati’s Equality Night, and Soccer for All all have one common purpose — inclusivity, representation, and acceptance. Together, as one soccer community, we can work towards this goal together.