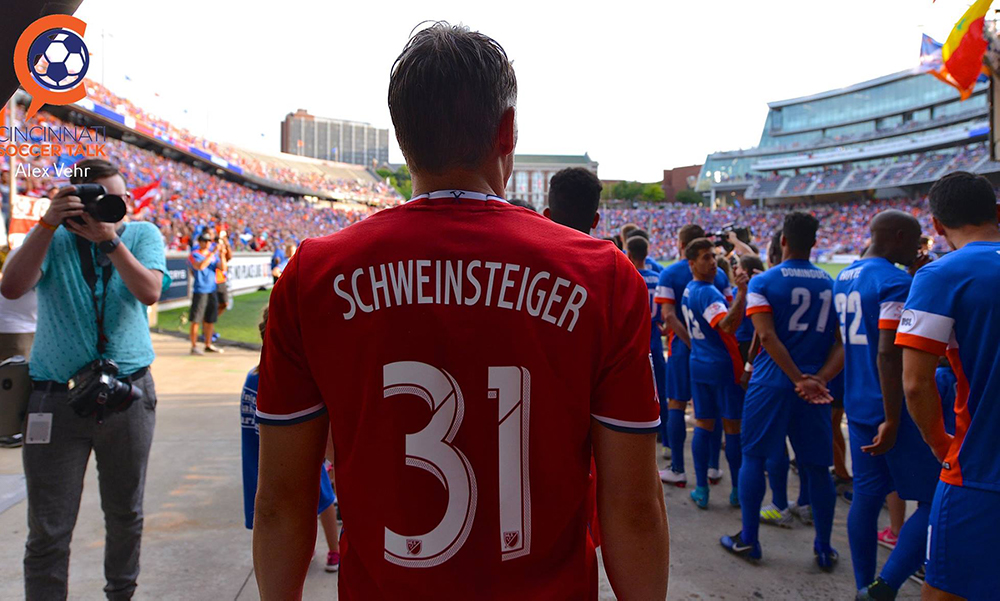 Despite another MLS losing streak and getting kicked out of the U.S. Open Cup, there’s a bright side for FC Cincinnati fans. In 2017, Bastian Schweinsteiger visited Nippert Stadium. In the coming weeks, so too will former European stars Zlatan Ibrahimovic (we hope) and Wayne Rooney.

While toiling for three seasons in the USL, playing in mostly empty grounds in soccer deserts like Pittsburgh and Charleston while attempting crosses through water-logged dirt infields in Louisville, nights like Saturday are what FC Cincinnati fans had always hoped for – big crowds, big names, a national stage.

Nippert Stadium likely will be sold out when the star-studded LA Galaxy, led by Zlatan Ibrahimovic, play here for the first time. More than 30,000 tickets were sold more than a week prior to the match.

When Zlatan was wrapping up his career at Paris Saint-Germain, where he scored 113 goals in 122 appearances, the idea that he would one day play in Cincinnati, at Nippert Stadium, against our own MLS side would’ve sounded like a pipe dream at best. Next month, Wayne Rooney and DC United will play here.

Don’t pinch yourself — it’s real. For soccer fans in the Queen City, it’s the stuff of dreams.

And maybe, this is where the focus needs to be right now.

From a results perspective, this is a rough time to be an FCC fan. The club resides at the bottom of the Eastern Conference standings, having lost four straight MLS matches, last week’s victory over Louisville City in the U.S. Open Cup aside.

An already thin roster is even thinner with five players out on Gold Cup duty, a handful of injuries and Kenny Saief’s tenure ending almost before it began. There’s uncertainty with the managerial post long-term and a new general manager who’s still transitioning from his current club.

Could things get better under Yoann Damet? Maybe, maybe not.

Seven points in the first four matches, including a draw at Atlanta and wins over Portland and New England, injected a dose of optimism into the fan base. But reality bit hard over the ensuing weeks as the losses piled up, ultimately costing Alan Koch his job after only 11 matches.

You can spend the rest of the season debating roster construction, asking why the manager was fired so soon or why a general manager was hired so late, and lament the lack of results. Or, you can choose a different perspective.

Fact is, FCC is in MLS to stay, much to the dismay of the pro-rel faction. The future of this club is just beginning with a new West End stadium at least two years away and the process of building a roster and the overall organization in its infancy.

But on Saturday, the man who once said “I can’t help but laugh at how perfect I am” and once likened himself to God, will play here. The same man who scored 62 goals in 116 appearances for Sweden and had spells with Ajax, Juventus, Inter Milan, Barcelona, and Manchester United. On Saturday, he’ll likely take the pitch in Clifton, in a match that counts.

There were concerns that he wouldn’t. Ibrahimovic said last year that he would not play on artificial surfaces in fear of reinjuring his knee after a career-threatening ACL injury while with Manchester United in 2017.

The Swedish superstar changed his tune this season, and FCC fans marked June 22 on their calendars.

But Saturday’s game against the Galaxy isn’t the only marquee match left on the schedule.

There are home and away Hell is Real derby matchups against the Columbus Crew in August. Record-breaking goal scorer Josef Martinez and defending champion Atlanta United play here in September. Toronto and New York City FC will visit Nippert as well.

Good news, there’s no Rochester or Richmond on the schedule.

Here’s hoping the results on the pitch take a turn for the positive in the coming months. The Gold Cup will end and reinforcements will come. Perhaps Greg Garza will find his way back. A few more goals would be nice.

But forget what other expansion franchises have accomplished in their first seasons. None of them had to build their inaugural squad in fewer than 474 days. FCC had 277.

The pressure to win will come when the new stadium opens, when the building is done, when the franchise is ready to move from being a fledgling expansion club to one that’s ready to compete in a top-flight league.

For now, FCC fans should just enjoy themselves. On Saturday in a jam-packed Nippert, sing, chant, paint the place Blue and Orange. Toss back a few pints. Have fun. It’s what you always wanted.

Zlatan, have mercy on us.