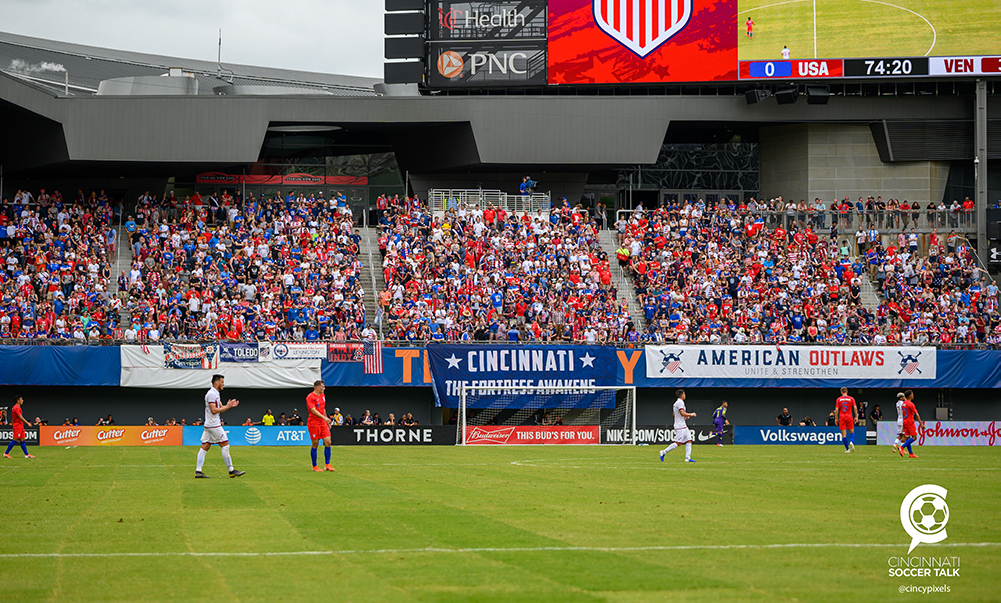 The United States men’s national team played in Cincinnati for the first time on Sunday and gave the Nippert Stadium atmosphere praise after the match.

Boyd started at forward for the USMNT in the 3-0 loss to Venezuela. The New Zealand native made his one-time FIFA nationality switch last month. Though his team was on the wrong end of Sunday’s scoreline, he called his debut a dream come true.

“Hearing the national anthem and singing it with everyone in the crowd was special for me,” Boyd said. “It gave me chills. I’m happy in making the debut but obviously disappointed in the result.

“Our crowd here in America is very encouraging, even to the last minute of the game. It was an unfortunate result but the crowd was top notch. I just have to say I appreciate the crowd coming out. I’m sure we’re going to get some better results, and we’re definitely going to work hard to get those results.”

The U.S. begins Gold Cup group play on June 18 vs. Guyana. Sunday marked the first time the USMNT played in Cincinnati. Boyd wasn’t the only one to give the Nippert experience and crowd of 23,955 high marks.

Unlike most of his roster, coach Gregg Berhalter has been in Nippert before. He coached the Columbus Crew in a 1-0 loss to FC Cincinnati in the 2017 U.S. Open Cup.

“Everything about this stadium is great,” he said. “I love the intimidating environment, I love that the fans are right on top of the field. It creates a great environment … everything that we imagined it would be.”

Goalkeeper Zack Steffen was an unused sub for the Crew in that 2017 USOC match. He defended the goal in front of the Bailey, manned by a combination of Cincinnatians and American Outlaws, in the second half.

“I thought the fans were great,” Steffen said. “It was loud at times. It was hard for me to talk to my back line. When it’s like that, you know it’s a good crowd.”