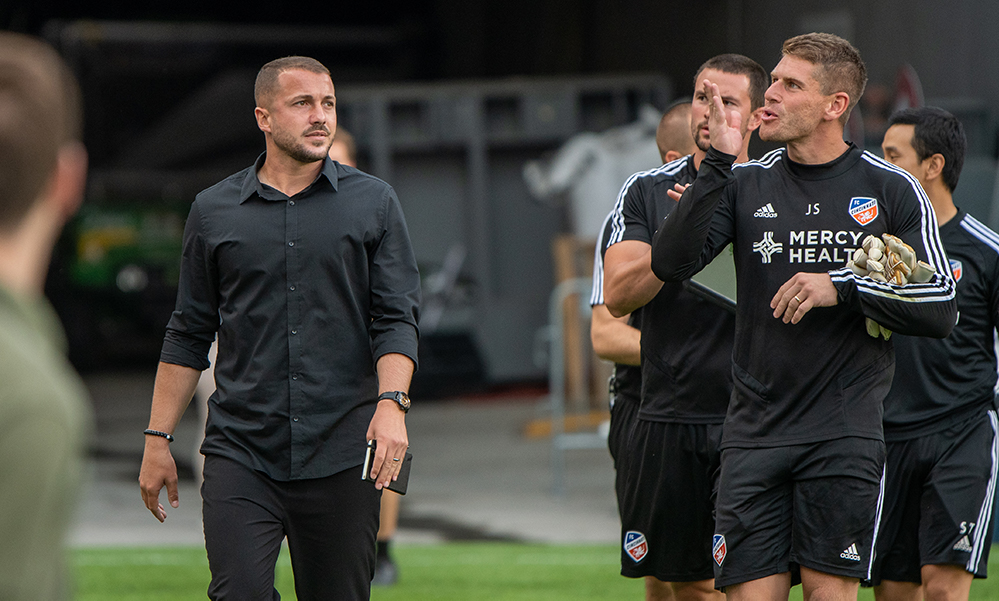 MILFORD – Despite not knowing what his future holds, Yoann Damet is approaching every day as FC Cincinnati’s interim manager focused on the task of improving the club and getting the most out of his players. His tenure could be temporary, it could be permanent. For now, Damet isn’t thinking about himself, at least not outwardly.

“My mission is to make sure I take care of the club, that we transition well to the future,” Damet said. “I’m fully focused on that task.”

For FCC’s players, Damet is a known commodity. He is respected. He is well-liked. In many respects, he’s one of them. At just 29, Damet is the youngest head coach in MLS history. With his pressed, all-black game-day attire, Damet looks more like the frontman for a Brit-Pop band than an MLS manager.

He spent three seasons as an assistant coach for FCC before being handed the interim tag when Alan Koch was fired earlier this month. Handing the keys to Damet made sense. Familiarity between him and the players made for a smoother transition.

“It’s easy for him, because he’s close to us,” midfielder Roland Lamah said. “We joke with him, but also we listen to him. He is doing good things. It’s a good community. We learn a lot. It’s been positive.”

The results have been noticeable and measurable.

There was a 5-1 setback at Orlando City with a depleted squad, but that was followed by an encouraging performance in a 2-0 loss to the New York Red Bulls in which FCC was the more attacking team for the bulk of the match, with 12 shots, six on target.

“Every game now we create a lot of chances and the confidence is coming,” Lamah said. “We just have to keep working and believe and this team will have a chance.”

Players talked a lot this week about sticking with the “process” that Damet has instilled. Doing this in the middle of a season is as difficult as it gets. If FCC hires a permanent replacement for Koch before the end of the season, it will be the third process that the players have had to acclimate to — in an expansion year. Not an ideal situation.

“The most important thing was to find the priorities and focus on that,” Damet said. “It’s never easy in the middle of the season. It’s tough to decide what is the main thing to work on, so we had to do a bit of everything. Offensively, defensively, is it more in the buildup, is it the final third? Now after three weeks, it’s easier to make an assessment.”

Injuries aren’t doing Damet any favors. Greg Garza is out for an undetermined amount of time with a calf injury. Allan Cruz (ankle), Fatai Alashe (hamstring), Leonardo Bertone (hamstring), Kenny Saief (hamstring), and Corben Bone (shoulder) are working their back into the squad.

On Saturday in Colorado, Damet will be without Kendall Waston, who is suspended for one match with five yellow cards. On Tuesday morning, Damet said he was considering a couple options to don the captain’s arm band in Waston’s absence.

Damet isn’t looking over his shoulder, despite rumors swirling about who FCC might or might not hire as its permanent head coach. It is possible team president Jeff Berding and ownership might want to make a big-splash hire. At least for now, Damet isn’t concerned about that.

“I have the full support of the club,” Damet said. “I feel that every single day. That’s what allows me to do my job the best I can every single day. I focus on the week and what I can control. The focus remains the players and the club. That’s where my concentration is.”

The mood in the locker room following Saturday’s difficult loss to Red Bulls wasn’t indicative of a club being fractured at the seams. In fact, the message was consistent from player to player – stick with the process. There is a belief in what Damet is trying to instill. For the moment, that’s all that’s important.

“I watched the game again and I was happy with the performance, and that’s what I told the players,” Damet said. “There’s a lot of positive things we can build on. The work rate and the mentality in the game, the attacking movement and the defensive shape. We will address some things in the coming days.”