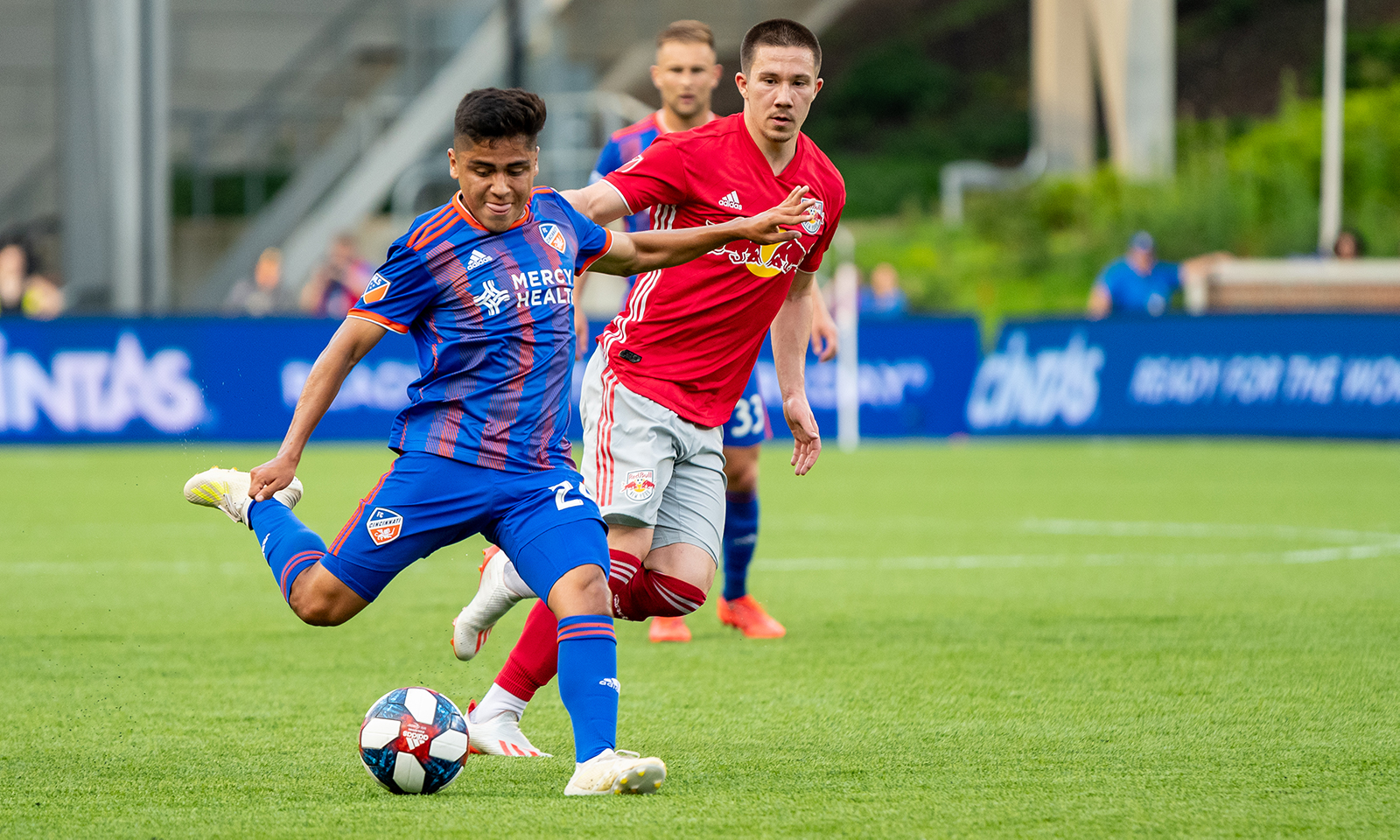 Following Saturday night’s gut-punch of a loss to the New York Red Bulls, FC Cincinnati goalkeeper Spencer Richey said his team remains focused more on the process of acclimating to a new system under interim head coach Yoann Damet than the results, no matter how increasingly frustrating they have become.

“In the short-term, we’re trying to focus more on the process and the game-plan and the style of play that we want to implement,” Richey said. “In a weird way, we would rather play well and try to play a certain style and mentality and lose games than win games luckily.”

Unfortunately for FCC, luck played no factor in Saturday night’s 2-0 loss, at least not for them or for the 28,290 raucous fans who packed Nippert Stadium only to be silenced by two Red Bulls goals in the final 20 minutes.

It was the second-largest home crowd this season, behind the opener against Portland.

For much of Saturday’s match, FCC was the better team, more closely resembling the one that had an 83% accuracy in a 2-1 win over Montreal on May 11 with 571 passes completed, and not the one that was dealt a 5-1 defeat at Orlando City the following week.

“Tonight we dominated a lot of the game,” said Victor Ulloa. “Unfortunately, we couldn’t get one to bounce in the net. The first goal they get is our mistake and the second one we’re pushing for a tie so we’re stretched. We know we’re in a tough situation and need to get out of it. We need to keep fighting and keep working.”

In the sixth minute on Saturday, Roland Lamah’s ball through to Fanendo Adi who was clear on goal, but his shot was right at Luis Robles. Adi made his first start since March 17 and overall played well.

“I’m very happy with Adi,” Damet said. “His mentality and his leadership and importance in the team. I’m very happy with what he showed in 90 minutes. I think we used him too much in the air and didn’t create enough chances for him on the ground. But I saw a lot of positives.”

Frankie Amaya asserted himself at both ends of the pitch in the first half. His bid for his first career goal in the 12th minute was on target but deflected over the bar by Robles. Amaya produced a 91% pass accuracy with four tackles and was heavily involved throughout.

“He brings a lot of energy,” Damet said. “He has more freedom on the field. He’s young so he is less robotized on the field with how we are trying to play.”

FCC had six shots and four on target in the first half. The Red Bulls had three shots, but neither was on goal. Robles finished with four saves, all in the first half, while Richey was mostly unbothered until the latter stages.

Although New York held a slight advantage in possession 53% to 47% in the first half, FCC was far more productive with its time on the ball.

FCC’s back line got thinner when Kendall Waston’s yellow card in the 58th minute resulted in a suspension for next week’s match vs. Colorado.

The start of the second half was a bit more sluggish for FCC. Caleb Stanko went wide with a shot off an Amaya corner, but scoring opportunities didn’t come at the frequency of the first half.

The first goal of the match came in the 78th minute off a giveaway by Mathieu Deplagne in the final third that was scooped up by Alejandro Romero Gamarra, a substitute in the 59th minute who converted the Red Bulls’ first shot on target into a 1-0 lead.

As the Red Bulls players celebrated, Deplagne was on his back, dejected on the pitch.

“I’m disappointed for him,” Damet said. “He’s been one of the most consistent players on the team. I don’t look at that much more. We’re all going to have moments like that.”

“We deserved better than that for tonight,” Damet. “The mentality of the group, the confidence that they played with. We tried to create and have more connections on the field and impose ourselves more. I think the guys showed a lot of progress.”

According to a club spokesperson, Saief and Mattocks were late removals from the squad.

Saief, who has expressed his displeasure earlier in the week with a lack of playing time, was unable to complete training on Friday and had to receive more treatment on his hamstring.

Mattocks also left training on Friday. He initially was included in the 18-man matchday roster but was removed after being reevaluated on Saturday.

FCC completed better than 70% of its 338 passes on Saturday. It outshot New York 12-8, including 4-2 on target. FCC was edged in possession, but barely. Following the match, there was plenty of frustration to share, but little blame.

“You have to pick your guys up,” Richey said. “Unfortunately, we’ve had to do that quite a lot as a team lately. The more that we can stay positive and stay together in these moments, we’ll be better off for it. Obviously, sooner rather than later, we need to start worrying about results.”