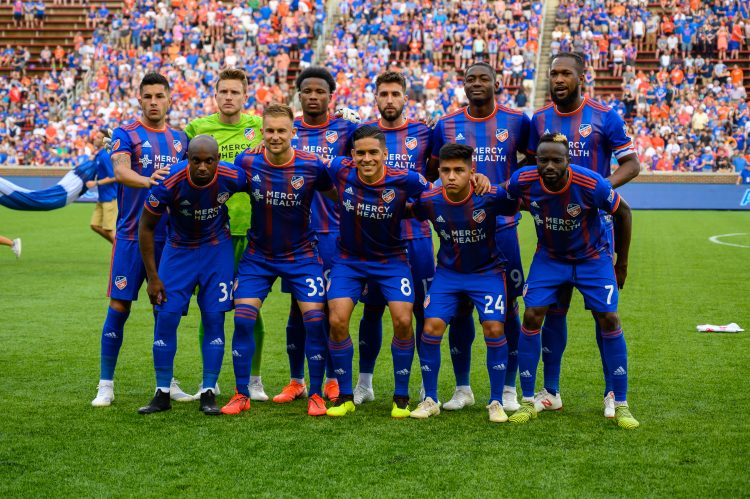 Here are our player ratings for FC Cincinnati in its 2-0 loss to the New York Red Bulls Saturday at Nippert Stadium.

FC Cincinnati had a solid performance at home in front of the second-largest crowd of the season but was overcome by two late second-half goals by Kaku and Omir Fernandez.

Richey really didn’t have too much to do Saturday night. The two shots on goal for New York both ended up in the back of the net but you couldn’t fault the keeper in either instance. Maybe you would’ve liked to see him come out a little further to pressure Kaku to take an uncomfortable shot on the first goal, but there have been multiple times this season where Richey has come up big to overcome similar errors by FC Cincinnati.

The Frenchman got the ball caught under his feet leading to Kaku’s game-winning goal. Deplagne was unable to accept the pass back clearly giving the ball to Kaku alone on goal. The mistake was costly, and it’s a shame it happened to a player who has done everything asked of him so far for the Orange & Blue. Outside of the goal, he was solid on defense and going forward. He worked nicely with Roland Lamah and Frankie Amaya, completing 7 of 9 passes in the final third. His strike in the 83rd almost got the home team on the board, and you have to like his confidence to get forward after his blunder.

We know Waston is tremendous in his box. He rarely loses the ball in the air (five clearances), and his last-second defending (four tackles) is quality, but he is getting caught far up the field too often, and it’s burned the club several matches in a row. In the 58th minute, he was caught out and had to pull down the Red Bull attacker, leading to his fifth yellow card of the year. In the 91st he tried to step up to break up the counter-attack but whiffed on the clearance and left the back line a man down. Waston is the captain, but he needs to be more disciplined. Right now, one goal is make or break for the club, and he needs to understand his role and how crucial it is to keep everything in front of him as much as he can.

The former Arsenal man put in other solid 90 minutes Saturday night. With FC Cincinnati looking to possess the ball more, Hoyte didn’t have a problem stepping up into the midfield at times to relieve pressure and helped get the ball moving up the pitch. He limited the effectiveness of Tom Barlow up top, and if not for a comedy of errors leading to the two goals, deserved credit for a clean sheet on the night.

I’m starting to feel for Powell. He looks like a guy playing with little confidence at the moment. It seems like when he gets forward he’s unsure what to do with the ball and makes the pass a second too late. When FC Cincinnati loses the ball, Powell is unable to pick out his defensive assignment and too often is marking air instead of his man. Case in point was the 91st-minute goal. Powell hustled to track back on the turnover, but when he got into the box, he was caught watching the ball instead of Omir Fernandez, leaving the young forward alone for the header leading to his first MLS goal. With the lack of goal scoring by FC Cincinnati, it can not afford to have Powell out of position on defense. The margins are small, and it needs the defense to be lock-tight at home.

One of my biggest regrets so far in 2019 for FC Cincinnati is the fact that it has been unable to incorporate Caleb Stanko. The former Freiberg midfielder is heavily talented, and interim coach Yoann Damet was finally able to slot him in the destroyer role as a deep-lying defensive midfielder ahead of the two center backs. This has been a move I’ve been talking about because Stanko isn’t going to put a foot out of line often and will allow FC Cincinnati to get another midfielder into the attack. It’s yet to be seen if he can hit the long pass and dictate play out of the 6 role like Victor Ulloa did two weeks ago, but his move gives Damet plenty of flexibility to take some chances on the offensive side of the ball.

It says a lot of 18-year-old Frankie Amaya that he was my man of the match for FC Cincinnati. It’s great that he has taken the bull by the horns making the most of his opportunity, but his teammates need to do more to help the young midfielder. Amaya is typically the first player in Orange & Blue to apply pressure when they turn the ball over, and he is getting more comfortable getting into the attack. He’s not afraid to take an opposing player on to create a chance for himself. He almost opened his MLS account in the 12th minute after he dribbled past a pair of New York defenders and blasted a shot towards the right corner of the goal. Luis Robles tipped it above the bar, but you have to like the young man taking these chances. Yes, it was disappointing seeing his name left off the U-20 World Cup roster, but these matches heading into the Gold Cup break will be critical for his development.

Damet moved Ulloa out of a deeper pivot role and tried to get him into the attack alongside Amaya. Two weeks ago we saw Ulloa get on the ball nearly 80 times, but Saturday night Ulloa wasn’t as effective, completing just 17 of his 25 passes. He was unable to get into a rhythm on the right side with Powell and Emmanuel Ledesma. I’d like to see what he could do with Kekuta Manneh or Kenny Saief as a partner.

I’m really interested how the introduction of Fanendo Adi into the lineup will correlate to the production of Roland Lamah. You could see early in the match when Lamah’s lateral pass to Adi put the forward one-on-one, and if not for a great reaction save from Robles, the Orange & Blue would’ve been ahead. I like his awareness to switch the field to change the angle of attack, which we saw several times during the match. His pass across the field to Deplagne in the 83rd minute caused another dangerous chance. If FC Cincinnati can connect more passes and find someone to solve the right side of the field, we might see Lamah be a critical player heading forward.

Three fouls, no shot attempts and 41.7% passing are all stats that are unacceptable for a starting attacking player. FC Cincinnati had little to nothing going forward on the right-hand side of the field and Ledesma had a large part to play in that. He was unable to find a pathway into Adi, and if he can’t get things going in the final third, Damet will have to experiment with different options to unlock the offense.

People are going to give Adi grief until he starts putting the ball into the back of the net reliably, but the forward put in a quality 90 minutes for the first time since Week 2. For one of the first times in his Cincinnati career, the team was set up in a way to utilize his talents to run in behind defenders to create open spaces. When the club can hold possession, he can focus on creating holes instead of holding off multiple defenders on long balls. He nearly scored in the sixth and 40th minutes and should’ve opened his account for the year if not for the phenomenal play of Robles. While the Orange & Blue weren’t able to get on the board Saturday night, it was key to get Adi 90 minutes and some time on the field to get familiar with his new teammates like Amaya.

Nazmi Albadawi made his MLS debut Saturday night. He came in as a late sub for Victor Ulloa and in his limited time didn’t look out of place. With players coming and going during the Gold Cup break and the start of the US Open Cup, we could see more time ahead for the midfielder.

The winger came in for Ledesma but unfortunately, Kekuta Mennah wasn’t able to get much going late in the match. During his time, FC Cincinnati was scrambling for an equalizer and fell back on a lot of long balls going forward.

The results might not have changed much in Damet’s three matches in charge, but FC Cincinnati is noticeably playing a different brand of soccer. My favorite part of his game plan was to drop Stanko centrally in the destroyer role ahead of the back four. FC Cincinnati created more chances (12 to seven) and shots (12 to eight). I hate referring to results as unlucky but his squad should have been up at half after dangerous chances from Adi and Amaya were parried away by Robles. It’s tough to claim a moral victory, but FC Cincinnati went toe to toe against a solid Red Bulls squad and at worst should’ve come away with a result from his set up.