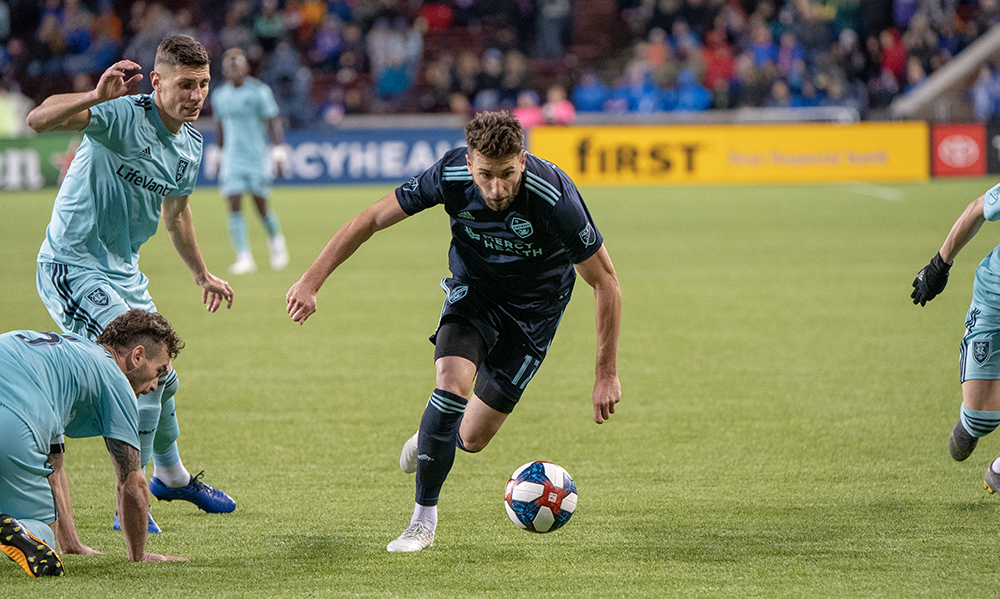 FC Cincinnati faced off against Orlando City SC for the first time on Sunday afternoon. FCC was looking to capitalize off of a win at home the previous week coming off the back of the firing of former head coach Alan Koch and also breaking a losing streak. The win was due in part to the leadership of interim head coach, Yoann Damet, who served as assistant coach under Koch. The other factor was the apparent renewal of mentality of the players and a sense of purpose and excitement.

FCC entered the match with a record of 3-2-7, compared to Orlando City’s record of 3-3-6. There was a lot on the line for both teams, as Orlando City is led by James O’Connor, who is seen as a rival for the boys in Orange and Blue. O’Connor was the head coach for Louisville City FC, FCC’s biggest USL rival, between 2016 and 2018. When O’Connor was promoted to head coach at Orlando City, he brought Louisville City defender Kyle Smith and goalkeeper Greg Ranjitsingh with him.

Even with FCC sitting at the bottom of the table in the Eastern Conference after Sunday’s 5-1 loss to Orlando, there is still something to be said about the renewed excitement. The team has seemed to be more positive during practice, and Damet seems adept at putting players in the right position and keeping them motivated. Damet rolled out a similar lineup to the one he used against Montreal, with the exception of Eric Alexander in as a central defensive midfielder for Leonardo Bertone. Emmanuel Ledesma also received another start, along with Kekuta Manneh, two powerful wingers that have the ability to bring in a rush of adrenaline. Frankie Amaya also got another start after proving himself a vital piece of the team in the last few matches.

Orlando started the match with a heavy offense, passing and moving closer to the box. Defender Kendall Waston looked for a block but hit the ball the wrong way, allowing Orlando a corner kick in the first three minutes. Orlando played it short and didn’t capitalize. Minutes later, defender Greg Garza connected with an Orlando player, walking off the pitch and staying down. FCC played with 10 men while Garza was taken off on a stretcher to the locker room for evaluation. Alvas Powell subbed in to replace Garza in the 10th minute.

Ledesma won the Orange and Blue a corner kick in the 16th minute, with the intention of ending up by Waston, but it fell short. Orlando took possession, running down the pitch toward the goal, but Powell was at his feet the whole time, stopping the run in a crucial play. Orlando pressed further, getting a corner kick, but Victor Ulloa easily kicked it away. Darren Mattocks ran the ball down the pitch in the best chance FCC had all match to score, passing to Ledesma. Ledesma went for a shot, but it bounced off of the crossbar, an act that has been recurring for the Orange and Blue all season.

In the 25th minute, Mattocks was the first FCC player to get points on the board with some beautiful footwork in the midst of three defenders. It was a wonderful play, with perfect timing and pause, getting the opposing defenders right where he wanted them. This fueled FCC’s momentum, but Orlando still excelled offensively, earning a corner kick in the 31st minute, and keeping Spencer Richey on his toes.

After a brief hydration break, play resumed with Orlando running down the pitch. Tesho Akindele found the space between FCC’s center backs and launched a shot, barely missing the tip of Richey’s fingers. The match was even at 1-1 in the 38th minute.

Orlando kept possession with Nani running down the pitch, looking for another shot. FCC defender Mathieu Deplagne headed it away, leaving Orlando with a corner kick. Nani took the corner kick but didn’t capitalize. The first yellow card of the match was issued minutes later on Orlando City’s Will Johnson for a foul on Kekuta Manneh.

Four minutes of extra time was added to the first half with Akindele playing towards another goal. But the shot landed perfectly in Richey’s hands, keeping the score level. Towards the end of stoppage time, Orlando’s Seb Mendez received a yellow card for a foul on Amaya, resulting in a free kick for the Orange and Blue. Ledesma took the free kick, Waston heading it off, and Deplagne trying to head the ball in, but it was just barely blocked by Brian Rowe, Orlando’s keeper.

FCC was awarded a corner kick, which resulted in nothing. Orlando ran down the pitch, where Powell was carded, resulting in an Orlando corner kick in the seventh minute of stoppage time. The whistle for the half blew and the score was still at 1-1.

The second half started with the most firepower from Orlando that could be seen all match. Within the first two minutes of the second half, Richey had blocked multiple shots. In the 49th minute, video assistant referee reviewed for a foul on Kendall Waston, rewarding Orlando with a penalty kick. Richey blocked it easily enough, but Nani scored off the rebound, making the score 2-1.

This opening play of the second half set the tone for FC Cincinnati, with the boys in Orange and Blue showing a bit of a sluggish pace. Whether that was because of the heat and humidity or the drastic change in play, it was clear something needed to change. Barely 15 minutes after the start of the second half, Nani put another ball in the back of the net.

Frustration was mounting as Powell was called for a foul outside the box, throwing his shoulder into an Orlando player. The foul resulted in a free kick for Orlando just outside of the box. Thankfully the free kick resulted in nothing, but the fatigue and frustration were clear on the faces of the boys in Orange and Blue. Akindele got his brace in the match after a corner kick, resulting in a 4-1 lead.

With a three-goal deficit, Damet subbed in Fanendo Adi for Darren Mattocks. Damet also subbed in Kenny Saief for Kekuta Manneh in hopes to bring in more offensive firepower that was desperately needed. FCC seemed to revert back to old ways of passing in the second half.

The match got chippy from there, with three yellow cards being distributed within five minutes to Ulloa, Amaya and Orlando City’s Dom Dwyer.

After the second hydration break of the match, play resumed, and the pressure was on for FC Cincinnati. Dwyer, a player who has been crucial to Orlando City’s offense this season, scored off of the corner kick, making the score 5-1. The match remained chippy, FC Cincinnati playing under pressure, knowing how important getting some points out of this match would be. Both teams tried to keep and capitalize off of possession, but both teams were unable.

Orlando was given a corner kick in the last minute of stoppage time, playing it short, but the final whistle blew.