Coach Gough breaks down the key plays of from the Orlando City match to see what went right and what went wrong.

Eight days, two hours, and 37 minutes. That’s about how long it took for the FC Cincinnati faithful to come crashing down from the high experienced following interim coach Yoann Damet’s debut win over the Montreal Impact. So, what happened to the possession-oriented, high volume passing team that we saw last week? Dissecting the key moments in the match can help us determine if the high of last Saturday was a mirage, or if the low of this Sunday was a hiccup along the path to a competitive team.

It All Started as Planned

To begin the game FC Cincinnati did not have as much of the ball as it did against the Impact. This fact was not alarming since they were playing on the road and without three of the 11 starters from the Montreal match (Leonardo Bertone, Roland Lamah, and Allan Cruz were not in the squad). However, the game plan was the same. When in possession, FC Cincinnati looked to string short passes together, move the ball around the field, and expose gaps in the Orlando City defense. Seventy-three of its 79 passes in the first quarter of the game were classified as “short.”

The Darren Mattocks goal came in the 24th minute. It began with Frankie Amaya picking the ball up on the edge of his defensive third and finding Eric Alexander in a pocket of space in the midfield. 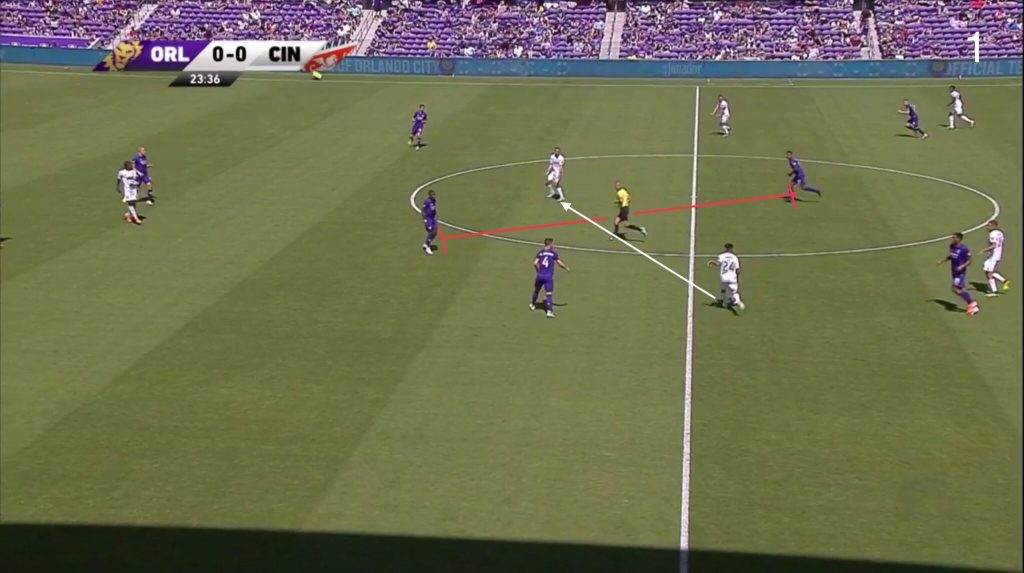 As was the case in Damet’s first match in charge, the play was dynamic with Alexander hitting an aggressive pass into a slashing Mattocks, who was running in behind the Orlando City back line. 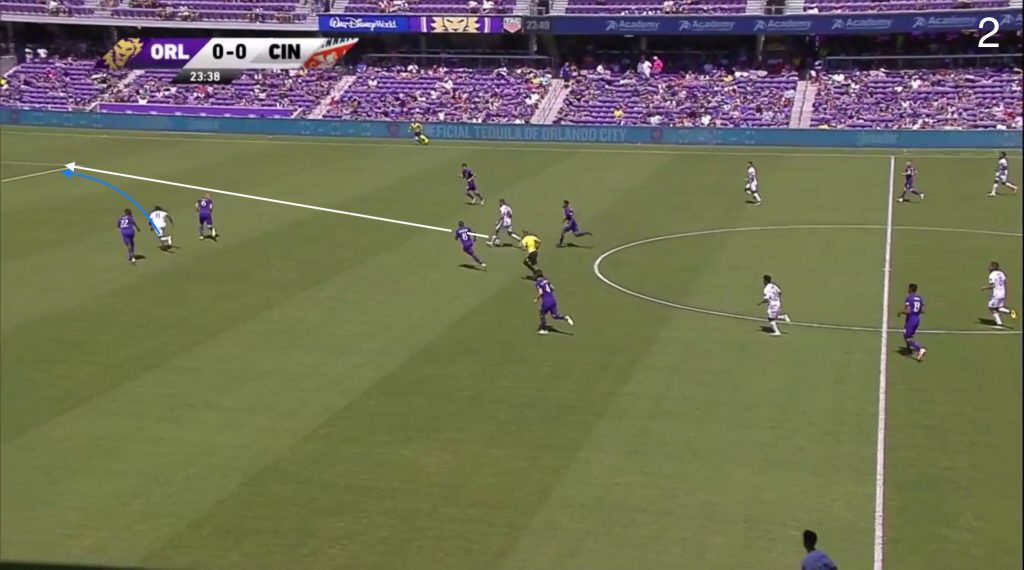 Though Mattocks scored with a moment of individual brilliance, the goal was a sign of the tiring legs and lack of effort that would characterize the rest of the match. Mattocks said of his goal, “I was actually looking for a pass to one of my teammates to make that run and I saw no one in the box but me.” 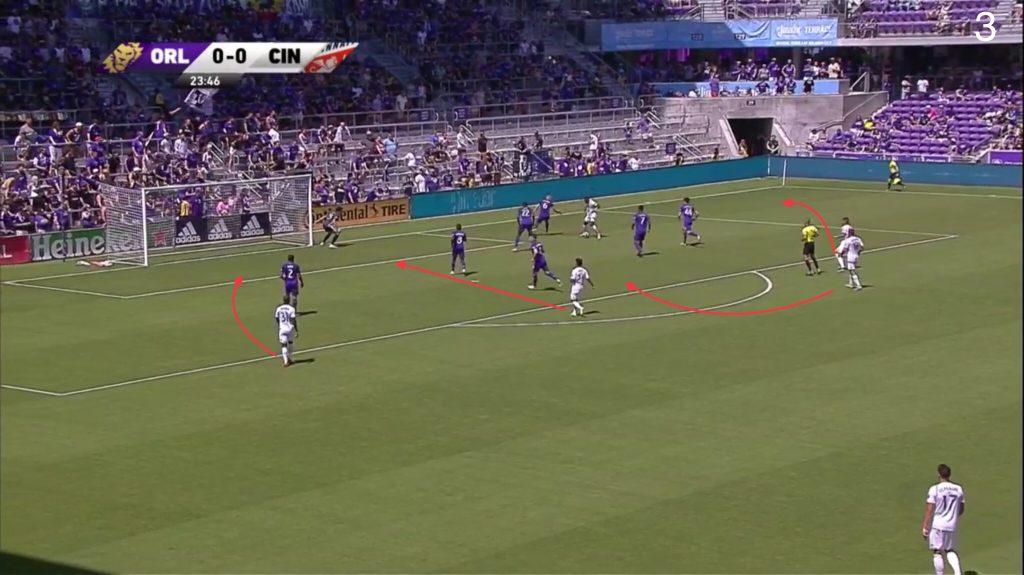 Mattocks did extremely well to control the ball and find the space to unleash his shot. However, Kekuta Manneh elected to not make a run to the back post. Amaya stood at the top of the box instead of gambling on a near post run. Alexander and Victor Ulloa stood next to each other gazing onward instead of attempting to find angles to provide Mattocks some support. The score was 1-0 to the Orange and Blue, but the signs of a cracking foundation were growing.

I have been an open critic of Bertone and his positional awareness, or lack thereof. However, the injury that forced him out of the squad proved crucial in Orlando City’s ability to dominate the FC Cincinnati midfield. Tesho Akindele’s leveler was illustrative of that fact. 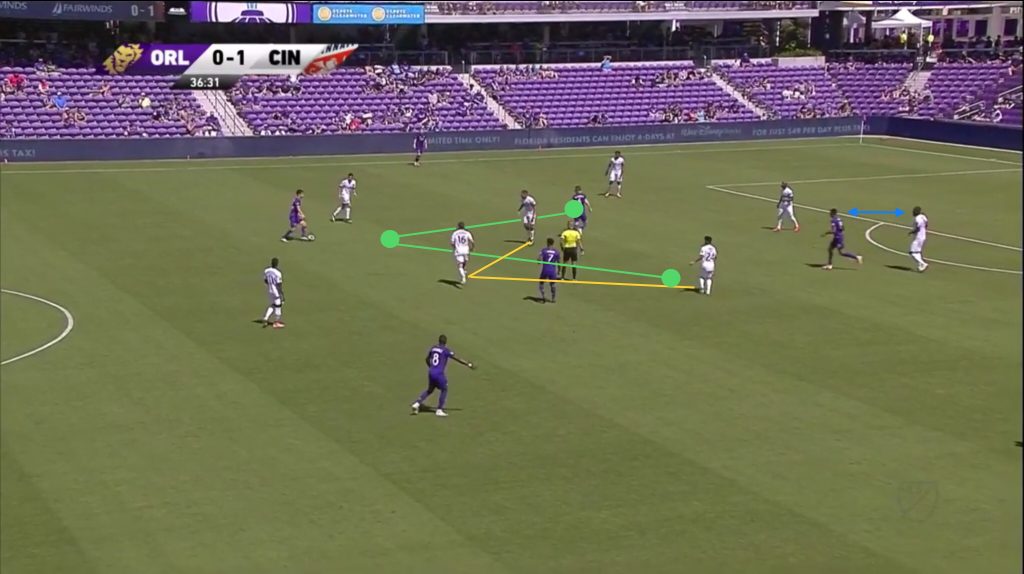 When forming a midfield triangle, the angles that the midfielders play toward the ball and off of their teammates are crucial to eliminate the opposition’s ability to play penetrating passes. The rule of thumb is that the midfield triangle should form an arrow that points in the general vicinity of the ball (in green above). FC Cincinnati’s midfield slowly reacts as the ball shifted from the right to the left side of the field. This leaves João Moutinho with no pressure, and free to find Will Johnson in behind the FCC midfield. 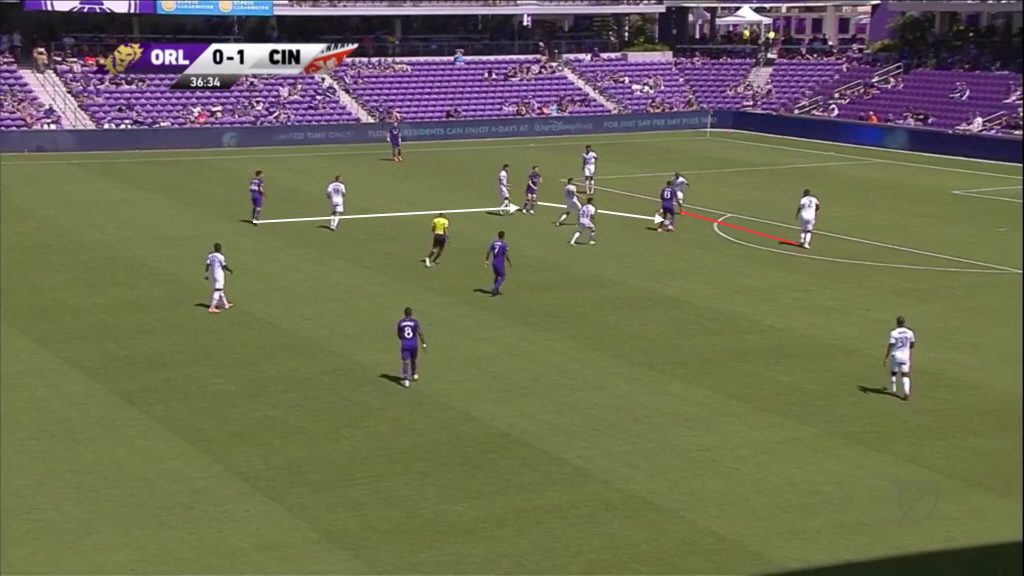 The midfield was unable to prevent the penetration, and credit is due to Johnson who made a lovely touch to a checking Akindele. Akindele’s ability to get off the shot provides another point of emphasis for the FCC defense to analyze in film sessions this week. If Justin Hoyte and Kendall Waston are going to continue to partner in the center of the FCC defense, the communication between the two needs to improve. Akindele found too much space between the central defenders to get his shot off, albeit with a deflection that helped take it over Spencer Richey’s head and into the FCC net.

A Rush of Blood to the Head and Bad Luck Bookends

The game-winner for Orlando City has gained infamy as replays showed Waston embracing his inner WWE superstar and body slamming Lamine Sané during an Orlando City corner kick. The fourth goal for Orlando was a bit of terrible luck as a corner kick unknowingly deflected off of an Orlando City player and landed at the feet of Akindele. He easily shot it home, his second of the match. However, these goals book-ended Nani’s second goal, Orlando’s third of the match.

The movement leading up to Nani’s goal began with Waston getting caught too far forward when Orlando City possessed the ball. Call it tactical unawareness or tired legs, but the FCC midfield did not rotate to cover the back line. With Orlando City comfortably in possession, Ulloa, Alexander and Emmanual Ledesma all should have been tracking back into defensive positions. 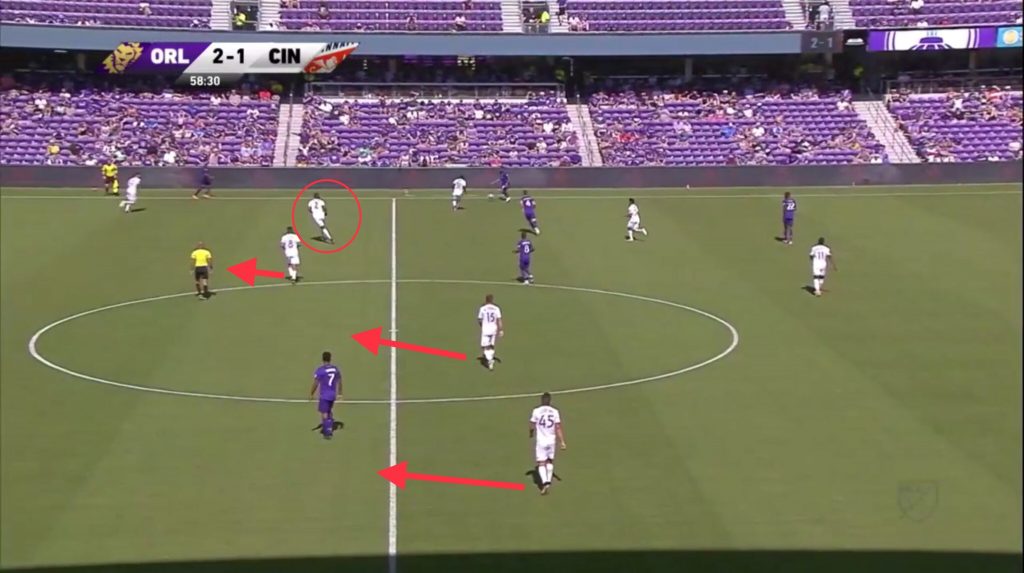 Without the proper rotation, the ball was easily played up the flank. Once Mathieu Deplagne went for the steal and missed badly, Waston was forced into a 1v1 situation with the speedy Ruan. In and of itself, this shouldn’t have doomed FC Cincinnati, as Waston excels at using his body and his pace to put faster players off of their runs to win the ball back. Maybe he was tentative after giving away the penalty, or maybe he was just too tired, but it looked like he had the opportunity to put Ruan off the ball early in the run and chose not to. 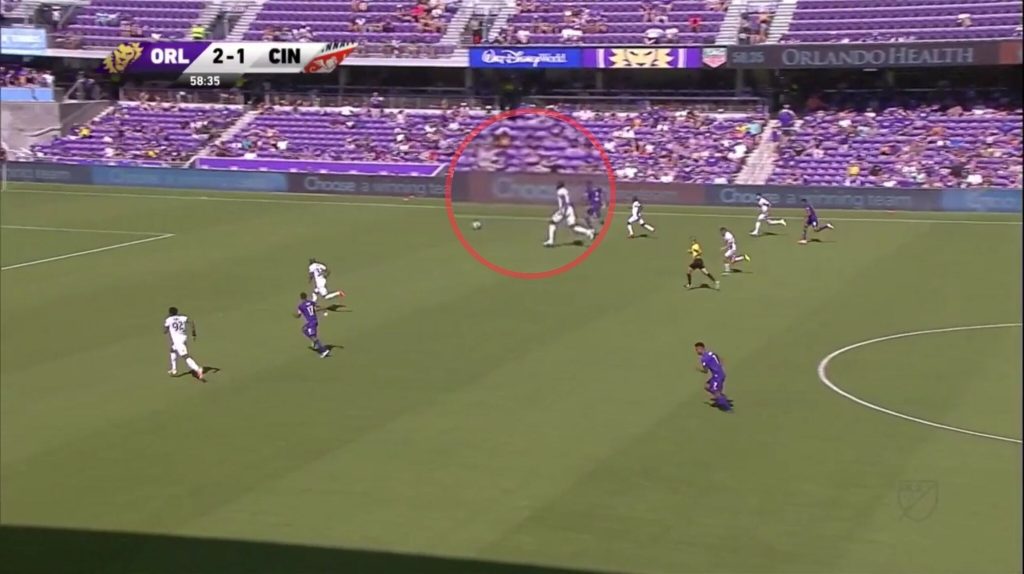 Then, after a simple hesitation, Ruan blazed past Waston and into the FCC box. From there, simply put, Hoyte and Alvas Powell decided to drop needlessly toward goal with little thought as to where the dangerous Orlando City players were.  Ledesma and Alexander were nowhere to be found. Nani slowed his run, allowing the FCC defenders to give him the space that he needed for the finish. 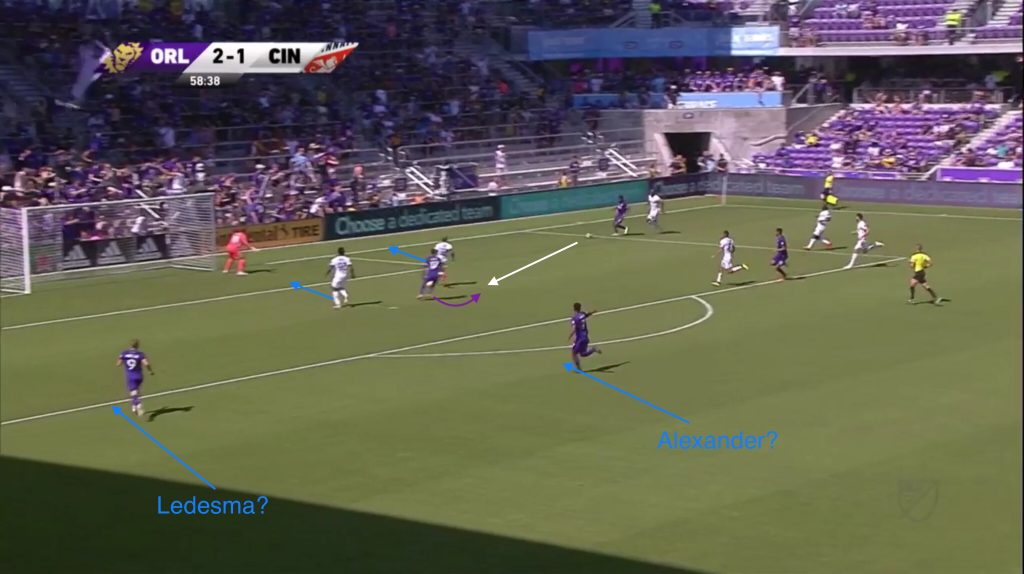 The fifth Orlando City goal was a brilliant near-post header by Dom Dwyer with Ulloa draped on his back. If you’re keeping track at home, that’s a needless penalty kick given away, an unlucky bounce on a corner kick, a brilliant near-post header, and two defensive lapses that gave Orlando City their five goals. Had Ledesma’s first-half crossbar rattler bounced in, his second-half chance that he dragged just wide been on target, or had Fanendo Adi been able to finish from close range when he found himself wide open in the Orlando City box, the conversation today may have been much different.

The sky isn’t falling. Damet and the FC Cincinnati team will be fine. FC Cincy entered the match injured and highly rotated. Couple that with the match being the first game the players had to deal with real heat and lingering movement issues still visible from before Damet took charge, and you have the recipe for an FCC defeat. Add in a bit of bad luck on both sides of the ball and a really poor decision from the normally steady Waston and you end up with a 5-1 drubbing. Either way, FC Cincinnati has more work to do and a long season in which to do it. Hopefully, there will be improvement heading into next week’s home match against the New York Red Bulls.