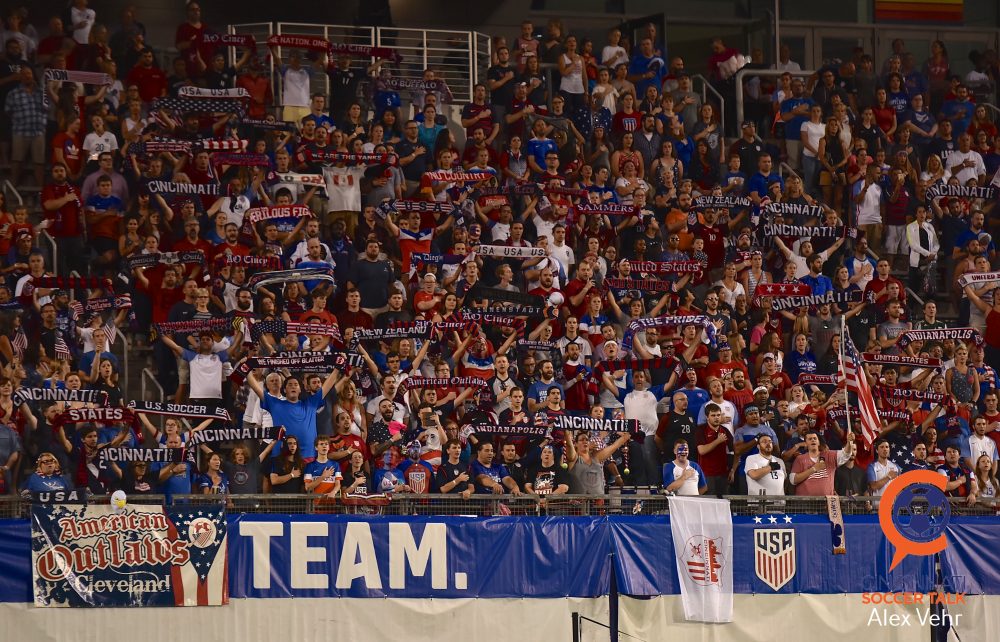 Although the men’s national team has never played a match in the Queen City, Berhalter got a glimpse of the soccer atmosphere in Nippert Stadium while managing the Columbus Crew

CINCINNATI – The United States men’s national team is playing in Cincinnati for the first time on June 9th and will do so at a pivotal time for US soccer.

The match vs. Venezuela is the final tune-up before the final roster is set for the 2019 CONCACAF Gold Cup as head coach Gregg Berhalter begins laying the foundation for the club’s future in the wake of failing to qualify for the last World Cup.

“We have embraced this failure just as we have embraced the good times in US soccer,” said Berhalter during a conference call with Cincinnati media on Thursday. “It is something we have discussed with the players. What it has done is given us fuel.”

More than 19,000 tickets already have been sold for the match which will be broadcast nationally on FOX. Although the men’s national team has never played a match in the Queen City, Berhalter got a glimpse of the soccer atmosphere in Nippert Stadium while managing the Columbus Crew against FC Cincinnati in the US Open Cup in 2017.

“I’m still mad that we lost,” Berhalter said, of the 1-0 defeat. “That was a perfect example of what derbies are about. It was one of the better atmospheres I’ve been a part of. The opportunity to bring the national team to a great soccer market like Cincinnati, we’re excited that there are already over 19,000 tickets sold. We’re looking forward to a great atmosphere.”

The men’s national team is seeking its record-tying seventh Gold Cup title and will open group play on June 18 against Guyana at Allianz Field in St. Paul, Minn. This is the sixth all-time meeting with Venezuela with the US owning a 3-0-2 mark. In the most recent meeting, Christian Pulisic scored and Tim Howard earned Budweiser Man of the Match in a 1-1 draw on June 3, 2017, in Sandy, Utah.

During Thursday’s conference call, Berhalter tried to ease concerns over the US National Soccer Team Players Association’s initial refusal to play on temporary sod placed on top of the synthetic turf at Nippert, citing injury and performance concerns. Installation of the temporary surface at Nippert begins on June 2.

“One of the concerns for the players is you want to play on a good surface,” Berhalter said. “The better the surface, the better the ball rolls. Again, it’s can we get this field up to a standard that’s acceptable, and I believe we can. I haven’t spoken to the players specifically about it. But they have every right to be concerned about a good playing surface.”

Berhalter was asked on Thursday about FC Cincinnati defender Greg Garza and his possible inclusion in the US roster. A quad injury forced Garza to leave US camp early and injuries have limited him to only six games this season for FCC.

“Greg is a guy we are very high on,” Berhalter said. “Unfortunately, at camp, he had an injury. When he’s on the field, he performs well. Last week was a good example. He’s a guy that’s on our radar. We hope he gets back to full fitness.”

The USMNT training camp roster was due on Thursday and will be announced by Concacaf on Monday. Training begins on May 22 in Washington. The roster begins with 40 players before being paired down to the final 23-man roster on June 5, the day the team travels to Cincinnati. The final roster will be announced June 6, and the team will train here June 7 and 8.

“I’ve seen how the players have been extremely focused in camp and I’ve seen how the mindset is to not take things for granted,” Berhalter said. “Part of this journey is to reflect on the past and seeing how we can improve and then going out and doing it. The guys have done a great job of working through that. We feel the whole nation is behind the team.”