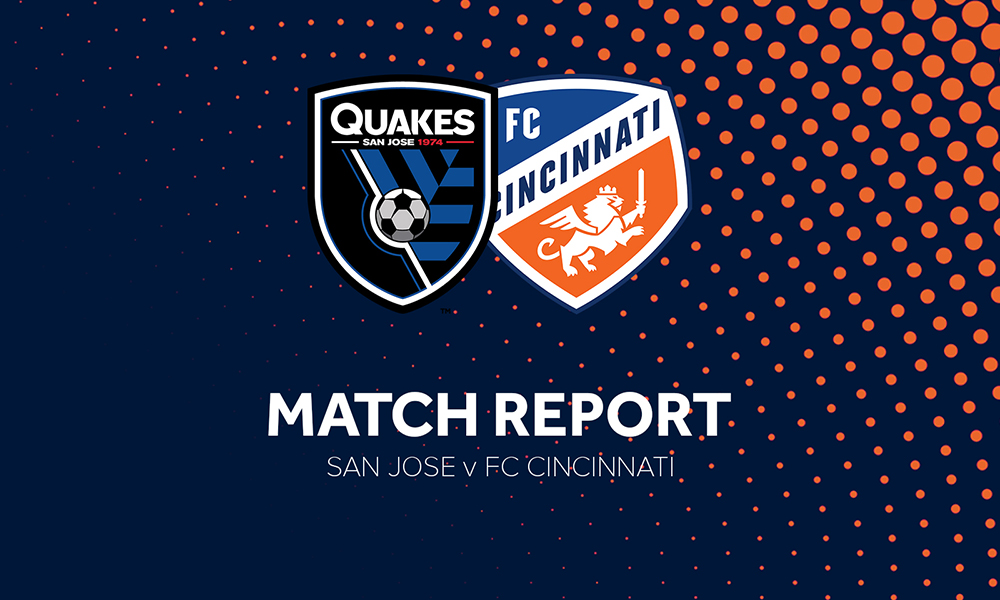 FC Cincinnati’s losing streak extended to five matches with a 1-0 loss against the San Jose Earthquakes late Saturday night at Avaya Stadium. A lone goal by San Jose’s Nick Lima in the 22nd-minute was enough to send FC Cincinnati back home with no points during this three-game road trip. FCC’s scoreless drought now extends to 501 minutes and 655 minutes without a goal in open play.

Common to most matches during FC Cincinnati’s seven-match winless streak, FCC hardly possessed the ball for the first 20 minutes. This domination in possession allowed San Jose to build upon opportunities and use this momentum to its advantage. In the 22nd-minute, a corner played short by the Earthquakes led to a strike by Lima outside of the box, where he buried a shot into the bottom left corner of the net. San Jose continued to press forward and almost netted a second goal just two minutes later, but the shot by Earthquakes forward Shea Salinas was just off-frame.

For most of the first half, the Orange and Blue had zero build up offensively, as scoring opportunities were far and few between. FC Cincinnati’s best chance in the first half came in the 39th-minute when Kenny Saief crossed a ball in the box to Mathieu Deplagne, but he was unable to connect.

While FC Cincinnati was offensively challenged in the first half, it came out composed to start the second half. In the 51st-minute FCC received a break after Cristian Espinoza was sent off after receiving his second yellow card of the match for pulling back Deplagne just outside the box. With San Jose down to 10 players on the pitch, if there was ever a time for FC Cincinnati to score a goal to end the drought, this was it.

FC Cincinnati quickly looked for the equalizer, with the ensuing free kick from the Espinoza foul deflecting out for an FCC corner. Saief launched the corner kick right into the middle of the box, but it was promptly caught by San Jose Keeper Daniel Vega. Other notable attempts in the second half included a header by Fatai Alashe in the 75th-minute, but it was punched away beautifully by Vega, and a strike by Fanendo Adi in the 80th-minute that went just over the bar.

Even with a man advantage for most of the second half, FC Cincinnati could not find the back of the net and fell to the San Jose Earthquakes 1-0.

Let’s try to stay positive, shall we? There is no doubt that the man of the match for FC Cincinnati was the 18 year-old midfielder Frankie Amaya. Making his first MLS start of his career in his native state of California, Amaya looked comfortable on the field and proved that he could contribute to the team. It will be interesting to see how much playing time he receives in the near future, as his development is important to long-term success of the club.

After tonight, Spencer Richey should be named the starting goalkeeper for FC Cincinnati. While Przemyslaw Tyton did not see a lot of action tonight, especially in the second half, he did not look comfortable in net and was caught in poor position a few times during the course of the match. Throughout the season, Richey’s play on the field has deemed himself worthy of the starting goalkeeper position until he shows otherwise. With the planned rotation of alternating keepers during the three-match roadtrip complete, Alan Koch has no reason not to name Richey the starting keeper.