In our weekly tactics feature, we look at how San Jose scored on Saturday and problems dealing with FC Cincinnati’s attack.

Without casting blame, I do feel that there are some obvious lack of ideas amongst the squad that need to be addressed. First, let’s look at the basic defensive breakdown that allowed the one goal that FCC conceded on the night.

All 10 outfield players were back to defend the San Jose corner when the goal was conceded. FCC employs a three-man zonal system when defending corners. Forrest Lasso and Kendall Waston positioned themselves along the 6 yard box, Kenny Saief stayed along the top of the box with an eye on late runners, and the other eight FCC players marked man-to-man. Most teams have a player or two that are not marking on corners, so this is not unusual. If these players are not playing a true zone they are often positioned on one of the goal posts or along the top of the box.

Whether marking full man-to-man, defending in a zone, or using a hybrid system, it is universally understood that teams need a plan in the case of a short corner. Two defenders must go out to defend the corner as there are two attackers present. The image below shows how FCC handled, or attempted to handle, this particular short corner. With 10 FCC defenders and only eight San Jose attackers, all players should have been easily accounted for. When the corner was played short, Saief abdicated his zone a bit late and couldn’t close down San Jose’s Magnus Eriksson before he played the ball into the area that Saief previously occupied,  finding a wide open Nick Lima. 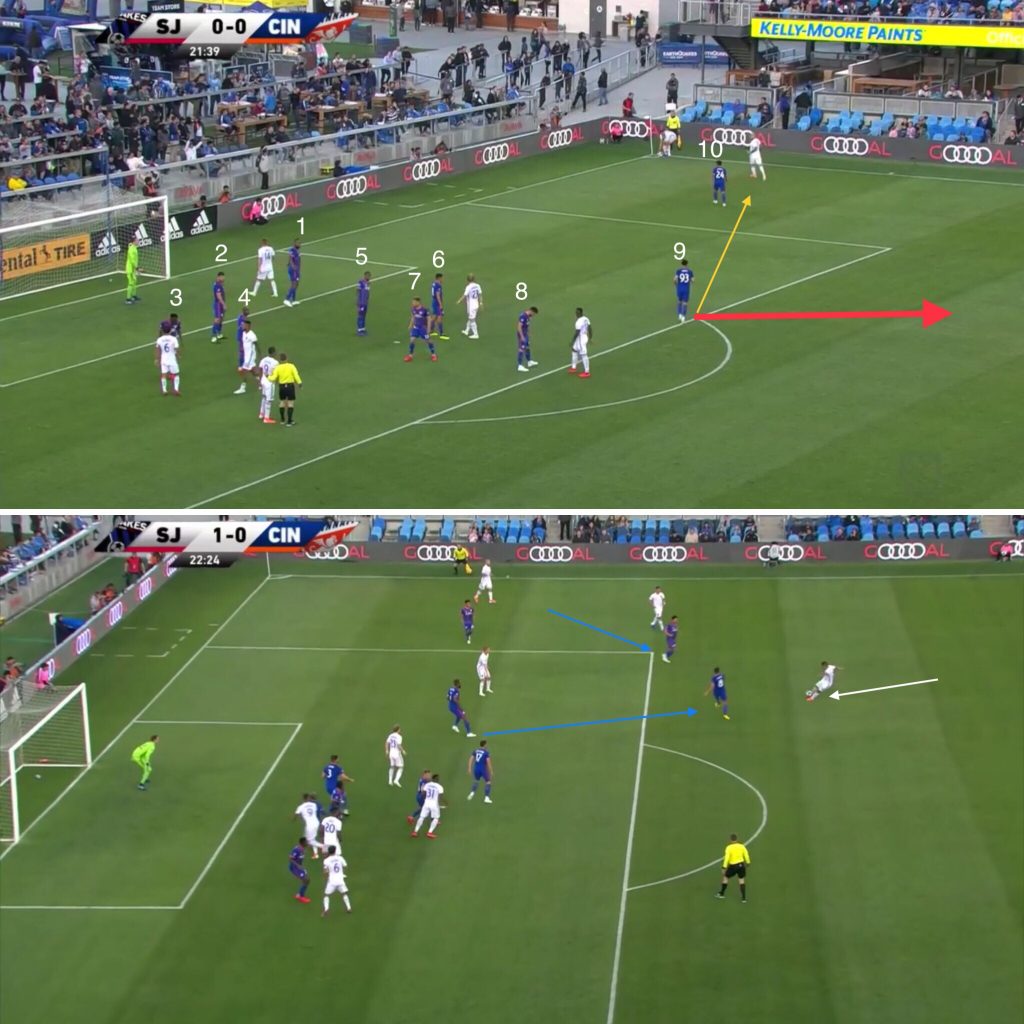 Either there was no plan for FCC in defending short corners, or the plan wasn’t executed. Was Saief just too slow to react? Was one of the FCC man-markers supposed to rotate out to the top of the box in Saief’s place while Waston or Lasso assumed his mark? Only the FCC players and staff know the answer, but regardless there was a missed assignment leading up to this goal.

What Else is Wrong with the FCC Attack?

There have been lots of articles and points of discussion, some here in this column, about what is wrong with the FCC attack. Pundits and fans alike have commented that it seems like the orange and blue don’t have an identity or an idea of how to go forward. Again, whether they are working on attacking moves in training and the players just aren’t executing, or the coaching staff is just hoping the players can figure it out, the FCC attack is so often devoid of any dynamic movement that can create passing lanes and confuse defenders. Contrasting the move that led to the San Jose red card with some of the other attacking moves in the game illustrates this perfectly. 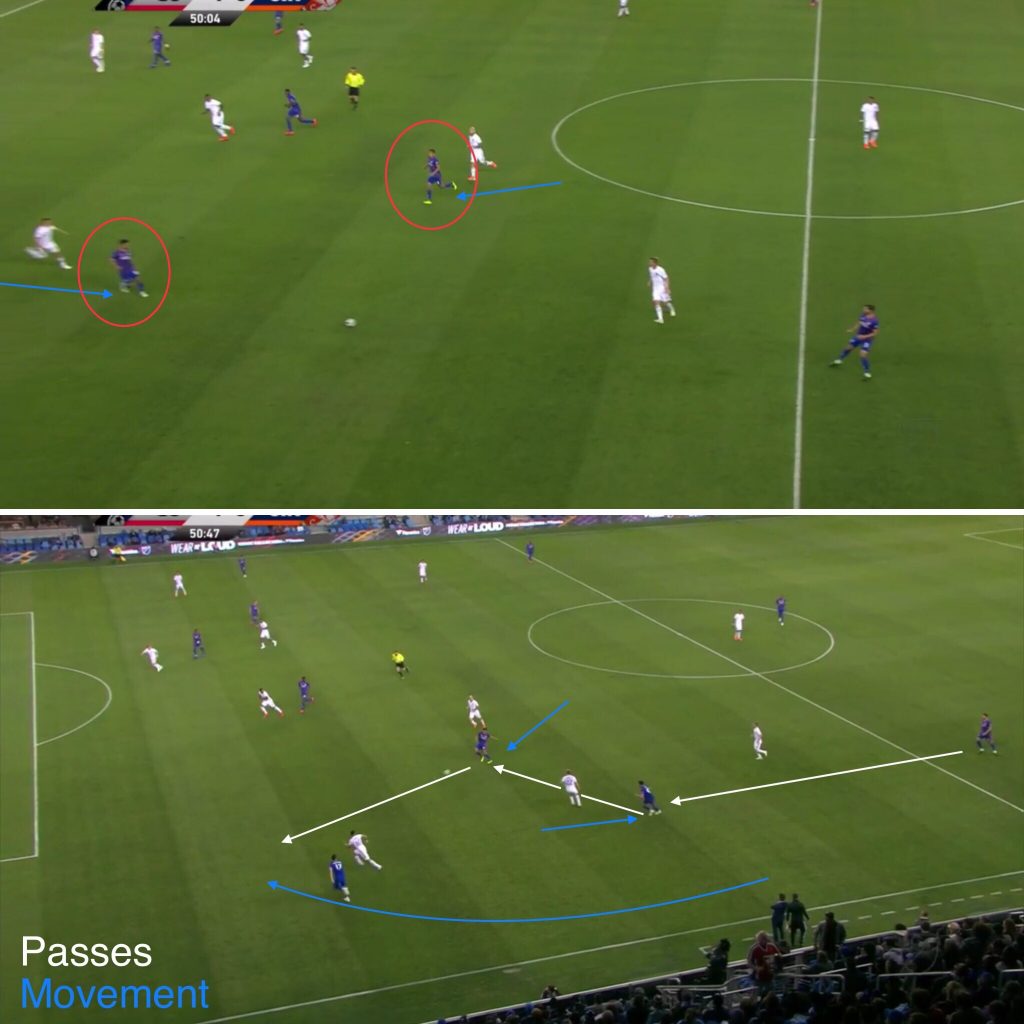 The image above shows the four-player combination that put Mathieu Deplagne in behind the Earthquakes defensive line, causing Christian Espinoza to pull back Deplagne and be disqualified from the match. The move was quick and decisive, with a line-splitting pass from Lasso followed by one touch passes by both Saief and Victor Ulloa into the streaking Deplagne.

What made this move work was the quick and hard movements off the ball by Ulloa and Saief. Saief checked back to Lasso freeing himself up for the pass. At the  same instance Ulloa darted in front of San Jose’s Eriksson to give Saief the simple layoff option. Recognizing this movement in front of him, Deplagne made his early run and was already open by the time Ulloa was receiving Saief’s layoff.

Contrast that with this 74th minute half-chance created by Deplagne and Emmanuel Ledesma. 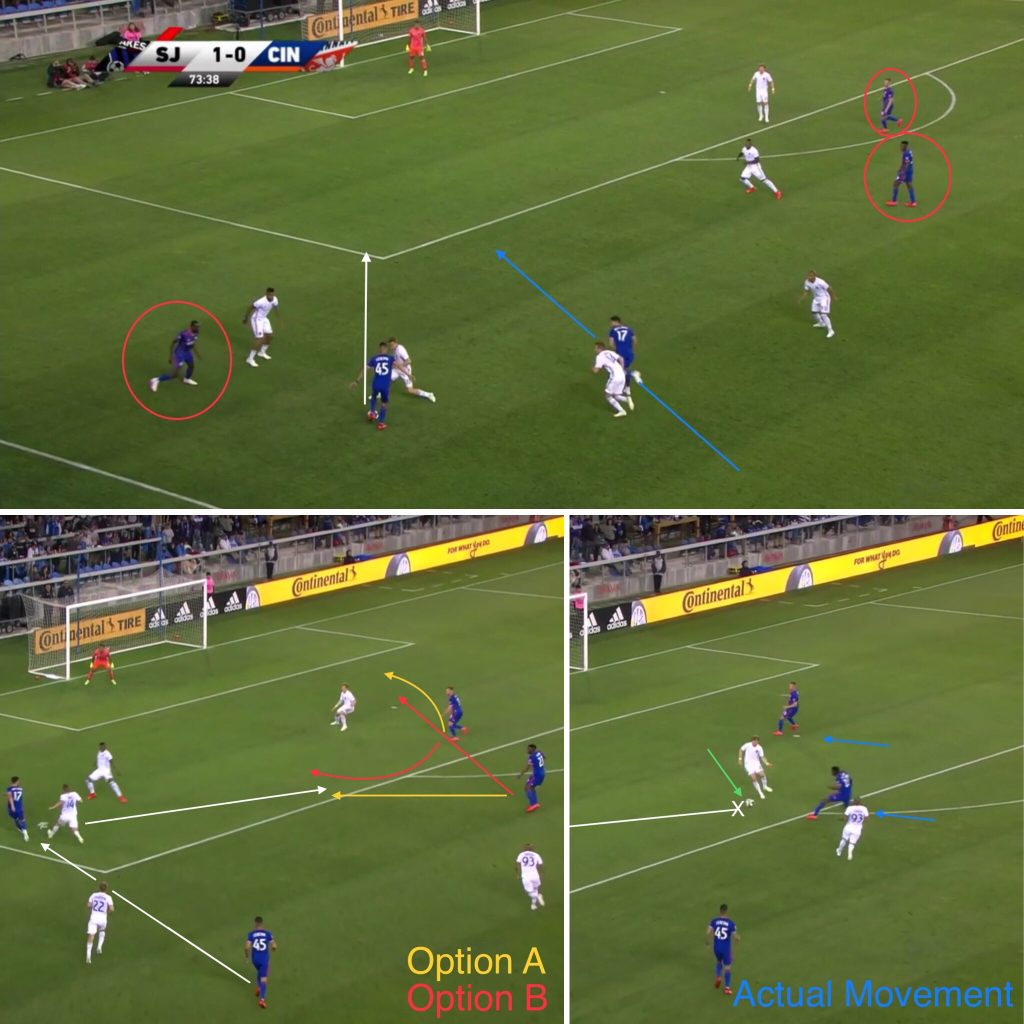 The move began well, with Ledesma facing up his defender and finding the hard-charging Deplagne with a clever pass through the defender’s legs. However, Deplagne’s cutback was easily intercepted by the Earthquakes center back. Where there were three players all making decisive movements in the prior move, here Caleb Stanko and Fatai Alashe were all rooted to their spots. Had they made a decisive but straight run (Option A), they would have almost certainly created a better option for Deplagne. Had they done what most attackers in the box are coached to do, and made a quick crossing run, who knows what kind of space they may have created?

There were many moments in the match where the FC Cincinnati attackers stood and waited for the man with the ball to make something happen. The move depicted below, though it resulted in the best chance for FCC on the night, was no different. Alashe ended up getting his header on target, but because he was tracking backwards to do it he couldn’t generate the accuracy or power to beat Daniel Vega. A few quick crossing runs is the basic mode taught by coaches to create space to finish from these types of crosses. 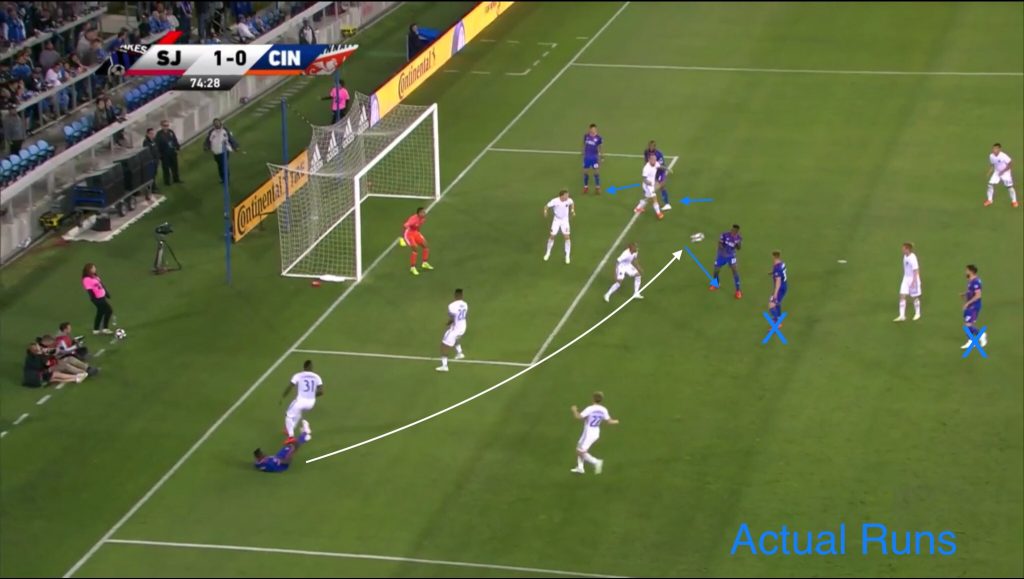 Koch may want better players and may already coach the players he has to make these kinds of off the ball runs. However, moving off the ball doesn’t take talent, it just takes effort and an idea of where to go. Whether things change with the addition of new players or a new coach, we may never know who is truly to blame for the lack of ideas in attack. But, changing one of these variables may give us a pretty good idea.