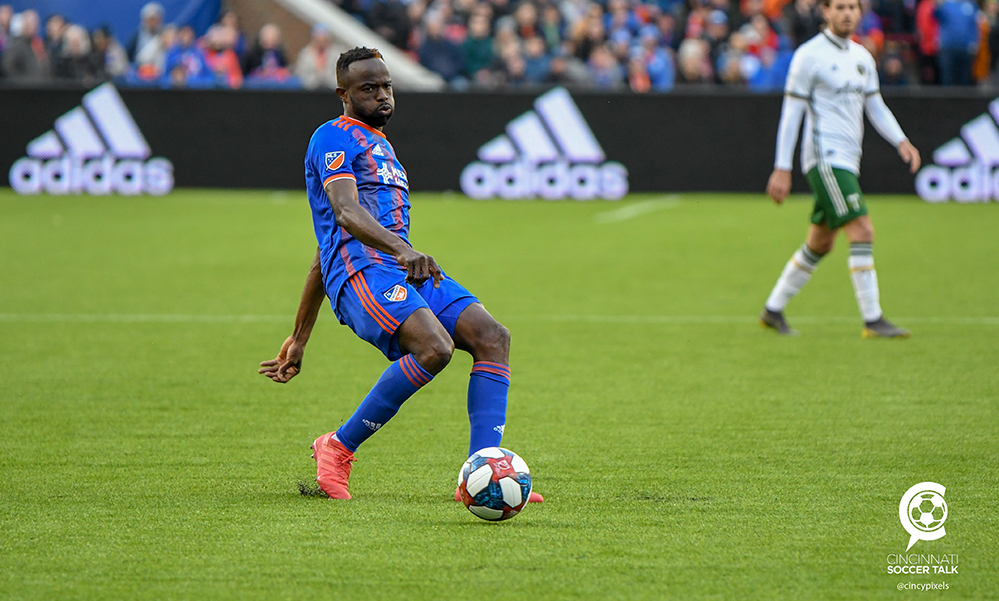 In their first matchup since the 2017 U.S. Open Cup semi-finals, FC Cincinnati fell to the New York Red Bulls 1-0 behind a Connor Lade goal Saturday. Here are our player ratings for the match.

In their first matchup since the 2017 U.S. Open Cup semi-finals, FC Cincinnati fell to the New York Red Bulls 1-0 behind a Connor Lade goal Saturday night. FC Cincinnati nearly pulled even in the second half but was denied three times by the woodwork.

Titi was solid in goal for FC Cincinnati but didn’t have much to do on the night. He conceded a goal to Connor Lade on the only shot he faced but it was a rocket that he couldn’t do much about. He was able to utilize his size to come off his line to command the box and took a couple of knocks because of it.

FC Cincinnati struggled all night on the right, and it was no different from Deplagne. Kenny Saief and Deplagne couldn’t get much going together, and Deplagne was 11 of 24 in passing in the middle and attacking thirds. To be fair, I’m not going to take too much from this performance. The Frenchman has been extremely valuable to coach Alan Koch on both sides of the back line. He’s been solid on defense, and with as many partnerships he’s had, it’s not a shock that he has been inconsistent getting forward.

Hagglund had a quiet night but was nearly burned by Daniel Royer in the 24th minute. The center back was caught ball watching, allowing Royer to streak behind him alone on net. Yes, it was an amazing chip by Amro Tarek, but Hagglund needs to be aware and keep his awareness on the attackers around him.

Capi had another solid night and was assertive in the air to win balls. Tough to ask much more from him. Waston had three blocks in the box and was 10 of 11 in aerial duels. He tried to make a difference late and had a critical chance to draw the match on an open header in the 90th, but it hit off the crossbar.

Mixed bag for Hoyte in the Big Apple. Three of eight passing in his third is unacceptable, and he needs to be more careful with the ball. He did have three blocks in the box to make up for his distribution in his half. He partnered well with Roland Lamah up on the left side and tried to get forward into attack. I wouldn’t mind seeing Hoyte get extended time at left back to allow his partnership with Lamah to develop.

Ulloa had a workmen’s night in the orange & blue on both sides of the ball. He was solid with his passing (45-56, 80.4%), but his work on the defensive side was most impressive. He had three tackles, three blocked shots and six interceptions on the night. I’d like to see him follow up at the top of the box when we are on the break, but I can understand on the road keeping a deeper position.

FC Cincinnati had a rough first half holding on to the ball, and I place a portion of the blame on Bertone. It seemed his first reaction in close one-on-one situations in his half was to clear the ball, which resulted in turnovers. He can rip a shot and nearly scored, but we need more especially in the attacking half from the midfielder.

Lamah is one of the few players for FC Cincinnati comfortable on the ball in tight spaces and capable of possession. In the second half, he tried to cut in centrally to some success. He had a great one-on-one with Luis Robles in the 71st, but his shot glanced just wide off the woodwork.

It was a night where Manneh let too many opportunities through his grasp. For example in the 22nd minute, he was on the receiving end of a one-two at the top of the box but he hit his shot into the heavens. When FC Cincinnati has limited attacking chances especially in the first half, he needs to do a better job holding on to the ball and not turning it over in the attacking half.

Saief was given the start on the RW after appearing centrally for the majority of the season, but the switch proved ineffective as he was not involved on the night. A -178 Audi Index score is probably correct, as he was isolated and unable to connect with his teammates. Maybe this was a move to keep him fresh during this busy schedule, but I prefer him centrally so he gets chances on the ball.

The Argentine attacker received his second start of the season after being cleared to play. Ledesma was starved for service for the night and was largely ineffective. He had a chance in the 48th minute in the NYRB box, but with little support, he was unable to get a shot off.

Made an early impact on the game and should’ve squared the match in the 64th minute. He made a nice move to round Robles, but his tight angle shot glanced off the near post.

Just not sure of the point in Allan Cruz on the wing anymore. He isn’t a winger, and he provides little going forward. I like Cruz, but with Bertone struggling in the middle, give the young DP a chance.

Powell came in as a late sub for Hoyte to get into the attacking half.

FC Cincinnati’s lone goal in the month of April came from a Darren Mattocks penalty. Yes FC Cincinnati hit the woodwork three times on the evening, but each of the three was a result of a fumble or misplay by the Red Bulls. The Orange & Blue have run out of ideas getting into the attack. They almost left New York with a point due to their defensive organization, but it is hard to get three points when you don’t score. Fanendo Adi is expected to return Wednesday, and his return can’t come soon enough. FC Cincinnati has fallen to 11th in the Eastern Conference as they face second-place Philadelphia on the road Wednesday night.