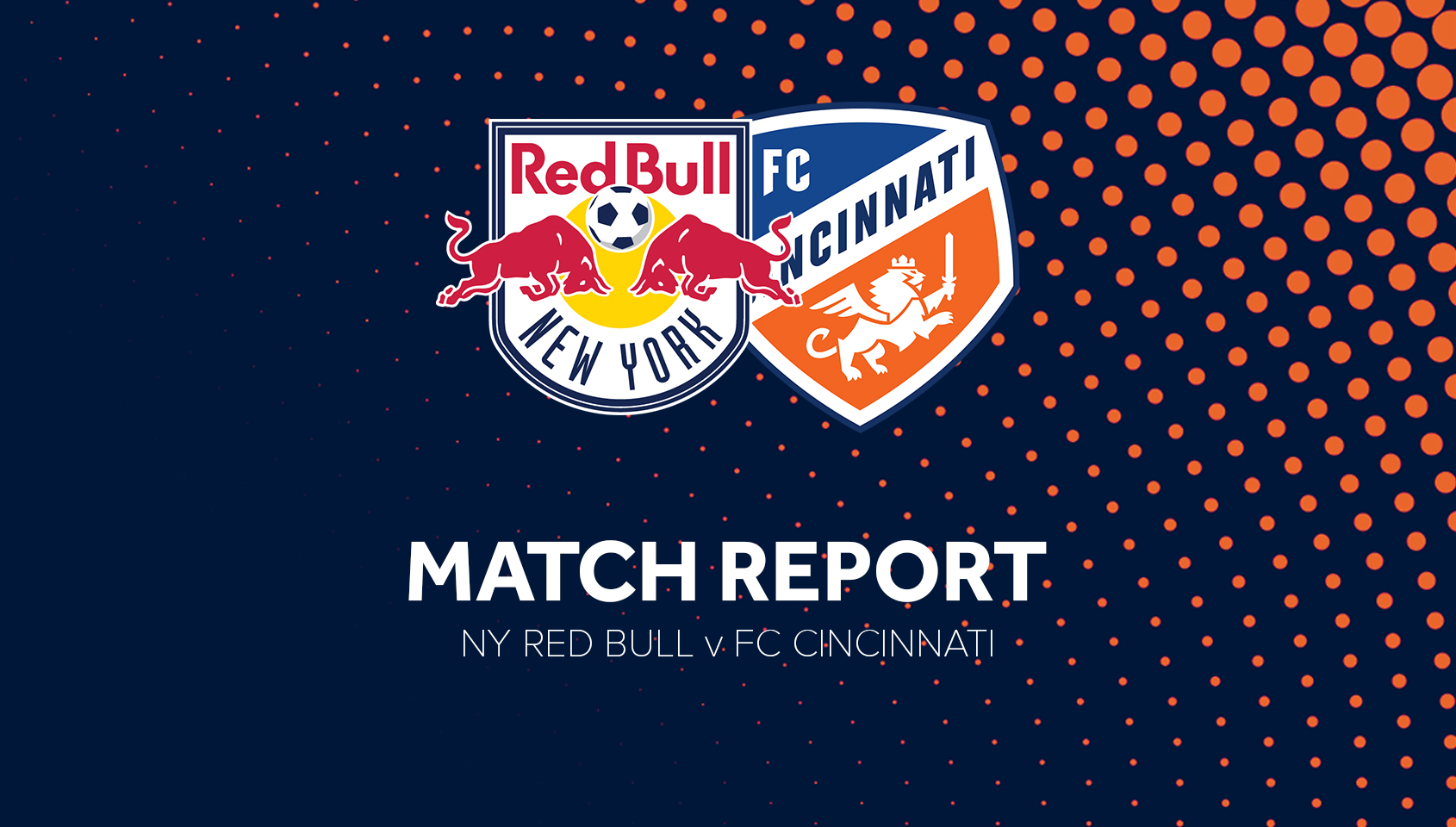 FC Cincinnati continued its winless streak to five matches with a 1-0 loss Saturday to the New York Red Bulls at Red Bull Arena in Harrison, New Jersey. It matches the franchise record for consecutive winless matches, first set by the 2017 USL squad.

Similar to most of the matches, FCC didn’t start out well. New York controlled the possession from the beginning quite handily, but it didn’t necessarily get a good look. The Red Bulls easily passed around the FCC defense. This was what the first few minutes were like. FCC didn’t even seem to touch the ball for the first three minutes.

Roland Lamah ended up with a decent look in the early going after the first three minutes, but for the first 10 minutes, it was all New York. The only passing that was going on for FCC was trying to clear the ball from the back, and those were all going straight to the Red Bulls back line.

FCC started to get its attack working at around the 10th minute. Their passing got much better, and it was actually able to transition from the midfield to the offensive side of the pitch with ease. This point was good for the team and was one of the best points of the match for the offense.

However, that didn’t mean the Red Bulls were out of it. After the small bit of percentage FCC got, the Red Bulls came out in full force in possession. They were laying siege to the FCC goal and saw a decent amount of chances to get the ball near the goal. Nothing came of those attacks though, which saw a lot of good work from Kendall Waston and Justin Hoyte.

FCC then started to dominate the game starting in the 30th minute. It had most of the possession and actually had chances. There was one in particular where Emmanuel Ledesma would have had a goal if he could have just got a touch on it.

Unfortunately, all that work was for naught, as New York went up 1-0 from an amazing goal from Connor Lade. It started out from transition, and then a Red Bulls player backheeled which allowed Lade to shoot. You can see it below.

The rest of the half wasn’t much better, as New York had a field day in the FCC final third. It didn’t get any amazing looks but was able to pass around the FCC defense.

The second half began pretty well. FC Cincinnati attacked with pace and got some good looks. There was one in particular that stuck out. There were players in transition, and Leonardo Bertone had the ball on the far left side. He played it sideways to Kenny Saief in the middle and was away if it was a good ball.

The next 15 minutes or so saw New York control the match, but it also started to get a bit chippy. There were three cards between the 50th and 65th minutes, two from FCC and one from RB.

Then, FCC looked like it had one. Darren Mattocks was all alone against Red Bulls goalkeeper Luis Robles. He dribbled to Robles’ left, and Robles let him go way wide before diving. Mattocks then shot it, but it hit the post and bounced to the other side of the box, where there was a Red Bulls defender to clear the ball. It was a great job by Robles to force him wide, but an experienced striker like Mattocks should have put that one in the back of the net.

The post wasn’t done, however. In the 71st minute, thanks to a bad header from the Red Bulls, Lamah got the ball inside the box with space to shoot. He dribbled and lined it up and shot it, just to have it hit the same post that Mattocks hit.

FCC continued the good run of attack for the next 10 minutes. It was good stuff from the team, and they had some good looks. Kekuta Manneh had a shot outside the box that required Robles to make a diving save in the 79th minute. It wasn’t hit with blazing pace, but it was a good look worth the hit.

The final 15 minutes of the match was all FCC. New York was sitting back and allowing FCC to give it its best shot to get a ball into the net. Unfortunately for FCC, the Red Bulls were up to the challenge and so was the post, and the match ended with a 1-0 loss.

FCC’s scoreless drought extends to 321 minutes and 475 minutes without a goal from open play. That is obviously terrible, and it is playing teams who have let goals in. Other than Los Angeles FC and Seattle, FCC isn’t playing the top of the league.

FCC was attacking with some ideas and creativity. However, the players expected to be the stars continue to underperform. Saief had another underwhelming match, and I have to wonder if he is playing in the right spot on the pitch. Bertone also continually hits the ball away from teammates and doesn’t seem as connected to them as he should be. The midfield needs to work together. It still feels like they’ve never played with each other, and we’re nine matches in.

This match also didn’t do anything to stop the worrying about the team’s defending. Teams can’t defend for 90 straight minutes and expect to stay in the match. Due to the offense’s inadequacy, the defense gets worse. But I’m not going to say the defense it without criticism either. It doesn’t step quick enough, which allowed Lade to get his shot off.