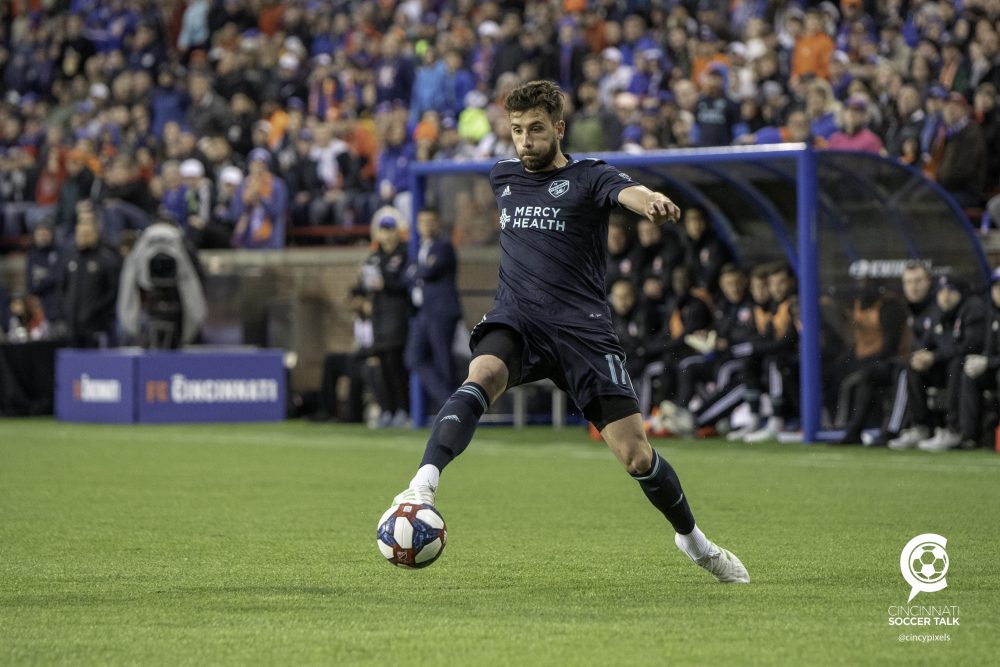 Here are our weekly player ratings after Real Salt Lake stunned FC Cincinnati on Friday with a 3-0 victory over the Orange and Blue at Nippert Stadium.

Real Salt Lake came into Nippert Stadium Friday night and stunned FC Cincinnati 3-0. Albert Rusnak scored a brace, and Sam Johnson added a goal. In addition to our Match Report, we will recap each individual player performance for the match.

It was a hard-luck night for Richey, as both goals conceded in open play came off rebounds. The only real fault came in the first goal where he deflected the ball straight to the top of the box, leaving a relatively easy shot for Rusnak. Richey made a couple of nice stops before the second goal was conceded and he could feel hard done by his defense failing him up front. Rusnak got his brace in the second half off a penalty where he sent Richey the other way. A tough result for the young keeper, but there really wasn’t much else you could ask from him.

Making his first start since week three, Powell was a mixed bag. He showed several moments of promise, but at times he left you scratching your head. I lay the second goal at his feet when he took a terrible angle on Corey Baird. If he takes a better route, he’s able to either intercept the pass of force Baird wide out of trouble. In the second half, Powell overlapped offensively several times and showed his quality. If he can get his defensive responsibilities sorted out, you have to like what he can contribute when Fanendo Adi returns.

Hagglund, along with Kendall Waston, did a nice job to keep Sam Johnson quiet for most of the night. Hagglund was a beast in the air, winning 11 of 14 aerial duels, eight of which were on the defensive side of the ball. There isn’t a lot to take away negatively for Hagglund. You’d like to have seen emergency clearances on the two goals but you can’t really chalk much up to him.

Like Hagglund, there isn’t a lot to take issue with from Waston’s play. He did a nice job moving the ball side to side in possession especially in the first half. Waston was caught on the goal line for both open play goals, but you can’t chalk them up to his play.

Deplagne conceded the penalty kick that resulted in the third goal for RSL. The left back dove in on a tackle past a streaking Rusnak and ended up bringing the midfielder down in the box. If you are going to go down in the box like that, you have to win the ball.

Victor Ulloa was back into the starting lineup Friday after starting last week on the bench. The best thing I can say is that he was solid but far from dynamic. The Ulloa-Leonardo Bertone partnership keeps growing on the defensive side of the ball, but the midfield leaves a lot to be desired going forward.

If you looked at the stats, you’d see Leonardo Bertone had an 81% passing percentage, which is solid, but if you looked at his passing chart you’d see a lot to be desired. Bertone was great side to side, but anytime he tried to pick a pass going forward it was intercepted. Not to put it all on Bertone, but if FC Cincinnati is going to be successful, it needs to start completing these passes into the attacking third to give Kenny Saief and Darren Mattocks something to create off of.

The Belgian had a solid start to the match after coming off the bench last week. Lamah was active off the ball early with four or five dangerous runs behind the RSL backline. Unfortunately, his teammates either missed the run or delivered the ball a second or two late. He delivered a great ball to Allan Cruz in the 25th minute that went just wide.

Outside of his 25th minute header, Cruz was again silent for most of the night. He is just not getting on the ball enough with a minuscule 13 passes attempted on the night. I understand his job is to help provide defensive cover for Powell, but with FC Cincinnati’s offensive woes, it’s hard to see how long he can start without actively contributing to the attack.

Kenny Saief put in a lot of work but too often was the only player who looked a threat going forward. He was active in the build-up play, dropping into midfield to move the ball, but RSL did a great job knocking him off the ball and discouraging the midfielder on the night. If there is one thing I’d like to see, it’s him moving the ball a little faster. Too often he takes the extra dribble and allows defenders to collapse on him.

Mattocks had several dangerous chances last week, but they were few and far between on Friday. He needs the ball played to his feet, and RSL did a nice job dropping back to absorb pressure. Mattocks’ only goal this season came from the penalty spot, and the holdup role doesn’t suit him. He needs a teammate to work off him to create confusion between the two center backs.

The speedy midfielder came in and gave the Orange & Blue a spark. He has been struggling with injuries of late, so I wonder if it had a role in Manneh coming off the bench. He got off a couple of shots and could be a partner with Lamah and Saief once healthy.

I really like the promise of Stanko. Like Kevin McCloskey said on the broadcast, he reminds me a lot of Kyle Beckerman, providing a physical threat in midfield. I’d like to see if he could shore up the defense, providing FC Cincinnati more freedom going forward.

Alashe made his 2019 MLS debut and provided a couple of key passes late in the match.

If we are looking at things realistically, Alan Koch had four MLS caliber attacking players available to him (Mattocks, Saief, Lamah and Manneh). Between player availability and the defensive setup of RSL, FC Cincinnati didn’t have many clear cut chances all night. There are still many signs that the chemistry is developing with passes just a second or two off. If this hasn’t improved by June then I might attribute it to coaching. Now I’m siding with the players developing familiarity between each other. On Koch’s side, I want to look at a controversial sub in the second half with Stanko in for Mattocks. Many asked why would you bring in a CDM for a striker, but you have to keep things in perspective. Koch has one healthy forward and why should he risk Mattocks health late in the match when it is out of reach? He kept him healthy for next week and sends a signal to the front office that they need to support his cause by getting in some attacking help in the next week or two, if not the coming summer transfer window.