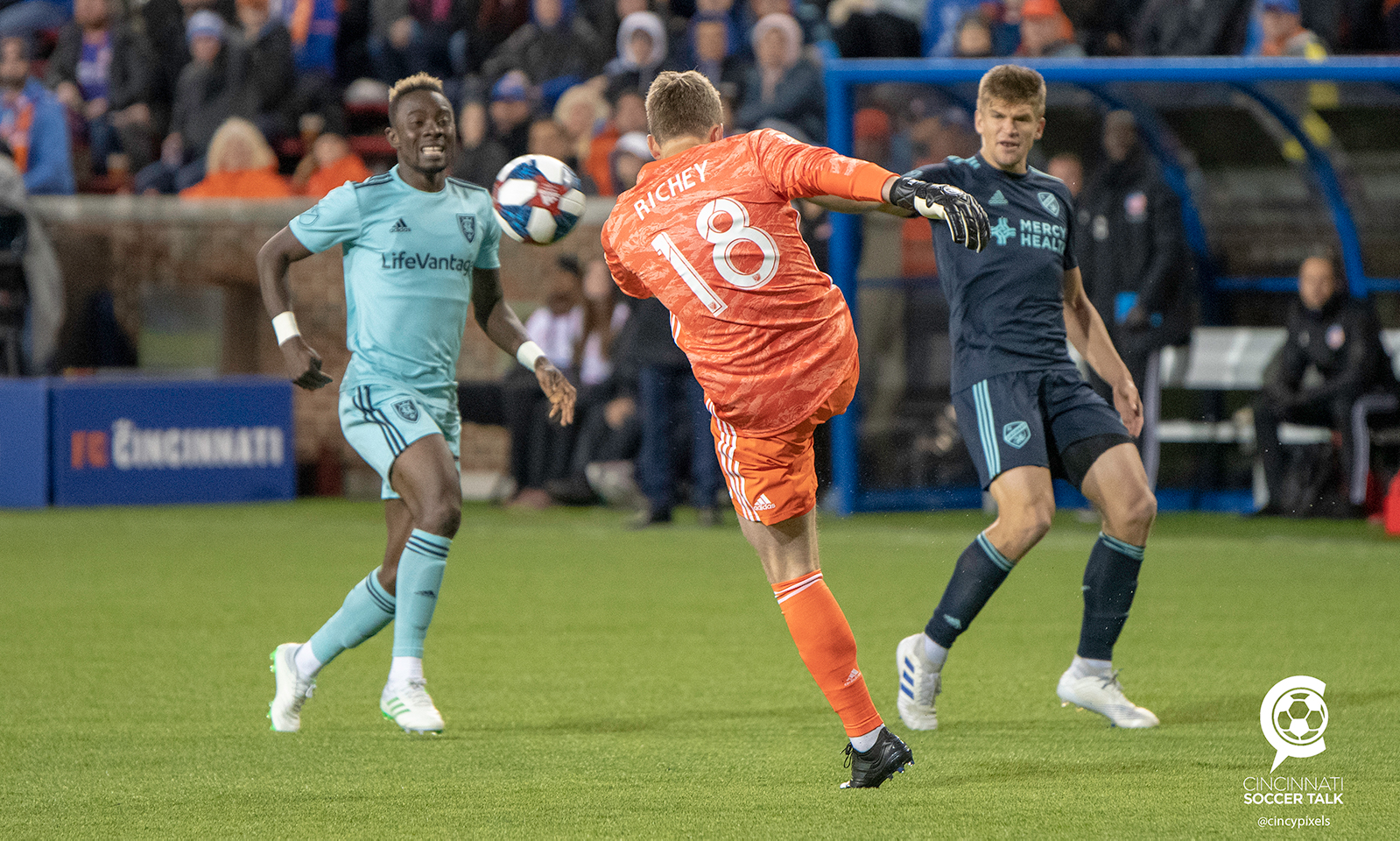 FC Cincinnati lost 3-0 Saturday at Nippert Stadium — the largest home defeat in franchise history — to Real Salt Lake in a match most expected FCC to win.

The match started out alright for FC Cincinnati. Neither team really got a good grip on the ball for the first 40 minutes of it. It was a lot of possession through that stint of the match, which FCC was able to win much of the time. It was able to move to the box a decent amount, but that was where it hit a wall. That wall, however, wasn’t the Real Salt Lake defense, it was the FCC attack. Multiple times throughout the match, a promising attack was ruined thanks to a poorly played ball.

FCC continued to attack and got a couple of good looks. It was looking like the better side going into the 40th minute. However, after an FCC attack, RSL countered and battered Spencer Richey, who couldn’t swat away the ball, which went to Albert Rusnak at the top of the penalty box to slot home the first goal of the match in the 42nd minute. This goal was full of bad plays from both the goalkeeper and the defenders. Richey had chances to save as well as punch it away instead of it hitting his chest. The defenders also had easy chances to clear the ball away. It was overall a bad goal conceded from every angle.

RSL wasn’t done scoring in the first half either. In the second minute of stoppage time, Sam Johnson scored to double the lead. This one as well had ample opportunities for the FCC defense to get this ball out. Overall, the FCC back line had a terrible match.

The second half did bring with it a lot of fast-paced play from FCC to begin. It had a few great looks to start the half and looked like it might come back into the match. The first five minutes of the second half was the best point for FCC. It looked dangerous and held possession too. The team was able to weave the ball through the RSL defense and get some good looks on goal.

However, all of that good work got thrown out the window in the 56th minute when a penalty kick was called for Real Salt Lake. Mathieu Deplagne went in for a tackle and didn’t get any of the ball. Rusnak went to take the penalty kick and hit it home to give RSL a three-goal lead.

The rest of the half, RSL controlled a lot of the match. The possession statistics ended up being 51-49 in favor of FCC, but RSL really came back in the last part of the match to get that close in possession. FCC didn’t make it difficult either, taking out striker Darren Mattocks for midfielder Caleb Stanko as well as taking out Victor Ulloa for Fatai Alashe in the 77th minute.

The match ended with a 3-0 scoreline in favor of Real Salt Lake, with Rusnak tallying a brace and Sam Johnson scoring the other.

Overall, the match was terrible in every facet of the game. Going from the back, the goalkeeping wasn’t great today. Richey still needs some work. The back line wasn’t good either. Alvas Powell showed why he wasn’t in the 18 for the most part of the season, Nick Hagglund and Kendall Waston were bad in transition and Deplagne gave a terrible penalty kick. The midfield was horrendous. The passing was way off, there weren’t any creative ideas and they just didn’t seem like they cared for most of the match. Lastly, the striker Mattocks also wasn’t great. Saief also appeared on the lineup as a striker, but he played in transition a bit as well. Mattocks didn’t touch much of the ball, and when he did, it seemed like it instantly bounced 5 yards away.

The next match for FCC is Saturday at the New York Red Bulls. The next home match is May 11 against the Montreal Impact.

The team has to work on their set pieces. FCC had, in total, 13 corner kicks, and only two of them were OK at best. The other 11 were terrible. Apparently, Alan Koch and the team worked on set pieces this past week, but you couldn’t tell. This is a major negative of the team because of its inability to score on open play, so it needs to capitalize on set pieces. However, that also isn’t happening, which is why the team hasn’t scored in a while. In fact, it has been 231 minutes since the last goal, the Mattocks penalty kick against Sporting KC. It has also been 385 minutes since FCC has scored in open play, the last goal being Saief’s 65th-minute goal against New England.

Lastly, the injuries and lack of depth seem to be really eating away at FCC. Saturday would have been a perfect match for Greg Garza and Emmanuel Ledesma to take over. Garza’s presence, or lack of presence, was definitely felt at the fullback position, and Ledesma’s corners would have given FCC at least better looks if not a goal. This will continue to be a problem as we get to Gold Cup time.