On this week’s Talking Tactics, Brad Gough breaks down the two crucial goals that FC Cincinnati conceded late in the first half against Real Salt Lake on Friday night.

Heading into the match against Real Salt Lake on Friday, FC Cincinnati supporters were looking for the team to make a statement. Winless in three games and without a goal from open play over that time, many expected FCC to come up with a statement win. So, what happened? 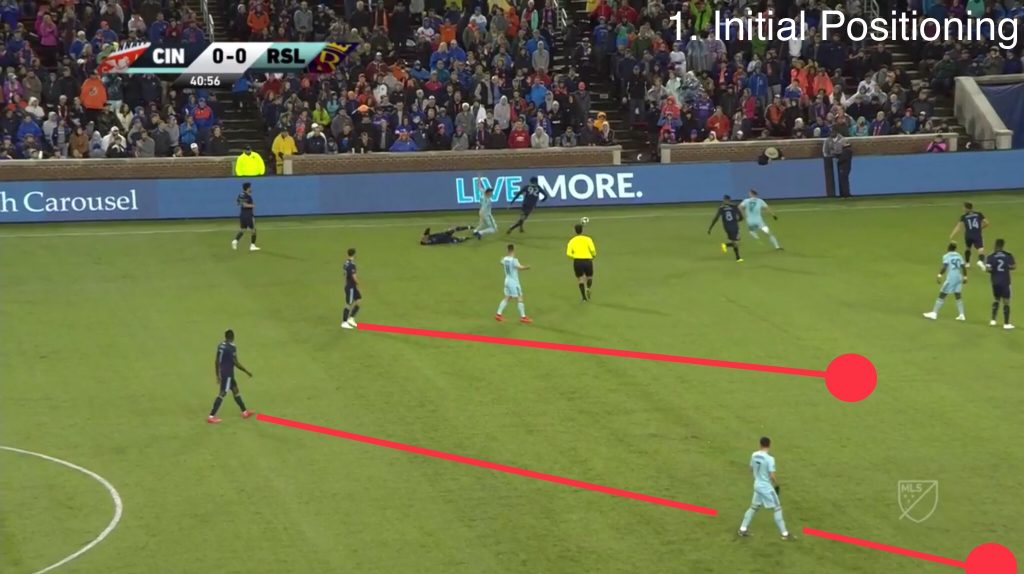 All of the goals that Real Salt Lake scored can be attributed heavily to individual errors. However, there were also some major positioning deficiencies as well. RSL’s first goal began when Alvas Powell and Victor Cruz were in a tussle with Damir Kreilach. During this scrap, Leonardo Bertone and Roland Lamah were looking on instead of tracking back into the proper defensive positioning on the chance that Kreilach came through with the ball. Powell actually won the ball, so crisis averted, right? 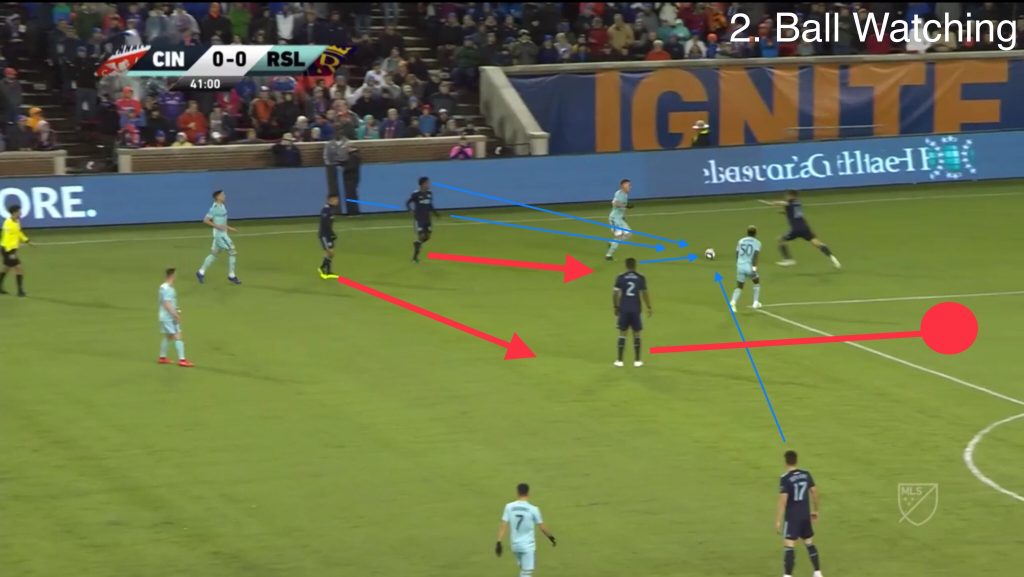 Wrong — after winning the ball Powell makes a careless back pass that leaves Nick Hagglund stretching into a 50-50 tackle. Once again, expecting Hagglund to win the ball, the FCC defenders go into ball watching mode. Kendall Waston fails to drop in behind his partner to provide cover, and both Victor Ulloa and Powell himself do not continue their recovery runs. 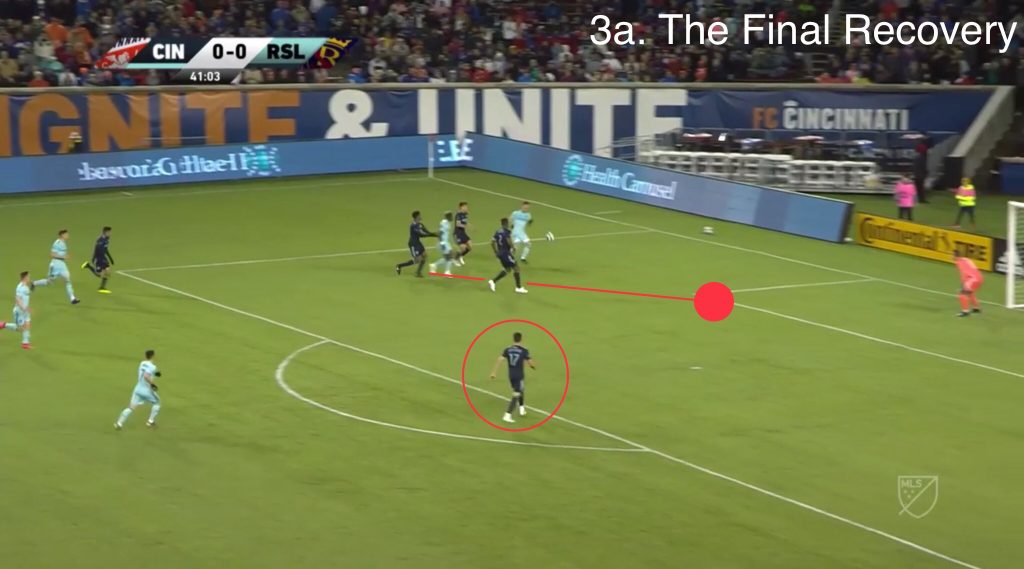 As it turns out, Hagglund did not win the ball. Instead, the ball took a deflection, and the RSL attacker was able to maintain possession. The FCC defense then went into panic mode with Powell, Hagglund, and Waston all trying to close down the ball. One of the defenders should have made a recovery run to the center of the box. Mathieu Deplagne continued to look on not concentrating on his task of picking up runners in the box. 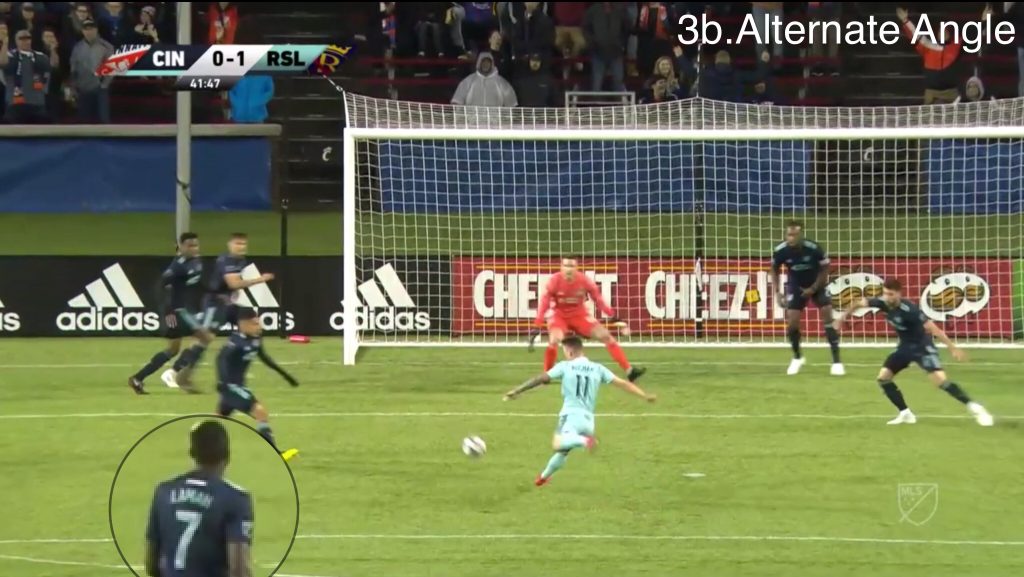 Seen here from an alternate view, the initial problem of ball watching by Bertone and Lamah brings to light the underlying cause of this defensive breakdown. As Albert Rusnak prepares himself for his game-winning volley, Lamah and Bertone look on from the middle third of the pitch. They never re-engaged with the play after Powell’s back pass and allowed the RSL attackers free rein of the FCC penalty box. 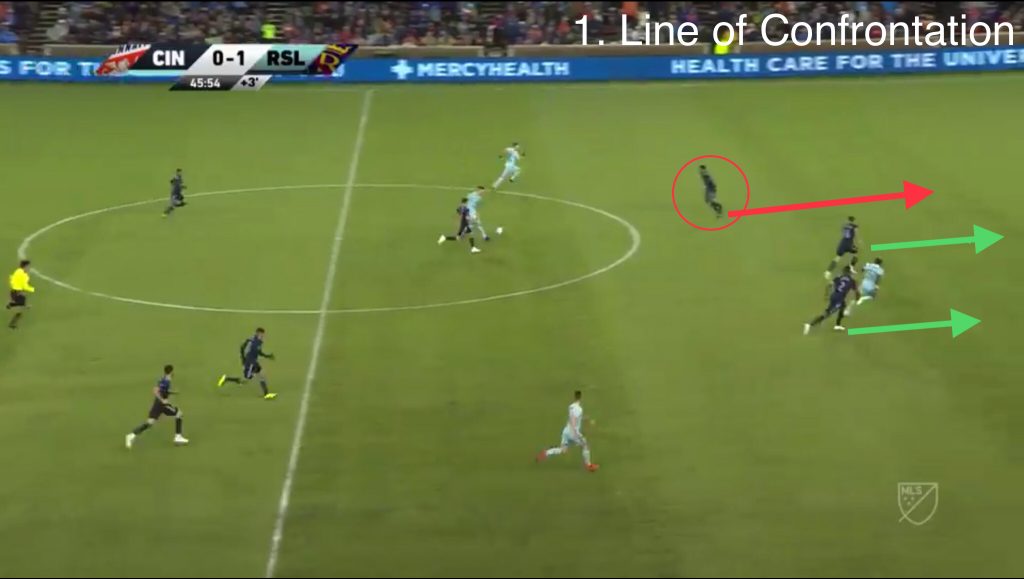 RSL’s second tally came soon after the first. It began with Rusnak dribbling on the counter-attack. The FCC defenders were well poised to prevent penetration, with Hagglund and Waston dropping furiously toward their own net. However, Powell chose to confront the ball near the midway line. In coach speak we call this the “line of confrontation.” This imaginary line is the point on the field at which you think the player with the ball is more dangerous than the player running beyond you. As Powell pulled up to stop Rusnak, he cooly played the ball to Corey Baird, leaving Powell in no-man’s land, and Waston and Hagglund on an island defending three against two. 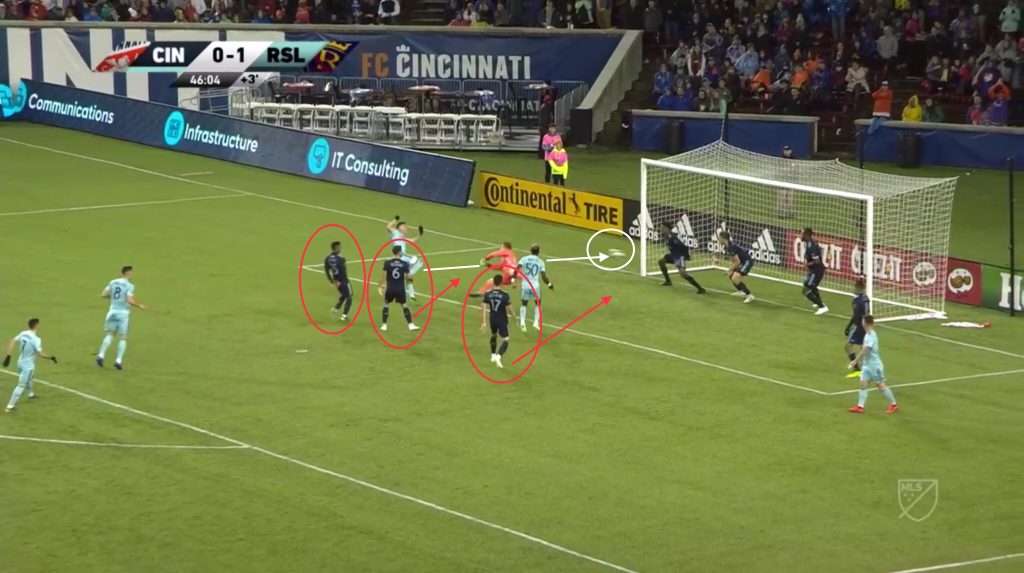 Defenders make mistakes, and Powell’s early confrontation was certainly one. However, this was not solely to blame for the Real Salt Lake goal. In fact, Spencer Richey stepped in to make a critical save and deny Damir Kreilach. As Richey made the save, Hagglund, Waston, and Powell crowded the goal line in behind their keeper. They were able to keep out the second attempt from Baird, but with Deplagne, Cruz, and Bertone looking on with the best seats in the house Sam Johnson was able to breach the FCC net with the third attempt. Had any of the three onlooking FCC players recovered towards goal Johnson’s attempt would at least have been more difficult.

Frustration Leads to a Needless Tackle 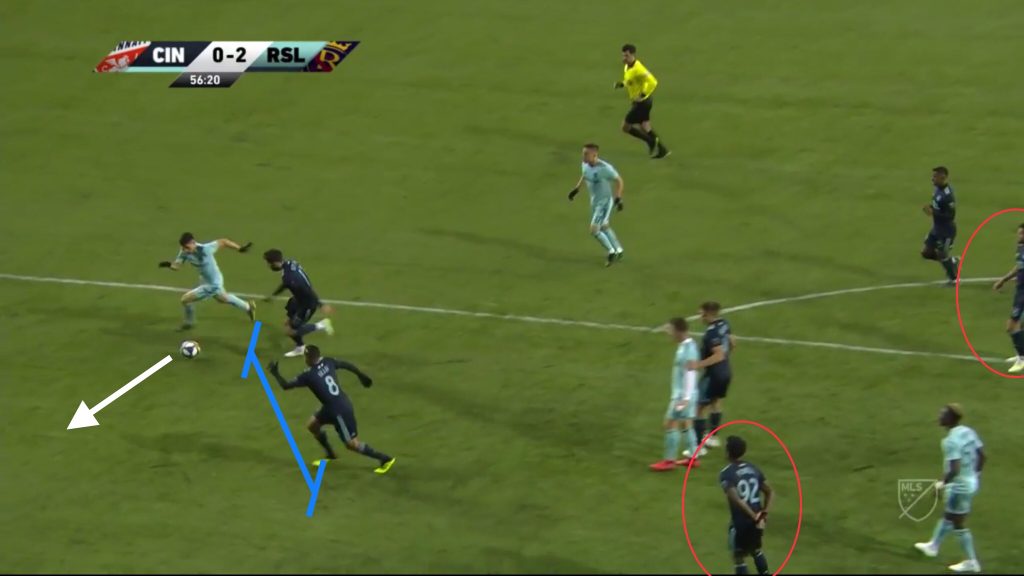 The final RSL goal came from the penalty spot, courtesy of a rash tackle by Mathieu Deplagne. As Jefferson Savarino picked up the ball and dribbled toward the goal line there was no need for Deplagne to make a challenge. Savarino was headed away from the FCC goal and Victor Ulloa was in a good covering position. However, Deplagne chose to attempt the tackle and needlessly fouled the RSL midfielder. Though this mistake rests squarely on the shoulders of the French defender, it is worth noting that both Bertone and Powell had already checked out mentally from the play and would have been of little help had Savarino been able to play the ball through the FCC penalty area.

The Mental Side of Losing

Making proper recovery runs, maintaining good positioning even when your team is in possession, and limiting unforced errors are keys to any game plan. These things certainly helped to sink FCC’s effort to pull out a much needed statement win in front of their home crowd on Friday. However, the simple act of ball watching and losing mental focus is the most troubling trend present in the FCC team at the moment.