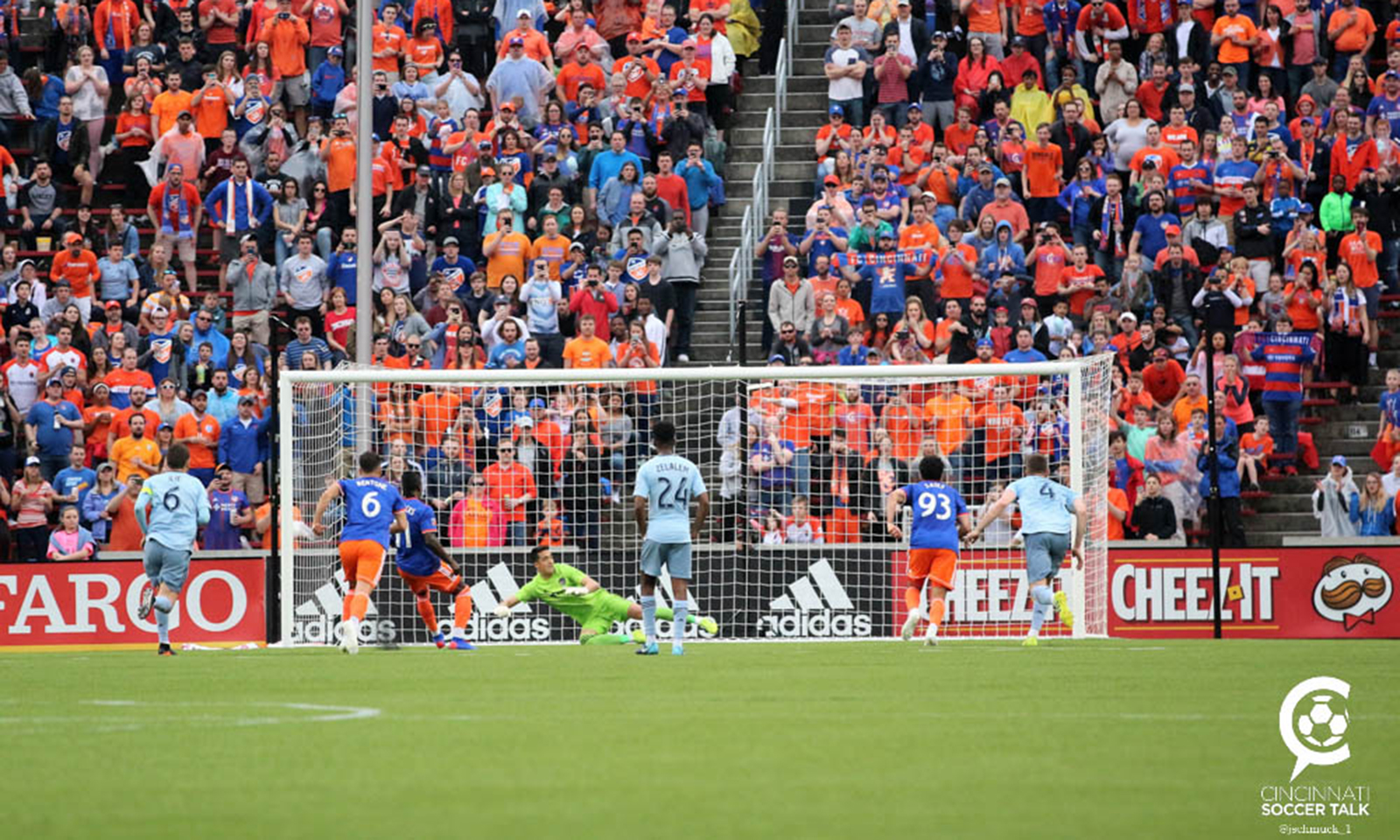 FC Cincinnati was aggressive early but conceded late in a 1-1 draw with Sporting Kansas City on Sunday at Nippert Stadium.

The good news for FC Cincinnati after its 1-1 draw Sunday at Nippert Stadium against Sporting Kansas City is the club created plenty of chances against a quality MLS side still in Concacaf Champions League play. The bad news is the depth up top is growing thin.

After an aggressive start leading to a Darren Mattocks penalty kick in the 19th minute, FC Cincinnati conceded in the second half. With limited options on the bench, coach Alan Koch made two defensive substitutions. The Orange and Blue stood tall to earn the point. They stand at 2-2-2 with eight points, in fifth place in the Eastern Conference table. Kansas City moves to 2-1-2 and sits in seventh in the Western Conference.

“We created a lot of opportunities,” Koch said. “Obviously you have to capitalize on those chances. I think we all knew we were very, very thin right now up front in terms of the options we have available for a variety of different reasons. To see us collectively create the chances through open play and set pieces was a very big positive step in the right direction.”

The first opportunity came in the first minute when Kenny Saief missed on service from Allan Cruz. Then in the 17th minute, Roland Lamah got past Kansas City goalkeeper Adrian Zendejas and was fouled in the box by defender Andreu Fontas.

Mattocks, starting for the unavailable Fanendo Adi, had four of the club’s six first-half shots, including three on target. Zendejas blocked one at point-blank range, and Mattocks bounced another off the post.

Mattocks said he doesn’t feel any extra pressure in the starting lineup while Adi is unavailable in MLS’ substance abuse and behavioral health program after an OVI citation last week..

“Any day, whoever’s up front (on the depth chart) has to do the job for the team,” Mattocks said. “That goes anywhere — from up top, or midfielders, goalkeeper. When your number is called, you have to be ready to take it.

“I’ll take the one (goal). As a team, I think we created a number of chances. Not just myself but a couple guys up front. On the bright side, we showed we can create four, five, six very good chances.”

FC Cincinnati’s attacking corps took another hit at halftime when Kekuta Manneh subbed on for Lamah, who had a tight calf. Koch said Lamah will get an MRI.

Kansas City started just three regulars after Thursday’s CCL semifinal leg match against CF Monterrey in Mexico. Those who coach Peter Vermes called upon against FC Cincinnati grew into the game quickly in the second half and threatened to equalize.

Spencer Richey made a point-blank save in the 57th minute on a Yohan Croizet shot after FC Cincinnati’s back line fell apart a bit.

Then Gianluca Busio played a through ball in the 62nd minute. Richey came charging off his line to the top of the box to try to snuff out the threat. But Busio slid past him and tapped the equalizer into an empty net.

“When I see Busio is in and with a lot of space, my instinct is I thought I could make a play on the ball before he got there,” Richey said. “I kind of got caught in between two minds when I was out there. I thought it was the right decision to come and try to affect it, but I just needed to be decisive at that point and put my foot through the ball.”

A big FC Cincinnati missed chance right before the equalizer suddenly loomed large. In the sequence prior, Mattocks crossed to Manneh, but the shot was wide right.

In the latter stages, Koch brought on Eric Alexander and Caleb Stanko, both defensive-minded midfielders.

With Adi unavailable and Emmanuel Ledesma picking up a knock in training, attacking options were limited. Emery Welshman and Rashawn Dally are out on loan.

“We wanted to try to win the game — create enough chances to try to win the game,” Koch said. “In the second half, give Kansas City credit, they turned the game on. They stepped it up a little bit. Their backs were against the wall. For a variety of reasons, I think at times we didn’t match that. But a big part of that was the substitutions we had at our disposal. You’d love to be able to use two or three attacking substitutions, but we’re a little handcuffed today in terms of how we managed the game. But we managed it and put players out there that we had confidence in.”