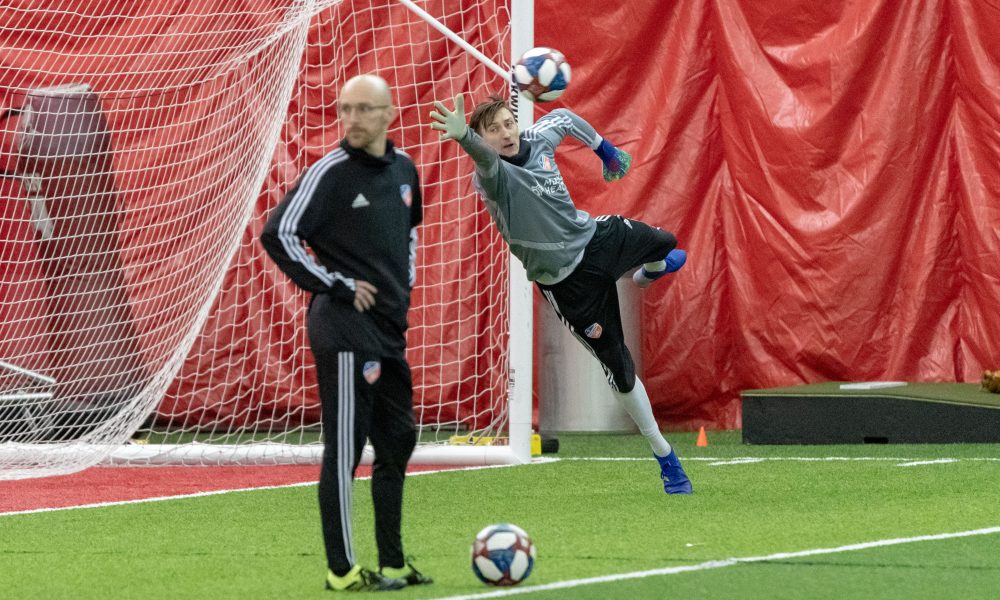 MILFORD – After Przemysław Tytoń leaped to his left with his 6-foot-6 frame fully outstretched and used both hands to deflect a sizzling shot during Friday’s training, assistant coach Pa-Modou Kah pronounced loudly “He’s back!” Well, not yet, at least not officially.

But there are indications that the Polish international will be part of the squad in some capacity when the club welcomes Sporting Kansas City to Nippert Stadium on Sunday.

“We had a brief chat at staff this morning in terms of would he be available? He has to get through today and tomorrow, so not sure just yet,” Alan Koch said after training on Friday morning. “It’s a huge week for him. It’s the first week he’s really come back and trained in consistent sessions. He’s come back and taken a huge positive step forward.”

Tyton’s physical attributes have been evident in training and even in moments during a season-opening 4-1 loss at Seattle in which he made five saves. Hamstring tendonitis forced Tyton to miss the previous four matches, during which time Spencer Richey has made a strong case for No. 1 keeper.

During Richey’s four appearances, FC Cincinnati went 2-1-1. His three saves and clean sheet in a 3-0 win over Portland in the historic MLS home opener at Nippert earned him a spot on the MLS Team of the Week. Richey also made a pair of saves and recorded his second straight shutout in a 2-0 win at New England on Mar. 24.

Tyton asked not to speak to reporters until he is officially cleared to play, which could happen by Saturday. His selection for the 18-man matchday roster or the starting XI is among a few tough roster decisions that Koch will face heading into this weekend with the squad now intact with a few players coming back from injury and international duty.

Defender Kendall Waston trained fully this week after missing last week’s match with a calf injury sustained, while midfielder Kenny Saief, who played only 31 minutes in the loss to Philadelphia, is expected to be back in the starting XI this weekend. With competition for minutes heating up and the schedule tightening, Koch’s message to the players on Friday morning was clear:

“We need everybody to be ready to play this weekend,” Koch said. “If you’re in the starting 11, embrace it. If you’re on the bench, embrace it. Get yourself ready. Even though we’re playing one game a week at this time, in a few weeks we have three games in a week. We use that as a little bit of a carrot. You want to have some tough decisions.”

Koch said Sporting KC’s 5-0 loss to Monterrey in a Concacaf Champions League tie on Thursday night does not change the way FCC evaluates or views them. Sporting’s 7-1 pounding of the Montreal Impact last week is something FCC players and staff have referenced on several occasions this week.

However, defender Greg Garza, who watched tape of that match with the team Friday morning, saw opportunities where FCC could exploit KC on the counter attack.

“We are a very transitional team, from winning the ball and getting forward as quickly as possible, that’s one of our biggest strengths of having that athleticism and speed that we have within this team,” Garza said. “Hopefully we can defend well in blocks and beat them on transition.”

There were no indications on Friday that Fanendo Adi’s arrest for operating a vehicle while impaired and subsequent suspension in accordance with MLS substance abuse policy is a distraction. After dropping points at home against the Union last weekend and with five of the next eight matches on the road, Garza stressed the importance of getting a result on Sunday.

“To me, home games are the most important in this league,” Garza said. “You look at the road games in this league, it’s kind of thrown up in the air with ties and more losses. (KC) have been one of the best teams within this league the past few years. The most possessive team in this league. They’ve been with each other for a very long time. Now they’re playing a brand-new team who has been together for three months. We have to focus on the defensive half and getting forward very quickly.”

Also on Friday, FC Cincinnati traded away one of its international spots to the Montreal Impact in exchange for 150K in general allocation money.

This trade gives FCC seven international spots for the 2019 season. There has been some questioning about whether or not FCC still has a spot available. This is because of a couple of the loaned players and their international statuses, such as goalkeeper Ben Lundt and expansion draft pick Hassan Ndam.

In point of fact, FC Cincinnati has a vacant int’l roster spot.

This trade is also interesting because some are wondering if FCC is going to make some more moves with this cash they just acquired. Will it move to get a forward due to Adi’s absence or another type of player? Technical director Luke Sassano seems to have been busy as of late, so does he have something in the works?

-Jacob Clary contributed to this report