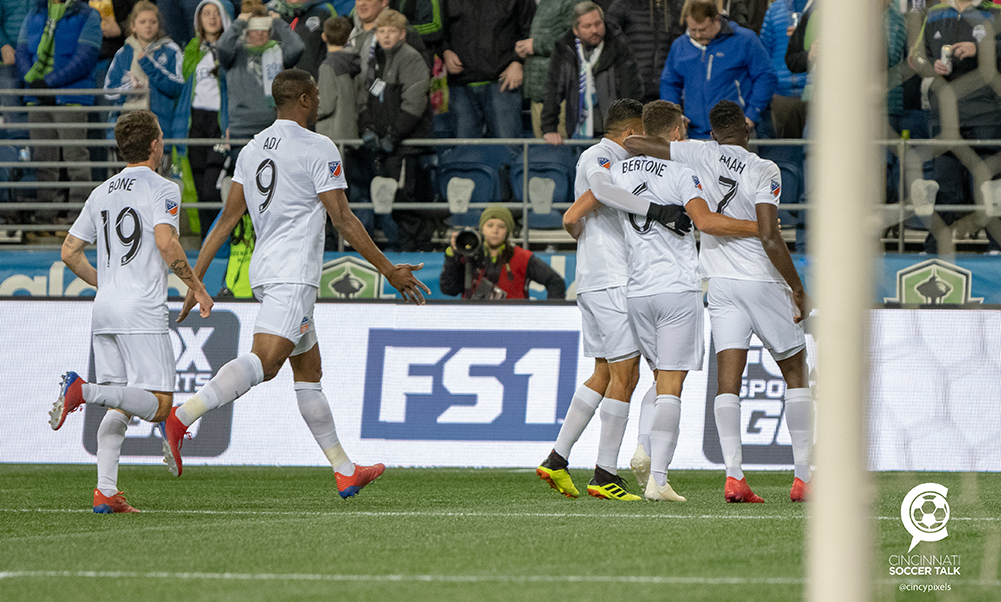 FC Cincinnati won its second straight match on Sunday, defeating New England 2-0 on the road. Here are our player ratings for the match.

Sunday afternoon, FC Cincinnati earned three points on the road against Brad Friedel’s New England Revolution. Kekuta Mennah and Kenny Saief were the goal scorers. In addition to our Match Report, we will recap each individual player performance for the match.

FC Cincinnati rolled out a 4-4-2/4-2-3-1 with Roland Lamah and Kenny Saief dropping into a line of four on defense with Leonardo Bertone and Victor Ulloa. Emmanual Ledesma got the start at forward but was often paired up top with Mennah.

Not much more you can ask of Spencer Richey. He only faced two shots on target but both came within seconds of one another and was critical in preserving the win for the Orange & Blue. You also have to credit Richey in keeping the back 4 organized and owning his box when needed. With 265+ minutes without conceding a goal, it looks like Richey has his hands firmly around the starting keeper spot.

Spencer Richey comes up with a double save to keep #FCCincy in front! 🧤#NEvCIN https://t.co/HpRAImjnAY

After starting at left back in the first three matches, Deplagne made his first start at his natural right back position and put up the highest Audi Player Index score in the match. Admittedly I didn’t know much about Deplagne and didn’t have high expectations heading into the season but he has been arguably FC Cincinnati’s most critical player solidifying the back line. He, Forrest Lasso and Nick Hagglund controlled the air and didn’t allow New England many quality chances.

You have to give Hagglund a lot of credit for the defense’s second consecutive clean sheet. With three changes along the back line (Garza-LB, Lasso-CB, Deplagne-RB) he needed to step up and make sure FC Cincinnati didn’t miss a beat. Two hundred sixty-five minutes without conceding for the group is a massive feat, especially for an expansion club. If there is one spot to see growth, it’s with his long passing. I understand the point in relieving pressure but I’d like to see continued improvement with him linking to Allan Cruz/Leonardo Bertone or the wings.

What a debut for the 2018 USL Defender of the Year. He led the match in clearances (11), t-1 headed clearances (five), and blocks (three). Between Lasso and Hagglund, New England didn’t have a path through the air to the goal. When the Revs kept it on the ground, Lasso was quick to step up and parried several chances away. His aerial duel late in the first half went straight to Mennah that sprung the opening goal for FC Cincinnati. After a few nervy minutes early in the match, Lasso has to give coach Alan Koch confidence that there won’t be much drop off if he has to give Waston or Hagglund a rest later in the season.

FC Cincinnati fans had a couple tastes watching Garza come off the bench the last two matches and in his first start, he didn’t disappoint. While he didn’t have as many up the field impact moments he’s known for, you can see why Garza was one of the first acquisitions for Koch and Co. His body positioning on the defensive side was tremendous, keeping the Revs off the ball in 1v1 scenarios. When players from international call-ups return, it will be interesting to see how he can work into the attack.

Ulloa again was one of the top performers on the night for FC Cincinnati. If you watch him closely, he does so many little things that pressure and frustrate opponents. He was key early on stepping in between Lasso and Hagglund when FC Cincinnati tried to build possession. When FC Cincinnati turned the ball over, Ulloa acted as a shield preventing any Revs counterattacks. He partnered well with Saief getting him forward on the attack at least six times. Outside of Richey, Ulloa has to be one of the first names Koch puts on the team sheet.

It’s hard after a clean sheet to say any players had an off night but if there was one, it was Bertone. He was solid on the defensive side of the ball but his passing was suspect at 63 percent, including 40 percent in the opposition half. With Saief and Ledesma ahead of him as new partners, I am going to give him a pass. At times there wasn’t much of an outlet to relieve pressure, but you’d really like to see better distribution for a player of his caliber.

Lamah had some fans worried early that he might be trying to do a little too much with some 40-50 yard chips of the New England keeper, but he settled down and put in another quality performance. The ding on Lamah during his time in Dallas was that he didn’t track back on defense. In four matches for FC Cincinnati, that could not be further from the truth. He consistently provided support on both sides of the ball. Saief and Mennah were the stars of the show Sunday, but if Lamah can continue to bring this effort every week, FC Cincinnati will be in the playoff hunt come the end of the season.

FC Cincinnati could not have asked for a better performance in Saief’s first MLS start. A goal and an assist on the night, Saief is leaving the impression early that FC Cincinnati needs to pick up the purchase option at the end of the four-month loan. His ability to control the ball and pick out passes is clearly toward the top end in MLS. Most thought he’d be the No. 10 after his signing, but it looks like he might be better on the wing with the ability to cut in to set up the offense. He’s played just over 90 minutes for the Orange & Blue, but there is a lot to like from what we’ve seen.

Without Fanendo Adi and Darren Mattocks, there were questions who would lead the point of attack for FC Cincinnati, and Kekuta Mennah stepped up emphatically. At many times he served as the only outlet to relieve pressure and sprung into the attack with the ball. In the buildup to his goal, he picked out the pass to Saief and then sprinted into position to knock in the cross. On FC Cincinnati’s second goal his inch-perfect pass to Saief was a beaut. To be fair, there were a couple of chances in the match where Manneh needed to get the ball out wide to Lamah that would have put him alone on goal. Hopefully, he’ll look at the video and pick out these passes in the future.

The 2018 USL MVP showed he at least belongs at this level with his creativity and his ability to keep up with the speed of play. He took several chances early and missed a couple of goals by inches. He was dangerous getting forward, leading the team in shots (three) but needs to complete a higher percentage of passes (64 percent) if he wants any chance to start. On a team that relies on its defense to succeed, Ledesma will have a role, as he’s not scared to take a shot. There will be moments this season where he will be critical, and today was a nice first step in MLS.

Making his first appearance since the season opener, Alexander came in at right midfield to lock up the match with FC Cincinnati up 2-0. He was efficient on the ball and helped make sure FCC left with three points.

The midfielder was subbed in the 80th minute for Emmanuel Ledesma. He was dropped deeper into midfield playing just ahead of Ulloa and Bertone and was solid in the role closing out the match. Tough to take too much out of the match for Stanko but every appearance helps after not playing much for Freiburg.

Bone made his second appearance of the season as a late sub for Kekuta Mennah.

Coach Koch is on a hot streak the last three games, getting positive results out of three different environments. This week he had a new set of challenges without his DP (Adi) and four key players (Mattocks, Powell, Waston and Cruz) to international call-ups. Relying on key USL players (Lasso and Ledesma) and giving Garza and Saief their first starts of the year, he was able to construct a lineup that would stay organized and frustrate the Revolution. Post-match he praised his players for playing “dirty” soccer to win the match. He can call it dirty, I call it pragmatic. Seven points in four matches puts his club tied for first in points in the Eastern Conference. I’m not calling it a lock for the playoffs, but it’s hard to imagine a much better start for the Orange & Blue.