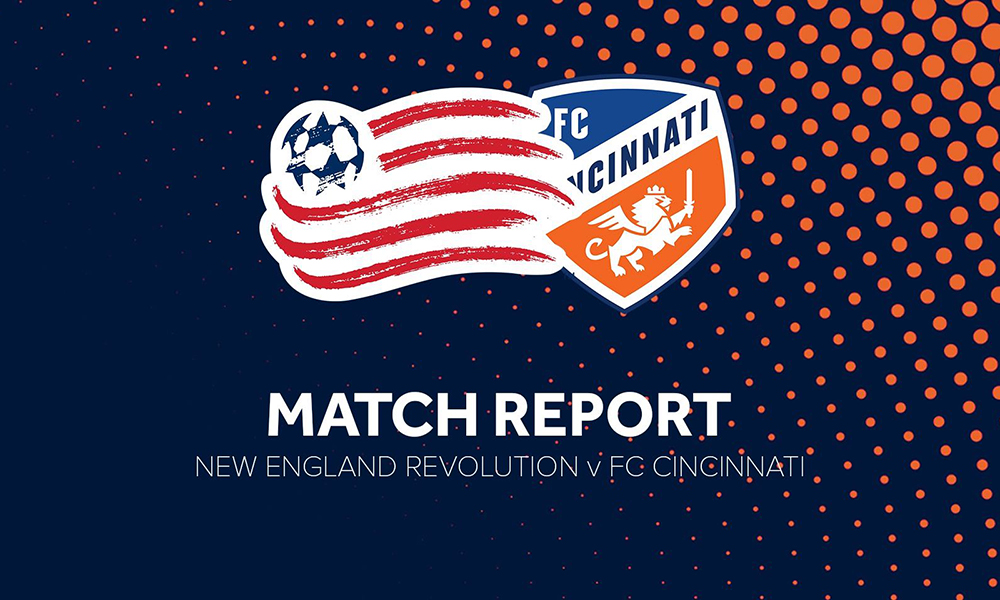 FC Cincinnati defeated the New England Revolution 2-0 for the club’s second straight win. FC Cincinnati is now in a three-way tie for first place with D.C. United and Columbus Crew, all with seven points. D.C. didn’t play this weekend and has a game in hand. Columbus suffered a 3-0 loss to Philadelphia Union on Saturday.

“It’s huge,” Head Coach Alan Koch said about the win in an FC Cincinnati press release. “Obviously, coming on the road and getting three points is a major achievement for our club. We just spoke to the guys on the field and we said, when you signed up for this project, you knew you were going to go through ups and downs, and we’ve gone through a lot of ups and downs already in the last few months, but, we also knew we were putting ourselves in a position where you could have a lot of historic milestones. Tonight, to come on the road and get our first three points in this league is, obviously, huge and I’m very, very proud of the group.”

The match started out very much in favor of New England. It wasn’t getting chances necessarily, but they controlled the pace of play for the first 25 minutes or so. It was able to build from the back and make the first part of the match quite nervous, but nothing too scary happened for the defense.

FC Cincinnati started to bring its attacking power into the game at around the 25th minute, and the team gelled very well. The attackers for FCC worked well together and knew what they wanted to do. Emmanuel Ledesma, Roland Lamah and Kekuta Manneh helped the whole attack transition much better. When the team went on a break, there was also more help from other attackers, which was one criticism for the team in their first three matches.

Ledesma also looked formidable every time his boot was on a set piece. His corner kicks are divine, and one free kick in particular almost went in the net but thanks to a save from the Revolution goalkeeper stayed out. His inclusion in the lineup needs to continue because he looked comfortable on the pitch playing with the others.

FC Cincinnati continued its attack on the Revolution goal and finally broke through thanks to Manneh in the 44th minute. Manneh took the ball and brought it forward near the box. Then he passed it out to Kenny Saief, who dribbled further. Saief was on the left inside the box and then passed it back into the middle. Manneh was there to capitalize and put it between Brad Knighton’s legs to give FC Cincinnati the 1-0 lead going into halftime.

“I’m happy but I feel like there’s a lot to work on still, FC Cincinnati player Kenny Saief said in an FC Cincinnati press release. “I just started so there’s still a lot of things to work on individually and as a team also. We’re very happy we took three points and we’re looking forward to our next game already.”

Halftime did not do anything to help the Revolution find their footing on offense. Most of their attack was still hampered by their inability to get the final pass or the final touch on the ball to actually get a good chance.

Meanwhile, FCC didn’t have much to go on in the half, but they used the attempts they did have wisely. In the 65th minute, Ledesma saved a ball from going out and kicked it into the box. Manneh was there to hit it near the six-yard line, and Saief finished the chance to give Cincinnati a 2-0 lead.

In the final part of the match, New England was taking its time trying to make something happen, but the FCC defense stood tall. Forrest Lasso, who made his first appearance for FC Cincinnati this season, had a tremendous match while Kendall Waston was out for international duty.

The match ended with a sputter. New England was unable to really do anything on offense. FC Cincinnati continued its winning ways with a 2-0 victory and travels home to the friendly confines of Nippert Stadium to face off against the Philadelphia Union. The Union just defeated the Columbus Crew 3-0.

There were many players who had outstanding matches, but Saief and Garza stood out. Saief was involved in both of the goals FCC scored, and scored one of them. His passing and creativity are exactly what the team needs to score goals from regular play. Saief is my man of the match. Garza also played great. This was the first match he started for FCC, and it was obvious why the club acquired him. He is an outstanding left back in both offense and defense.

The absence of multiple players from the club didn’t hurt the scoreline. I was worried the absence of players like Kendall Waston and Allan Cruz would lead to a bad match. However, the players proved me wrong with their great play. Ledesma and Lasso both played amazing. They also showed why they deserve to play more minutes even when the normal starters return.

Another part of the team I was worried about was the team’s ability to score outside of set pieces. They also shoved that aside and scored one from a set piece and another from open play. Manneh’s goal came from a break and Saief’s after a corner kick.