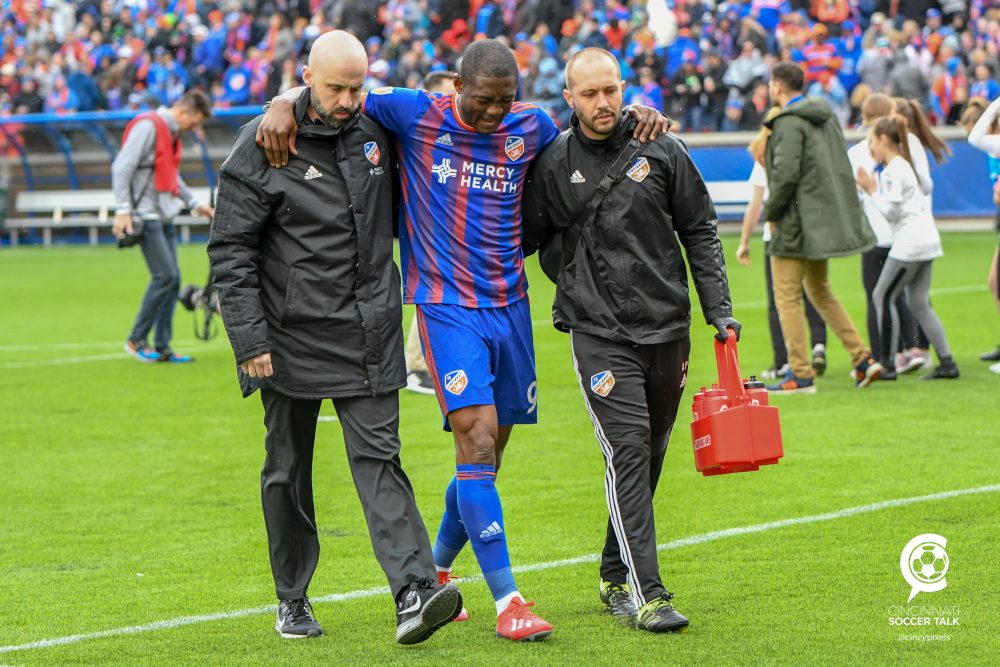 Before the season started, FC Cincinnati fans circled the New England Revolution match as a break in a brutal first ten match schedule.

Before the season started, FC Cincinnati fans circled the New England Revolution match as a break in a brutal first ten match schedule. The Revolution finished seventh and missed out on a playoff spot in 2017. Seattle, Atlanta, and Portland posed the bigger threat at the time. Looking back, it is easy to see some flaws in that logic. Portland is struggling without replacements on the back line and, of course, are burdened by a tough away schedule to start the season. What FCC fans likely did not see coming was five international call-ups for the weekend of March 30th and a minor injury to Designated Player Fanendo Adi.

Soccer is a game of adaptions. Not only does a team need to adapt to their opponent in a match, but they also need to adapt rosters for various situations. FC Cincy was just starting to find rhythm and consistency in its lineup. Throw all that out the window because four of the eleven guys that have started the past two weeks are playing for their home countries.  Allan Cruz and Kendall Waston are headed to Costa Rica and Darren Mattocks and Alvas Powell to Jamaica. Ironically, the pairs will play each other on March 26th at 10:00 PM. Alan Koch has his hands full this week.

New England will suffer the same fate but not as severe. Only three call-ups for the Rev’s and two do not impact the traditional starting eleven. This upcoming match is no longer the break Cincy fans desired. It is a real test of depth and coaching in the early season. The question is now, can FC Cincinnati get a point or better on the road with missing pieces?

Help Is On The Way:

The good news is that Greg Garza has received playing time two weeks in a row from substitutions. Garza, who was expected to be with the USMNT team, is healthy and ready to fill the void. Expect Garza to plug in at left back freeing up Deplagne for a move to right back. The only other missing piece on the back line is Waston’s replacement. Lasso is the natural fit in size but we wouldn’t be surprised if Koch shifted pieces around and fans could see a whole new style of play for this match.

The newest player on the roster, Kenny Saief, is also expected to make his starting debut. Saief quickly made himself known to the Orange and Blue faithful with an assist that earned FCC a point in Atlanta. It is likely Saief plays in the midfield filling the void left by Cruz. Again Koch may decide to restructure the midfield. On the most recent CST podcast, it was theorized that Mannah will be pushed up with Saief likely to play behind him.

Adi is injured and Mattocks is out. Cincinnati is short on strikers for this match and there has been no news about recalling one of the forwards out on loan. FCC will need to get creative to earn chances vs New England. So far this season Cincinnati has been able to score by pushing defenders and midfielders forward into the attack. This match may employ similar tactics with a completely different lineup. Expect to see a player like Emmanuel Ledesma in this match. How FCC plays up top may be the key to the match. If the Revs score first, Cincy will need someone to step up and answer.

It is an exciting season for FC Cincinnati and the match vs New England adds to the excitement. Matches like these are opportunities for players searching for a way into the starting lineup. It is an opportunity for Koch to find new ways to build his team going forward. The lineup released Sunday is likely to raise eyebrows but it will also show fans what kind of character the team has when they face adversity.

Check out our latest March to Matchday podcast. We talk to Six States One Pod and get more info on how the Revolution will play against FCC.