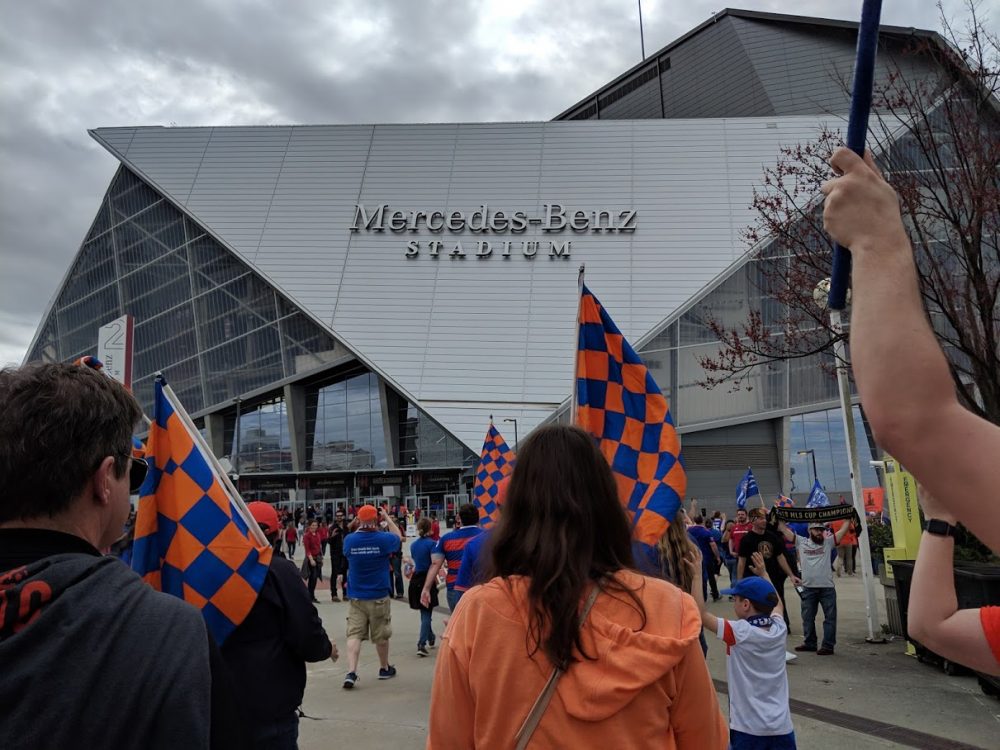 Just a couple weeks after FCC’s Atlanta United ticket allotment went on sale, they were sold out. The Bailey was headed to Atlanta and our staff would be headed down with them.

Just a couple of weeks after FCC’s Atlanta United ticket allotment went on sale, they were sold out. The Bailey was headed to Atlanta, and our staff would be headed down with them. Unlike Seattle, driving seemed to be the travel method of choice, and fans hit I-75 in droves. I passed, or got passed by, car after car with FC Cincinnati plates and magnets. It started to dawn on me that more of us were going this match than the 350 in an assigned section.

Once I hit Atlanta, it was obvious it was match day. Atlanta United billboards were everywhere, and even sponsors had put the logo on their ads. It was refreshing to see another city that has embraced the beautiful game as Cincy has.

Fans all gathered at a large sports bar with two floors called Stats Brewpub. By the time I checked into the hotel and made it over, the place was slammed. Hundreds of fans in Orange and Blue had taken over the place early to watch Arsenal vs Manchester United and the University of Cincinnati. For a moment, it was easy to forget what city we were in as it felt like home in there.

Hundreds of fans at Stats Brewpub in Atlanta pic.twitter.com/g3Z1fhfDEj

Atlanta fans were kind enough to invite supporters to their tailgates, and some opted to enjoy those and return to the bar for the march. Mayor John Cranley even stopped by the pub to show his support. Finally, it was time to march. Atlanta United requested that we show up early, but there was no shortage of United fans as we marched down the street. As we neared the stadium, the chants got louder, and the FCC group was so large that it was difficult to coordinate the songs from the front to the back of the march.

After we arrived, we entered the stadium and waited for the entire group to make it through security. The MLS security policies were not much of burden compared to what I am used to at Nippert, just the addition of metal detectors and supporters using clear bags. Entering the stadium went smoothly and swiftly as Atlanta seemed to be well staffed with polite and educated employees who knew we were coming. The fun then began as we sang all the way up the many escalators to the top of Mercedes-Benz Stadium. 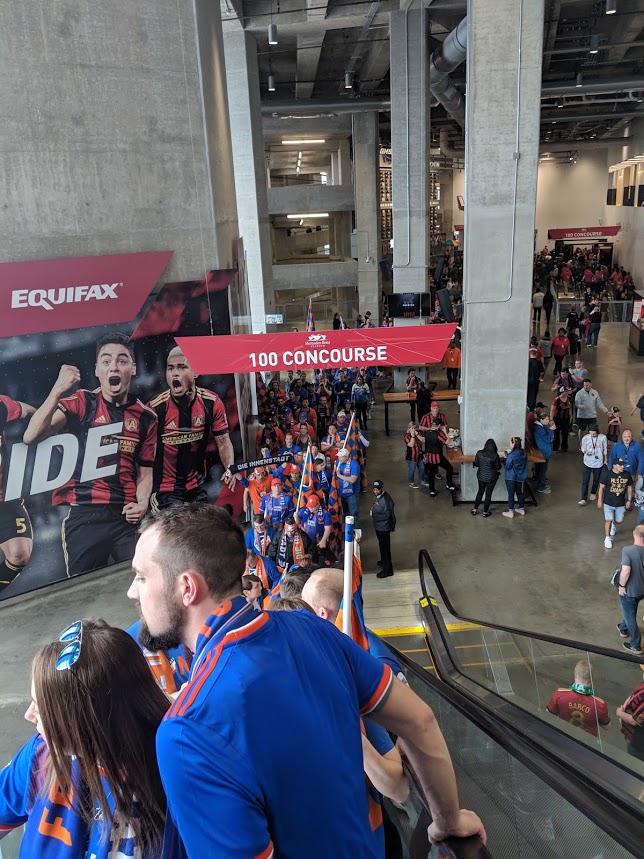 As expected, the stadium was massive with all the bells and whistles that more than one billion dollars can buy. The Benz was a far cry from matches in Harrisburg I have attended, and that we-are-not-in-USL-anymore feeling hit. We were excited; Atlanta fans flooded in after us, and soon the place was rocking as United unveiled their championship banners and played hype video after video.

The match itself was scary to watch. Cincinnati fans near me were optimistic, but that did take a hit after Martinez put away a goal early in the fifth minute. Our Capo’s rallied the section and we continued to chant for our guys in hopes they could hear us from distance. Cincy improved and Atlanta United entered the half still up by a goal. Fans took part in the affordable Atlanta concessions, and I got to talk with many people that came over to say hello from other parts of the stadium. Speckles of orange and blue could be seen throughout the dome, and it was neat to see more of us outside the one supporter section.

The second half was one of hope. FCC had chances, and each one generated more excitement in our top corner of the Benz. Adi finally scores and our section went wild until we realize it was called offside. We settled back in knowing that the door could be pushed open again. Koch put in his subs, and it worked. Finally, in the 85th minute, we got our moment. As Lamah silenced the stadium, we erupted. We had tied Atlanta United in their massive house, and we didn’t care who was watching. Hugs and high fives abounded, and a few minutes later, when it was over, we held our heads high. Stealing a point away was a large victory, and every traveling fan had smiles from ear to ear. We gladly waited the fifteen minutes for Atlanta fans to leave, and then we hit the streets to celebrate.